What is the Morphy Richards Homebake Breadmaker?

Morphy Richards Homebake is a mid-priced breadmaker. It has two settings for loaf sizes, three for crusts and 14 programs including wholewheat, gluten-free and fast bake, as well as 6-12-hour natural homemade yoghurt program.

A standard 60-minute keep-warm function applies to breads and cakes. The timer delay is up to 13 hours, including baking time.

The results were all good bakes, including basic white and wholewheat loaves, Madeira cake, banana-walnut bread and fast-bake white loaf. It’s a good all-round machine, and costs less than £100. 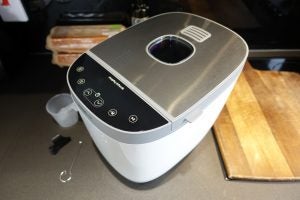 A brushed metal lid with a small window and an oval, white plastic body lend the Morphy Richards Homebake Breadmaker an air of sleekness and luxury. At 27.5cm wide (with handles) and 37.5cm deep, it’s fairly compact and easy to accommodate on a worktop. However, you still need 54.5cm in height to open the lid, plus a socket nearby into which you’d plug in the 78.5cm power cable.

A control panel with touch-sensitive buttons isn’t very responsive, requiring completely dry hands and a steady grip, which can be tricky. There’s no power button – at the end of each program, the manual suggests switching power off at the wall. 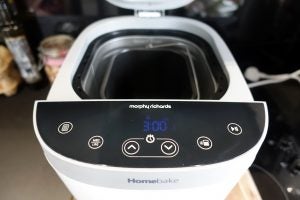 While the touch-sensitive buttons themselves are clear on the black background, the medium blue of the LCD screen is hard to read at certain angles. Even those with perfect vision may have to stick their noses right up to it. Perhaps a more conventional white, red or bright green would have been a more appropriate choice.

The manual is thorough and preaches precision at every turn, making it good for those who are new to baking. For seasoned bakers, its tone can become patronising at times: “You have to remember that when the ingredients combine with each other they produce a specific result.”

It does practice what it preaches, though, giving you a detailed breakdown of all the baking cycle times, separating kneading, rising and baking. The instructions also outline when the ‘add ingredients’ beep (for adding fruit and nuts after kneading) occurs, so there’s no need to stand around waiting.

There are thorough FAQ and troubleshooting sections, as well as helpful conversion charts for measuring ingredients. 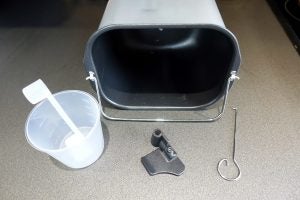 You get a choice of 25 recipes in the manual, and even a short section for preparing glazes to make your bread extra shiny. Measurements are provided in cups and are always supported by equivalents in grams or millilitres. Super-precise and efficient to boot – you’ll waste little time making your own conversions.

Accessories include a standard measuring cup, a measuring spoon and a hook for removing the mixing paddle in case it becomes stuck in the loaf. While the cup is marked for cups, millilitres and ounces, the spoon is just a standard 1tbsp or 1tsp. I ended up using my own measuring spoons when recipes called for ½ or ¼tsp of ingredients. 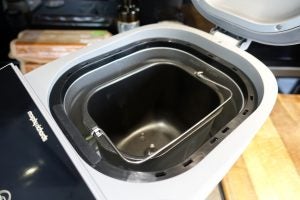 Morphy Richards Homebake Breadmaker – What’s it like to use?

I threw a lot at the Morphy Richards Homebake Breadmaker, and it coped brilliantly with everything.

I started by making a large loaf of basic white bread, which took three hours. Since the breadmaker is tall and narrow – not conventionally loaf-shaped – that’s how the loaf came out. More importantly, it was uniform in colour, with a soften golden crust.

Baked at the medium setting, the crust wasn’t crispy or tough, but it was substantial enough when toasted. Although there was a little bit of unmixed dough and flour on the outer edges, this didn’t affect the flavour of the bread.

During the baking process, the metal top got very hot to touch. Eager faces (read: kids) wanting to follow the baking progress from the tiny window should keep their distance. 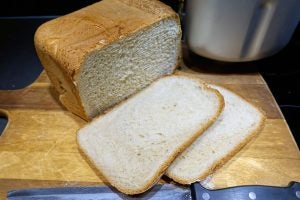 Next up: the Madeira cake. This was evenly baked and delicious, although there was a moment of confusion regarding the baking time. The otherwise precise manual didn’t specify which cake program time (3hrs 5mins or 3hrs 20mins) to follow.

I opted for the latter, prepared to pull the plug earlier should the cake start looking too brown on top. The cake didn’t burn, but its golden crust turned out a little on the thick side. In hindsight, 3hrs 5mins would have been enough. 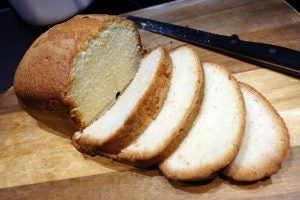 As for the wholewheat program, it delivered a lovely loaf in 3hrs 40mins, with a good rise and just a smidge of unmixed dough on the side. The texture was even on the inside and it tasted good toasted. 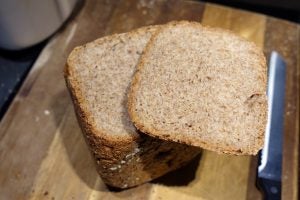 Next, I made a banana and walnut bread with the 1hr 40mins Quick option. It came out moist on the inside, with an even spread of nuts. 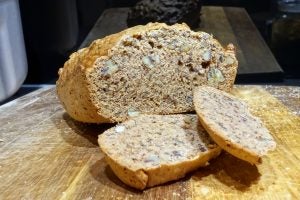 A fast-bake white flour loaf took 1hr 20mins, even though the instructions confusingly say it’s 1hr 15mins. The result had a nice shape. The crust came out soft and thin, making it a good bread for sandwiches and for those who don’t like a thick crust. Even on the inside it was only marginally denser; this loaf was just as good as the plain white baked at 3hrs. 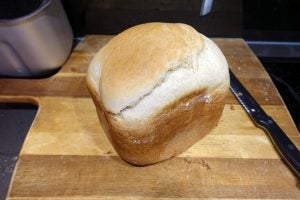 Overall, the results I had with this breadmaker were great, making the mid-range price well worth it.

If you’re on the market for a mid-range breadmaker, the Morphy Richards Homebake is versatile and makes consistently good loaves.

Compared with the similarly priced Kenwood Bread Maker BM260, the Morphy Richards Homebake features a greater number of programs. However, it doesn’t have the separate seed-and-fruit dispenser and the range of recipes offered by the more expensive Panasonic SD-ZB2502BXC.