What is the Morphy Richards Easy Blend Deluxe?

Compact blenders have been quick to provide a solution for the health-conscious member of the household, but the Easy Blend Deluxe has taken a broader approach. Instead of including only a couple of cups, it comes with five.

Also in box are a couple of drinking straws for sipping. The combination of a jug, filter attachment and tamper also see the Easy Blend Deluxe transform into juicer capable of tackling a variety of soft fruit.

A dual-grinding blade and quad-blending blade mean it can be used to make dips and rubs, as well as blitz seeds, nuts and ice. Less health-centric but more fun than most, its recipe booklet lists tasty smoothies as well as pastes, marinades and mocktails. 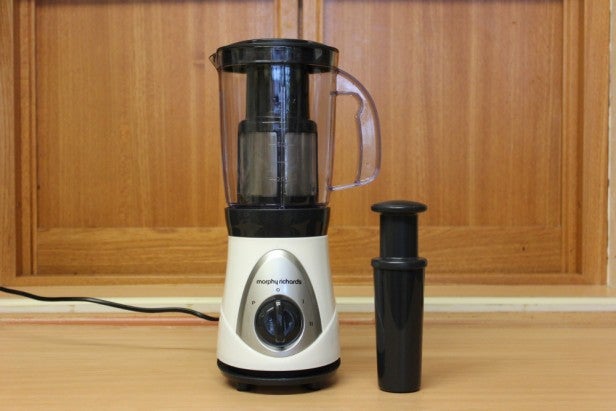 The Easy Blend Deluxe scores points for its diminutive proportions. Its base unit is ultra-compact, and were it not for the wealth of accessories, it would be a cinch to store.

At 300W, its motor is half the power of comparable machines, which means harder foods may take a little longer to blend, but it gets the job done. While the design of the white and silver base isn’t the most exciting, it’s functional, with two speeds and a pulse giving flexibility over smoothie consistency.

Five cups, a jug and two blades screw together in various combinations to suit the task at hand. Rather than a push and twist motion to operate, the Easy Blend Deluxe functions more like a traditional blender, a blade and cup combination locking into place with the speed controlled by a front dial. After blending, each cup can be topped with a screw-on flip-top lid or perforated lid and straw, so you can enjoy drinks on the go. 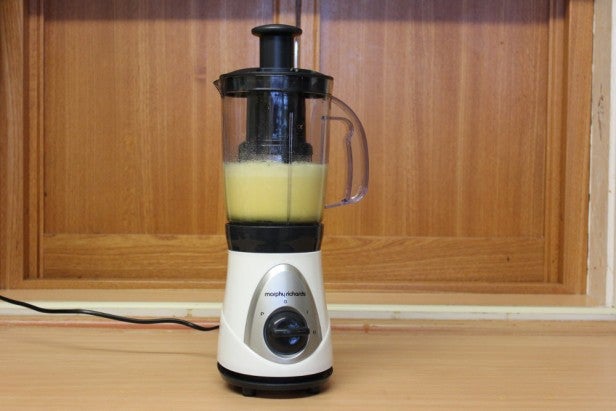 Morphy Richards Easy Blend Deluxe – What’s it like to use?

As a result of its numerous parts, getting to grips with the Easy Blend Deluxe took a little longer than similar models. However, the recipes included make it simpler: each specifies which blade and cup to use as well as adapting quantities for the 750ml and 500ml cups where applicable; it also offers advise on which speed to use.

I started by using the juicing jug, quad blade, filter and tamper to make orange juice. The filter fits snugly inside the jug once the blade is screwed in at the bottom, and the whole twists onto the base unit and is topped by the lid, with the measuring cap removed.

Adding oranges while the blades were running on speed 2, the Easy Blend Deluxe blitzed the pieces quickly, the juice being squeezed through the filter into the jug with no need for the tamper. Pouring out the juice without getting pulp in it from the filter was tricky, so it was best to process in small batches. Two oranges yielded half a glass of sweet, smooth – although very foamy – juice. 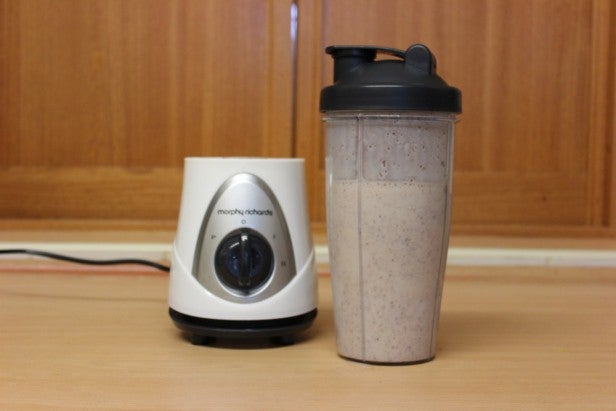 Next, I tried a recipe for a chocolate banana smoothie. In the 750ml beaker with the quad blade I placed chunks of chocolate, yoghurt, milk and a banana. After blending on speed 2 for 30 seconds, the chocolate was almost completely incorporated, with some flecks visible and a couple of larger pieces remaining. Liquid enough to drink through the sports lid, the smoothie was well blended otherwise. The cap of the sports lid also folds completely back so it’s easy to drink from.

Adding pineapple juice, coconut milk, sparkling water and ice to a 500ml beaker with the quad blade, I then made a Pina Colada mocktail. After blending on speed 1 for 30 seconds, the ice was thoroughly blitzed with no shards remaining. While the instructions advise against blending ice on its own , it was reassuring to see that the Easy Blend Deluxe performed well at blending it in a drink.

I finished by testing the grinding capabilities of the dual blade in the 300ml beaker, filling it with linseed. Using speed 1 to retain greater control over the grind, I then used the pulse to achieve a finer, powdery consistency.

While cups and lids are dishwasher safe, the rest of the components need to be cleaned by hand. It would have been useful to have a brush for the filter, but otherwise, there were no awkward corners. 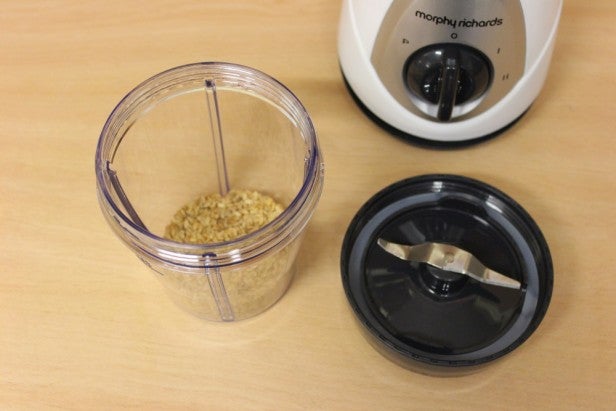 Should I buy the Morphy Richards Easy Blend Deluxe?

It might lack the power of similar appliances, but the Easy Blend Deluxe is a great package nonetheless. Compact enough to squeeze into a small space, the ability to make juices is a handy added extra.

In addition, you’ll never be short of a beaker, making the Easy Blend Deluxe a real family favourite. Also its simple recipes incorporating everyday ingredients will ensure that it will get plenty of use in almost any home.

Affordable and packed with functionality, the Easy Blend Deluxe is more than just a smart smoothie buy.