What is the Morphy Richards Accents Espresso Maker?

The Morphy Richards Accents Espresso Maker is a petite coffee machine that looks good, is fairly easy to use and convenient to boot.

If you’re after a casual coffee maker that doesn’t command too much space on the worktop, this would be a good choice. However, there are a few options out there better for real coffee fans, especially if you’re not too worried about getting a machine with a flashy look.

You’ll find the Morphy Richards Accents Espresso Maker on sale for around £100, although if you’re lucky you may find it for as little as £70. 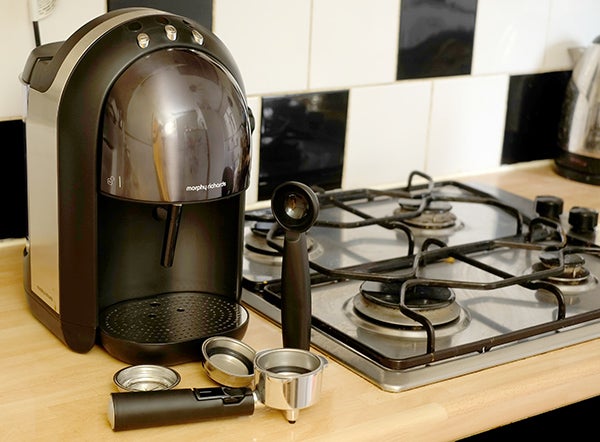 The more expensive coffee machines get, the larger and more imposing their designs become, speaking generally. And those among the lower leagues tend to feel a little cheap.

The Morphy Richards Accents Espresso Maker is a pleasantly dinky little machine, but it doesn’t feel like a cheap piece of tat. There’s a neat curved circular dome to the front that is made of metal, when a lot of models around the £100 mark are often all plastic.

It’s a cute machine, which is just what many people are after. 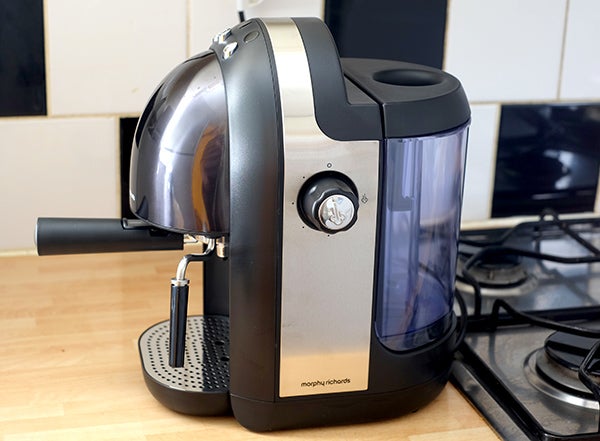 The Morphy Richards Accents Espresso Maker is also reasonably flexible given its size. As with most espresso makers, the nozzles that fire out the coffee are a little too low for full-size mugs, but you can fit slightly smaller ones under there: not everything but tiny espresso cups is barred.

We also quite like the how the reservoir works. It’s a 1.25-litre plastic jug that slots into a groove on the back. As the Accents machine is a lot shorter than some espresso machines, you should be able to easily yank the thing out without moving the machine. 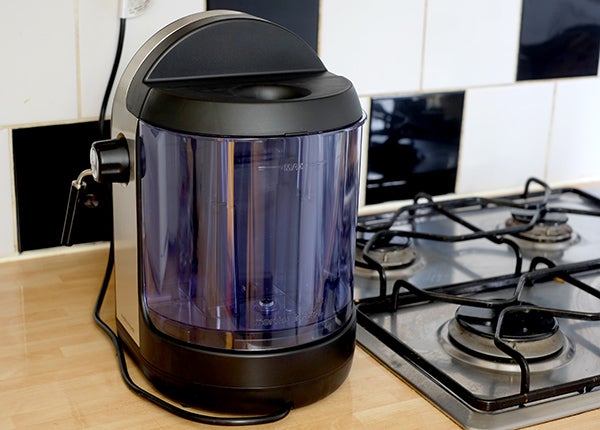 Alternatively, there’s an opening on the top you can simply pour more water into. Its design is deliberately dust-resistant, too. It’s perfect if, like us, you crave a nice, laziness-friendly machine about 80 per cent of the time.

The Morphy Richards Accents Espresso Maker sucks water in right from the bottom of the reservoir, meaning there are no pesky tubes to worry about. This is a very low-fuss system. 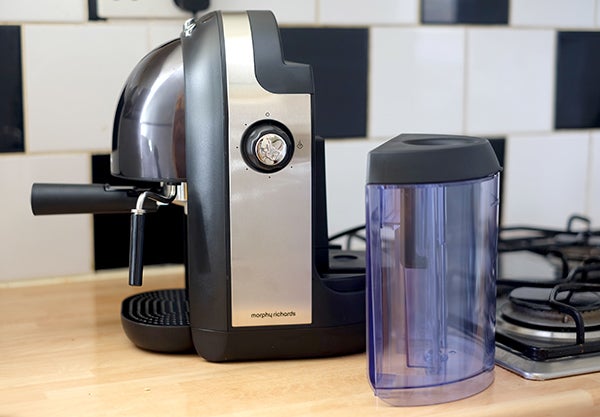 It doesn’t offer much in the way of bonus features, though. There’s a coffee holder and a milk frother. The latter can’t output hot water as well as steam, meaning the Morphy Richards Accents Espresso Maker isn’t very Americano-friendly.

We’re also not convinced by the design of the frother. Like most, it invariably spurts out a few blasts of water before outputting steam, but you can’t actually direct it into the drip tray while the coffee holder is in place. The spout just doesn’t tilt sufficiently. You either need to be happy to let a little lukewarm water fire into your milk jug (one is not included) or have a second cup at the ready to receive it. That or remove the coffee holder every time you use the frother.

This is a side effect of the Morphy Richards Accents Espresso Maker being quite as small as it is. The frother also doesn’t extend as far we’d like. If you just want a small amount of milk to top off a single cappuccino, the frother may not actually reach the bottom if you have a normal, full-size milk jug. 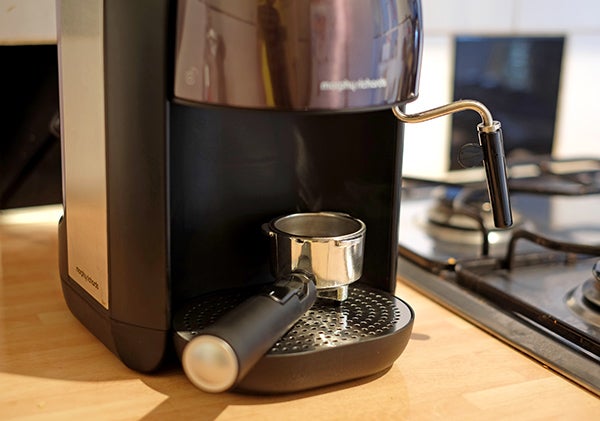 What’s the Morphy Richards Accents Espresso Maker like to use?

The Morphy Richards Accents Espresso Maker is operated using three buttons and a steam knob on the side. All three buttons sit in a line on the top, and control power, the coffee output and steam preparation. There are little LED light panels above each to tell you when they’re ready.

Little white LEDs fire up to let you know when the steam and hot water are at temperature. It’s advisable to wait, because otherwise you’ll end up with a crema-ruining less-than-constant stream of coffee or a frother that spits out warm/hot water for 20 seconds before actually outputting steam. 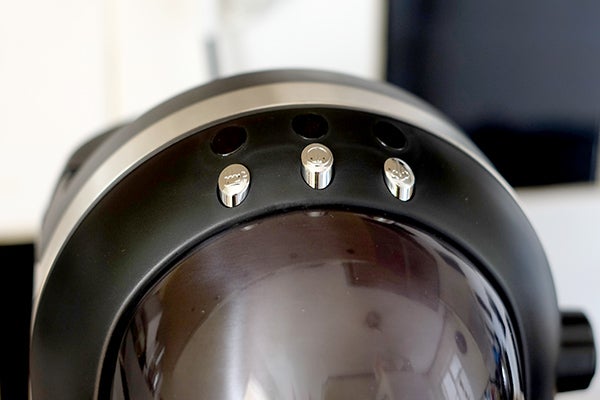 It takes a couple of minutes to prep the coffee, and it does seem you need to actually depress the steam button to avoid having to wait for steam to be produced, even if you’ve just heated up hot water for coffee. However, any quibbles are just things you need to bed into. We experienced no lasting operational quirks with the Accents Espresso Maker beside those of the steam wand.

The Morphy Richards Accents Espresso Maker does not auto-tamp your grounds, though. Tamping is where you depress the coffee grounds in the arm – the metal holder that slots into the main body of the espresso machine. A basic plastic tamper comes bundled, but we found that it’s not too picky about coffee prep. A quick press using the tamping tool will do. 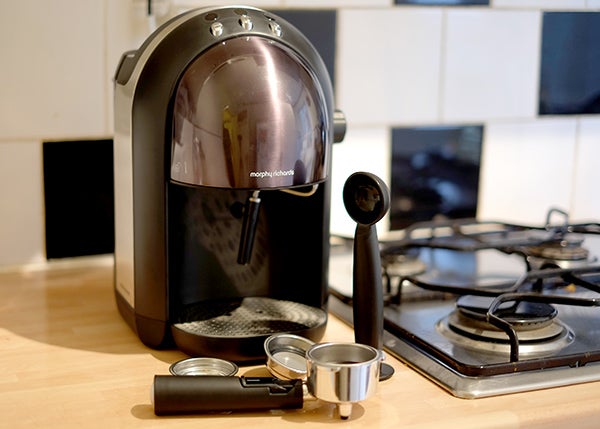 Three different coffee inserts are included too. These are little metal filters that slot into the coffee holder to suit different amounts of coffee. They fit rather loosely, but this didn’t cause us any problems once we’d learnt not to simply thwack the coffee holder in the direction of the bin when cleaning up. The filter will just fly in there with the grounds if you do.

There’s no cup warmer on the Morphy Richards Accents Espresso Maker, though. Often a metal plate is placed roughly above the heating element to provide somewhere to keep your cups warm, but there’s no such thing here. 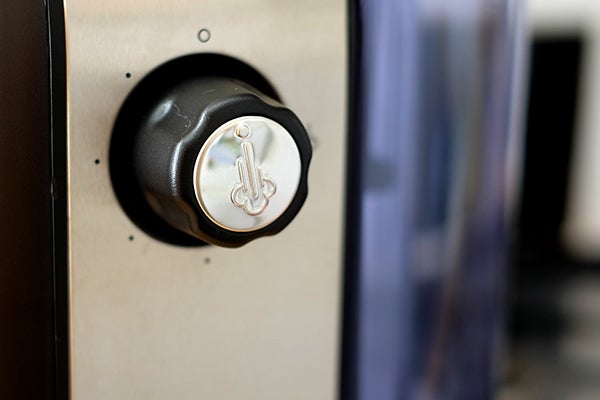 For the first chunk of our testing, the Morphy Richards Accents Espresso Maker left our coffee with a slightly plasticky taste, as if it had been filtered through a baby’s bottle. It’s a sign of the sort of internal plumbing the machine uses, but the tainting will die down after a short while if you use the machine regularly.

What stayed consistent, though, was the rather odd approach to crema creation. Crema is the brown/cream layer produced in the preparation of a good espresso, and Morphy Richards seems to use techniques here to really maximise it. And not really for the better. 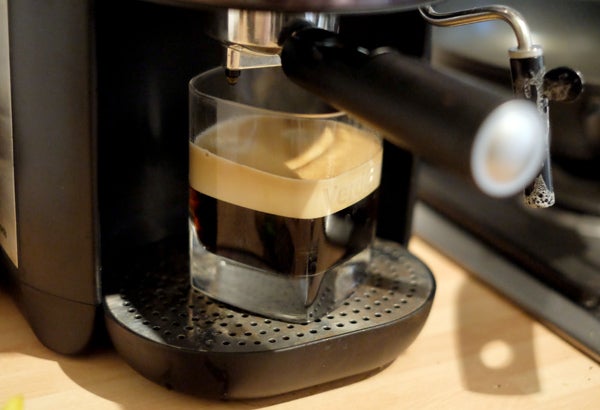 The crema looks good: thick, and dark should you wait long enough for the machine to get up to temperature to ensure a nice smooth stream of coffee. However, get your mouth around it and you’ll find it’s strangely frothy. It’s much closer to what the top of a cappuccino is like. An espresso should not really be like this.

Get past the top layer of froth and the Morphy Richards Accents Espresso Maker’s coffee is generally sound, although the very small surface area of the coffee holder is best left to produce one coffee at a time. It can tend to taste slightly thin unless you’re careful. 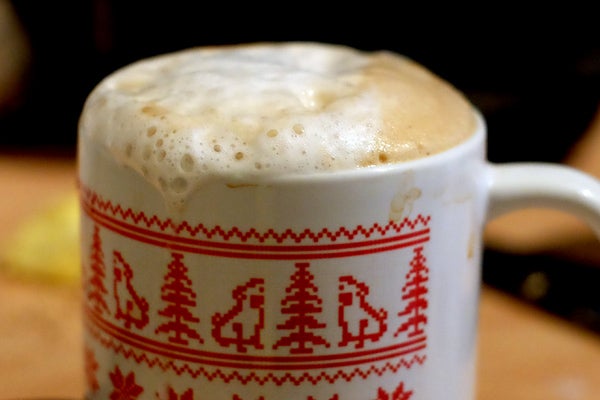 Like froth on your latte? You’re in for a treat

Just as the coffee is frothy, when the steam spout is up to speed can produce plenty of milk froth in just a handful of seconds. So much, in fact, that we found we needed to be careful not to let too much into a cup of latte to avoid ending up with half a cup of frothiness. All these elements can be worked around once you get used to the machine, though. 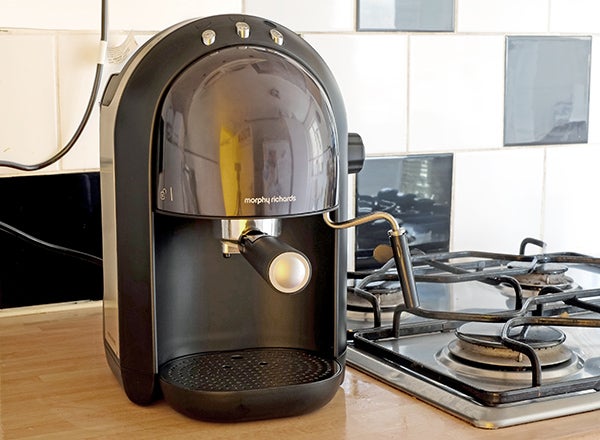 Should I buy the Morphy Richards Accents Espresso Maker?

The Morphy Richards Accents Espresso Maker is a cute, small and fairly easy to use coffee machine that we can imagine looking just the part in the kitchens of many coffee fans. We’ll admit to liking it a bit more than the Russell Hobbs Allure machine, which seems like an obvious rival.

However, more serious coffee fans working with a fairly tight budget may be better served by a similarly priced Krups machine such as the Krups XP5210, reviewed last year. It’s not quite as pretty but has a slightly more professional style and avoids the frothy crema issue that came to characterise the Morphy Richards Accents Espresso Maker’s coffee.

It may not be for serious coffee fans, but the Morphy Richards Accents Espresso Maker is cute, small and practical.