What is the Morphy Richards 400505 Total Control?

Designed to give inexperienced cooks more confidence in the kitchen, the Total Control Hand Mixer’s mission is to unite versatility with precision.

To that end, it features not only a speed control dial, but a trigger that allows you to mix slowly, give a rapid blitz or on-demand pulses. In a similar way to cruise control in cars, when you’ve found the right speed, there’s a lock button to secure it so you can take your finger off the trigger. Tools for whipping, mixing, beating and kneading, a neat silicone sleeve at the back for cord storage, and a cleverly concealed tool release at the front seal the deal.

Built to match the rest of the Total Control range, this hand mixer is only available in black and white – but it’s no less stylish for it. Most of its features are located in the soft-grip handle, with a chrome-effect five-speed dial at the end. The variable speed trigger sits beneath and the pulse and lock buttons can be found on top, all within easy reach of a thumb. Plus, thanks to its Smart Response Technology, the motor has a soft start that helps to ease it into any mixing task. 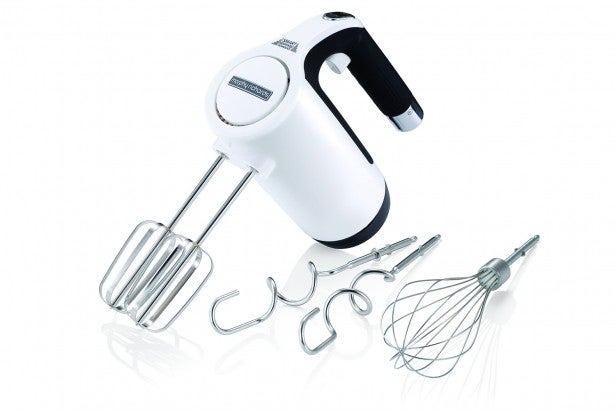 Each set of tools pushes into the attachment slots on the mixer’s body, with only the dough hooks needing to be inserted into corresponding holes, indicated by a ring on the stem of one. The power cord can be wrapped around the back of the mixer’s body when not in use, and is held in place by a silicone sleeve. This is also a handy feature to keep the cord out of the way by shifting it left or right as you’re mixing.

Reinforcing its suitability for newbie cooks, there are recipe ideas included for starters and main meals, as well as the usual baking tasks and more on the Morphy Richards Cook and Create app.

Where the Total Control Hand Mixer differs from similar models is that its recipes provide a good level of guidance on how to get the best results for different foods.

This came in handy for our first recipe: a simple white loaf. Rather than using the dough hooks by themselves for making bread – a tool with a maximum run-time of three minutes – it advised mixing with the beaters initially to combine the ingredients.

Adding flour, butter and yeast to a bowl, we used the Total Control Hand Mixer to combine the ingredients for about 20 seconds on speed 2 to form a breadcrumb-like uniformity.

Then, swapping the beaters for the dough hooks, we added water and mixed on speed 2 for about a minute until the mixture had come together to form a ball. We could then use the dough hooks to knead on a lower speed for a further minute, which the Hand Mixer coped with well.

Getting the hang of the motion required for kneading was tricky at first, since the dough would often spin away from the hooks, needing to be moved around the bowl more. Even so, this was far faster and less messy than kneading by hand. The dough rose well while proving, although the resulting bread was more dense than expected.

Next, we attempted the chocolate sponge cake recipe using sugar, margarine, eggs, flour and cocoa. Placing all the ingredients in a bowl, we initially used the beaters on speed 2 to mix for a minute.

This first mix spun a small amount of the dry ingredients out of the bowl, despite the soft start, but the beaters soon began to bring the mixture together, eventually forming a dense batter.

Despite the thick texture of the mix, there was no straining or struggling from the motor, even when we turned up the speed to 3 to whip the mixture to a smooth consistency. The beaters have a maximum run-time of six minutes, and given the mixer’s efficiency, there’s little need to go beyond this. After baking, the sponge was springy and well-risen.

We finished by using the whisk attachment to whip double cream on speed 5. This is where the lock function was most useful, as there’s no need to vary the speed with this task. However, it’s also handy to prevent accidentally altering the speed control when holding the handle.

After two and a half minutes, the cream had been whipped to a soft, spoonable consistency. All the attachments were easy to eject simply by pushing on the front of the mixer, and all are dishwasher-safe and easy to clean by hand, too.

Should I buy the Morphy Richards 400505 Total Control Hand Mixer?

This hard-working hand mixer has plenty going for it. It’s fast, light enough to hold for more than a minute, and can be tidied away easily for storage. As well as powering through thick mixtures, one of its most appealing qualities is that it adapts to the user. As a result, whether you’re new to baking, want more help with everyday mixing or are a confident cook, its variable speeds and versatility are a big plus.

The only downside is that it isn’t available in a variety of colours.

Small but mighty, with a can-do attitude, the Total Control is much more than a handy baking helper.