Small kitchens rarely have room for a stand mixer, so the biggest appeal of the Morphy Richards’ Total Control Folding Stand Mixer is that storing it shouldn’t be a problem.

By rotating the head backwards and dropping down the controls, the mixer folds in on itself. This brings it down to a third of its height, before a cover slots over the whole lot, ready to be neatly stowed in a cupboard.

The bowl and three sets of attachments will need to be housed elsewhere, but as far as storage goes, it easily beats having a bulky static machine clogging up worktops if space is tight.

Since the design centres on the machine’s ability to fold up, the Morphy Richards does look a little different from regular stand mixers. It’s boxier and more utilitarian, but for all that, there are still some smart touches, such as a chromed trim and illuminated buttons.

Its controls consist of a dial with six speeds, two buttons for the preset egg white-whisking and cake batter programmes, plus a start and pause button. Also included are buttons for releasing the attachments and one for unlocking the stand so it can be folded. 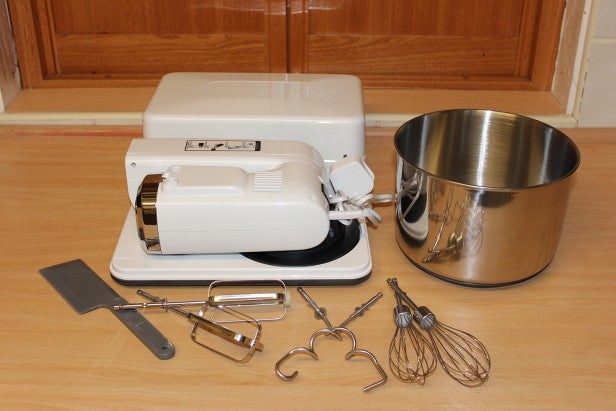 Three attachments – whisks, beaters and pastry dough hooks – slot into the head with a push. Where it differs from other machines is in how it mixes. While most have attachments that move around a static bowl using a planetary motion, here, it’s the bowl that rotates (with the option to rotate it manually in either direction).

Setting up the mixer is straightforward, thanks to directions on the machine. It unfolds, clicks into place and is ready to use in less than a minute.

We started by connecting the beaters and using the automatic cake batter programme (a two-stage, 4mins 30sec programme on speed 4 with a built-in pause after 30 seconds) to make a sponge cake. Note that the programmes can also be paused at intervals to add ingredients or scrape down, which is handy.

Adding softened sugar and butter to the bowl, we started the programme to cream the two together. While the ingredients within reach of the beaters combined well, those that had been thrown to the side of the bowl, and in the centre, didn’t. The programme had to be paused to scrape these back towards the beaters so that they were also creamed. 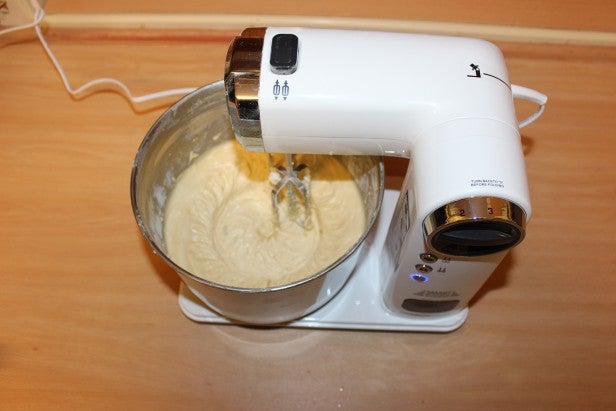 A little frustratingly, the pause and automatic programme buttons have the same blue illumination round the buttons, so the first time I pressed the auto programme button again, instead of pausing, I ended the programme. Before all the mixture had been beaten to the desired consistency, the automatic pause had kicked in, so some of the remaining time needed to be used for this.

Once sufficiently combined, I added the flour and eggs and continued the programme, again having to pause to scrape down the bowl. No splashguard meant there was also some flour puff.

The programme ended before the mixture was fully combined, so I had to use the manual speed control on 3 to finish. The baked sponge rose well, but it had a slightly heavier texture than usual. 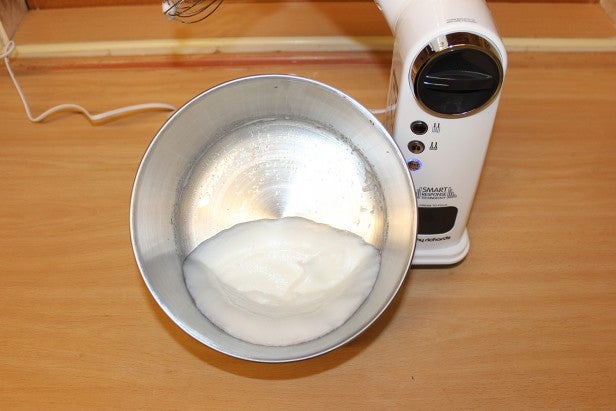 Next, I tried the automatic egg white whisking programme. This has no built-in pause but is a two-stage programme of 10 seconds on speed 4, then moving up to speed 6 for 2mins 40secs. Using the whisk attachments, I placed three egg whites into the bowl and set the programme going, rotating the bowl counter-clockwise and clockwise as advised.

Once the time had elapsed, I checked the consistency of the egg whites. While fluffy at first sight, they weren’t quite whipped enough for meringue. Tipping the bowl to one side, the egg whites slid. Running the programme for a second time produced better results; the whisked egg whites remained static and peaked when the bowl was tipped.

We had hoped to make bread dough with the dough hooks, but the manual stated that they were suitable only for pastry, not heavier mixtures such as bread. The bowl and attachments are all dishwasher-safe and also easy to clean by hand, so tidying up afterwards is simple. 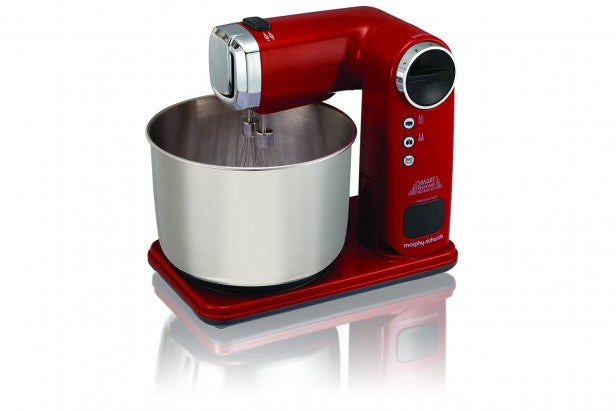 Should I buy the Total Control Folding Stand Mixer (400405)?

The Total Control Folding Stand Mixer lacks the power of a regular stand mixer, but if it’s replacing a hand whisk then it offers a number of benefits. It’s ideal for anyone with wrist or joint problems, plus it’s also a cinch to store and has a good-capacity bowl.

However, keen bakers are likely to find its restricted mixing power disappointing, and it would be good to see programmes that are a little longer to make sure the job always gets done. What’s more, having to rotate a bowl to help a mixer along feels like it defeats the point of having one.