There’s no getting away from it, when you think Morphy Richards, you think kettles. This means that if you’re in the market for a portable DAB radio, it’s probably not the first name you’re likely to think of. The company is clearly serious about the digital radio thing however, and even has a posh web site for its extensive line of radios at www.morphyrichardsaudio.com. These include a DAB boom box, a DAB Micro system and a DAB EPG radio capable of scheduling recordings from an EPG, Sky Plus style, a cutting-edge feature that it managed to bring out ahead of DAB specialists Pure. 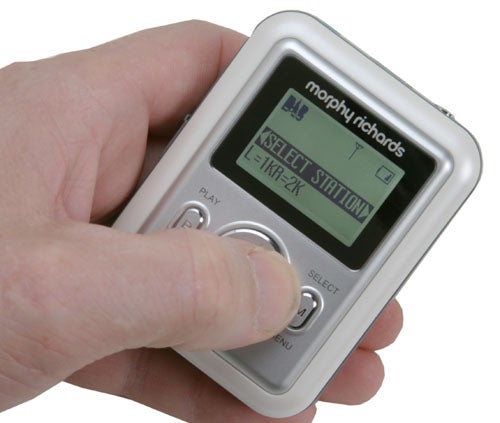 Now Morphy Richards has added this portable DAB unit to its range. In the same vein as the Sony XDR-M1, the MPIO PD100 and the Pure Pocket DAB. In fact, the Morphy Richards deserves the latter’s title considerably more, as it truly is pocketable and as you can see from the picture below is comfortably the smallest Portable DAB radios we’ve yet tested.


However, that said it is the most feature light. It can receive FM as well as DAB, and can play MP3 (but not WMA) with this model offering 256MB of built in storage (a 512MB version is also available) but it won’t record or pause live radio as the MPIO and Pure Pocket DAB can. 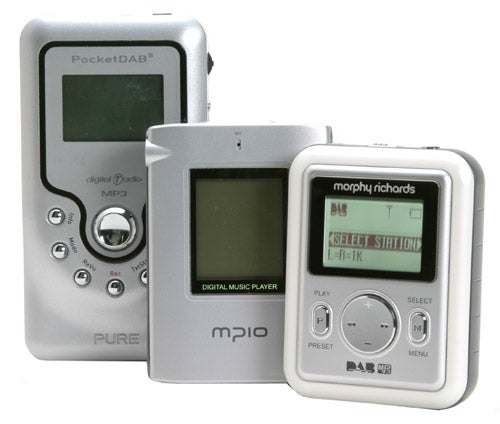 Though it’s slightly shorter than the MPIO player it’s slightly thicker. It looks bulbous and it while its competitors are also made of plastic the Morphy Richards is the only one that really looks it. The silver, grey and white does it no favours.


Instead of being powered by a built in battery, the Morphy Richards uses two standard AA batteries. There is a power port on the left-hand side but a wall charger isn’t supplied. The battery is rated for 16 hours, considerably more than the 9 hours of continuous DAB playback stated by MPIO and the 10 hours of the Sony.

This is because AA batteries last longer but also because of the lower demands on its four line display, compared to eight on the MPIO. One immediate disadvantage of this display is that it can’t prove a long vertical list of all the DAB stations, as you can with the MPIO. Instead you’re limited to scrolling left and right so you don’t know what stations you have access to without moving between all of them. To counter this there are eight preset positions for both DAB and FM 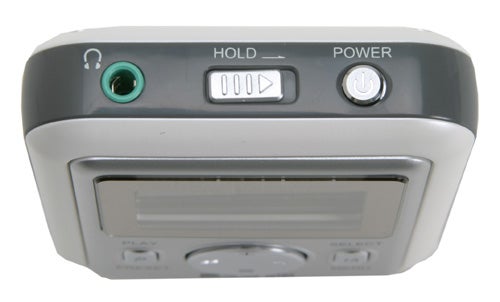 The feature list is so curtailed compared to the competition that there’s not even a button to provide information such as bit-rate of the currently playing station, which was something of a surprise. The layout of information isn’t consistent either. While you’re listening, the second line display the other stations, but when you choose a station, the line switches to showing you the Multiplex it’s attached to. The player also seemed to take a couple of seconds to select a station and all too often displayed ‘Station Not Available’ – before playing it anyway.


Sound quality was perhaps the strong suit of the radio and I was pleased with what I heard, with stations sounding solid and strong depending on the strength of the reception though sound quality obviously improved when using a decent set of headphones, which act as the aerial. There was no EQ settings available while playing DAB but not that it needed it.

Rather than a digital reception indicator the screen just display signal strength bars like a mobile phone. I found that many stations that were barely audible on FM came across loud and clear on DAB, and despite the concerns many individuals have with DAB’s audio quality in the UK, hearing something is preferable to getting almost nothing but static.

The power button sits on top next to the headphone socket with the hold switch in between them. The rocker in the centre moves left and right for navigation and up and down for volume. The button the right is used for selection while holding it down brings up the menu. Here you can adjust the backlight timing and the screen contrast and perform automatic of manual scans for stations. 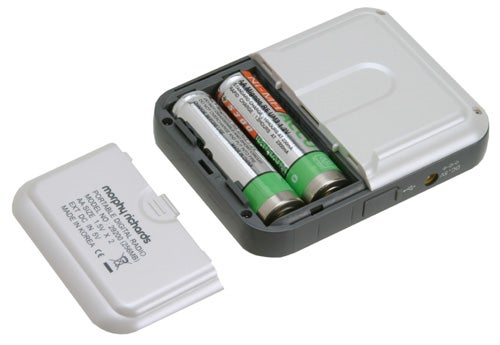 In MP3 mode the screen will display bit-rate, sample rate and the EQ settings. It can read tracks in the root or albums played in folders. There’s no card slot so you have to plug the device into the computer via USB to copy tracks over. (Remove the headphones or the PC will not see the device). Windows 98 drivers (heaven forbid) are provided but for those with us in this millennium in should just be a case of plugging the device in and having it pop up as a drive letter. It should then be a simple case of drag-and-drop. Unfortunately, on our review sample tracks refused to copy over to the player, bringing up a memory error. A replacement unit is winging its way over as you read this and I will update the review with information on how it fares with MP3 as soon as I can. Morphy Richards assures me that this is just a one off glitch in this sample.

(”’Update – 14/11/2005”’ – I had no problems copying MP3s to the replacement player. Pleasingly, it was perfectly happy with VBR files as well as standard bit rate files, even displaying a VBR icon on the screen. Unfortunately, the files were clearly copying over at USB 1.1 speeds, not 2.0, so it will take a while even to fill up the relatively small 256Mb capacity.) 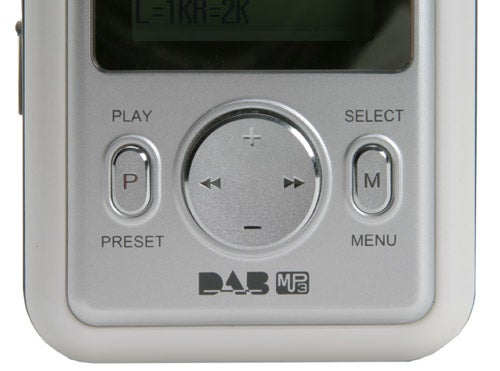 
The Morphy Richards 29200 takes the plaudits for being the smallest DAB radio we’ve yet seen. However, as it lacks the features of the competition while being more expensive, it wouldn’t be our first choice of portable DAB player.