There are a few simple things that you want from a kettle: quick boiling times, decent insulation to keep your water hot, and ease of filling and pouring. Good news, then, as the Morphy Richards 108010 Vetro Kettle delivers these features in spades, all at a reasonable price. To top it all off, the neat light-up body looks fantastic. Only the pour water markings on the side of the jug let the side down – but at this price we can forgive that issue.

The Morphy Richards 108010 Vetro kettle is a dual-wall glass jug appliance that lights up blue when boiling water.

In my tests, it was among the fastest kettles to boil a litre of water and kept it warm the longest. For a mid-priced kettle, these are great results – even if you don’t get any “extra” functions. This kettle has a glass body, ribbed from the outside, with brushed stainless steel, black and shiny metallic accents. But it isn’t too heavy, weighing just under 1.2kg.

The handle has a black plastic underside, making it easy to grip. The only niggle here is that the top of the handle is shiny, meaning it will attract some fingerprints. But luckily, the shininess is limited to the handle area and the very top of the lid, keeping the rest of the kettle smudge-free.

A black plastic button opens the lid about two-thirds of the way, so you’ll have to push it to open it fully. The viewing windows are located on two sides of the kettle and give a good glimpse into the boiling process.

However, the only markings on them are 2 and 4 cups, and MAX 1.5l. There are no other litre markings and cups are represented by a small drawing of a cup rather than an actual line. In my tests, it emerged that one litre of water would reach around the middle of the 4 cups graphic.

It’s understandable more markings would detract from the sleek, minimalist design, and perhaps obstruct the view a little, but there’s quite a lot of unmarked space between the 4 cups and the MAX line. 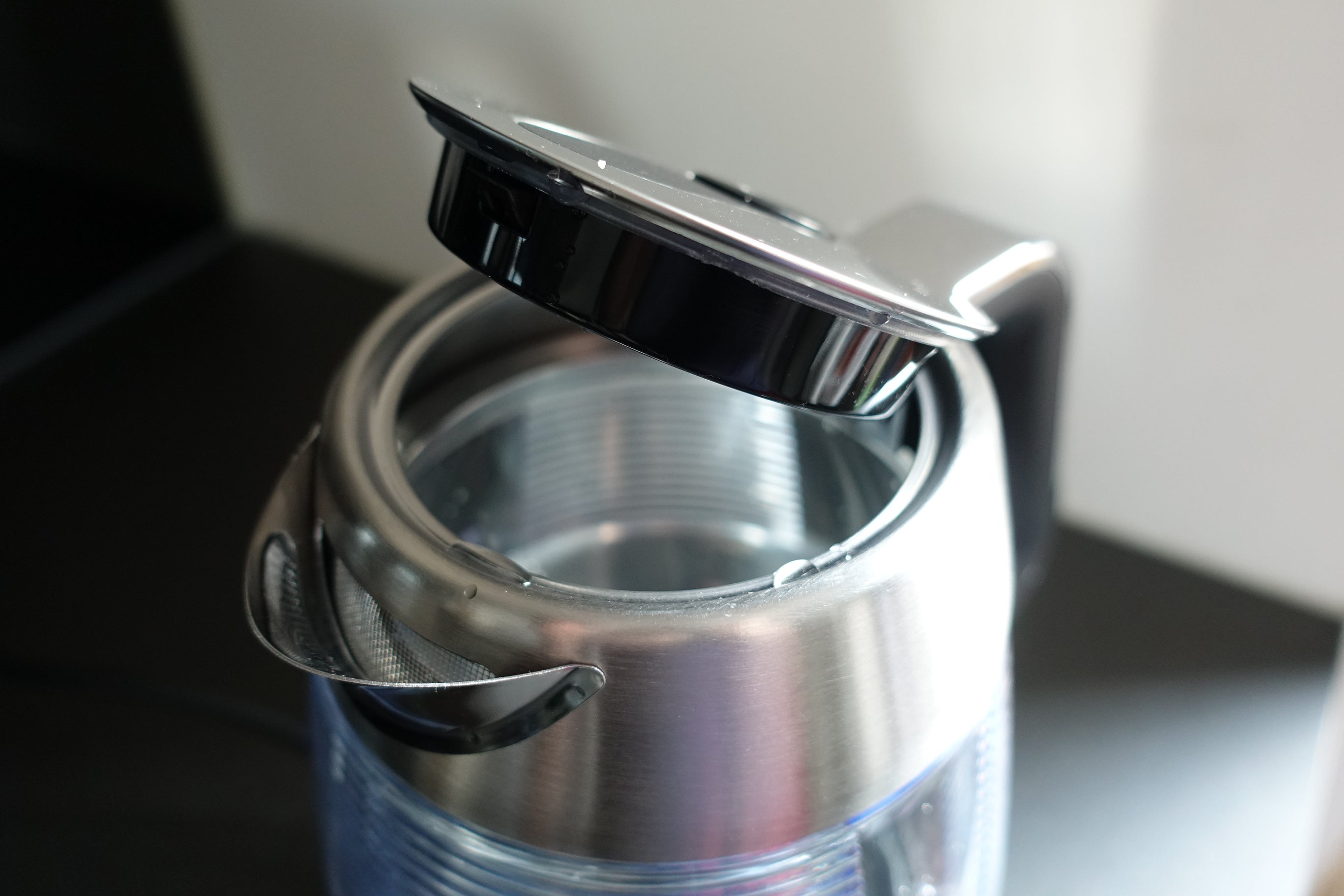 The kettle will light up blue from a ring of lights near the bottom of the jug as you start the boiling process.

It took 2mins 15secs to boil one litre (4 cups) of water – among the faster results I’ve had, with the average being around 2mins 35secs across a range of kettles.

After the boil, I was surprised the Vetro kettle wasn’t as hot to the touch as most other kettles. This was due to the ribbed texture of the jug, meaning there wasn’t just one surface radiating heat. 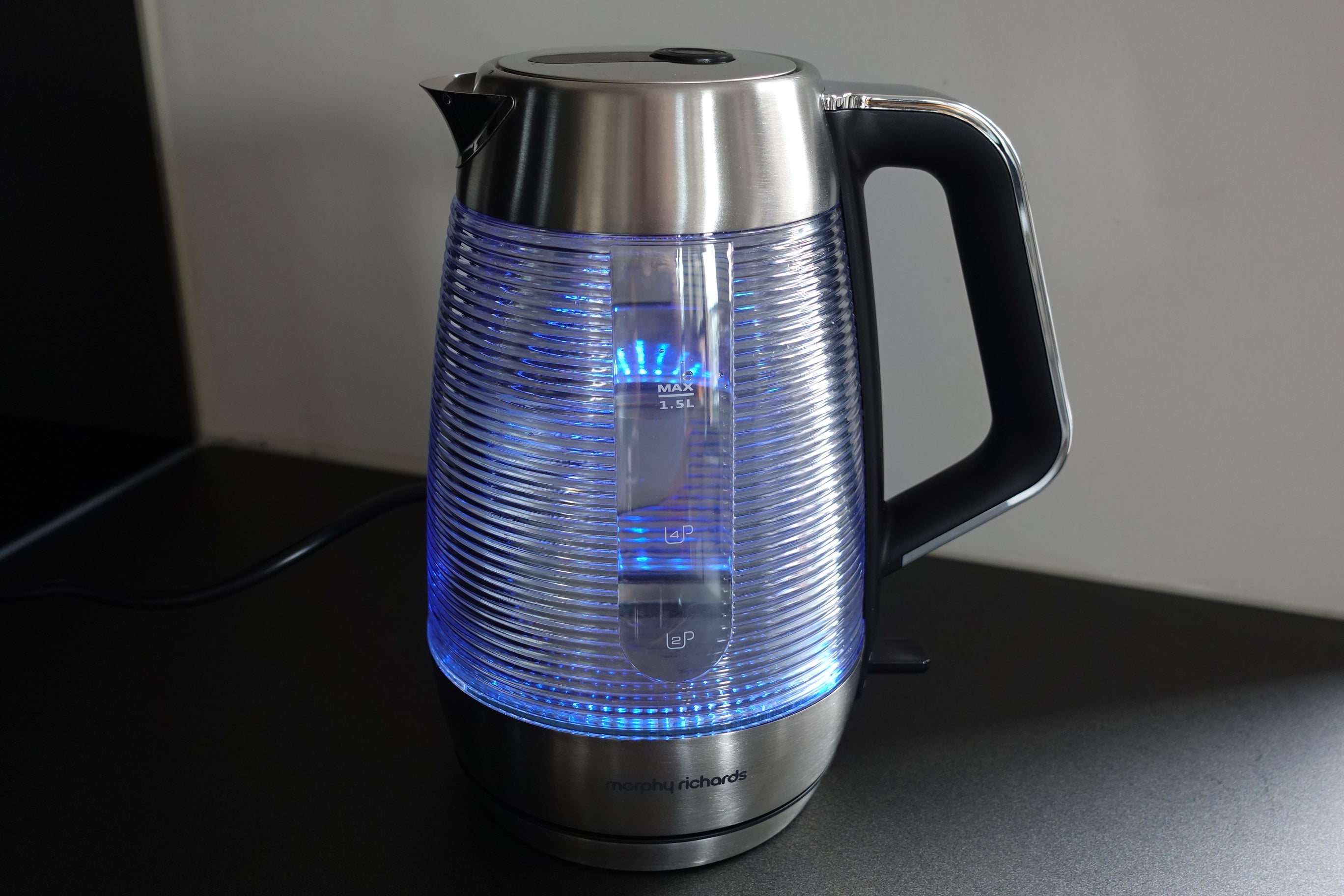 At the same time, this kettle thrived at keeping water warm for longer. After 10 minutes, the temperature was still an impressive 90ºC, going down to 83ºC after 20 minutes. In comparison, most kettles I tested were nearer the 83ºC mark after just 10 minutes.

Half an hour from boiling the temperature was 78ºC; in an hour it was still at 68ºC. This means you can boil the kettle and if you forget about it for a while, then you won’t have to reheat the water.

During the boiling process, the highest noise level the Vetro kettle reached was 77dB. Although one of the loudest results among the kettles I’ve tested, there isn’t much in it, with all results falling between 72dB and 77dB.

The Morphy Richards Vetro boils water in style; it’s mid-priced, fast and keeps water warm for longer – what more could you want?