Available on Xbox One and PS4 (version tested)
Is being “uncompromising” a good or bad thing? Either way, it’s the best word to describe Rogue Factor’s console conversion of its PC adaptation of Games Workshop’s Warhammer tabletop game. It’s the sort of game that informs you that it’s a hardcore strategy game before you even start the main campaign, then goes on to demonstrate that it really isn’t kidding.

Sadly, a lot of what makes it a hardcore strategy game also makes it frustrating, while the slow-moving pace and repetitive combat aren’t likely to win the game a lot of fans. Anyone hoping for a dark fantasy equivalent of X-COM will come away disappointed.

It isn’t that there’s nothing to like about Mordheim. The overall level of polish and presentation is actually pretty good – leagues ahead of what we’ve seen in some other budget Games Workshop licensed efforts, such as Warhammer 40,000: Eternal Crusade. Rogue Factor has captured something of the style and attitude of the Warhammer setting, and if you love in-depth character progression in your strategy games then Mordheim more than has you covered. If only the game as a whole was a bit more fun.

Here’s the premise: Mordheim – a place for the decadant and wealthy – has been smacked by a comet that has devastated most of the city. This comet has also deposited chunks of wyrdstone around the city, creating a mini-gold rush around the potent chaos mineral. You’re the leader of a warband; a growing gaggle of heroes, archers/pistoliers and bruisers, looking to extract as much wyrdstone as possible from the decimated streets.

Unfortunately, you’re not alone, and several other factions are trying the exact same thing. You can pick between human mercenaries, law-loving priestesses, rat-like Skaven and Chaos bands, plus Witch Hunters if you pay for the extra DLC. Each has its own strengths and weaknesses, sponsors to keep happy and faction-specific story missions to complete. 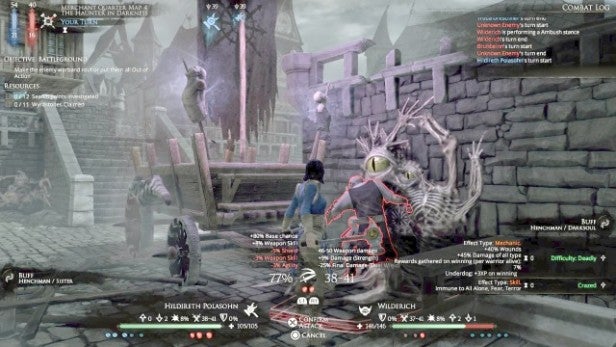 Each procedurally generated mission sees you deployed in an area of the city, with a matching force of enemies at large. To complete the mission, you need to either kill or rout the other team. Most missions also have side-objectives, pushing you to, say, grab as much wyrdstone as possible, or slay an enemy leader or hero and pinch some significant artefact. These objectives need to be completed before the other team is killed or routed, as your guys won’t hang around to grab more wyrdstone or loot any corpses. The mission ends right there.

The action is turn-based, but Mordheim doesn’t play like your typical turn-based strategy game. Instead, you play from a third-person viewpoint, moving each character in turn with the left analogue stick until they reach their maximum movement range.

While doing this you take a limited number of actions, which may be jumping down from or climbing up to a higher level, shooting and reloading your bow, casting a spell or taking a swing with your mighty sword or great-axe.

You also have two overwatch-style stances, one for archers and one an ambush for melee-focused characters, plus some others (dodge and parry) that give you a better chance of warding off incoming attacks. Once you’ve exhausted all your options, you end the turn and the game switches to the next character.

It’s a solid system that works well on a console controller, and Mordheim has the grace not to punish you if you go in the wrong direction – you can retrace and so undo your steps, although not your actions.

However, you do have to be a bit wary. You can only climb up a wall or down from a terrace at specific glowing points, while the action takes place in ravaged interiors as well as the streets; a challenge when you can find yourself on an upper level, or down a corridor with no way out except the way you came.

You can also block an alley or stairway with one of your team, preventing anyone else from getting past – even though it looks like there should be plenty of room for three or more guys. 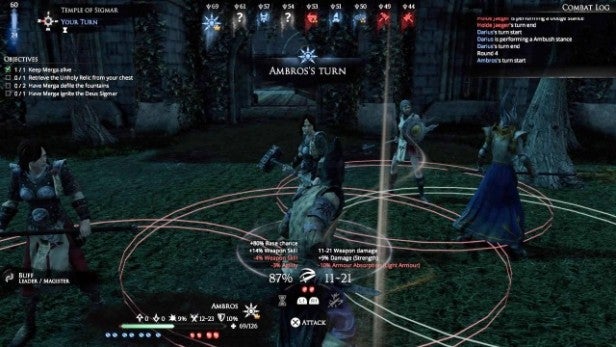 Combat isn’t particularly sophisticated, nor actually all that satisfying. It’s all based around virtual dice rolls, with bonuses for skill attributes and minuses for your opponent’s perks and stances. But unless you get a critical strike your blows seem feeble, making each fight a question of health-gauge attrition.

Archers, in particular, seem spectacularly prone to missing, even from close range, and when they hit they do precious little damage. In fact, your struck enemies will happily wander around oblivious to the projectile still visibly lodged in their head or torso. However, critical hits can be devastating, while a loss of morale can result in rout rolls, putting you out of the mission within seconds.

At times, this random element can be infuriating. At one point, I’d smacked down the enemy team from six to two warriors, with both of them on low health. With four of my guys remaining, victory seemed assured. However, one of them got a lucky hack in on my leader and brought him down. I subsequently failed my rout roll, ending the mission with almost an hour of careful collecting and targeted violence down the pan. This in turn nearly blew my whole campaign. I wasn’t a happy camper.

The enemy AI, meanwhile, seems primitive. Victory in battle is pretty much a numbers game, meaning that if you get everyone together and hang around in a bunch then you’ll have the advantage, particularly when the game seems intent at throwing foes at you one-by-one.

Archers are easy meat for a rush of well-armed melee warriors, while some enemies seem to get stuck in ambush mode. This leaves you faced with an endless stand-off, or the option of getting enough men behind them to go in for an easy kill while they’re busy staring at the position you vacated several turns ago. 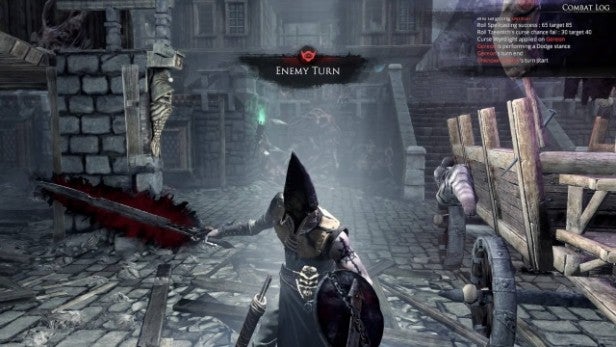 Of course, there are some good reasons not to gang together. In fact, separating your warband and sending them off in different directions is by far the most effective way to meet your secondary objectives before the victory conditions are met.

Unfortunately, each warrior can carry only a few chunks of wyrdstone, while separating them leaves them vulnerable to a proper duffing. As a result, it’s tempting to ignore all those wyrdstones and focus on killing off the other team – although this will cause you problems later as the campaign unfolds.

And did we mention that all of this is painfully slow? You face a tedious wait – sometimes with nothing going on on-screen – every time an enemy moves, which makes each round seem needlessly protracted. There are none of X-COM’s dramatic flourishes when an enemy appears or enters overwatch range, either. Worse, Mordheim features some of the longest loading times I’ve come across in a PS4 game, presumably while it builds its procedurally generated levels.

Bar some more interesting special missions, it’s all a bit repetitive, and while the streets and the warriors are well-rendered, the limited colour palette and lack of variety of enemy designs doesn’t exactly inspire excitement at the start of a new mission. There’s no real sense of progression or any difficulty curve, and most of the time you just get more of the same. 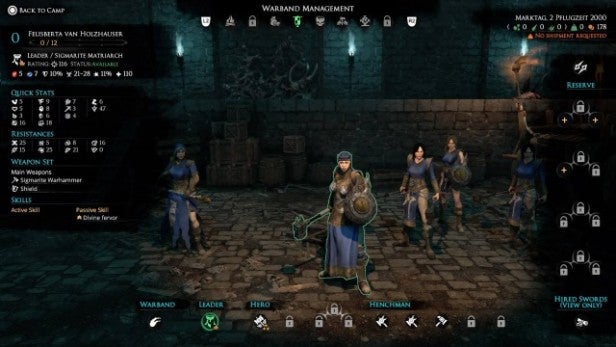 For some, Mordheim’s saving grace will be what happens outside of missions. You can get oddly attached to your characters, ponying up cash to nurse them through their wounds, and cheerfully tweaking their skills and attributes as the experience comes through.

The lack of any saving and reloading – see what we mean about hardcore – means it’s a blow when a character goes down, or reaches a point when their injuries are too heavy to make them worth healing. Luckily, most will be back on their feet within a day or two, and will happily go out and fight with one limb missing.

There’s also a real sense of pressure on you to deliver up the wyrdstone, with your warband’s sponsor throwing in punitive penalties if you can’t provide for their requirements every 10 days or so; this will eventually bring your game to an end.

With injuries that can be a tall order, meaning you have to put some effort into gathering if you don’t want to get dumped from the campaign several hours in. In a way, this is frustrating – Mordheim already feels tough enough – but it does add something to the tension.

If all this seems like hard work – and you wouldn’t be wrong – then you can always give the campaign a break and opt for Skirmish mode, playing simple battles against the CPU or other players online. As you can tackle skirmishes with or without lasting consequences for your warband, it’s a good way to build your skills without the frustrations of the campaign creeping in.

Verdict
Mordheim is unapologetically hardcore, and if you’re not the type to play the X-COM games in Iron Man mode then you might want to give it a miss.

It’s complex, detailed, finicky and somewhat unforgiving, and while the strategy can be tense and interesting, the actual combat feels slow and a prone to random elements.

Warhammer fans might love the authentic atmosphere and visual style, but you need a level of patience and persistence to get the most from a game that isn’t really prepared to meet you halfway.