As far as combining performance with convenience and versatility goes, the Moon 390 makes as strong a case for itself as any high-end hi-fi around.

I know “hi-fi” brings to mind any amount of hobbyist nonsense. Massive stacks of electronics. Even more massive loudspeakers. And expenditure beyond massive, of course. But that’s not how Moon rolls. Apart from the significant expense, that is.

Although the 390 might look like any other anonymous box of high-end hi-fi, in fact it’s ready to form the nerve-centre of a cutting-edge home entertainment setup. No matter if your priority is music, games or movies, the Moon 390 can deal with every source in your setup – whether it’s analogue or digital, audio or video, wired or wireless – and bring it to its optimal state before it gets to your speakers.

On the face of it, the thick end of £5k for some input switching, music streaming and a volume control feels like quite a lot of money. And it is. But if you’re determined to get the best from your games, movies and music, and you have the speakers to do it justice, the Moon 390 Network Player is a piece of high-end hi-fi that will satisfy for years.

There are one of two camps you can occupy when considering the Moon 390’s looks.

You can be thankful the company has resisted the temptation to pile on the gold trim, the fancy typefaces and the pointless architectural flourishes of some competitors in an effort to make the 390 look worth the money. Or you can be of the opinion that £5k really ought to buy a bit more visual pizzazz, and that no matter how sturdy, no matter how beautifully constructed and finished the 390 is, it really should make more of an effort in the “pride of ownership” stakes.

Personally, I like the 390’s understated design. It looks confident; the whole box feels built to withstand seismic activity, and the volume control turns with the damped solidity of a bank vault handle.

The impression of uncompromised high-end hi-fi luxury is undermined somewhat by the display screen, however, and – to a lesser extent – by the user interface.

The OLED screen itself is crisp enough, but it’s too small, too cluttered and too monochrome. The problem for Moon here is that everyone with £200 to spend on an Amazon Echo Show knows what a display screen should look like, and this isn’t it.

Moon will (quite rightly) argue it has spent its resources elsewhere in the 390 – and, it doesn’t have the limitless funds of Amazon. Both of which are true, but it doesn’t alter the fact owners will feel a little short-changed.

The remote control handset and MiND control app (the latter free on Android and iOS) aren’t as compromised, but they’re both quite rudimentary nevertheless.

The remote feels nice in the hand but is in desperate need of some backlighting. The app is cleanly designed and works well, but isn’t as logical or wide-ranging as it might be. Again, both these issues come down to questions of resources and priorities – but there are a sufficient number of hi-fi companies the size of Moon out there who demonstrate that it can be done.

Did I mention Moon’s priorities? Good – because it’s obvious the feature count is one area the company isn’t prepared to compromise. This is a long list, because the 390 is equipped to handle just about any source of audio or video information you’re able to throw at it.

Starting with old-school analogue sources of music, the 390 is fitted with an extremely capable phono stage for amplifying turntables. It’s switchable between moving magnet and moving coil configurations, and features adjustment for impedance, gain and equalisation too. Like all true high-end hi-fi components, the 390’s vinyl game is on point. 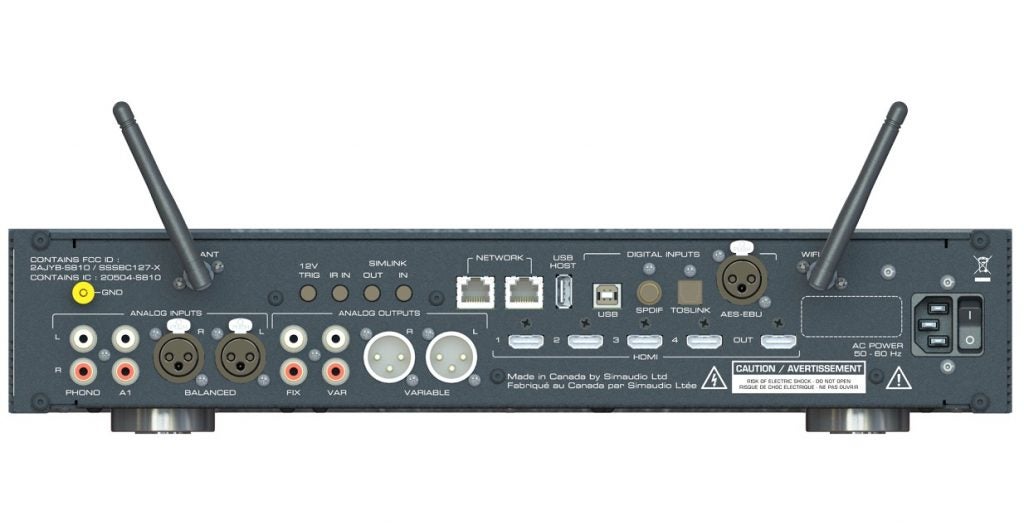 Balanced XLR and unbalanced RCA stereo inputs are included too, so the Moon is as flexible with analogue inputs as it’s possible to be. There are the same sockets for analogue output, with variable and fixed output via RCA, so it doesn’t matter if your music is being amplified by a dedicated power amp or some active loudspeakers. An effective and high-quality connection is available.

For digital sources, the 390 has USB, optical, coaxial and AES/EBU inputs leading to its DAC. For networked or streamed sources, Moon has embedded Qobuz, Tidal and Deezer streaming services alongside TuneIn internet radio. It can handle PCM, DSD and MQA digital audio standards, can deal with Bluetooth and is Roon-ready too.

If hard-wired via its Ethernet socket, the 390 can deal with PCM up to 384kHz and DSD up to 256. These are the numbers high-end hi-fi demands, and represent the current cutting-edge of high-resolution audio. Those not deep in the high-end hi-fi terminology need only read the section headed “Sound quality” to discover what these numbers mean in practice.

As a final flourish, and as a demonstration of just how adaptable Moon has made the 390, there are four HDMI inputs and an HDMI output. So Blu-ray players, Sky boxes, games consoles and what-have-you can all benefit from the 390’s prowess.

In addition, despite the fact the 390 is strictly a stereo product and can’t deal with multi-channel audio information, the difference in audio handled by the 390 to that passed straight to your TV is pretty hair-raising. The HDMI output is compatible with audio return channel (ARC) TVs, too, so your TV can also send audio to the 390. 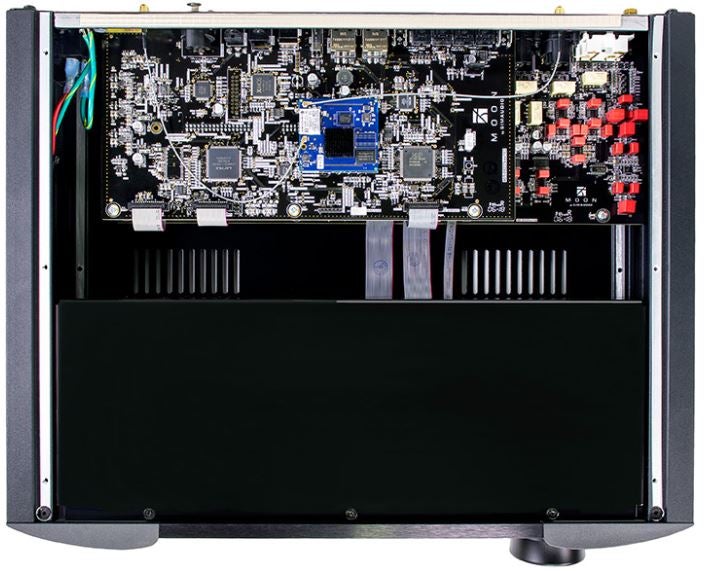 In almost every circumstance, the 390 sounds entirely convincing. And, unlike a lot of high-end hi-fi, it doesn’t turn its nose up at less capable sources of music. So no matter if, like me, you listen to a 320kbps Spotify file of television’s Marquee Moon via Bluetooth, a CD of Szun Waves’ New Hymn To Freedom, a vinyl LP of Aretha Franklin’s I Never Loved A Man The Way I Love You, a lossless Deezer file of Ty Segall’s Every 1’s A Winner or an MQA-based Tidal Masters stream of Clint Eastwood by Gorillaz in quick succession, the effect is, broadly speaking, the same.

The 390 extracts a remarkable amount of detail, both fine and broad, from a recording and lays it bare for your appreciation. It does this without sounding in the least bit mechanical – music from the 390 is fluid and fluent, with the kind of effortless authority that speaks of hundreds of hours of toil in the development lab.

It gives a singer such as Aretha full expression, allowing all the potency and emotion of her delivery full rein. At the bottom end it crosses the line between “neutral” and “rich” just a little, but when the bass frequencies are as fulsome and well-controlled as they are here, I doubt it’s a decision any listener will take issue with.

This slightly warm tonal balance isn’t at the expense of dynamism or drive, either. The 390 manages to put significant distance between Szun Waves’ quieter, more contemplative passages and the moments of all-out attack, and it propels even difficult tempos forward with absolute command.

The 390 is capable of hitting hard when need be, and gossamer-like delicacy in other circumstances. It organises dense recordings well, giving pleasing insight without becoming analytical.

Fundamentally, the Moon 390 is an effortlessly musical listen. You know a product is properly sorted and properly capable when it can make as much of a difference to the PS4 soundtrack to FIFA 19 as it does a Blu-ray Audio disc of Oscar Peterson’s Night Train.

You should buy the Moon 390 Network Player if…

An investment such as this only makes sense if the equipment you’re partnering it with is of equal ability – which, inevitably, means of similar expense. As a streamer and a pre-amp, the Moon 390 is so very accomplished it can make a silk purse out of even the most outrageous sow’s ear of a source; however, it needs its partnering power amp and speakers, or active speakers, to be able to carry on the good work.

So why would you drop all this money on the Moon 390? Well, because you want uncompromised performance from every source of home entertainment (music, movies, games) you own, and you want to achieve that with as little fiddling about as necessary.

The 390 can handle all your audio sources, can strip sound from as many as four video sources before sending on the pictures to your TV, and can even bring your TV’s sound into its orbit. It can do all this to a standard that’s hard to criticise, even at this sort of money.

You shouldn’t buy the Moon 390 Network Player if…

Though to be fair to the Moon 390, quality this good doesn’t come cheap. A standalone streamer of similar ability will cost you well into four figures, and then you need to budget for an equally capable phono stage, DAC and so on… and then you’re dealing with multiple boxes that need multiple power supplies and multiple shelves.