What are the Monster iSport SuperSlim?

Like the Victory, the SuperSlim aren’t cheap. Costing £129.95, they’ll be out of the reach of most. But, they’re cheaper than the Jabra Sport Pulse (£199), our current sporty wireless favourites.

While the iSport SuperSlim’s sound profile won’t be to everyone’s taste, there’s still plenty to like about them, if you’re willing to spend big on a pair of sports headphones.

SEE ALSO: Hands on with the Parrot Zik Sport 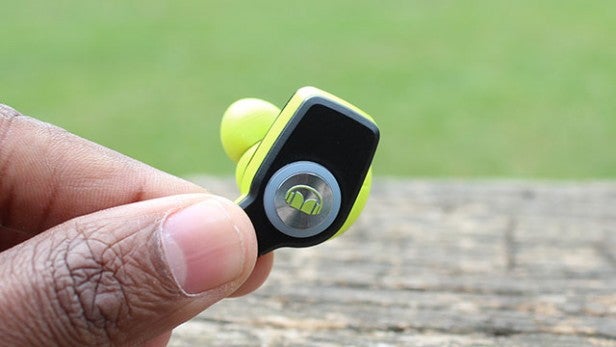 The SuperSlims are essentially the iSport Victory in-ears – and that’s a good thing since Monster got plenty right with its top-end sports headphones. While the cable has gone, you still get the tangle-free cord that connects the two earbuds together and sits behind the neck. Inevitably, the neon-green version won’t be to everyone’s taste; more low-key black and blue versions are available too. We were more than happy with the eye-catching hue, especially when trying to locate the in-ears from the bottom of a bag.

The first big change is with the iOS-friendly ControlTalk mic. It can still be used for skipping tracks and adjusting volume, but the design is more robust. The buds themselves are larger, however, to accommodate the built-in battery and the USB charging port. Monster says these are its slimmest in-ears, but line them up against the Jabra Pulse and that slight slenderness isn’t something to make a song and dance about.

Thankfully, Monster sticks with its earhook design and soft silicone replaceable earbuds. Small, medium and large buds are supplied in the box, along with spare earhooks. Switching them in and out is simple. The iSport SuperSlim are one of the most secure sporty in-ears we’ve tried. Even when things get sweaty, they don’t budge, and the build-up of moisture doesn’t make them uncomfortable to wear. 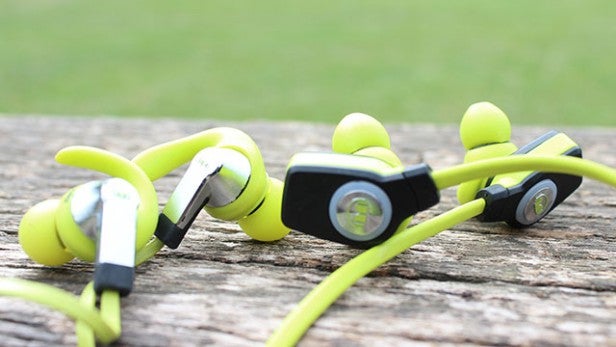 To improve fit further, they come with a small piece of black plastic, which holds the end of the cord to reduce it flapping behind your neck. Even without it the cord wasn’t irritating, although using it will ensure it doesn’t become trapped in clothes or your hair.

A significant feature of the iSport SuperSlim are that they’re wireless. You get six hours of wireless playback with a 50ft range before losing connection. This should be enough to move from one gym machines to another when it becomes free. It’s a Bluetooth connection, which is activated by pressing the central button on the remote. The logo will light up blue if there’s enough battery, or flash red if it needs a charge. Thankfully, if you’re away from a connection then it will shut itself down, helping to preserve that precious battery life.

Like the iSport Victory, the SuperSlim are washable, so you can run them under a tap to clean off any sweat off. We’d suggest making sure the USB latch is closed – although having forgotten to do this on one occasion, we’re please to say that we didn’t encounter any problems of it malfunctioning or not being able to charge. 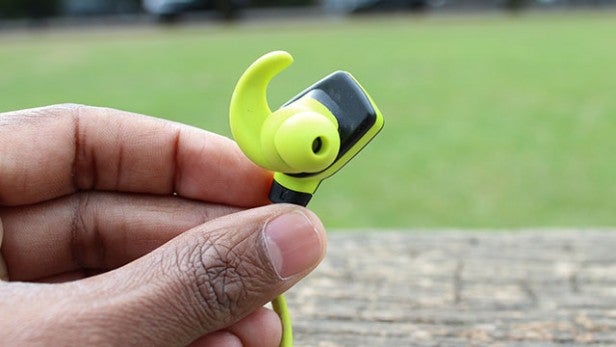 The bar continues to be raised for sound quality when it comes to sports headphones. As we’ve already mentioned, Monster’s typically bassy sound isn’t going to be for everyone, but the company delivers some of the best-sounding sports headphones out there.

If you’re more heavy house than audiobook enthusiast, then you’ll love them. It’s all about the bass, but it isn’t delivered in the erratic way of other wireless sports headphones – such as the Beats PowerBeats.

In our opinion, the detail and finesse of the Monster iSport Victory are missing. However, there’s enough treble and mid-range to prevent it sounding muddy – which won’t alienate those who prefer a little more finesse. On the whole, sound was punchy and it didn’t become unstable when we cranked things up either. Although the Jabra Sport Pulse offer more balanced sound quality over the iSport SuperSlim, you’ll have to pay more for the pleasure.

If you value working out in peace, the noise-isolation feature is fantastic. While it isn’t necessarily safe if you’re cycling or around busy roads, if you’re the kind of person who likes to block out the world, then the iSport SuperSlim won’t disappoint. 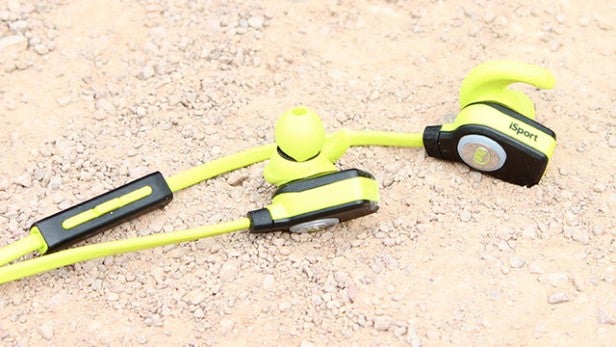 Should I buy the Monster iSport SuperSlim?

We were big fans of the iSport Victory, and with the addition of Bluetooth connectivity, the iSport SuperSlim will be even more of a runner or gym lover’s best friend. We love the washable, secure design and can live without the finesse in the sound quality for what is, overall, a great sounding pair of sports headphones.

Although £129 is a lot to pay for dedicated sports in-ears, when you compare these earbuds to similar setups, the SuperSlim do actually offer better value. While Jabra’s wireless in-ears offer better sound and optical heart-rate tracking, they’re £60 more expensive. The JayBird BlueBuds X are an affordable alternative offering great sound and a durable design, although we had issues with the fit.

If they’re within your price range, and you love listening to big, bassy tracks, then the iSport SuperSlim in-ears are a good fit.

SEE ALSO: Hands on with the Lumafit

The Monster iSport SuperSlim’s enjoyable sound and secure fit make them a worthy addition to your gym bag.