You’ll not only be entertained by Monster Hunter World: Iceborne for hours, but you will be in awe of its complex systems, and how they align so well to create an unforgettable expansion to an already fantastic game.

Editor’s note: We’ve updated this review to reflect the PC, as well as console experience. Additional words by Alastair Stevenson.

Iceborne is the first, and last, major DLC to Capcom’s stellar Monster Hunter World. For those that missed it, the expansion originally launched on consoles late last year, though it’s only just made its way to PC this January.

While I’d personally like Capcom to find a way to launch its games on PC and console at the same time, having spent many moons exploring Iceborne’s, bold, and cold, new world I can confirm this version is worth the wait. Here’s why.

Iceborne may sound like a small outing that adds a handful of new monsters, weapons and features. And yes, at its heart the mechanics are the same as the original Monster Hunter World. But it’s far, far more than a simple update. Cliff Notes: You are an elite hunter in a strange land tasked to explore and kill the local gigantic wildlife using a variety of different over-the-top weapons and traps. As usual, quests can be taken on solo or with a group of fellow mercenaries.

After jumping into Iceborne, you’ll quickly find it’s actually more of a fully-fledged sequel to the original Monster Hunter World. It adds a new story and expansive new area to explore alongside a wealth of new mechanics that will please veteran hunters looking for a new challenge.

The biggest of these is the addition of the series classic “G-Rank” missions. They’re called Master Missions, but they fulfill the same purpose. In the Monster Hunter series, the difficulty of quests is often separated into three ranks; Low Rank, High Rank and G-Rank respectively. In typical fashion, World launched with Low and High rank, with the elusive G-Rank nowhere to be found. That is, until now.

This is par for the course for the Monster Hunter games, releasing an additional G-Rank alongside an “Ultimate” version of the game. The same is reflected in Iceborne, where G-Rank has been renamed Master Rank, and brings along with it a new locale, in addition to a slew of new challenges. 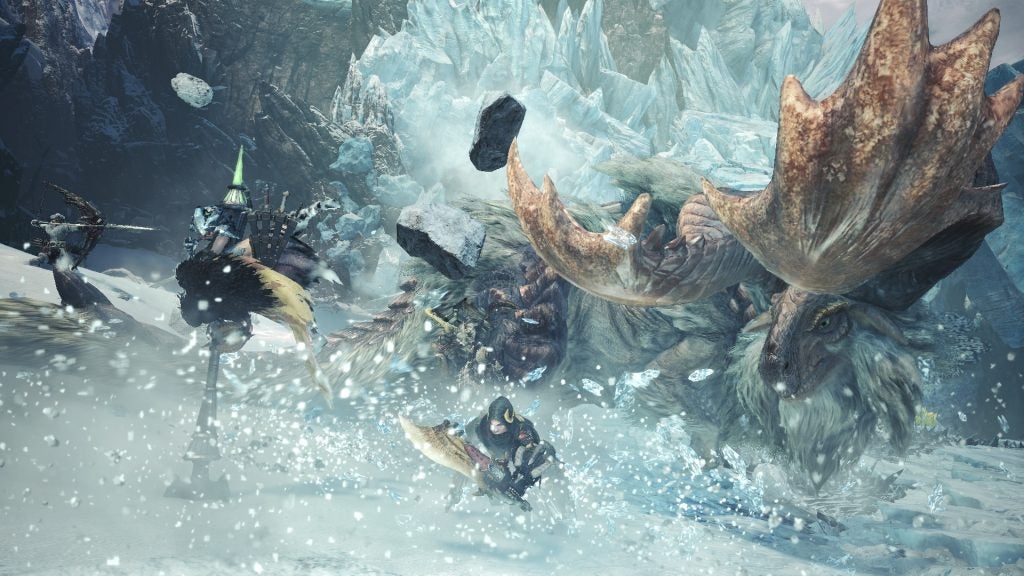 And that’s why mums go to Iceborne…

You can access Master Rank in Iceborne simply by completing the main quest in Monster Hunter: World, making it more accessible than once thought. Once this happens, you’re brought over to its new, frosty areas and hubworld, which looks beautiful.

While graphically it still looks amazing on console. Iceborne takes things to another level on PC thanks to a few key features. The biggest are the additions of an uncapped 4K resolution setting, high resolution texture pack and ultrawide screen support. These options make the already gorgeous expansion look absolutely mind-blowing with the right setup.

The new region’s freezing white caps and rolling hills are stunning and give the game a new lease of life. My only downside is the PC version still doesn’t feature innovative new graphical technology, like ray tracing, which would have been amazing across Iceborne’s snowy landscape. This isn’t too surprising though as it’s still pretty demanding. Like the main game, even with a 9th Gen i7, GTX 1080Ti GPU and 32GB of DDR4 RAM, it floated at around 30fps on the highest graphical settings.

The visuals aren’t the only change Capcom’s made to the game’s setting, either.

For starters the hub has had a complete redesign. There’s no running about for a few minutes just to visit the smithy, it’s more constrained, quick and easy to navigate as a result.  The same applies to the Gathering Hall of Seliana, where you’re able to manage resource centres, bounties and gear all in one beautiful hub, surrounded by hot springs and its frosty, mountainous landscape.

Your personal room has also received some well-needed changes in Iceborne. Now, you’re able to accrue hundreds of customisation options as you complete optional sidequests, which is a welcome distraction from the gauntlet of difficulty that is facing the Master Rank monsters in the main quest, or while farming for items on casual expeditions.

The main gear loop remains the same in Iceborne. You hunt a Master Rank monster, and obtain weapons and armour far more powerful than you had before. If you’ve played Monster Hunter: World for hundreds of hours, you’ll be throwing out your beautifully crafted armour sets quickly to replace them with Master Rank sets. The same applies for your weapon. These all have brand-new customisation slots, which makes acquiring skills you want in combat that bit easier. 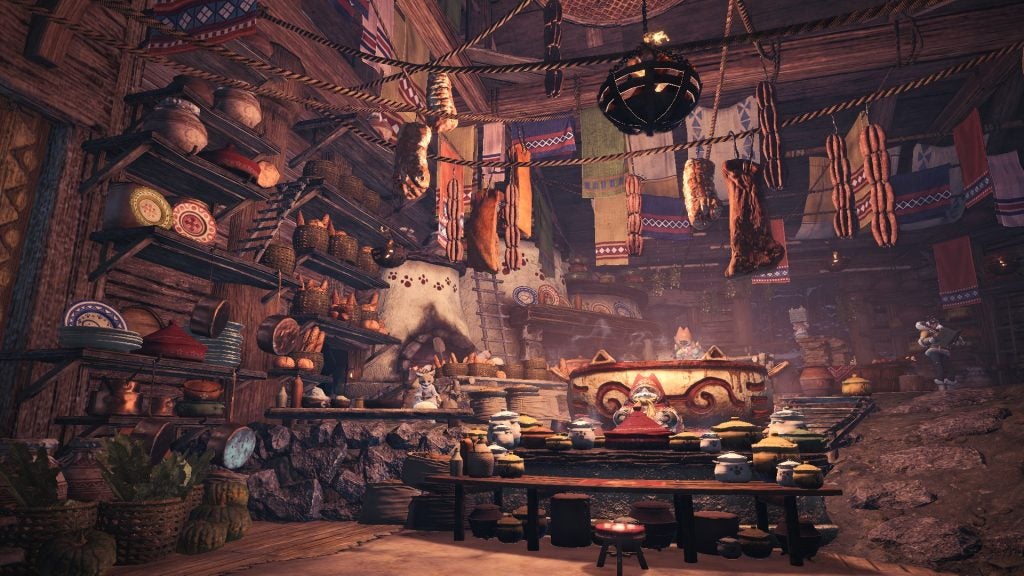 Almost every weapon from the core selection of 12 have received some new moves, buffs or similar elements of polish. These take into consideration the aggressiveness and mobility you’ll need while facing these Master Rank monsters. However, its biggest change is the addition of the Clutch Claw. As you might remember from Monster Hunter: World, you had access to a slinger that could be used to fire things at monsters, or grapple up surfaces. These two functionalities have been mixed together, meaning that you’re able to use your slinger while your weapon is out, and also use a weapon specific ability to get it to drop slinger ammo, make it flinch or create weak points.

Once you’ve reached Seliana and Master Rank, you’ll immediately be facing the roster’s new additions alongside new variants of Monster Hunter: World’s original beasts. Each returning monster possesses new moves and behaviours to keep the fights fresh, and new monsters such as Banbaro are a delight to fight in the new Hoarfrost Reach locale. These environments aren’t simply for show, they showcase how deep the ecosystem really is, and takes the utmost care in demonstrating how it works. Everything from miniscule insects to gargantuan Elder Dragons are depicted with magnificent detail.

Something to note in Iceborne is the significant difficulty jump past the 4 and 5 star Master Rank quests. However, this difficulty is justified by forcing you to engage with mechanics that have previously been easy to ignore in High Rank. When crafting armour sets, you’ll need to pay more attention to its skills and resistances, and ideally you will need to be crafting or kitting out bespoke sets in order to conquer more difficult monsters. The co-op experience significantly helps here, and also highlights the changes to each weapon and addition of the Clutch Claw, which makes the game far more bearable when fighting against the colossal monsters that inhabit Iceborne’s Master Rank. 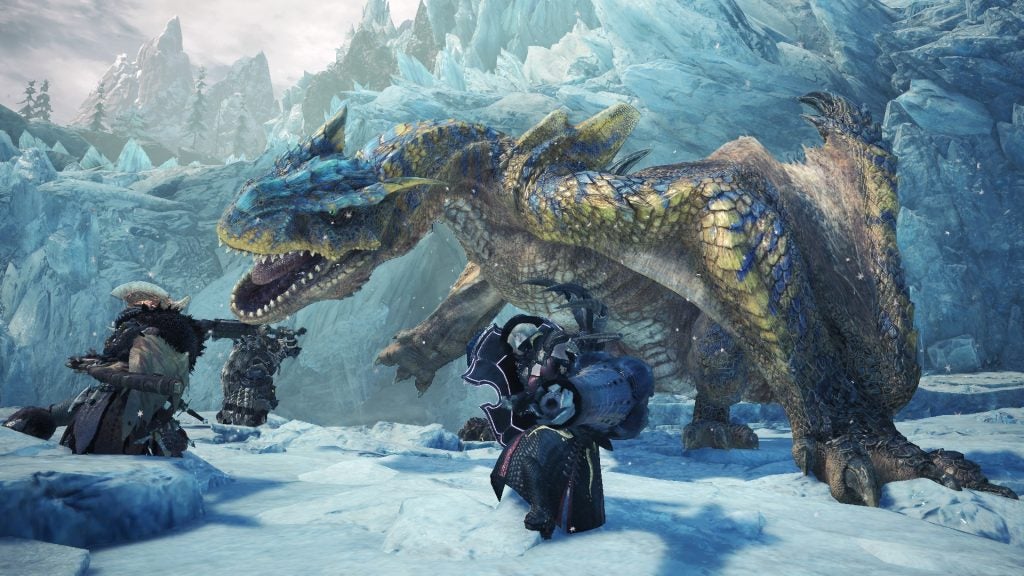 The star of the show is how enticing kitting out your armour sets is. As you gather materials from monsters, you’ll need to earn its teeth by knocking them out, or a wayward tail by severing it. Each piece of armor that you wear isn’t just gear, it’s a magnificent trophy. A stark difference to many other  “live” games, or live-service experiences like Destiny or The Division, where the loot treadmill is often repetitive and boring. While Monster Hunter feels significantly more rewarding for a number of reasons.

By factoring skill into the equation when grinding for loot, it’s a perfect coalescence between player empowerment, skill and challenge. When you finally obtain that new piece of armour or powerful weapon, they feel earned, not grinded for. While there is still RNG chances involved with Monster Hunter’s loot, it feels a lot more fair than decoding a purple orb with vendors in a hubworld.

This tangible nature of the loot makes you feel more connected to Monster Hunter’s living, breathing ecosystem. You’re not just an observer or a random ubermensch, you feel like you’re a part of the world. With Master Rank and its associated difficulty you feel this even more, and this is addressed in the game’s main story. 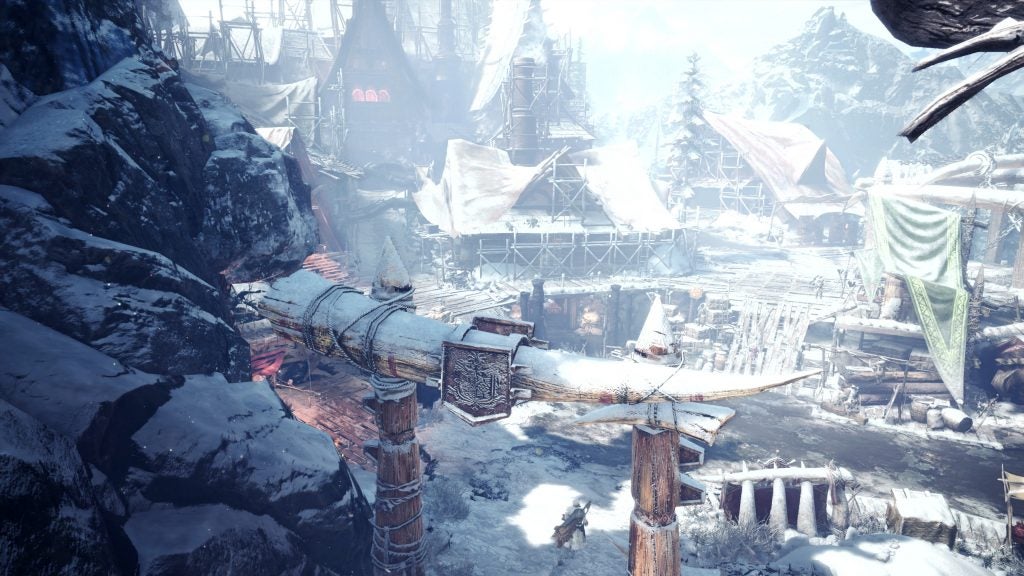 If you take the player out of the equation in Monster Hunter World: Iceborne, it would still serve a purpose. This wild new frontier isn’t meant for you, it’s to showcase and respect nature and monsters around you, and for that alone, Iceborne is special.

It teaches you to have a thorough understanding of whatever you might be hunting, to understand them deeply, to a degree where you’re able to know where they rest, where they sleep and where they eat. That loot that you earn after a hunt never feels unearned, or cheap. This game, the monsters, ecology and combat are as near to perfection as an action game can get, and that’s not only reflected in its story and world, but also its core mechanics.

All this may sound small but the changes add up to make Iceborne feel like a wonderfully unique, new adventure. The only ongoing negative is the PC version’s obtuse keyboard and mouse controls. This is the one area Capcom hasn’t managed to nail porting Monster Hunter to PC. It’s made some improvements to the mechanics, adding improved support for keyboard shortcuts and removing some of the more obtuse multi-input commands. But the system still feels clunky, and within an hour I was back to my trusty Xbox controller.

You’ll not only be entertained by Monster Hunter World: Iceborne for hours, but you will be in awe of its complex systems, and how they align so well to create an unforgettable expansion to an already fantastic game.