I’ve always found Capcom’s Monster Hunter series a little hard to get into. A keen understanding of its mechanics and a prepared, dedicated team of friends are almost essential to experience its greater moments. Once you get that far, it’s unlike anything else, but if you can’t, Monster Hunter Stories is the next best thing. Capcom has crafted a cute little JRPG that not only remains faithful to its origins, but makes them far more approachable to newcomers.

Monster Hunter Stories marks a completely different approach for the series, favouring traditional turn-based combat over the real time, action-oriented affair of its siblings. You play as a Rider, a young person capable of hatching and training monsters as their own. Once hatched you can take these beasties into battle, fighting alongside them as your bond slowly strengthens. It’s a lot like Pokemon with a few extra bells and whistles, taking obvious cues from other games in the Monster Hunter universe.

Starting off in the peaceful lands of Hakum Village, my character and a couple of friends come across a mysterious egg. After performing a ritual around it, a small dragon emerges. He’s adorable, and quickly befriends me as we head back to the village. Unfortunately, because it’s a JRPG, something tragic happens. An ominous evil presence known as The Blight attacks, killing your friend’s family and sending the village into meltdown.

This tumultuous series of events leads you to becoming a Rider and heading into the wider world to eventually face off against an ancient evil. It’s your usual affair and doesn’t make any true attempt to deviate from the genre’s expectations, but works well given its cutesy atmosphere. The world you explore is a sight to behold, filled with gorgeous environments and bizarre creatures just begging to be discovered. I found myself digging into every nook and cranny gathering resources once the chance arose. 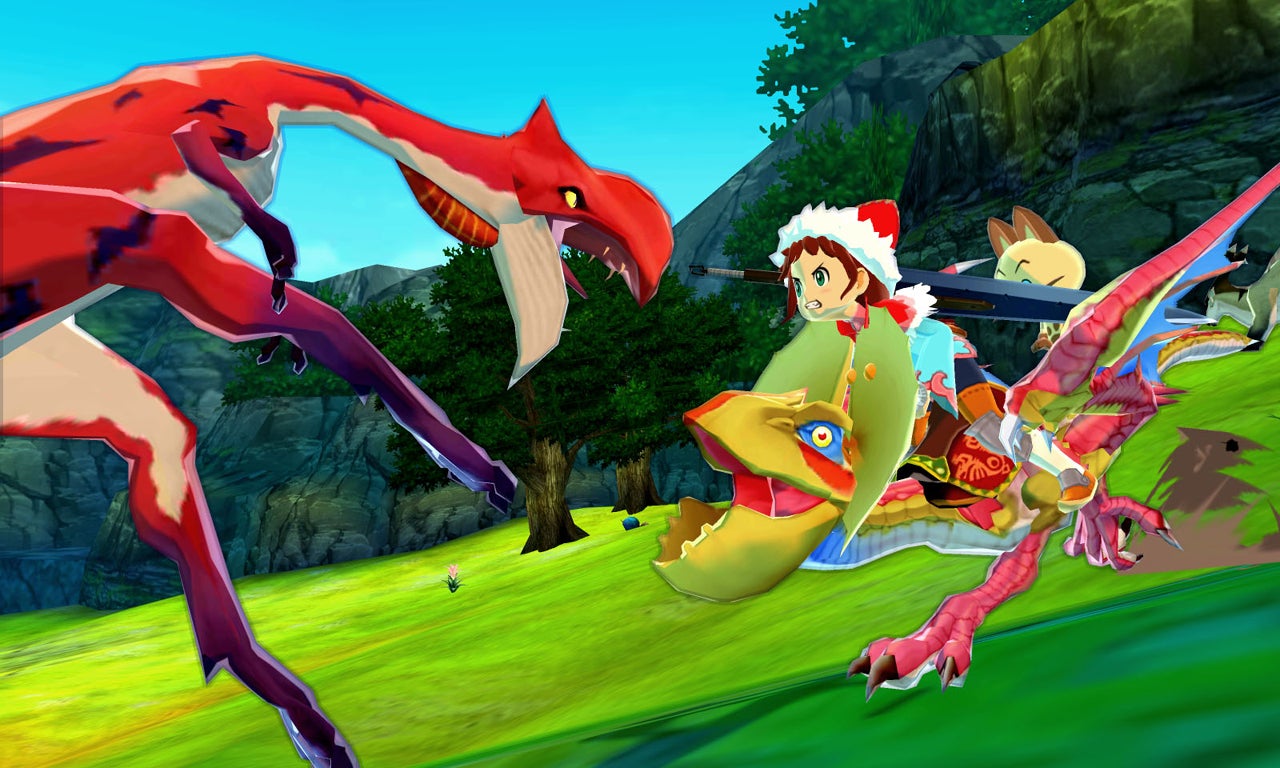 Having grown up with the likes of Pokemon and Final Fantasy, Monster Hunter Stories’ battle system felt immediately accessible to me. At its heart, it’s incredibly simple, with only a single rider and monster in your party at any given time. This limited roster means I never felt overwhelmed, knowing exactly which option worth taking to achieve victory. It’s also really satisfying, with each encounter rewarding me with plentiful experience and loot for later use.

Once born at the nearby hatchery, monsters can be added to your party whenever you like. I found myself always swapping different creatures into battle, experimenting with moves and combos that, while simplistic, were always fun to pull off. You have three basic methods of attack: speed, skill and power. Learning the attack patterns of enemies is crucial, as the three aforementioned variants are essentially ingredients in a violent game of rock, paper, scissors.

This is where the majority of depth in battles comes from, which is both a blessing and a curse. Every monster, be it a minion or a late-game boss, has a specific method of attack worth adapting to. Once you know this it’s easy to gain advantage in battle, relying on a strategy that can grow repetitive in longer bouts. Luckily, I found Stories to be fast-paced enough that it never felt too tiresome. A touch of the X button also speeds up combat, a brilliant tool for those wishing to grinding some extra levels. 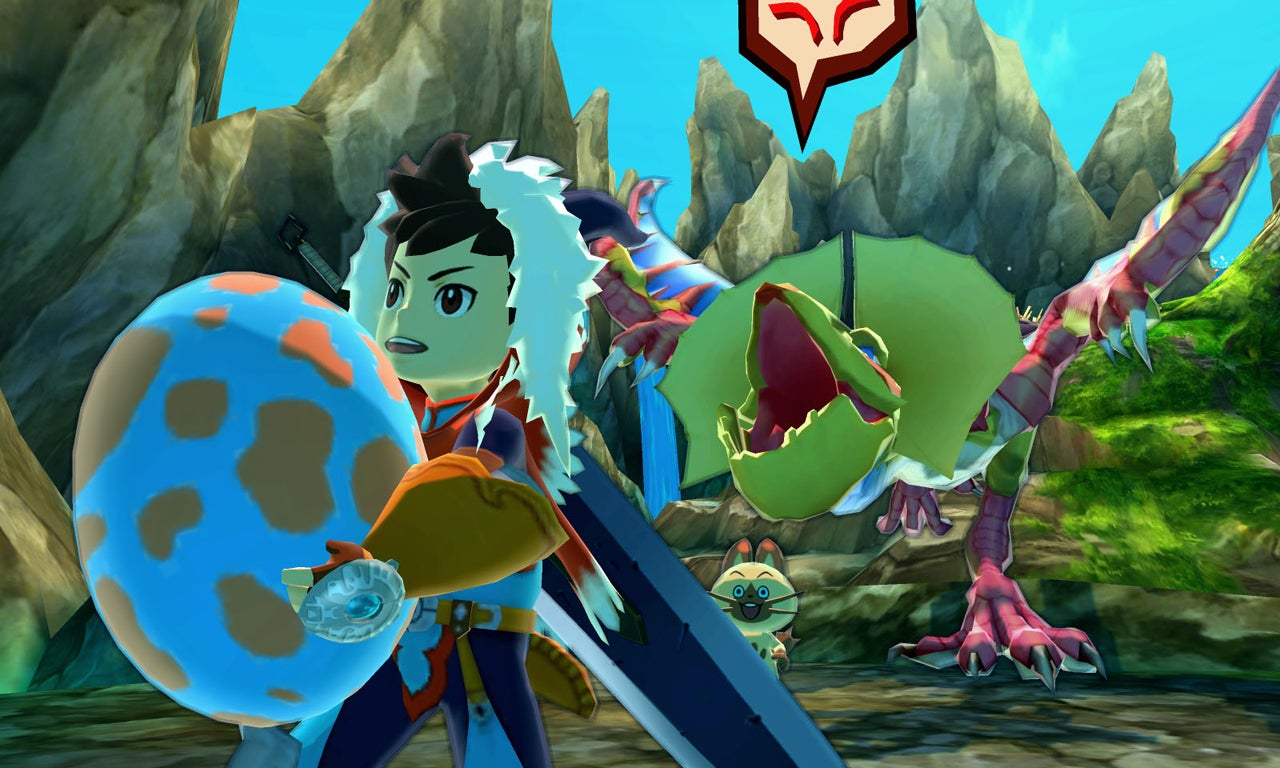 Performing the same style of attack alongside your monster will lead to a devastating team strike, dealing massive damage while showcasing an equally flashy animation. Doing so will also increase the kinship gauge. Once full this allows you to mount your neighbouring monster, increasing their combined, health, attack and defense. Sometimes they’ll engage in head-to-head attacks, requiring me to mash the A button in a contest of intense speed and dexterity.

To me, this was paramount in later boss battles, requiring a keen awareness of enemy attack patterns and weaknesses to emerge unscathed. While I was free to perform specific moves whenever I liked, I never felt a reason to expand beyond the usual trio of attacks. I do wish battles had more variety, providing the player with a reason to collect all monsters across the world beyond a morbid fascination for completion.

Speaking of monsters, you can collect their eggs from procedurally-generated dens spread across the open world. These can differ in rarity, meaning it’s brilliant to stumble across a rare den alongside a cluster full of uncommon spoils. You can only take one egg from the nest at once, which are often populated by enemies eager to protect their unborn children.  These mini-dungeons are an occasional treat to explore and are always plentiful in extra goodies and experience. 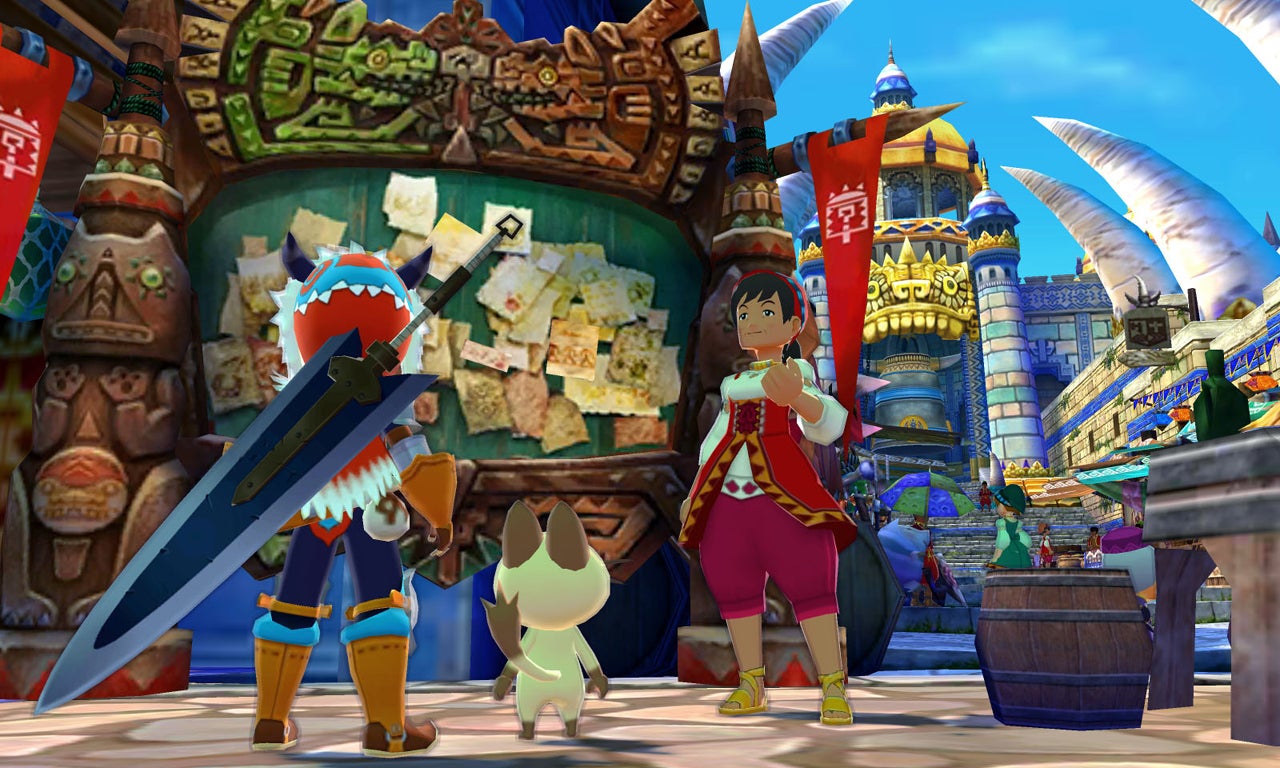 Monsters aren’t only used in combat, they’re also our primary use of transportation. Riding atop these majestic creatures is a little fiddly to control, but their suite of advantageous abilities make up for this clumsiness. Some monsters can jump atop platforms while others can discover hidden treasure or scare off nearby enemies. These are easy to use and well-implemented, feeling like a natural part of a rider’s arsenal.

Stories does an excellent job of streamlining an array of initially daunting Monster Hunter mechanics. Gathering resources is now done with a single button while towns and cities are relatively compact when it comes to discovering shops, objectives and sidequests. The latter of which are plentiful, and arguably essential to gaining an experience foothold during the opening hours. Sadly, they always follow a generic template of collecting things, killing monsters and returning to sender. It grows boring, and doesn’t feel particularly refreshing

Despite its attractive visuals, Monster Hunter Stories fails to hold up a consistent level of performance on a standard Nintendo 3DS XL. At times the frame rate is rock solid, but far too often it dips into lower digits across populated areas. It’s normal to see characters pop into view only seconds before you approach them, making the world feel stilted and artificial at times. It’s no dealbreaker, but perhaps Stories would be better served on more powerful hardware.

Monster Hunter Stories is a delightful little JRPG that makes a big splash with its adorable visuals and addictive battle system. Performance problems aside, this is a great introduction to Capcom’s beloved franchise.