Exclusive to Nintendo 3DS
It took me a while before I worked out what Monster Hunter Generations is. Is it a sequel? Not really. Even in a series where new instalments are closer to reboots than sequels, Generations stands out for its reuse of existing material and its disinterest in driving the basic gameplay forward. A greatest hits or a remix? Well, that’s closer, but still not quite there.

Monster Hunter Generations is more like the video game equivalent of a live double album, of the kind favoured by all globe-trotting rock bands in the ’70s, ’80s and ’90s. It has all the hits, though some come with new arrangements, plus some extra features, a few refinements, some unnecessary expansions and a few drum solos here and there. It’s a kind of smorgasbord of Monster Hunter goodness.

The one thing it doesn’t have is any kind of compelling story arc. Narrative has never been a Monster Hunter strength, or even much of a consideration, but both Monster Hunter 3 and Monster Hunter 4 went big on scene-setting clips and an early game that put you in a village with a desperate jumbo-sized pest-control situation, then tasked you with sorting it out. Both took the time to ease new players into the action and make you feel like the hero of the tale. Generations has tutorial missions, some heavy-duty signposting and an easy learning curve, but the linking story – you’re helping out with a monster research unit – never feels all that vital. 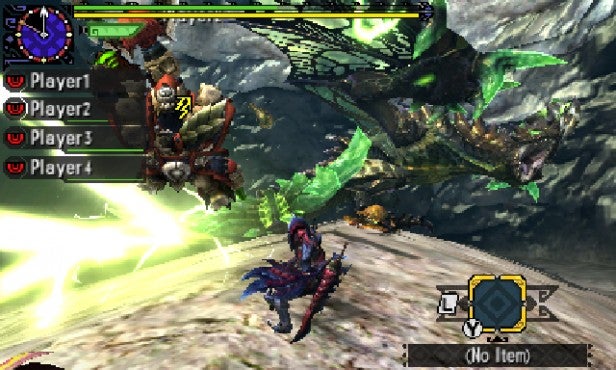 Early on I thought this was a problem, and it wasn’t my only concern. At first you get access to one village, where you can find quests, stores, smithies and your home base, plus a central offline and online quest hub. You need to progress through the village quests to increase your ranking, and the early missions are about as dull and over-familiar as they come. Off you trot into the Jurassic Frontier, grab your quest supplies then go off to grab mushrooms or mine for ore. The locations, flora and fauna will all give you a case of déjà vu, and even once your first honest-to-goodness monster-hunting quests come online you’re back in the realms of slaughtering 10 Maccao (a new bird-wyvern) or Jaggis before getting the chance to hunt a king-sized variation. If it feels like you’ve done it all before, it’s because you probably have.

What’s more, the old Monster Hunter problems continue to surface. Even with a new 3DS and secondary analogue stick, camera control and targeting takes getting used to, while the way each area is built from a series of discrete, linked locations rather than a single open world is only making the game feel more dated every time. If you’re looking for a next-generation Monster Hunter, the wait goes on.

This isn’t necessarily disastrous. Monster Hunter’s combat remains as rewarding as ever, each class of weapon requiring different skills and timing, and each beastie having its own attacks, specials, weaknesses and telltale animations. Picking between sword and shield, greatsword, insect glaive or switchaxe still gives you such a fundamentally different experience that it’s hard to know whether to try different arms for different monsters or simply specialise in the weapons you like best. In its own way, Monster Hunter is as satisfying in its combat as a Dark Souls or Bloodborne, though significantly less dark and gruesome. 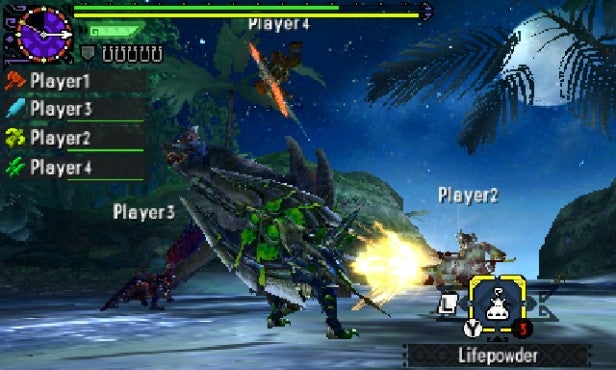 You can still recruit and train a stable of Felynes to give you back-up on solo adventures, taking them out to level up one or two at a time. On top of this, Generations introduces a new layer of Hunter Styles and Hunter Arts. Styles give you the choice of more traditional balanced or aggressive combat moves or modes that reward more acrobatic or skilful fighting. Arts are effectively special moves, giving you killer combos or evasive manoeuvres at a tap of a touchscreen icon.

What’s more, for the first time you can switch between playing the hunter and playing as a Felyne. Select your favourite, switch to Prowler mode and you can take them out on your next mission, using whatever weapons and equipment you’ve furnished them with. It’s clearly meant as an easy way in to the hunting experience, with less need to fuss about stamina or weapon sharpness, though bar a speedier combat style and their incessant mewling, the experience really isn’t all that different.

Despite these new additions, the first few hours can seem disappointing, as you settle down into the routine of hunting and gathering then using your rewards and scavenged material to move up a class of arms and armour. Sure, Monster Hunter Generations plays well, with the most accessible interface and best use of the touchscreen the series has ever had, but does it feel like a step on from the superb Monster Hunter 4 Ultimate? Not really. In fact, it can feel like those extra features are a substitute for a lack of identity. 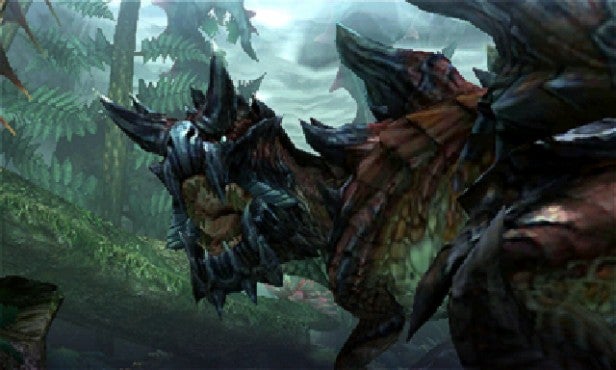 Get through that first run of quests, however, and Generations begins to gather pace. Three more villages, each with their own distinctive look and feel, open up, along with a range of new areas, and suddenly that over-familiarity no longer seems a problem. True, each has been pulled from earlier Monster Hunters – specifically the Monster Hunter Freedom and Portable games – but unless you’ve been with the series from its PSP beginnings that might not be such a big deal.

Even then, it helps that the scenery has never looked better and nor have the monsters, with Capcom apparently able to work miracles with the 3DS’s aging graphics hardware. It might not be a Witcher III or even Skyrim, but Generations’ misty hills, barren dunes and dank, cobwebbed caves still feel like convincing places, while the beasts – especially the big-hitters – are often beautifully designed. As you take on more quests, find ever sillier and more baroque gear and experiment with different weapons, styles and arts, the old addiction soon takes hold.

And it’s at this point where Generations’ biggest weakness – its lack of identity and of one continuous story thread – becomes a kind of strength. The lack of barriers and some brilliant, fast touchscreen shortcuts encourage you to keep moving between villages, taking on requests and dipping in and out of the different areas and their different challenges. At times the gameplay can still feel grindy, but the lure of tracking down a huge monster, paintballing them and wearing them down, often taking them out just before they do the same to you, remains as strong as ever. 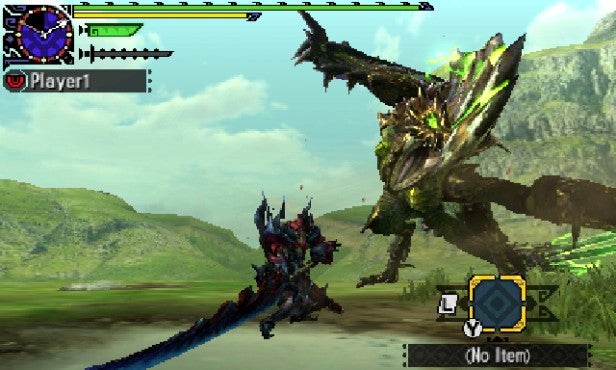 In fact, the same extends to Generations’ multiplayer. Going to the online hub isn’t any more difficult than going to a village, and it’s easy to join ad-hoc games, take on a quest and join one-to-three other players in battle. Not only will you get the chance to tackle monsters that you’d struggle to fight with your current skills and gear, but there’s something even more thrilling about working together to bring down some screen-filling fiend, the ranged weapon specialists blasting away while the heavy-hitters run in to hack away. Victory feels all the sweeter shared. And when it comes to it, Generations still knows how to roll out the bestial stars, with returning favourites joined by some of the most spectacular and challenging monsters Capcom has ever produced.

Is this the ultimate Monster Hunter or the best Monster Hunter yet? Well, much as I like the enhanced visuals and new systems, Monster Hunter: Generations doesn’t have the focus or atmosphere of Monster Hunter 4 Ultimate. Indeed, the latter remains the best entry point for beginners and arguably the high point of the series as a whole. With its refinements and Prowler mode, however, Generations is still a great entry point for noobs, while the all-in banquet approach and easy online play should be enough draw for the faithful fans. It might not be the best, but second best is more than good enough.

Get past a slightly drab, disappointing early section and you’ll find a feast of Monster Hunter fun. While you’ll miss the narrative thread and focused gameplay of Monster Hunter 4 Ultimate, Generations makes up for it with a wider set of diverse locations, some fantastic monsters and impressive graphics, not to mention some additional layers of complexity which don’t make the game less accessible. Other additions, like Prowler mode, are more superficial, but if they bring more fans onboard, who really cares? Generations’ biggest failing is that it’s more of the same without a whole lot of real progression, but this is still Monster Hunter in all its glory and one of the last must-have games for the good old 3DS.