Exclusive to Nintendo 3DS
While there’s nothing obvious that’s revolutionary about Monster Hunter 4, there’s a lot going on beneath the surface. Rather than bolt a new setting and new features on the bones of Monster Hunter Tri, Capcom has quietly and cleverly disassembled the component parts of its game and reassembled them in a structure that’s both more welcoming to novices and a richer, deeper experience for fans. The result is easily the best game in the series, and one that easily circumvents the technical weaknesses of the 3DS.

Capcom hasn’t fussed around – or done anything else – with the basic formula. You’re still a young guy or girl who hunts monsters, taking quests from the guild in town, then leaving through a gateway to enter a wilderness crammed with dangerous beasties. Grabbing useful items from the item box, you explore the areas, defending yourself where necessary, gathering crafting ingredients from the landscape and monster corpses, all the while looking for your quarry. When you find them, you slay them, whacking them with your current weapon while blocking and rolling to avoid their various attacks. Come out victorious and the mission ends, before the whole cycle begins again. 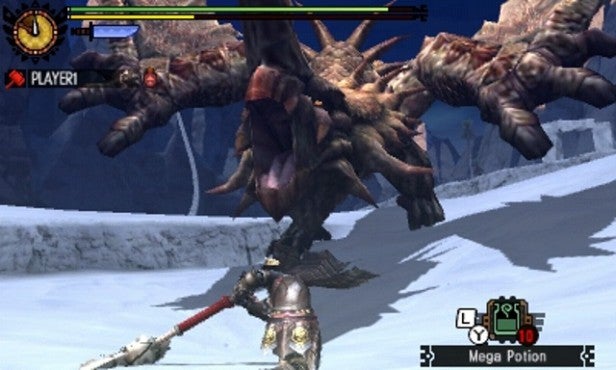 Monster Hunter Tri did its best to ease new players in, but the sequel does it all much better. Not only do we get a tutorial that doubles as a spectacular intro sequence, but all the core concepts and controls are introduced steadily and surely, at a pace even Monster Hunter newbies should be able to manage. The difficulty curve is noticeably smoother too; most competent gamers should make it through their first battles without a trip on the ‘cart o’ shame’ that picks you up when you’re bleeding out. Where even Monster Hunter Tri had a difficulty hump that had to be crested before the game really came alive, Monster Hunter 4 gets you slaughtering, crafting and wandering around with monster bone weapons in monster bone armour before the first few hours are up.

At first it might seem oddly constrictive, as you wander around town, buy and sell your supplies, upgrade or replace your equipment then go out to the opening steppes area to quest. Monster Hunter still hasn’t embraced an open world style of gameplay, instead making each area a maze of linked locations. Before long, though, you’ll be able to go to the guildhall and take on more challenging quests in new areas, or go on expeditions – simpler, point-to-point missions where you have one key objective to complete and a wagon to pick you up at level’s end. 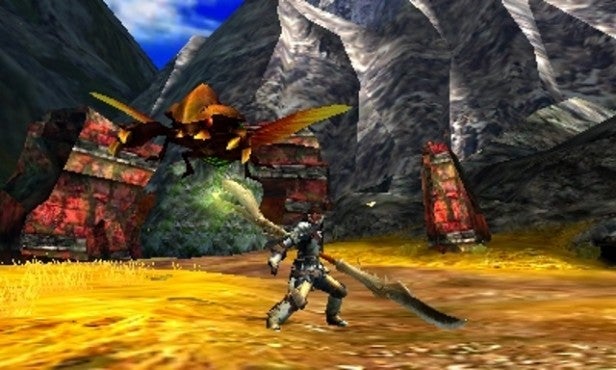 What’s more, the steppe gives you a chance to get used to the major new mechanics of Monster Hunter 4. For a start, you can climb, working your way up vertical surfaces to reach new locations, get a respite from danger or gain a good vantage point from which to strike. This goes hand-in-hand with a new mounting mechanic, where you can leap onto a monster’s back then repeatedly whack them, holding the right shoulder button when they try to throw you off. It’s a satisfying way to take down larger monsters – and sometimes the only realistic way.

With time and good results, your boss – the cheerful Caravaneer – will announce that it’s time to move on, taking you to a new town and a new bunch of quests. This is a vast game, squeezing a stream of missions out of each location, and constantly adding new enemies that will stretch your skills and your ability to build effective strategies. Yet Monster Hunter 4’s staying power isn’t really in its breadth, but in its depth. What you’re doing might be simple, but a whole range of complex systems supports your monster slaying. 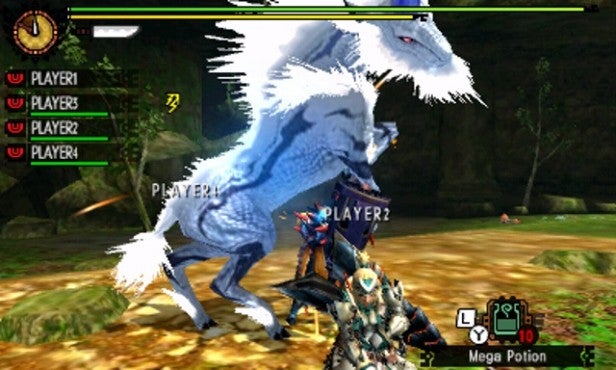 Take the combat, for example. There are now fourteen different weapon classes in the game, each requiring a different approach, different timing and a different strategy. Knowing when to pack a bow or gun and when to pull out a greatsword is part of the monster hunter’s art. Some weapons lend themselves to fast, repeated attacks that keep a monster off its feet, while others require a more deliberate execution and the building up of devastating combos.

Monster Hunter Tri introduced the Switch-Axe, a sword that transformed into an axe, and now Monster Hunter 4 adds the Insect Glaive – a bug-powered staff with energy-draining range attacks and pole-vault applications – and the Charge Blade – a shield come sword come pole arm capable of delivering some truly vicious blows. 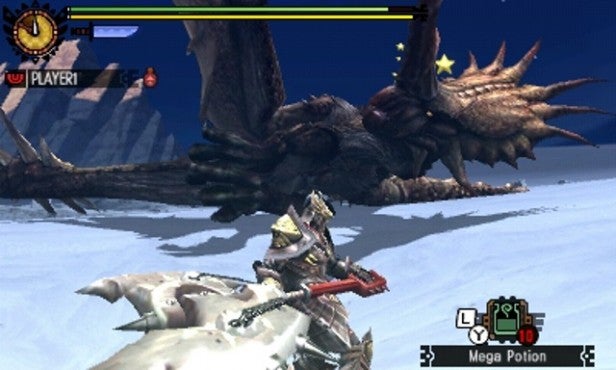 Or how about the cooking? In town, chefs can furnish you with a tasty meal to keep you fed on your next quest, and the ingredients you choose and any vouchers you apply will bring you different perks depending on the individual combination. The same kind of detail goes into everything from the custom weapons and armour you can buy from the town blacksmith (no monster part ever goes to waste), to the way that old, rusted pieces can be upcycled and given a new lease of life.

Most of all, we love Monster Hunter 4’s Felyne comrades; a growing squad of cat-like companions you can take with you on missions, one at a time, and train up. They won’t kill many monsters for you, but they’re surprisingly effective as a distraction, taking some of the heat off you during battles so that you can heal, change tactics and take down your quarry. What’s more, you can dress them up in a variety of silly armours to keep yourself amused. 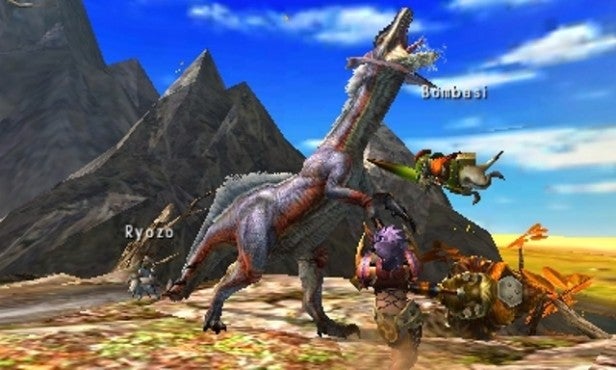 Monster Hunter 4 could easily have been a tedious, repetitive, grindy sort of game, but instead it’s incredibly more-ish in ways that fans of Destiny or Dark Souls might appreciate. It soon becomes a compulsive single-player game, and Capcom has integrated local and online co-op too, albeit through a slightly confusing system of online guildhalls that doesn’t make it as easy as it might be to find a game. It’s better played with friends over a local Wi-Fi connection if you can – without good communications, playing together can be bewildering – but it’s not hard to fathom the appeal of tackling the larger beasts in groups of two, three or four.

This is also one of the most visually impressive games on the 3DS. True, the blocky textures, flat lighting and low levels of visual detail ensure that you won’t think you’re looking at a last-gen console game, but Capcom makes up for it through fantastic creature design, some brilliantly conceived towns and the expert use of colour. In a lot of ways, Monster Hunter 4 reminds us of Final Fantasy XII on the PS2, which we would say was quite the compliment. 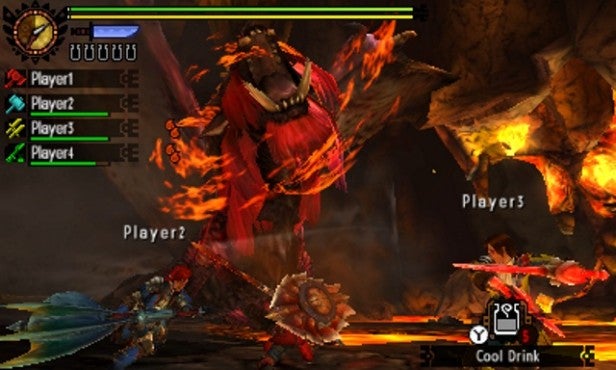 While more rabid Monster Hunter fans might differ, we won’t claim that this fourth installment is entirely flawless. The camera is still a pain, and doubly so if you haven’t got a New Nintendo 3DS or a Circle Pad Pro. You can lock onto larger monsters, but tackling groups of small but vicious critters requires a lot of manual control. The way that areas are structured as discrete locations also breaks up the flow and makes the world feel less real; we’d love to see a more free-roaming approach in Monster Hunter 5.

Verdict
Monster Hunter 4 is brilliant, being both more accessible to beginners and a more complex, exciting game for long-term fans. Some aspects, like the combat, structure and camera, ensure that it’s never going to please everyone, but of all the games in the series, this is the one that comes closest. It’s another corker for the 3DS games library, and the perfect way to try the noble sport of monster hunting on for size.