The Monitor Audio i-deck 100 is a high-end iPod dock aimed at giving you the best audio quality in the smallest package. Retailing for around £300, it’s definitely got the premium end of the bargain sorted but what about the rest of the package?

Monitor Audio is well known for creating high-class Hi-Fi speakers so it’s no surprise to find the i-deck 100 is a classy-looking and well-built machine. Its overall shape is all too familiar, with it looking distinctly like a cross between the JBL OnBeat and TEAC SR80i Mini Aurb, amongst others. Nonetheless, it manages to maintain a style all of its own – we’re particularly fond of the chrome waves that encircle the dock. 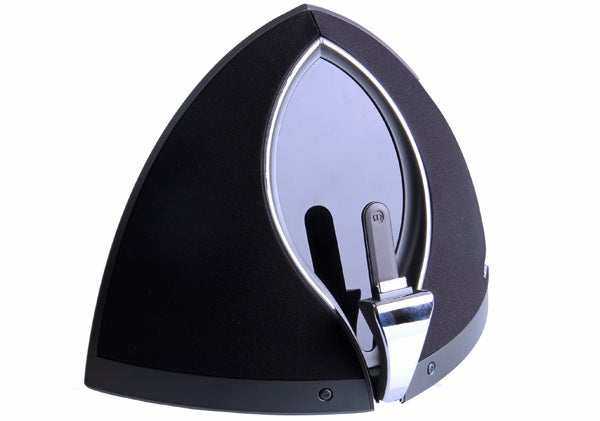 As well as looking similar to these two docks, it also matches them for size – with dimensions of 320 x 210 x 245mm – which is to say they’re a step down in bulk from the likes of the B&W Zeppelin Air. However, this isn’t to suggest this is a weedy alternative. While it doesn’t have quite the weight of the larger docks it’s still a hefty 2.86Kg machine.

That said, it is a little more plasticky than some in this price range. Glossy black plastic covers the majority of the elegantly curved back, as well as filling the panel behind the dock mechanism. Not only do these parts pick up fingerprints (and probably scratches) easily, they just don’t feel quite as sturdy as wood or metal alternatives. It would be pushing it very far to suggest the i-deck isn’t well made but the choice of plastic here was certainly not the wisest. 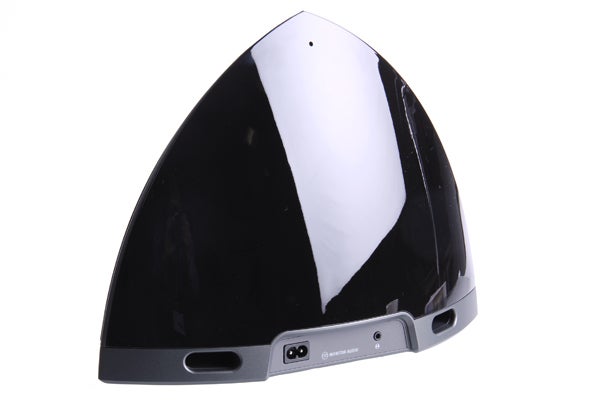 The remote is also just a notch below what we might expect thanks to its use of rather mushy rubber buttons. Its curvaceous design is a little over the top as well – it generally isn’t a desirable feature of a remote control that it resembles a Gomboc (an object that always rights itself).

Mushiness of button isn’t the only problem with the remote. There’s also rather a lack of buttons. You get power, volume, play/pause, forward and back (tap to skip tracks, hold down to scan through tracks) and auxiliary input selection. You don’t, however, get any way of fully navigating your music library; i.e. you can’t back up a level to select a different album. 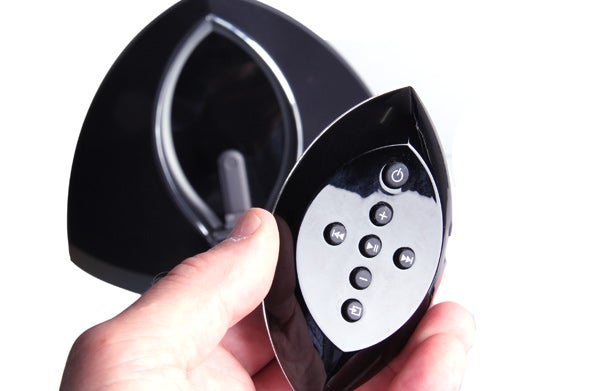 The lack of controls also reaffirms that this is a pure iPod dock with no extras such as radio, internet connectivity or alarm clock features. You get one 3.5mm jack on the back as an auxiliary input and that’s it.

The quality of one aspect of the Monitor Audio i-deck 100 cannot be faulted – the dock mechanism is superb. It is, a complete copy of that used on the B&W Zeppelin, but we won’t complain one jot – just so long as the two companies are happy with each other then all’s rosy. The key to its brilliance comes down to three factors. 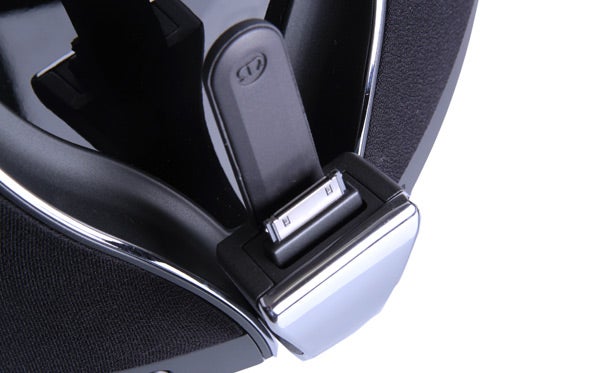 The first is the sprung dock and rubber back plate combination; when you dock your device the spring gently pushes it against the stalk behind, which has a nice deep and soft rubber finish to keep your device safe. This not only makes for a secure hold but it also leads to the second benefit which is that you don’t have need for any dock inserts as on most alternatives – it’s completely universal. You can fit everything from an iPod nano to an iPad 2 into it, though you will admittedly have to be a little careful with the latter. The third and final advantage of this system is that the stalk gives you somewhere to rest your fingers to steady your hand, so you can navigate your device, without putting any strain on the dock connector itself.

Turn the Monitor Audio i-deck 100 on and you’re greeted by one of the oddest power-on chimes we’ve ever encountered. It emits three successive tones of about half a second in length; starting at 70Hz, then 85Hz and finishing with at 100Hz. It’s not in any way unpleasant but it’s just very peculiar, and due to the low pitch of the tones it is somewhat reminiscent of being greeted by a fart chorus.

With that awkward moment out the way, you can then navigate to your music and get to enjoying what this dock is all about; its sound quality. And what quality it is. 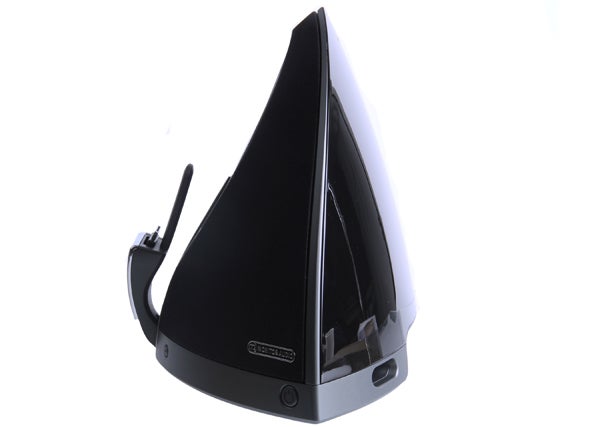 Thanks largely to its onboard digital sound processor that bypasses your iDevice’s mediocre DACs and takes on the task of turning your music files into analogue sound waves all by itself, Monitor Audio has managed to create a very pure crystalline sound that produces masses of detail. This in particular brings acoustic guitar and female vocals to life like no similar sized dock we’ve heard. The way it reproduces the saccharin sweet tones of Corrine Bailey Rae – Like A Star is quite staggering and La Roux’s quirky vocal styling brought a shiver down our collective spines.

Helping to do this is a pinhole microphone that sits on the back of the device and listens to the acoustics of the room, making sure the signal it produces is best suited to the space its in.

However, this detail and clarity, produced from the i-deck’s twin pairs of 1in tweeters and 4in woofers isn’t matched by the rest of the performance. The biggest problem is the lacking soundstage, which takes the edge off more expansive works – even solo piano and chamber music can sound restrictedly narrow. Were there a bit more stereo presence then this dock could be held up as a great listen for audio purists – those who aren’t after booming bass – but as it stands it doesn’t quite cut it. Strangely, it manages to fill a room, with some of the atmospherics floating around you to good effect but it just doesn’t give you a true sense of presence within the music.

As you may have guessed, a further issue – which is a much more intentional and acceptable one – is that bass isn’t very hard hitting. Not that you’d expect huge bass presence from a device of this size but there’s a lack of oomph that means anything that requires a bit of gusto falls a little flat. Rock, dance, heavy metal; all left us feeling a bit cold.

This is something Monitor Audio fully accepts though and it points out that the £400 Monitor Audio i-deck 200 is much better suited for those that want a larger overall sound.

Also this is not to say the i-deck 100 can’t fill a modest sized room. Again this is helped by that digital processing that this time analyses the music signal and looks for peaks that might distort if played at the current volume then just tones them down a little bit. As such you can maintain an earsplitting overall volume without distortion.

When all is said and done, though, this is a modest-size iPod dock best suited to a modest-size room to be played at modest volume. In other words it’s perfect as a premium kitchen or dining room dock. Or at least it would be if it was priced a little more competitively. At £299, it’s about £50 too expensive, as the likes of the B&W Zeppelin Mini offer more features, better build quality and equally good sound for the price.

The Monitor Audio i-deck 100 is a very accomplished compact and premium iPod dock, offering stylish design, good build quality and exceptional audio clarity. However, it doesn’t quite match a couple of its competitors for build and functionality, and its sound is a little more specialised, with those into their hard hitting pop and rock best steering clear. As such, we feel its £299 asking price is about £50 too expensive.