What is the Monitor Audio Airstream A100?

The A100 is a network-enabled amplifier that bridges the gap between digital music streaming and audiophile hi-fi – two areas of the audio market that haven’t always gone hand in hand. It’s Monitor Audio’s first dedicated stereo amp and comes hot on the heels of the sublime ASB-2 soundbar.

Not only is the A100 a versatile music system, playing tunes via AirPlay, DLNA and physical connections, but it can also be used as an upgrade for your TV speakers, lending extra power and finesse to movie playback.

At £400, it’s in the same ball park as several top-end soundbars and bases, but the A100 doesn’t come with speakers, which will up the price if you’re starting from scratch – although Monitor Audio has plenty to choose from. 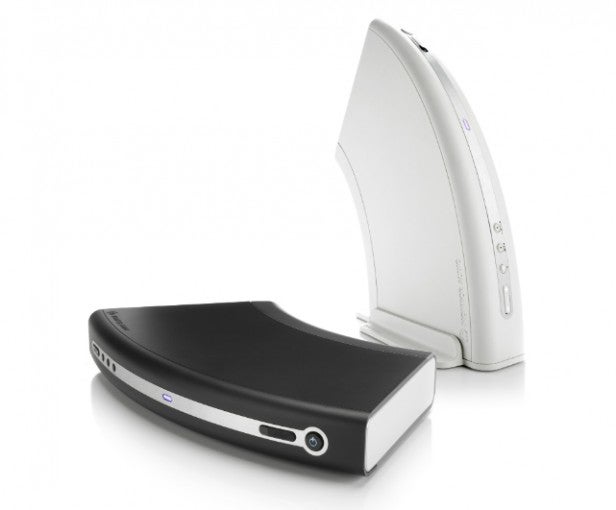 The A100’s daring design makes it quite unlike any amp we’ve ever seen. The chic curved bodywork and glitzy silver detailing on the front and side panels are pure eye candy, while the compact size (40mm high by 205mm deep) won’t make huge demands on your space. Our sample sports a white finish, but for our money the alternative black version is more striking.

The casing is made from rigid polymer and die-cast aluminium, giving it the sense of heft and solidity we expect from a high-end product (as well as acting as a silent heat sink) while toughened glass trims protect the unit at each end. You can lay the A100 flat on its rubber pads or stand it upright using the supplied base, which is useful for desktop or shelf placement. Either way, it looks stunning. 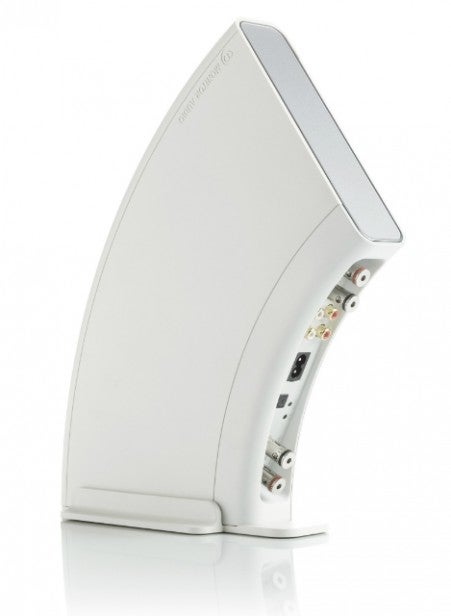 Within the silver strip on the front is a series of small buttons including for AirPlay setup, volume and two for input selection (one toggles through the digital inputs, the other analogue). On the right are a USB port (protected by a rubber plug) and a large power button, while a pill-shaped light in the middle glows in different colours to denote the selected input and status. This makes the front panel look suitably minimal, but an LED display would have been easier to understand.

Rear connections include an optical digital input – essential if you want to hook up your TV or Blu-ray deck – plus analogue stereo input and output, the latter allowing you to connect an external subwoofer. These are flanked by two pairs of secure spring-loaded binding posts. This cramped rear panel makes cable connection a little fiddly.

The A100’s built-in Wi-Fi (802.11 b/g) and AirPlay support let you stream music from the usual Apple devices (iPhone, iPod touch, iPad and Mac) as well as PCs running iTunes. This also makes it possible to stream music to several A100s in a multiroom setup. If you want to avoid going through your router, no problem – Airstream Direct provides a peer-to-peer connection with iOS devices. 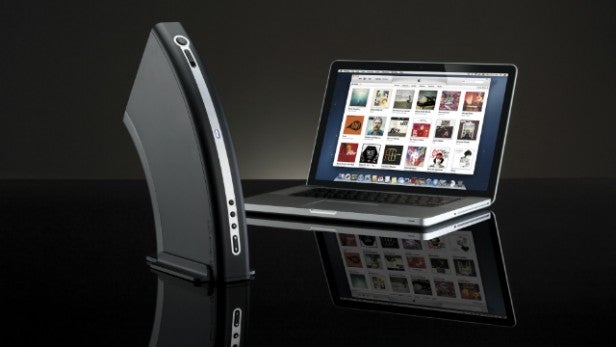 The A100 is also DLNA compatible, so you can stream music using any third-party DLNA app on iOS, Android or Windows devices. However there’s no Bluetooth, so if your Wi-Fi starts playing up there’s no wireless back-up. That’s because Apple didn’t allow Bluetooth and AirPlay to be included in the same product when the A100 was first conceived, but it has since changed its stance. Perhaps we can expect both on Airstream Mark 2.

The list of supported audio formats is excellent – MP3, WMA, AAC, FLAC, ALAC, Ogg Vorbis and LPCM. High resolution files are also supported via DLNA and USB (up to 192kHz/24-bit). You can also charge and play music from devices connected to the USB port.

On the technical side the A100 kicks out 2 x 50W from its Class A/B amplifier, with a high-resolution DAC on board for good measure. Monitor Audio says it’ll comfortably drive all but the largest of speakers. 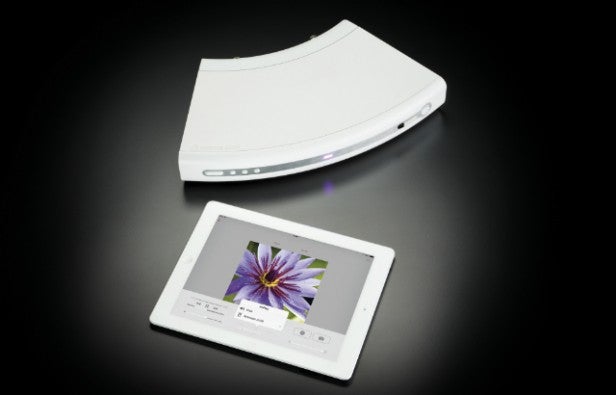 If you’re using the A100 with an iOS device, AirPlay setup is a piece of cake thanks to Wi-Fi sharing. Just connect the device to the USB port, press the Wi-Fi button on the back of the A100 and a dialogue box appears on the device asking if you want to share Wi-Fi settings. Job done.

It’s even easier using Airstream Direct. Hit the Wi-Fi button on the back of the A100 then select ‘Airstream’ from the list of Wi-Fi connections in the iOS device’s setup menu. The A100 should then appear in the list of AirPlay devices.

But if you’re not using an iOS device, Wi-Fi setup can be a laborious process. You have to hold down the Wi-Fi button on the back for 12 seconds – which is awkward given that it’s flush to the surface of the rear panel and tucked under the cables – then connect your PC or Mac to the A100 wirelessly, enter an IP address and configure the settings in a browser window. This could all be too much for a technophobe to take.

It doesn’t help that you’re relying on the front LED to work out what’s going on. A few times we found ourselves staring blankly at a blinking red light.

But once connected, operation is a breeze. The eye-catching oval-shaped remote is styled in gloss black with a silver/grey underside, but thankfully it’s not a case of form over function – the ergonomic shape fits snugly in the hand, while the clearly-labelled buttons are sensibly arranged. Play/pause and track skip keys come in handy when listening to music from a USB-attached device. 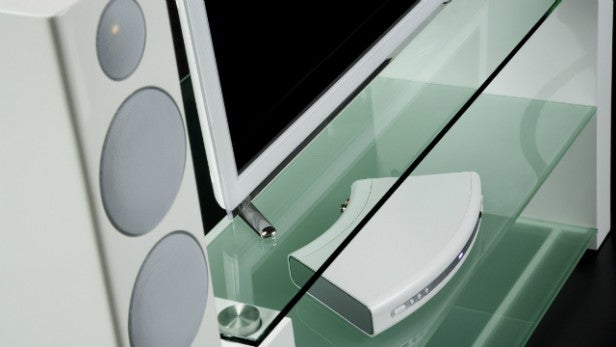 During our test we didn’t have any trouble streaming tracks via AirPlay, Airstream Direct or DLNA thanks to the stable Wi-Fi connection. However, while listening to tunes from an iPod Nano 7G connected via USB, the A100 missed the very start of each track, picking up playback a couple seconds in. That’s particularly annoying when listening to albums that flow seamlessly into each other. It also briefly cut out in the middle of a track on several occasions.

But in terms of audio performance, there are no problems whatsoever. The A100’s sound is smooth and insightful, but with enough power and punch to make movies sound thrilling. We rigged it up to speakers of different shapes and sizes, including the B&W 684, Q Acoustics 2010i and Monitor Audio’s Radius 270 (with a Radius 380 subwoofer in tow) and it had more than enough grunt to comfortably drive each setup.

We settled on the Radius speakers (above) and fired up Thor: The Dark World on Blu-ray. When it cuts to the battle raging at Vanaheim, the A100 handles the hectic action with a dynamic, lively character – lasers fizz vigorously across the wide soundstage, while the clean, open ‘clang’ of colliding swords sounds realistically metallic.

These effects are dispatched with real bite but the A100’s remarkable composure means they never sound harsh or resonant, which keeps the sound listenable even at high volumes – and it certainly goes loud when you need it to. God help your neighbours. 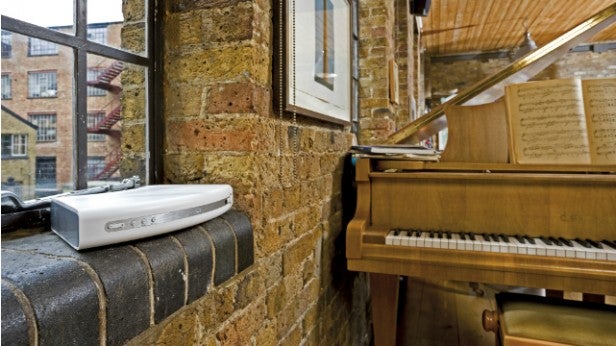 The A100 also demonstrates excellent scale, making explosions sound big and weighty, especially when Thor thumps his hammer onto the ground or when the Bifrost slams down from outer space. It depends on the capabilities of your speakers, but we felt our Radius pair just needed a little leg-up from the subwoofer, just to give it some extra oomph.

Another of the A100’s assets is its terrific treble reproduction. Crisp, sparkling highs breathe life into every scene and keep dullness from the door, plus it brings out subtle textures that more heavy-handed amps overlook. But it doesn’t overdo it – there’s a nice balance right across the spectrum.

This translates into spellbinding two-channel music playback. Whether it’s beamed via Wi-Fi or channelled through the analogue inputs, the A100’s sound is intoxicating. With Incognito’s Amplified Soul album, it displays terrific rhythmic ability, nailing the funky grooves with agile bass notes and punchy drums, while pin-sharp high-frequencies make the hi-hats and percussion twinkle. This blend of refinement, insight and dynamics makes the A100 a remarkably entertaining listen. 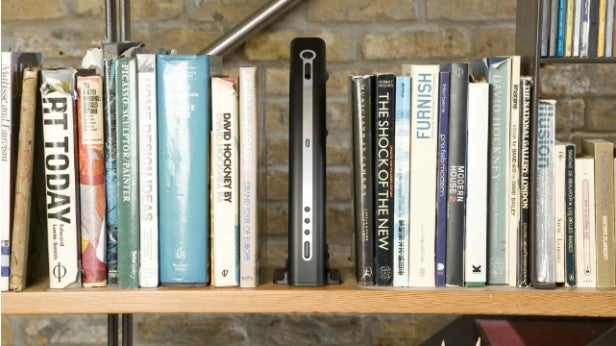 Should I buy the Monitor Audio Airstream A100?

Anyone searching for a sound system to perk up tired TV sonics is spoilt for choice right now. We’ve tested several excellent sound systems recently from the likes of Q Acoustics, Canton, Tannoy and Paradigm and we’re pleased to report that Monitor Audio’s A100 is right up there with the best of them.

We love its radical, eye-catching design, which sets it apart from virtually every other sound system on the market, while its luxurious build and generous connectivity options (including AirPlay) are other plus points. But we’re most impressed by the A100’s sumptuous sound quality, which is powerful but imbued with the sort of refinement and composure we’ve come to expect from other Monitor Audio products.

It’s not all rosy though. The A100 is distinctly Apple-centric, eschewing Bluetooth completely and making the non-iOS network setup procedure rather cumbersome – something not helped by the cryptic front panel display.

And if we’re comparing it with self-contained solutions like the Canton DM50, Tannoy BaseStation One or the Q Acoustics Q-BT3, the need to add speakers makes the A100 less convenient and cost-effective. Not to mention, it is of course only stereo, offering neither real nor virtual surround sound for movie watching. But once you hear it in action, such concerns might just pale into insignificance.

A top-drawer TV upgrade and music system in one, Monitor Audio’s AirPlay-equipped A100 delivers spellbinding sound quality and a chic, envelope-pushing design, but the lack of Bluetooth is a shame.