Climate change is an issue that’s constantly in the news. Just on the day I was putting this review together the headline on the BBC News web page stated that ‘Climate change fight ‘can’t wait’’. While cars shoulder a lot of the blame, it’s also wasteful things such as batteries that contribute. Rechargeable batteries are more eco-friendly, but many people are put off them because they’re expensive and inconvenient to recharge.


This is why a product such as these USB Cell batteries make so much sense. Our news Editor Gordon first revealed these back in September, and gave a comprehensive description of what these new types of batteries claim to be able to do. Having got hold of four of these in the office, the only thing that was needed to be done was to actually test them to see if they do as they claimed. 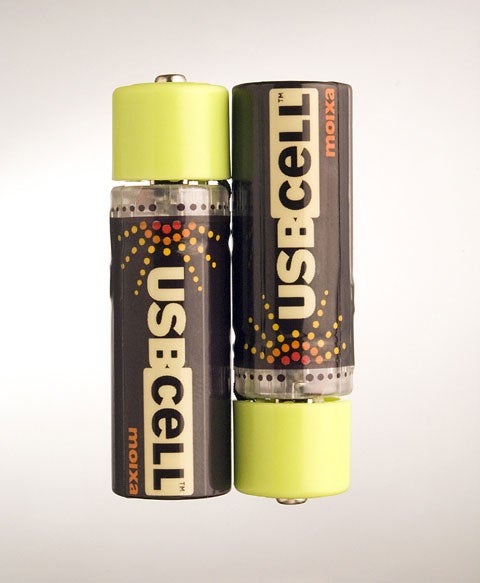 The concept is ingenious and one can only wonder why it’s taken this long for somebody to come out with them. Invented by a company called Moixa, the founder of which incidentally also created the foldable keyboard for PDAs, the USB Cells are Nickel Metal Hydride AA batteries that recharge over USB. They are, perhaps obviously, the same size as regular AA batteries – if they weren’t they wouldn’t be much use. What’s different is that the top pops off to reveal a standard USB port connector.


With USB ports appearing on every PC, laptop and even games consoles it makes it very convenient to charge them without having to faff around with a clunky wall charger. This will also saving weight and bulk when your travelling. It’s also quicker – while you often have to charge overnight in some conventional chargers, these claim to charge to 90 per cent in five hours. Finally, it’s environmentally friendly, as indicated by the Recyclable icon on the batteries


The only issue I can see is that you could have trouble fitting them into some recessed USB ports, but you can at worst charge in a regular NiMH charger, though this takes up to seven hours. Moixa recommends that you don’t put them in extra fast chargers that charge in less than two hours. In a USB port however, you can pop them in for half and hour and gain a significant charge.


The top of the battery comes off easily and is held in place by a piece of elastic. It feels like it could be pulled off it you really tried hard but it’s tough enough. However, after only brief use one of the metal covers for the USB plug came off revealing the bare connections underneath. The cover remained lodged itself in the lid. This only happened with one of the three batteries though. 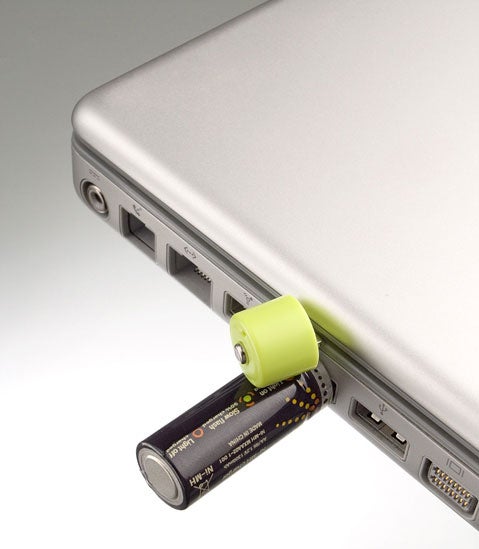 Once plugged in the batteries indicate they’re charging via a ring of yellow LED lights at the top of the main section. It’s clearly printed on the battery that the light indicates that the battery is charging, slowly flashes when 90 per cent charged and goes off when fully charged. However, I’ve yet to see this flashing – the light is either on or off. What would be even cooler though was if there was some way of finding out how much charge there was by looking at the battery itself – perhaps by pressing a button, like on some Duracell batteries.


When the batteries finish charging I found that they were very warm to the touch, though that’s what you would expect. I also found that you have to push them in firmly – the first time I thought they weren’t working but in fact they weren’t properly in the socket.

As Gordon stated, the batteries have a rating of 1300mAh (milliamp hours) which is good, though regular NiMh batteries can go as high as 2,500mah. The acid test for the batteries was to see how long they would last in a real world situation. To test then I fully charged four of the USB Cells and placed them in a Fujifilm FinePix S602Z. I then started to snapping pictures one after then other, using the LCD screen and the flash.


I was frankly, amazed how long the batteries lasted and I was snapping pictures for what seemed like hours. After a while the camera finally flashed up the battery flat icon and shut down. I placed the Compact Flash card inside my card reader and was surprised to find that I’d taken a simply astonishing 563 pictures. Admittedly, this was with continually pressing the shutter, while in more normal use the LCD panel would be on for longer while you compose shots. Even taking that into account this was remarkable staying power and even if you only got half of this it would be enough for a days use. 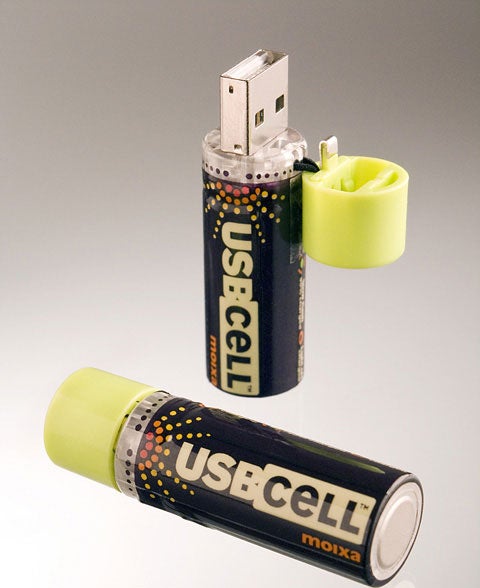 To compare I then tried a set of Duracell Alkaline batteries in the camera, only to find that they weren’t even strong enough to take more than a few pictures. It seems you need Duracall Plus or Ultra M3’s to deliver the amperage that a high power device such as a digital camera needs. This makes the USB Cells seems all the more impressive.


The only issue with the USB Cells is that at £12.99 they are on the expensive side, especially when you can pick up alkalines so cheaply these days. The fact that they’re only AA is also a fairly limiting factor as fewer devices run on AAs these days. There are some digital cameras that still use them, and devices like wireless keyboards, mice, and portable iPod speakers and for things like this the USB Cells are ideal. For example you can have one set in your keyboard or mouse and another set charged and on standby in a drawer.


What’s great is that Moixa has images on its web site of forthcoming versions – AAA batteries, 9V oblong batteries and perhaps most coolly, batteries for popular phones. That means no longer will you need to fill your travel bag with chargers – just the one for your laptop which then acts as your charging hub. 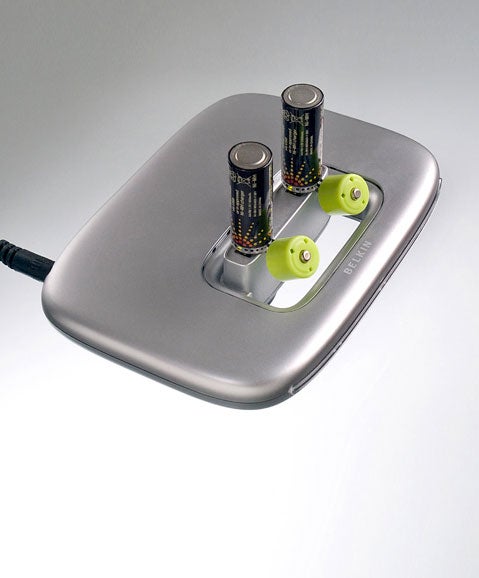 It’s also a far greener way of using power rather than just consistently buying and disposing of batteries. I for one, have draw full of batteries, especially as they’re needed for so many kids’ toys. (The toys are for my two year old – not for me. Well, at least most of them).


For a combination of convenience and eco-friendliness then the USB Cells get the thumbs up. Once a wider range becomes available and if the price can drop a little, then they’ll could well do for batteries what USB memory sticks did for floppy discs and virtually kill them off.


The Moixa USB Cell AA batteries are a great idea that’s well implemented. They’re a little pricey but the convenience of being able to charge from almost any USB port and do away with a bulky charger means you’ll soon want all batteries to be built this way – which judging from the USBCell web site may soon be the case.