This technology is laser lighting, which replaces the normal bulb illumination technologies to deliver what Mitsubishi claims is a very colour-rich picture while using much less power than conventional bulbs. Furthermore, whereas you’re lucky if conventional bulbs last for more than 4,000 hours, the lasers driving the 75in rear-pro TV Mitsubishi had on display are reckoned to last for 40,000 hours. Effectively the entire life of the product.

These are all potentially significant advantages, and it was pleasing, too, to see that from the front, at least, the Mitsubishi TV had managed to keep up with the LCD Joneses by sporting a very slim bezel. 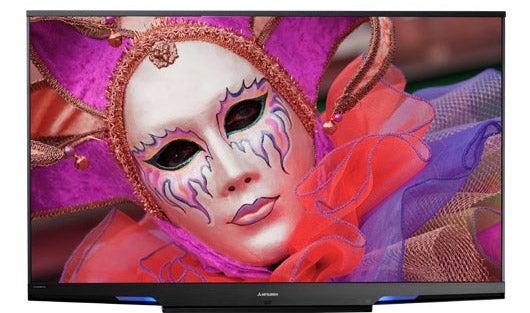 Not surprisingly, though, the slimness does not extend to the set’s rear. For while the 75in laser rear projection TV certainly doesn’t stick out as far as old CRT TVs or even most previous rear projection TVs, it’s certainly much deeper than any current flat TV, making wall-hanging a near impossibility.

The full HD screen is driven by DLP technology and three lasers, one each for the red, green and blue colour elements. Which should result in minimal if any sign of DLP’s rainbow effect.

In some ways the pictures from the Mitsubishi laser rear projection TV were eye-catching. They looked phenomenally sharp and detailed, with very good contrast and impressively uniform brightness levels, with none of the light ‘hot spots’ that used to trouble so many rear projection TVs.
Motion looked natural too, and there really didn’t appear to be any significant levels of rainbow effect. It was also nice after spending time with so many LCD TVs to be able to watch the picture from a wide angle without losing colour or contrast.

The main problem with the Mitsubishi rear projection set, though, was that aside from being so engagingly large, its pictures didn’t really blow us away. Just as with most previous rear projection TVs, its images looked a bit muted in brightness and colour ‘pop’ terms compared with the most vibrant pictures from other technologies. 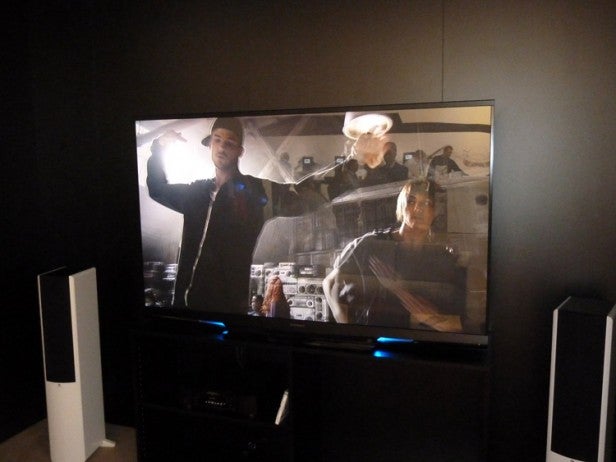 This isn’t necessarily a big problem in a domestic environment if you’re looking for a big screen to stick into a dark room. But it certainly didn’t do Mitsubishi many favours in the brightly lit environment of a huge show floor.

We were also rather troubled by how reflective the Mitsubishi’s screen was under the aforementioned harsh lighting conditions, and finally we spotted a few too many reminders of the sort of ‘glistening’ effect we used to see with many rear projection TVs in days gone by. In fact, if anything the problem seemed more pronounced than usual on Mitsubishi’s new laser-driven beast.

All in all, it has to be said that the laser lighting didn’t deliver the quantum leap forward for rear projection performance standards that we’d hoped it might. That’s not to say it’s a dead loss, though, by any means. After all, given how phenomenally expensive flat TVs can start to get once you get up above 70in, if Mitsubishi decides to launch its laser rear pro sets into Europe and can keep their price under control – the 75in model costs $9000 in the US – then they could offer a genuine affordable big-screen alternative to the megabucks likes of Panasonic’s 85in £50,000 85VX200 plasma TV. Moreover, if Mitsubishi really can cut the price of the technology, rear projection could once again offer a cheaper alternative to plasma and LCD even at the more modest, but still large, sizes of 50in-65in.