Having been very impressed by Mitsubishi’s strikingly affordable HC5500 LCD projector a few weeks ago, I have to admit to expecting great things as I started to unpack that projector’s bigger brother, the £1,900 HC6500. After all, this model boasts a (slightly) higher contrast ratio of 15000:1, which definitely has the potential to shift its performance up that crucial extra gear to get the HC6500 into ‘TrustedReviews Recommends’ territory.


According to its specifications, the HC6500 also runs more quietly than the HC5500, at just 17dB. This might seem a rather trivial point to raise so early on in a review, but I make no apologies for it. For as I write this I’m sat right next to the thing, with my speakers turned off and I can barely hear a whisper from it. Seriously, I think it’s the quietest projector I’ve ever heard – or rather, not heard. And since we know that the issue of running noise is a really key point for many of our readers, it’s only right and proper to flag up this terrific HC6500 talent right from the off. 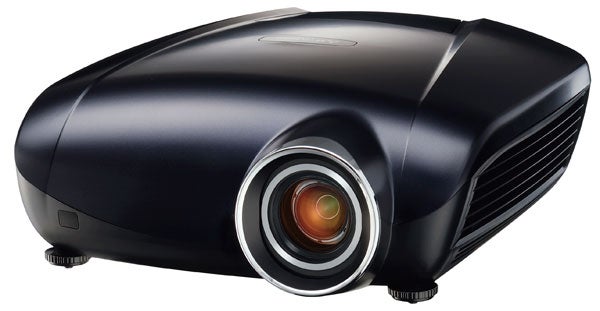 Getting back to a more ‘normal’ reviewing order of things, the HC6500 is not, it has to be said, a particularly pretty projector. Its bold mix of voluptuous curves, slightly ‘eggshell’ black finish and glinting lens surround sounds pretty tasty on paper. But a few curves can’t ultimately stop the projector from looking a touch clumsy and ill-proportioned. And once you get up close and personal, both the black and pseudo-metallic finishes look decidedly plasticky.


Connectivity is pretty decent. Two HDMIs will prove the options of choice for most of our readers, but there’s also a component video port, a D-SUB PC port, a 12V trigger out for driving a motorised screen arrangement, and an RS-232 Serial Bus for integration into a wider control system. Oh, plus there are the usual S-Video and composite video options for anyone daft enough to use them.


The true ‘power’ of the HC6500 starts to become apparent once you head into its oddly small but still nicely presented onscreen menus, and find rather more features than you’d probably bargained for.


For starters, the HC6500 proves exceptionally easy to set up thanks to fully motorised (and superbly flexible) zoom, focus and vertical image shifting tools, together with plenty of keystone correction – all accessible from the remote control. You even get a grid test pattern to help you get things just right.

I have to say that after a long weekend spent walking in the countryside trying to use fresh air to get rid of a seemingly never-ending cold, being able to get the HC6500’s picture perfectly positioned and focussed on my screen without having to shift my sorry butt off my chair was pretty much a dream come true.


The onscreen menus are packed with the sort of tweaks reviewers, installers and people who need to get out more absolutely love, too. Thematic gamma presets, Mosquito noise reduction, block noise reduction, ‘random’ noise reduction (!), colour transient improvement, auto iris on/off/specified level, two lamp level settings, video and film modes, overscan reduction/deactivation, the facility to adjust the image settings to suit an anamorphic screen, and even a degree of colour management to the red, green and blue colour elements via a gamma curve interface… all this and more is possible via the HC6500’s onscreen menus.


It’s actually a good job there is so much flexibility, too. For I have to say that in its ‘from the box’ state the HC6500 didn’t really do a lot for me. Colours just looked a bit peaky, somehow, the image felt a little unstable, and there also didn’t seem to be quite the dynamism to pictures that I was expecting. In fact, for a few minutes I was even thinking to myself that if this rather flat, jumpy picture is the price you have to pay for a practically silent projector, I’d rather have the noise back!


Fortunately a good 20 minutes or so in the company of a test signal generator and all those picture tweaks I just went to the trouble of listing had improved things no end.

The biggest area of improvement came with the projector’s colours. For with their rather cold, clinical and forced ‘edge’ taken off, they actually start to look very nice. Skin tones in particular get to a point where they’re exceptionally good for an affordable LCD projector, combining natural tones with outstanding blend subtlety, ensuring that there’s none of the patchiness or striping seen on weaker machines.


Colours also manage to get a satisfying sense of richness after our tweaks without compromising that all-important naturalism, and enjoy an impressive degree of balance. By which I mean that no single tone – red, green, blue, whatever – tends to look too dominant.


Another string to the HC6500’s bow is its terrific sharpness. The full HD resolution is put to immaculate use in bringing out every little joyful HD detail from high quality Blu-ray fare such as the recent release of Mamma Mia. Bought by my wife, obviously…


Every pore on faces, every ripple on the sea, every little spot of spittle sent flying as the stars murder Abba tunes… it’s all there in mesmerising, noise-free, pin-sharp detail. At least if you make sure you’ve got overscanning deactivated. This projector isn’t just HD’s friend, either. It’s actually also pretty accomplished at turning standard def TV shows into something its full HD native pixel count understands – thanks, no doubt, to its use of the seemingly ever-reliable HQV video processing engine.

Yet more good news finds the HC6500 handling motion with everything from straight PAL through to 1080p/24 HD with equal clarity and less judder than we’d expect for its price point.


In some ways the HC6500’s black levels are also very good by affordable LCD standards. But at the same time they’re really the only part of the HC6500’s picture makeup that I didn’t feel 100 per cent happy with.


What’s good about them is that they can definitely go a bit deeper than those of the HC5500, and suffer sufficiently little from the old LCD problem with grey mist, ensuring that dark scenes can be watched without you needing to worry about feeling that you’re missing out on loads of background details and image depth.


However, I also found that in order to get the image looking at its most dynamic, I had to use the Auto iris preset. Yet using this resulted in the picture shifting in brightness quite distractingly during scenes that feature rapid light changes over a cut or during a tracking shot.

In fact, as a result of this I preferred to leave the auto iris deactivated for the vast majority of time. But this causes its own problem, for without the automatic system in place, the picture doesn’t look quite as dynamic and balanced whenever a single shot contains a combination of bright and dark material. Finally, although the amount of greyness in dark areas is pretty insubstantial by LCD standards, there is still a trace of it.


I guess I should also say that just as it’s possible to radically improve picture quality through the extensive adjustments the HC6500 offers, it’s also possible to royally mess things up. But provided you try and only work with one part of the picture settings at a time, you should be OK.


When it’s at its best, the HC6500 really is a tremendous effort, combining terrific brightness levels with extreme sharpness and, post calibration, some exceptionally credible colours.


The only problem with the HC6500 for me is that unless you just can’t resist the HC6500’s extraordinarily quiet running noise, its pictures don’t quite provide enough of a leap forward from those of the HC5500 to justify its price hike. If Mitsubishi had given the HC6500 a price in the £1,500-£1,600 bracket, it would probably have bagged a Trusted Reviews recommendation.


Of course, this means that if you can find one being discounted to that sort of level at some point in the future, give it a go. You won’t be disappointed.