Mitsubishi’s latest Full HD home cinema projector arrives at a potentially inopportune moment. For with a price tag of around £1,200, it’s in the same entry-level ball park as a couple of other, really outstanding projectors we’ve seen in recent times: the £1,300 InFocus IN80 DLP model, and the £1,500 or so Sony VPL-HW10 SXRD model. Can this newcomer from one of the projector world’s more reclusive brands really compete with such high-profile Full HD competition?


If we were to commit the cardinal reviewing sin of judging a book by its cover, we would have to say that the HC5500 certainly does not compete with the best of its rivals. It’s not exactly ugly, but its fairly conventional black rectangular design and distinctive but not especially likeable square lens surround don’t put it in the same design league as the IN80 or HW10. Especially as it also feels rather flimsily built. 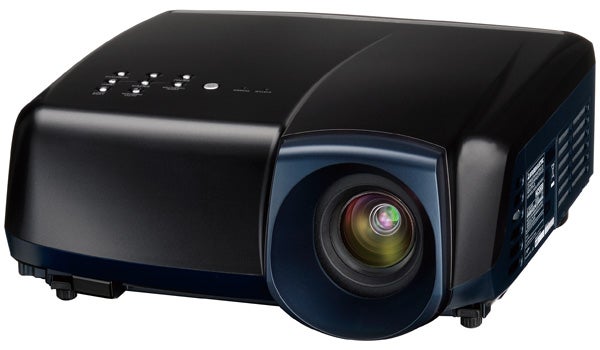 There’s nothing much to complain about when it comes to the HC5500’s connections, though. Two HDMIs built to the v1.3 standard join forces with a component video input; a D-Sub PC port; a trigger output for activating an optional electric screen; a Serial port so that the projector can be controlled by a computer in a networked environment; and the usual composite and S-Video fallbacks.


The HC5500 also boasts more features than you have a right to expect for south of £1,200. For instance, video processing comes courtesy of a ‘Hollywood Quality Video’ (HQV) chipset from Silicon Optix. Based on previous experience, this should come in particularly handy when watching standard definition images upscaled to the HC5500’s Full HD native resolution.


The tidily presented onscreen menus also include some very respectable image adjustment flexibility, kicking off with an excellent suite of gamma controls, complete with thematic presets plus two user modes where you can adjust the gamma levels separately for the high, mid and low portions of the gamma curve.

Then there’s the facility to adjust the contrast and brightness levels individually for the red, green and blue parts of the image, and an option for adjusting – over five stages – the extremity with which the projector’s automatic iris system does its work. In other words, you can adjust how much light the iris takes out of the image during dark scenes.


You can also turn the auto iris off completely, but given the damage this does to the projector’s black level response it’s hard to see why you’d ever bother, unless perhaps you were running a PC presentation.


The HC5500 is seemingly almost obsessive about keeping video noise out of its pictures, providing separate noise reduction options for block noise, mosquito noise, and general other video noise, as well as a colour transient improvement tool for correcting smeared edges.

Other bits and bobs include high and low lamp output settings (we’d recommend low for films if you’re in a properly blacked out environment), and an unusually flexible overscan adjustment that actually came in handy a couple of times for removing unwanted picture ‘sludge’ down the side of one or two of Sky’s 4:3 broadcasts.


In some ways we’ve slightly got ahead of ourselves here, for we’re talking about fine-tuning images before we’ve even got them up on our screen. But rest assured that the HC5500 is also very friendly with its more basic set up functions, providing motorised vertical image shifting, keystone correction and motorised focus.

The only potential installation issue is that the HC5500 has been designed with relatively small living rooms in mind and doesn’t carry a particularly great amount of optical zoom. So if you’ve got a screen of 100in or so and are looking at a throw distance in excess of 4m, you may struggle to get the HC5500 to produce an image that will fit on your screen. If you want to get into this in more detail, install and check out Mitsubishi’s projector calculator.


It doesn’t take long in the company of the HC5500’s pictures to realise that they’re very good for such an affordable machine. For instance, they’re really dynamic, with good brightness levels during bright scenes – even using the Low lamp mode – and the sort of black level depths during dark scenes that would have been unthinkable from LCD technology 12 months ago.


These black levels are presented with good stability, too, considering they’re dependent on an automatic iris, showing that the iris is reacting with a good combination of speed and sensitivity. 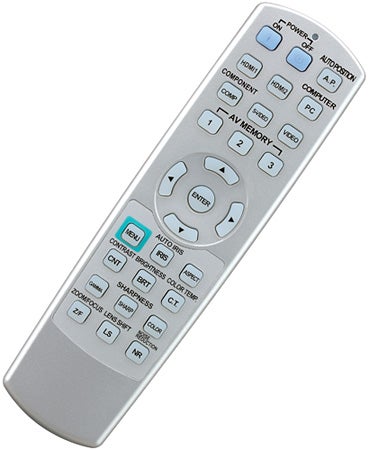 HD images also look very clean, with no sign of such common budget woes as grain, overt dot crawl, over-stressed edges or shimmering over extremely fine details. And happily, standard definition pictures hold up surprisingly well for such an affordable machine, as the HQV processors do their upscaling work while throwing up far fewer image artefacts than we commonly see with Full HD projectors. The noise reduction routines are also very astute at cutting out those classic Freeview/DVD nasties of MPEG blocking and mosquito noise.


Motion looks good too. There’s no major blurring, and only marginal judder, even with 1080/24p Blu-ray sources. Plus there’s none of the fizzing noise over moving skin tones you sometimes get with budget DLP projectors (though not the InFocus IN80 we keep mentioning).


Motion can also reveal LCD’s dreaded screen door effect (where the grid-like structure of the LCD panels becomes visible in the picture), but here again the HC5500 enjoys a largely clean bill of health, with neither moving edges nor really bright images – such as the shots of the tank testing facility in ”Batman Begins” – showing distracting signs of the screen door effect. Even though we were watching on a relatively large 120in screen.

Still more good news finds colours looking pleasingly rich and, for the most part, pretty natural – especially thanks to the way the projector’s processing and Full HD resolution enable it to reproduce even the subtlest of colour blends without striping.


One final impressive thing about the HC5500 is how amazingly quietly it runs. Its operational noise is rated at just 19dB by Mitsubishi, and to be honest we’re not sure it even gets that high, especially if you use the Low lamp setting. This is one budget projector that certainly won’t distract you from even the quietest of movie soundtracks.


In fact, the HC5500 doesn’t really have any really stand-out weaknesses. But it still falls short of a wholehearted TrustedReviews recommendation by a matter of degrees. In other words, while it’s good at most things, resulting in natural, always enjoyable pictures, it’s also not absolutely jaw-droppingly brilliant at anything in particular.

And so, for instance, although black levels are deep and stable by LCD standards, they’re not quite as rich as those of the InFocus IN80. Also, although the image is generally dynamic, where very bright image content has to sit right alongside very dark image content in the same frame, such as when somebody stands against a window, black levels start to look a bit crushed and flat as the dynamic iris struggles to find the best brightness level. These sort of bright/dark crush problems are far less obvious on projectors with a better native (as opposed to dynamic) contrast ratio than the HC5500.


Next, while the image is impressively clean, HD pictures don’t look quite as textured and sharp as they do on some affordable HD rivals – including the Sony HW10 we mentioned earlier. And although colours are mostly natural and engaging, they do occasionally suffer small toning issues, particularly in the appearance of a slight green pall to some skin tones during low-lit scenes.


Finally, while standard definition pictures survive the journey up to the HC5500’s Full HD resolution very well for the most part, I did spot occasional traces of combing noise around edges.


Please don’t get too deflated by this run of gentle negativity, though. For Mitsubishi clearly had to make compromises to hit the HC5500’s price point, and in fact for the most part I’d argue that it’s actually worked those compromises out very well.


The HC5500 is the best Full HD LCD projector I’ve seen for under £1,500, making it a really tantalising option to consider if you can’t quite run to the £1,500 (or more) asking price of Sony’s slightly better VPL-HW10, or you hate the rainbow effect issue with the InFocus IN80.


What’s more, if the higher-spec Mitsubishi HC6500 we’re hoping to get our hands on soon can perform significantly better than the HC5500, we could be in for a real treat. Watch this space.