It seems appropriate during a week when Metal Gear Solid 5 is taking the world by storm to point out that telling a decent story doesn’t necessarily mean flooding a game with cut-scenes. Such visual stimuli is, in fact, a luxury, and as Kindle enthusiasts will tell you, often the written word has far more impact.

That’s a stance Mister Smith & His Adventures hangs all of its hopes on. This is, for want of a better description, an interactive story detailed only with prose. In each adventure, you are given a number of options as to how you’d react in a particular situation and then, getting to the meat of the game, you’re tasked with answering a number of quiz questions, each one designed to test a particular area of your personality.

That’s a rather black and white description of what Mister Smith & His Adventures has to offer, however, and as even just a few seconds of play will detail, there’s a whole lot more colour to what’s on offer here. Namely, bags and bags of humour. 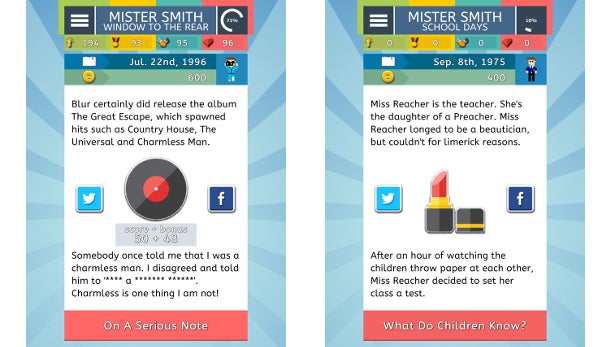 Included in play are three stories – an opening tutorial that lays out the basics of play (in a more entertaining manner than most), the story of Mister Smith’s birth and first moments on Earth, and a murder mystery (of sorts) later on in his life. All of them follow the same path, with reams and reams of text delivered by the game’s narrator – presumably developer Steven McDade – that help set the scene in the whimsical, witty style that proves to be the game’s signature. Indeed, so sharp is the text that you’ll quickly forget you do in fact have a role to play.

And that’s the role of a decision maker. Typically, after detailing your setting, the game will ask you to make a few choices that push the plot along in a particular direction. Should you jump on a skateboard to impress your other half, risking injury and humiliation, or should you attempt to juggle some balls while dancing instead in a comical fashion? More importantly than that, what should your first words be when you leave your mother’s womb? And should you try to climb straight back in there?

In truth, none of these decisions drastically change the outcome of the adventure, but they do trigger entire new blocks of text, each one full of its own quirks and eccentricities, seemingly designed for repeated play. Indeed, so ludicrous are some of the options on offer that it’s hard to resist starting the adventure again just to see what response opting for some of the more ‘alternative’ responses will trigger.

The main part of play is the game’s quiz questions, however. Tenuously linked to the adventure in question, there are four questions in each round, with 50 points awarded for a correct audience and a further 50 points or lower lumped on top depending on how quick your trigger finger is. Each of the questions is set around one of four areas – bravery, friendship, romance and intelligence – with the score combined at the end of play to deliver an end of stage total. In essence, however, none of this really matters. 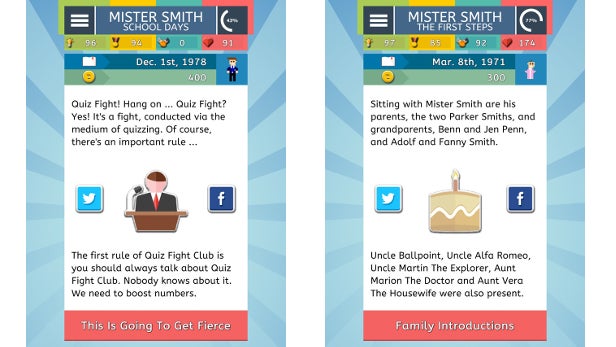 While you may want a top score to show off on Facebook (and, if that’s your goal, it’s perfectly possible to replay levels very quickly, triggering the exact same questions), this is a game where the script is everything, and your answers are mere avenues to unlocking more and more bundles of text-based fun. It’s this reliance on copy that really only makes an impact during its first read-through that’s arguably Mister Smith & His Adventures’ one weakness.

If you want to play without paying, grinding through completed levels in order to build up enough Mister Smith points is (watching video ads over and over aside) the only way to unlock further stages. What’s more, the final two levels are devoid of any stories at all, simply comprising of a pack of questions linked together by admittedly funny prose, but sadly text that’s devoid of any plot. Though no doubt writing such an adventure is time consuming, these question packs do feel like an attempt to fill the game up with content in order to meet a release schedule, even though new adventures are hinted at within the menu screens.

Of course, such frustration only exists because the adventures already contained are of such a high quality. As soon as you’ve finished one level, you want to jump straight into the next – something that is a testament to Mister Smith & His Adventures and what it already has to offer. Developer Steven McDade has unleashed something almost entirely unique on the App Store – an accolade few can boast eight years into the marketplace’s history, and one that means it’s especially easy to overlook Mister Smith & His Adventures’ few weaker moments.

This is a game of real quality, of humour and creativity in spades, using little more than the imagination of one man, tapping away on his keyboard. Now, that’s a real story.

Verdict
Boasting the kind of humour far bolder games would kill for, Mister Smith & His Adventures is part pop quiz, part comedy capers, with the combination of the two elements delivering a text-based game that leaves other glossier efforts trailing in its wake. The only real complaint is, we want more. Lots more.