Here’s the real Mirror’s Edge challenge: just play through a single level without leaning or squirming in your seat. It’s impossible. As our heroine, Faith, runs across the rooftops I find myself shifting left and right to match her movements. Every time she jumps, her view shifting with uncanny realism to the landing point a little too far below, I find myself craning forwards, my eyes staring down into the screen in some vague, unconcious belief that I’ll see a little more this way. Even though the limbs I see flailing before me are obviously those of a young, street punk woman, there’s something about the revolutionary use of first-person in Mirror’s Edge that drags you right into Faith’s position. For all its faults, DICE’s game can be one of the most exhilarating and exciting games you’ve ever played. 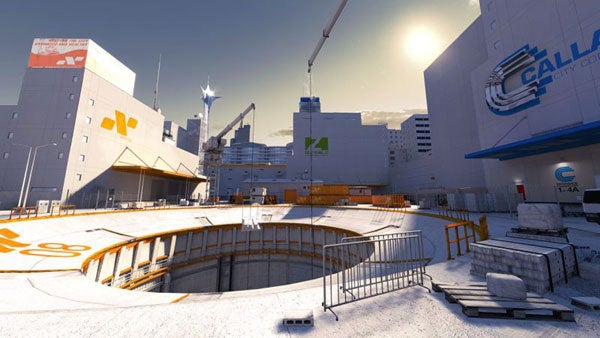 Any comparisons with existing first-person action games are misleading. Maybe you can see predecessors in Portal or the early rooftop chase of Half-Life 2, but Mirror’s Edge is really a platformer; kin of Tomb Raider and Prince of Persia, only rendered from a first-person perspective. Each level is essentially an obstacle course, with Faith – a kind of underground courier in an unnamed, near-future city – traversing from point A to point B using the sort of techniques associated with free-running, or Parkour as our French friends like to call it. Speed and momentum are all important, with you clambering up and over air-conditioning vents and rooftop generators, vaulting over barbed wire, wall-running across chasms and grabbing onto ledges by the tips of your fingers. 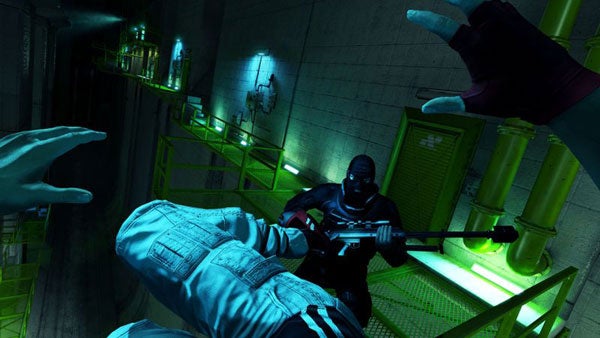 The actual gameplay is barely innovative – there’s little you haven’t seen before in Assassin’s Creed or Prince of Persia: Sands of Time – but the presentation makes it all seem new once more. The way the camera tracks Faith’s vision, showing glimpses of her arms grasping for balance or her legs pounding the concrete, is incredibly convincing. Combine this with the speed at which the game is played and it makes for an almost exhausting experience, like that great point-of-view chase sequence in the film Point Break stretched out over hours of game time. 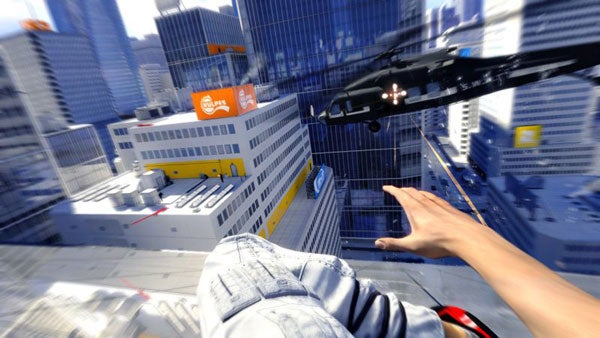 Visually, it’s a magnificent game. Where most titles powered by the Unreal 3 engine slap on layer after layer of texture detail and surface effects, Mirror’s Edge is all about stripping back the environment to a bare minimum of sun-bleached white surfaces, blinding light and a restricted palette of bright reds, blues, greens and oranges. Of these red is the most important, signifying routes Faith can take, doors she can open and items she can leap off or grab onto. The style fits the subject matter perfectly and allows the game to render complex rooftop scenes and long draw-distances at ridiculous speeds, but it also makes you focus on the task in hand: where am I going, and what am I jumping to, racing along, smashing through or desperately grabbing onto next? 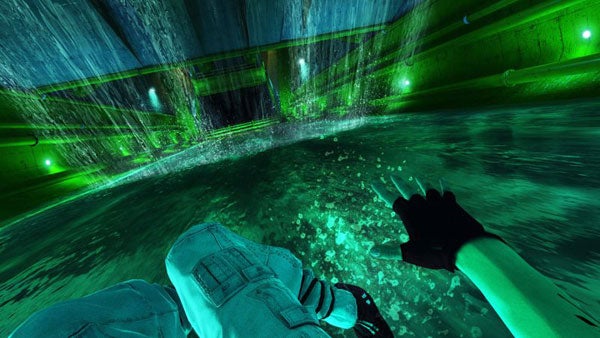 Why that sense of desperation? Because Mirror’s Edge is all about being chased. As an illegal operator embroiled in a sinister conspiracy, Faith spends most of her time on the run from heavily armed agents of the law. For long stretches of the running time the game creates an overwhelming feeling that the ‘blues’, as they’re called, are right on your footsteps, and as you race ahead of a hail of gunfire, there’s a sense that you simply can’t afford to slow down. Faith isn’t defenceless – she can ambush unaware foes or unleash a flurry of kicks and punches on them, even grab a gun and turn it on her hunters. She also has access to a Matrix-style slowmo ability, allowing her to finish a fight with minimal damage. All the same, caught in the open or outnumbered she can’t last long. Fight when you should be running, and you simply won’t survive. 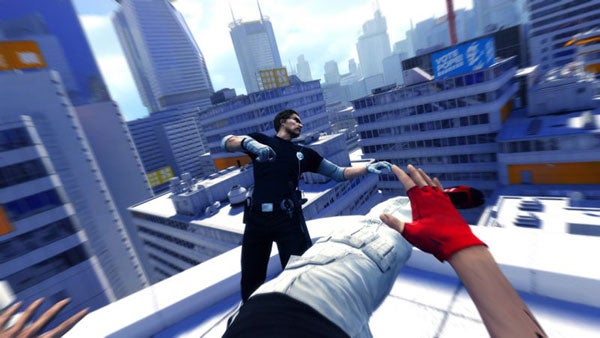 As with Sands of Time or any great platform game, the challenge is twofold. First, you have to work out your route, spying which rooftops or ledges or out-stretched bars will get you where you need to go. Secondly, you have to actually execute the necessary maneuvers. Luckily, for the most part Mirror’s Edge gets its control system right, using the left stick to steer faith and the trigger buttons to handle her different jumps, grabs and slides. It’s not quite as idiot-proof as Assassin’s Creed’s simulation of free-running – and therefore a little more satisfying – but as long as you can time your presses of the L1 and L2 buttons with some degree of skill, you’ll be fine. When Mirror’s Edge comes together in a stunning flow of rooftop acrobatics, it’s absolutely unbeatable. There are five or ten minute stretches that leave you with a feeling of breathless awe. An early escape from an office building, a breakneck chase through subway stations – these are some of the best gaming moments I’ve had this year.

Unfortunately, there are lots of occasions when it doesn’t come together, and this is what makes Mirror’s Edge such a frustrating game in just about every sense of the word. The big issue is level design. Some stretches are absolutely great. Some are irritating, dull or just confusing. Despite a built-in hint system that’s supposed to orient your vision towards your next objective, I’ve come across numerous points where it’s simply not clear where you’re meant to go or what you’re meant to do. In fact, there are points at which the hint system is actively misleading. In these situations you’re left to find the way through by trial and error, repeating the same two or three minute section over and over again until you basically luck out. 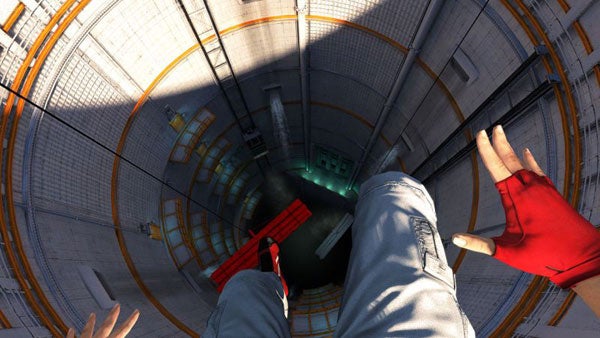 There are also sections where a particular leap or sequence of moves needs to be performed with the utmost precision, leaving you grinding your teeth as you – again – repeat and repeat ad nauseum. This isn’t merely annoying; it breaks the momentum that powers the whole game along down. It also gives you too much time to think, and what you’ll be thinking is how linear the whole thing is. The more you play, the more you realise that Faith’s route has been set in stone, and all you can do is follow it. In short, a game that promised to be extraordinary seems beset with all too ordinary flaws.


It was also a mistake to throw in sections where combat is unavoidable. While you can get by using stealth and guile to overcome multiple enemies, it’s far more tempting to simply reach for the options screen and dial the opponent difficulty down, then slap away. The combat system just isn’t up to the job, and these bits just aren’t any fun. 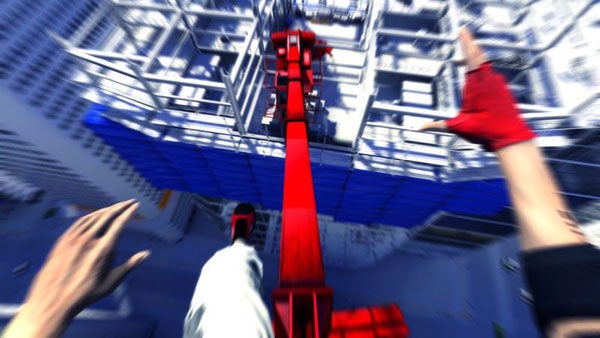 This is a real shame, because while Mirror’s Edge can be samey, its gleaming rooftops and dimly lit interiors seeming to repeat from level to level, the adrenaline-soaked, beating heart of the game is magnificent. If only it could just maintain its momentum and not constantly trip and stumble or lose its way. If only it could avoid bogging you down or making you feel that, after twenty minutes working on the same two minute chunk, you might be enjoying yourself more doing something else.


Score wise, it could have been a nine – maybe even a ten – but instead I feel horribly tempted to curse it with a six and have some small revenge. But then I play it again and remember just how thrilling this first-person platformer can be. A mildly disappointing seven it is, then, but one that’s clawing towards an eight were I feeling kind. I’d like to be, and I dearly hope DICE will come back for another crack, maybe having learned some lessons from this time around. Kudos to the studio for coming up with a new concept and a new experience, but it would be great if it was consistently enjoyable and not so frequently and damnably annoying.


An incredible first-person spin on the platform game played at breakneck speed for incredible thrills. If only it wasn’t bogged down by so much thoughtless or directionless level design.