What is the Mio MiVue Drive 65 LM?

The Mio MiVue Drive 65 LM is a combined sat-nav and dash cam. If you plan to have both devices in your car, your windscreen can become a little cluttered. In addition, you may have only one power connection in your car, making hooking up both sorts of device at the same time problematic. The MiVue Drive 65 LM offers up both, with a 6-inch screen and Super HD camera making up the package.

The MiVue Drive 65 LM may reduce the windscreen clutter by one device, but it will still take up a fair bit of space. The screen has a 6.2-inch diagonal, but there’s a sizeable bezel around it, particularly on the left and right and at the bottom. Unlike most sat-navs, it’s also designed to hang down from the top of the windscreen, rather than sit towards the bottom. As a result, positioning is a little problematic, since you also need to make sure the camera has a good view of the road ahead. 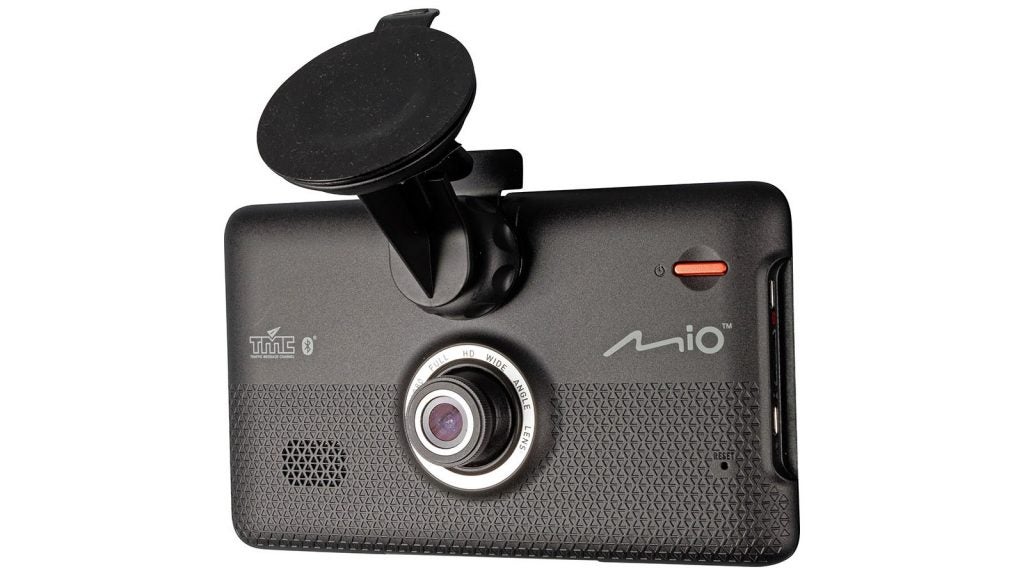 The mount itself is a standard suction device, into which the sat-nav slides firmly. There’s no quick-release here; and since it isn’t recommended that you leave a sat-nav in your car, you’ll probably have to remove the MiVue Drive 65 LM along with its mount every time you leave the car unattended, which isn’t ideal.

Power comes from a reasonably long cable, with a captured car adapter at one end and mini-USB at the other. This doesn’t mean you can use a USB power connection in your car, or multi-USB adapter. But the power cable includes the circuitry for the TMC traffic receiver, of which more later, so you can’t do without it if you want the traffic updates.

The camera sits on a rotating mount on the back of the satnav, so you can point it in the desired direction. Mio doesn’t state the size of the camera’s sensor, but this is more than just an afterthought, offering a Super HD resolution of 2304 x 1296 at 30 frames per second. 1080p at 30 frames per second is also available; it’s the default. 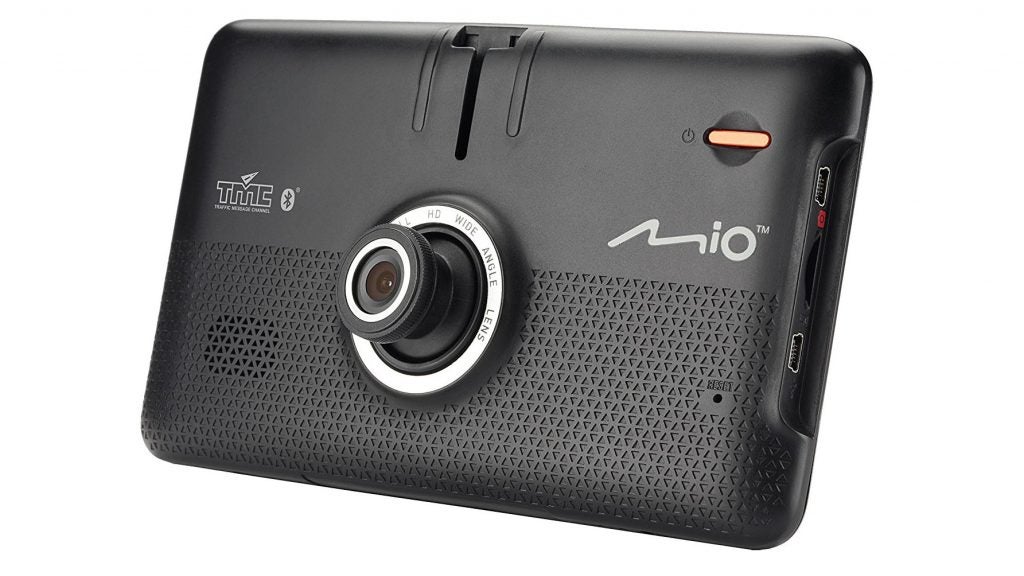 Mio includes a 16GB microSD card in the box, which slips into a slot at the top of the unit. There’s a second microSD card slot on the side for adding extra maps. When using Super HD resolution, footage is capture at around 16Mb/sec, so the 16GB card supplied will be enough for 135 minutes of footage before looping occurs. This is where the oldest files are overwritten with new ones, so you never run out of space. Files are split into fixed lengths (three minutes by default) to aid this process.

When you first fire up the MiVue Drive 65 LM, you need to input a code from the box to activate it, which is a little annoying if you’ve left that in the house. The menu presented is the standard one that Mio/Navman have been using for a while, with large colourful icons to take you to the main functions. The only addition here is that it now includes an icon for the camera. 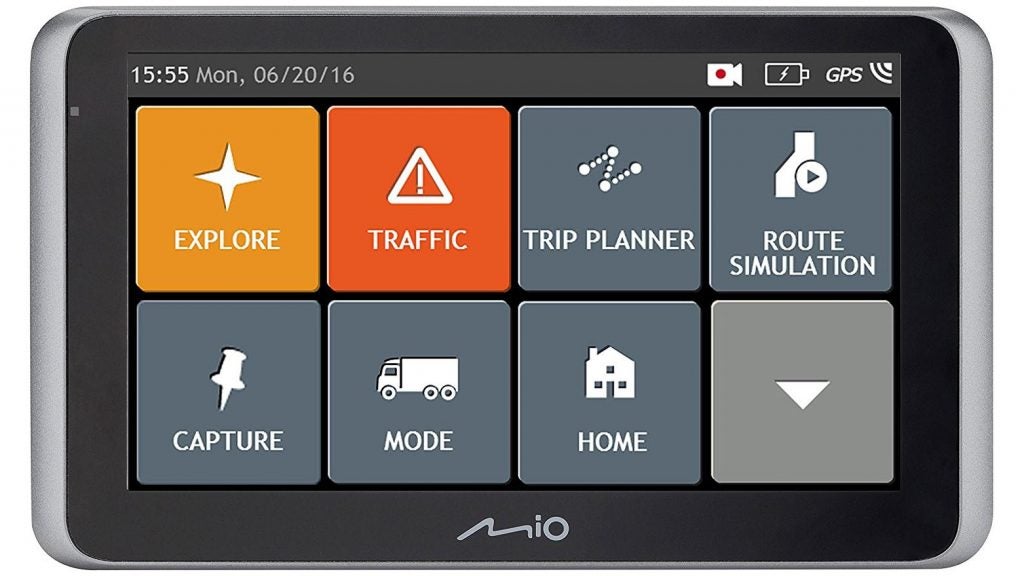 To locate a destination, Mio still splits up all the available options into separate sub-menus, so you can either search by keyword, use the traditional address method, input a postcode, a road intersection, coordinates, browse points of interest or a list of recent locations. When you choose a destination, you’re presented with multiple routing options including the fastest, most economical, easiest and shortest routes. Most sat-navs provide these options but they’re found deep in the settings. Mio provides icons on the screen with the routes shown on the map.

The MiVue Drive 65 LM comes with maps of 44 European countries pre-installed, and like TomTom and Garmin, Mio provides free updates for the maps for the lifetime of the product. Safety camera locations are, likewise, provided with free lifetime updates. There’s built-in TMC traffic, too. This is no match for Garmin’s Digital alternative or (particularly) TomTom’s traffic service, but it will keep you out of the main motorway jams, so it’s a useful addition.

The navigation instructions present the usual 3D map. Your route is shown in green on a grey map. Your current road position is indicated at the bottom, with the next turning more prominently presented along the top. By default, the distance to your destination is shown in the top-right corner. Click on this to reveal the time to destination, current speed, estimated time of arrival and current time, which then take up the right-hand edge of the display.

Via the camera icon, you can change the resolution, as well as toggle sound recording and wide dynamic range. The exposure can be adjusted from -1 to +1 EV in nine steps. The G-Sensor sensitivity can be adjusted and you can choose what information is stamped on the video. There’s also access to the Driving Assistance features, of which more later.

A second mini-USB connection can be found on the left of the device; it’s actually meant for hooking up an optional rear-view camera on the side of the device. There wasn’t any information available from Mio about how much this optional extra would cost or its specification, and there’s no mention of it in the camera menu either.

Although the video quality of the MiVue Drive 65 LM’s built-in dash cam isn’t up with the best models currently on the market, it’s certainly decent enough. Colours aren’t completely faithful, and there are signs of compression in some areas, particularly with fast motion. However, it’s possible to read text at a reasonable distance and make out the details needed for identification. You just wouldn’t want to present your holiday drive around the Alps at this quality.

You can view some sample footage shot with the Mio MiVue Drive 65 LM here.

The MiVue Drive 65 LM has some additional dash cam safety features. To access these, you’ll need to calibrate the camera direction so that a red line is along the horizon and a green line in the lane centre, then a blue line can be moved up and down so that it marks the end of the bonnet. Then you can turn on the Lane Departure Warning System and Forward Collision Warning System. The former lets you know when you drift out of lane on a motorway, and the latter warns you if you’re coming up too fast on the car in front – both useful features, if not infallible.

Should I buy the Mio MiVue Drive 65 LM?

The Mio MiVue Drive 65 LM is a solid, feature-rich device. It packs in almost everything you might want from a sat-nav or dash cam, and at £260 it’s a bit of a bargain.

This isn’t the perfect package, however – the sheer size might make it rather a distraction on your windscreen, and you’ll need to take it out of an unattended car, which Mio hasn’t made particularly easy. But it’s a capable performer, and you do get plenty for your money.

The Mio MiVue Drive 65 LM packs a decent dash cam and capable sat-nav in one for an attractive price, although it’s a huge device.