In the world of tech, if you want your gadgets and gizmos to get attention, in most cases, they need to either be very large or very small. Mio’s latest GPS device falls firmly into the latter category. The dinky H610 measures a mere 87m high, 60mm and 22mm deep. If like me, reading measurements doesn’t help at all, you’ll get a clearer idea when I say that it’s about the size of a short squat mobile phone and only a little heavier at 166g. 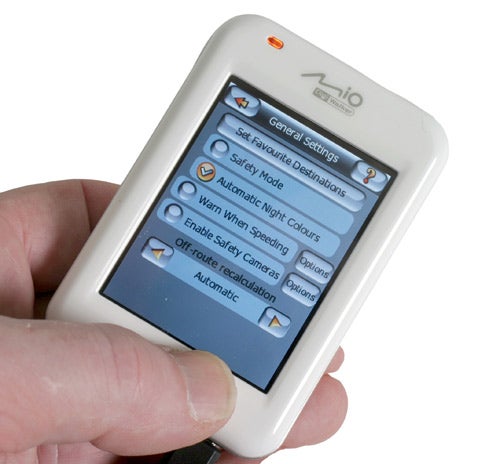 The design of the device is simple. It sports a 2.7in touch screen offering 65,000 colours and has no buttons save for a power switch at the top and a menu button on the left. There’s also a slot for SD cards, a recessed reset button and a hold switch. At the base there’s a headphone socket and a mini USB connector. There’s also a hook should you wish to wear it round your neck via the supplied lanyard. The battery is a non removable 1,300mAh Lithium Ion unit offering a claimed 4.5 hours of use with GPS active. Use the additional functions and you’ll need to charge this everyday.


With its compact size, rounded edges, and replaceable faceplate, Mio is, rather patronisingly I feel, marketing the H610 as ‘GPS for girls’. An awful alternative faceplate with flowers all over it is included in the box. While it’s true that women will find the H610 a convenient size to pop into a handbag I’m sure that it will be equally appealing for guys to keep in their pocket or bag, when out and about. 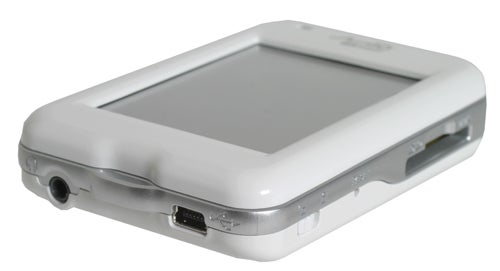 It’s actually quite impressive that such a small device has full detailed maps for the UK and most of 23 other countries in Europe. It can do this thanks to the 2GB of integrated flash ROM and 64MB of RAM. By default the maps and software only take up just over 1GB, and when I hooked it up to my PC after installing the software it reported 918MB free for use. However, I wouldn’t recommend transferring anything major across to the device via cable as it only has a bizarrely backwards USB 1.1 connection. Thankfully, there’s the aforementioned SD card slot for further expansion.


The reason for needing this extra storage is that naturally, GPS isn’t the only trick the H610 is capable of. It can also play MP3s, shows videos and pictures, store your contacts and even has some built-in games. 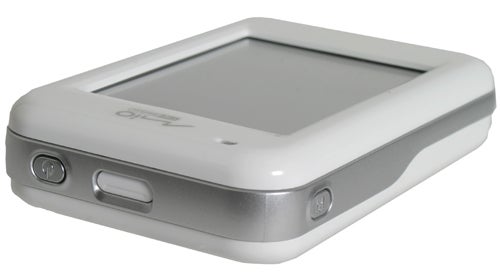 Before we delve into all of these lets start with the core function – GPS. The H610 runs MioMap version 3, which I’ve previously used on devices such as the Mio P550 and C710 and once again I’m bemused by the simply odd interface. It defies any kind of logic with no consistency as to button locations or what you need to press to get about. With repeated use I’ve got used to it, but it’s never going to win any awards for intuitiveness. In its favour the software is fast, which overall makes it less painful to use than the painfully sluggish Road Angel Navigator 6000.

The software comes with a one year’s subscription to a built-in speed camera database and this has to be manually activated first to get it going. This is because you have to acknowledge the frankly hilarious user agreement that states that use of the database does not permit the driver to exceed the speed limit, implying that some people might actually think that knowing where the cameras are means that the rules don’t apply to you. Equally amusing is this fantastic page on the Mio web site that lists the available Speedcams in the Mio database. It seems that Andorra is the proud possessor of a whole two speed cameras! Imagine driving round the whole country and getting caught by one of those cameras – you’d feel like such a chump. What’s great to see is that that with 8657 cameras, the UK has more than double that of Germany, despite being a country one third the size. We truly are the Stars of CCTV. Big brother state, anyone? Anyway, I digress. 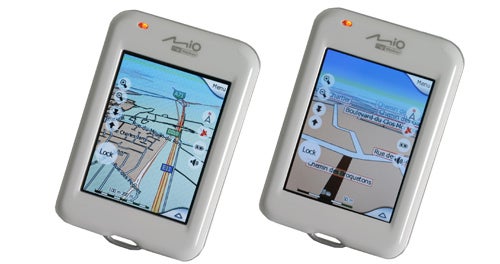 The MioMap 3 software then, is a mess to use, but it is powerful and speedy. The H610 makes uses of a SirfStar III chipset and performance was as expected, good, picking up a signal in a few minutes the first time, and quicker after that. There’s a connector for an external aerial at the back should you need it.


When driving the main map screen is overloaded with icons but a bigger problem is that the 2.7in screen is really too small to be practical in the car. I had it in the supplied cradle near my own TomTom Go 510 and it looked rather puny. I literally had to lean forward and squint to see the details, which can’t be safe. It does have reasonable volume level though so you can rely on the voice of ‘Thomas’ to guide you.


When you come out of the MioMap software you find yourself at the menu screen, which contains the rest of the functions. The Mioplayer handles MP3’s , videos and photos. Only MP3 support is listed, which seems odd when the MioMap software uses Ogg for its audio. In typical Mio fashion the MP3 player interface is awful and it doesn’t read ID3 tags, meaning you’re music is played in alphabetical order, which is rubbish. It’s also got a set of indecipherable icons to deal with, which is a shame as sound quality is superb. I played some tracks that I also had on my iPod and they sounded a lot better on the Mio. 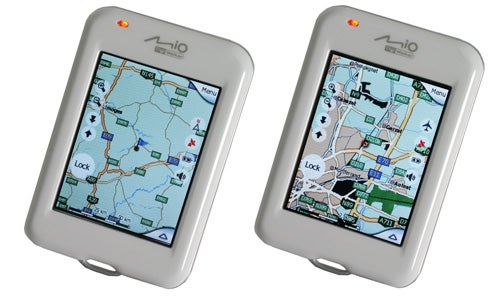 The Video format is MP4, which means that you’ll have to convert most files. The good news is that some custom Ulead software is bundled which is easy to use. I tried it with a couple of downloaded files but unfortunately was left with no audio. However, I feel the screen is too small to make for a decent video watching experience anyway.

JPEG images looked fine on the device, but larger files inevitably took a long time to scroll through and the unintuitive interface didn’t help. Contacts from Outlook copied quickly across to the device using the Mio Transfer software but it didn’t have the option to navigate from addresses. 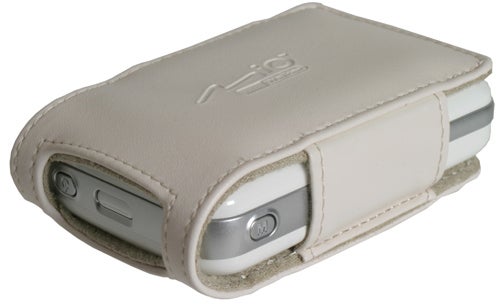 Walkers will like the virtual compass, which thanks to the shape of the H610 is easy to use and feels like an actual compass in the hands. The WorldMate application has a number of interesting applications – such as a Clock with an alarm, and the ability to show four world times at once. The Currency converter could be very useful, as could the list of country dialling codes. Other tools include a measurements converter and a calculator.


Finally, there are also four games included, which are quite fun to play. My favourite was the Wipeout-a-like Flux, guiding your ship through tunnels with the on screen controls – remember no buttons. Ok, it’s no DS Lite, but if you’re stuck on a plane/train/automobile it’s something to occupy you. 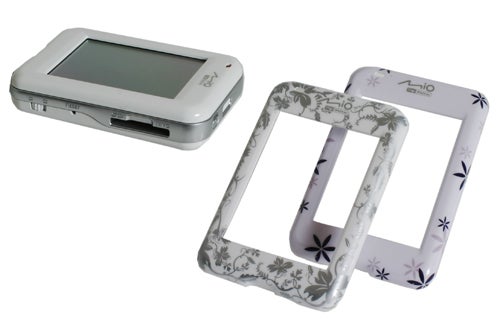 All-in-all the additional features on the H610 actually impressed me by increasing the usefulness of the product. MP3 playback on a larger GPS device designed for car use doesn’t make much sense to me, but on a small pocketable device such as this it has a place. The other tools and games are in the main worthwhile too.


As far as its main function goes, as a portable GPS device the H610 has a lot going for it. It’s small enough that you can leave it in a pocket or bag and use it to get around a city – and in any one of 24 countries, which is fantastic, making it the ideal holiday tool. The screen is a bit too small for regular car use, but it is possible. If you’re planning a brief road trip in Europe it could still do the job. After all it won’t take up much space in your luggage. 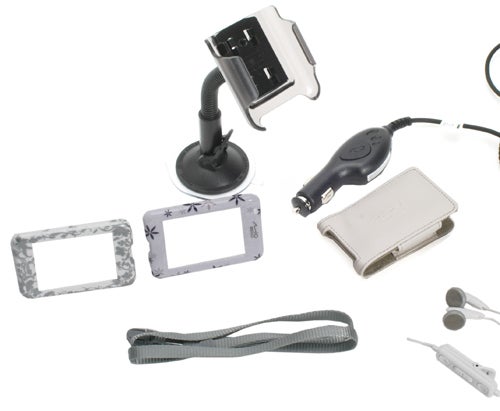 That said, I feel that the H610 is a little on the expensive side, even at the cheapest I could find it – you can pick up a European map equipped TomTom Go 710 for similar money. Of course, I can’t help but feel that if it was running TomTom software then this would improve the product considerably, but even as it stands the H610 is a cute, fun portable GPS that does what it sets out to do.


Until the time that we all have GPS in our phones, the H610 is a great portable navigation gadget. It’s highly portable, small, light and actually quite fun. And it’s not just for girls.