Mio has taken the convergence mantra to heart with its higher end sat-nav systems over the past year. On top of mapping hardware and software the more expensive devices in its range have sported photo viewers, the ability to play MP3 files and can act as Bluetooth speaker phones.


But in truth, though such extras look nice on a features list, in my experience they’re very rarely used. You’ll still take a music player with you for MP3 playback and a proper camera for taking and viewing your holiday snaps – even if your sat-nav will do this for you. 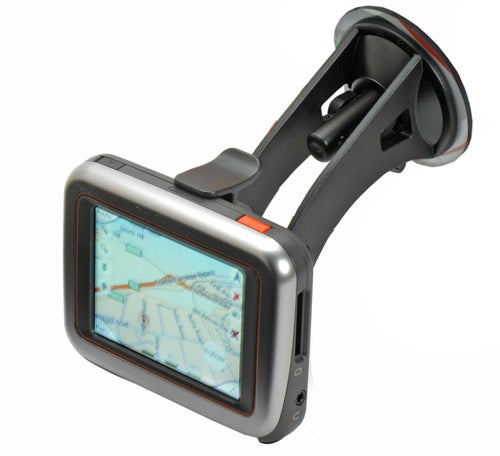 At the end of the day, the success or failure of a sat-nav device ultimately comes down to its accuracy, usability and practicality, not technological bling – a test that Mio’s top of the range C520t fell foul of. Can its ‘low-end’ C220 remedy the situation?


It certainly isn’t laden with as many features as its big brother. It doesn’t have a widescreen and its 3.5in screen isn’t the largest around either. But small doesn’t always mean bad when it comes to portable sat-navs. For instance, drivers of superminis, without acres of windscreen to mount the latest widescreen monster on, will probably agree that the smaller the device is the better. 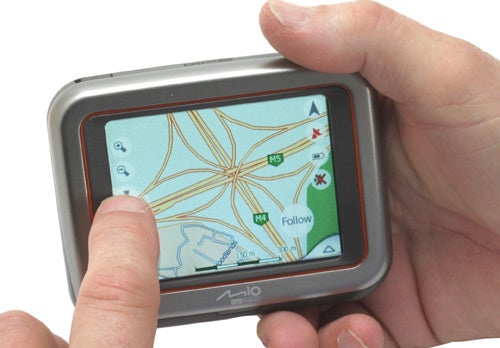 The smaller dimensions also allow for much more flexible positioning in your car. Instead of having to place it below the eyeline, a smaller sat-nav can sit quite comfortably higher up the screen without impinging on your field of view – no more squinting to see it or stretching to reach the thing when you need to make adjustments to your route. And, of course, smaller sat-navs are easier to carry around in your pocket.

The C220 doesn’t come with the luxury of TMC as standard either – a system that uses the FM radio frequency to receive traffic warnings. But considering how rarely the system in this country provides accurate and timely information, that’s no great loss. There’s no MP3 player, Bluetooth or photo viewer, but I doubt you’ll miss these features.

Without the burden of unnecessary features, this little sat-nav gets on with the job of navigation very well. As with other Mio systems, the C220 is based on Tele Atlas maps and these do an extremely good job of getting you where you want to go. You can’t change the person uttering the voice instructions, but Thomas’ clipped English tones are clear and helpful in most situations.

Routes are calculated swiftly and automatically when you stray off-route, and the on-screen next-turn information works well too: an icon representing the next junction is permanently displayed at the top left of the screen, and roundabouts are shown, usefully, with a number in the centre indicating which exit you need to take. Below this there’s a customisable panel displaying route information such as ETA, distance to the next junction and so on, plus a button for entering the main route menu.

In the box the C220 includes full street level maps for the whole of the UK. There’s also a speed camera database included with a free, one year subscription to updates. You can also have the C220 warn you if you’re speeding – handy if you’re one ticket away from a ban. And if you insist on ignoring those warnings, you can even run the C220 in ‘pedestrian’ mode. This sets the device to ignore one way systems, no turn right signs and the like. 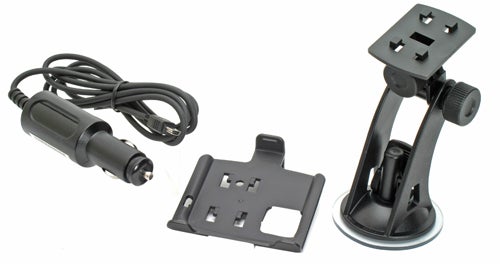 In fact apart from a few enhancements – such as a ‘predictive’ keyboard that disables certain keys as you type your address in (making frustrating typos less likely), and an improvement in stability – this is largely the same software that powered the previous range of models.


That means, as well as the positives listed above, it still suffers from most of the same problems. The biggest issue is that Mio has tried to squeeze too much onto the C220’s diminutive screen. In addition to the side panel, which cannot be hidden away to free up space, the map is cluttered with icons for zooming and panning the view and accessing the satellite information screen. Most of these are unnecessary and not all of them can be turned off.

The C220 has the same rather clumsy POI management its predecessors had. Instead of one screen for looking up petrol stations, parks and local landmarks, there are two: if you want to display them on the map you have to use the Manage POI screen; if you want to simply look them up for routing purposes you have to use the Find POI screen. Using either method requires several button presses too, so it’s not a tool you’ll want to use while on the move.

Address entry is still confusing. You have to enter the town you want first before you can use the post code or address search. And, last but by no means least, there are no external controls. All you get is an on/off button and no quick way of adjusting the volume using the on-screen controls. 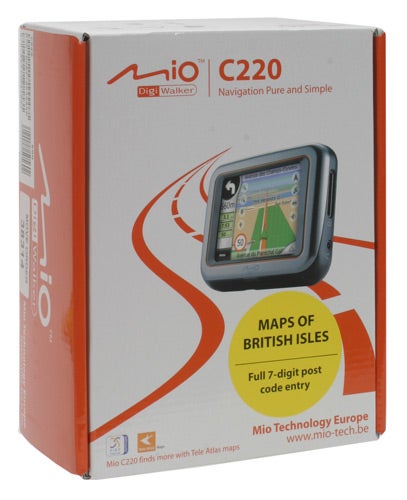 But despite its quirkiness and peculiarities – and the irritating lack of external controls – the Mio C220 is a capable, no-nonsense portable navigation device and one that is reasonably priced as well, though you do have to pay extra for European maps.


It may be a little confusing to use in places, but the C220’s weaknesses are easy to get used to over time. Most importantly, both mapping and route-finding are strong points – this is one navigation device that does exactly what it says on the tin.