Belgian company Mio has quietly been producing competent navigation products for a few years now. It still hasn’t managed to crack TomTom’s grip on the top-end of the market, but in the mid-range and low-end it’s got things sewn up, at least from a value-for-money point of view.


Its latest device, the A501 GPS smartphone, looks like an attempt to consolidate that, adding to a range that includes pocket GPS devices aimed at walking and cycling as well as those targeted at car drivers. In a world where all sorts of gizmos are adding GPS hardware and navigation software, it still represents a bit of an unusual move, though. Up to this point, we haven’t seen the likes of TomTom or Garmin do anything other than a sat-nav with bells and whistles. With the A501, however, we have a sat-nav company venturing into the highly competitive world of smartphones. 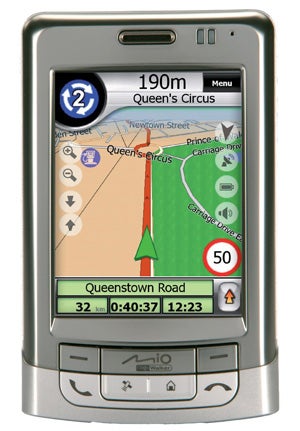 It’s probably not that much of a stretch for Mio to do this. After all, on most of its other sat-nav products, the MioMap satellite navigation products run on the Windows Mobile 5 Core platform anyway. So with the A501, instead of Core, you get full blown Windows Mobile 5 with all the software bits and pieces that entails. However, it’s a shame that Mio couldn’t run to version 6, as this older version is beginning to look dated now.


On top of the standard install there are a few extras. First is Mio’s proprietary launcher software, which gives quick and configurable, thumb or finger-based access to common functions – such as the MioMap software. This is handy, but sooner or later you’ll have to resort to using the stylus because the screen’s simply too small to let you access the tiny buttons so commonplace elsewhere in Microsoft’s fiddly operating system. There’s also an emergency location utility that will send a message and your position via SMS to your chosen number(s), and MioCalc – a calculator application that includes unit and currency conversion tools.

The hardware isn’t much to write home about, however. This is a quad band phone with GPRS and EDGE but disappointingly there’s no 3G. You get a SiRFStarIII GPS receiver for navigation and Bluetooth, but no Wi-Fi. Physically it’s disappointing too. It is relatively compact for a smartphone at 60 x 95 x 21mm, which is good, but its plasticky exterior finish makes it feel rather cheap and doesn’t look as if it would resist scratches and abrasions too well. Fortunately, you do get a decent case that’ll protect the screen when you put it away in your bag or pocket.


Otherwise, it’s standard PDA/smartphone fare. Below the 320 x 420 resolution screen is the usual panel of navigation buttons: two soft buttons, plus pick up and hang up buttons lie on the outside of the panel. In the middle are three shortcut keys: one for the launcher software, another for direct access to the MioMap software and the remaining ‘home’ button returns you to the phone’s Today screen. The latter is actually a duplication of what the hang-up button normally does, but at least with Windows Mobile you can customise the key and give it a more useful function. Slightly irritatingly, there’s no key to activate the Start menu, though. 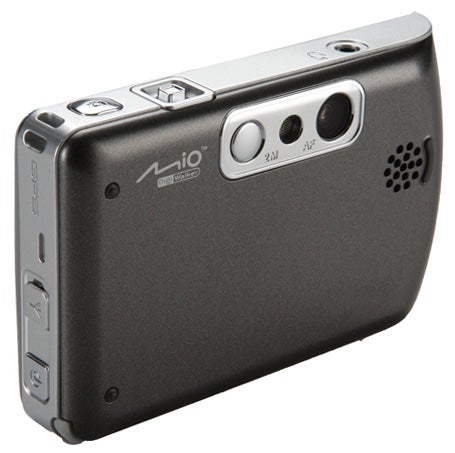 Around the edges of the A501 you’ll find a clickable joystick, a shutter release for the onboard two megapixel camera (usefully equipped with a flash and self portrait mirror), a socket for attaching an external GPS aerial, a volume rocker, mini-USB input for charging and synchronisation purposes, and a slot for SD or MMC memory cards, though this is occupied with a 1GB card for the maps and MioMap software. The stylus stows away in the top right hand corner.


The navigation side of things, as I’ve pointed out before in reviews of Mio navigation devices, is excellent. Mio’s maps are very easy to read, the audio instructions are clear and all the functions you’d expect from a mid-range sat-nav system are present and correct, including compatibility with external TMC traffic information aerials. The software is organised in a rather strange way, which can make finding your way around confusing at first, but it’s easy to get used to over time.

A bigger problem is the GPS hardware, which doesn’t appear to be up to the job. The first sign of this is that navigating around the MioMap software isn’t particularly snappy. Route calculation is swift, as it is with all the Mio products I’ve seen, but moving from screen to screen isn’t and often you’re waiting for a second or two for the next screen to appear. It’s particularly irritating when entering address details.


The second sign of trouble is that when the A501 has to recalculate a route – because you’ve gone the wrong way or driven through a tunnel – it sometimes takes several attempts to finally re-establish a route. And getting a lock on a satellite signal from cold can also take a minute or two. 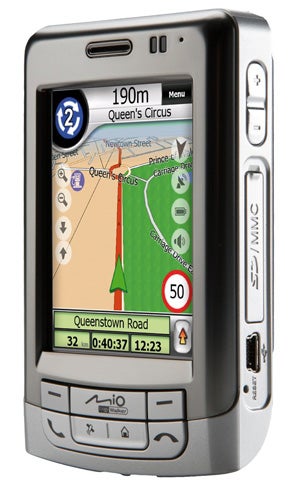 You could probably live with this but for the phone’s screen, which is reflective and becomes difficult to see on a bright day, even with the brightness turned right up. Furthermore, it’s just 2.7in in size which also means that some of the smaller buttons in the navigation software are very hard to press accurately. Fortunately, address entry isn’t too fiddly as the MioMap software gives you the option to use larger keys when typing in details.


Finally, the volume control method isn’t particularly elegant either – a couple of tabs on the windscreen mount cradle in turn activate the buttons on the side of the phone when pushed. It works, but you have to push the tabs in a certain way to get them to work properly.


Mio’s A501 is a reasonable stab at melding both smartphone and sat-nav. It has a touch-screen, which mobile phones with sat-nav bolted on generally don’t, and it’s also smaller than most PDA phones with GPS. If you truly don’t want to be bogged down with yet another gizmo when popping out and about, it’s worth considering for these features alone – especially as the driving guidance is so good.


Overall, though, there are just too many other flaws for a wholehearted recommendation. The screen’s too reflective, the software slightly laggy and the phone itself isn’t the prettiest or the most fully featured. And if that lot doesn’t put you off maybe the £334 price tag will.


Take one technological gizmo into the car? Not me – I’m sticking with two.