A little basic for the home you live in, particularly as the motion sensor isn't pet friendly, the Minut Smart Home Alarm comes into its own for holiday let, rental and Airbnb properties. As well as acting as a traditional alarm system, the unobtrusive Minut can also monitor the environment, noise levels and listen out for other alarms, giving you peace of mind whether people are in your property or not.

Smart security systems make a great deal of sense, but what about in a home that you rent out or regularly have guests in? That’s where the Minut Smart Home Alarm comes in.

This is an all-in-one security system and noise monitoring system, the Minut is designed to seamlessly blend into a home, so you have security and monitoring when you need it but you keep the privacy for guests.

Exceptionally simple to set up and clever in its operation, this is a great add-on for a rental home or Airbnb but doesn’t work so well for the home you live in.

The hockey-puck sized Minut Smart Home Alarm (45 x 85 x 85mm) looks and feels just like any other smoke alarm in your home. Looking at it, you’d have no idea that this is a smart home alarm system, and that’s just the way that it should be. For privacy, there’s no camera on this device, noise detection doesn’t require audio to be recorded, and all of the processing takes place in-device.

Before you can use the Minu Smart Home Alarm, it needs to be charged via the USB-C port on the side of the device. A full charge should last around six months, after which you’ll need to charge the device again.

To make this easier, the Minut Smart Home Alarm magnetically connects to the mounting plate, which has a sticky mount to attach to a ceiling, with Minut recommending installation in a hallway. It only takes a couple of minutes to get the alarm in place, and you can remove it just as easily, turning the alarm upside down if you want to turn it off. 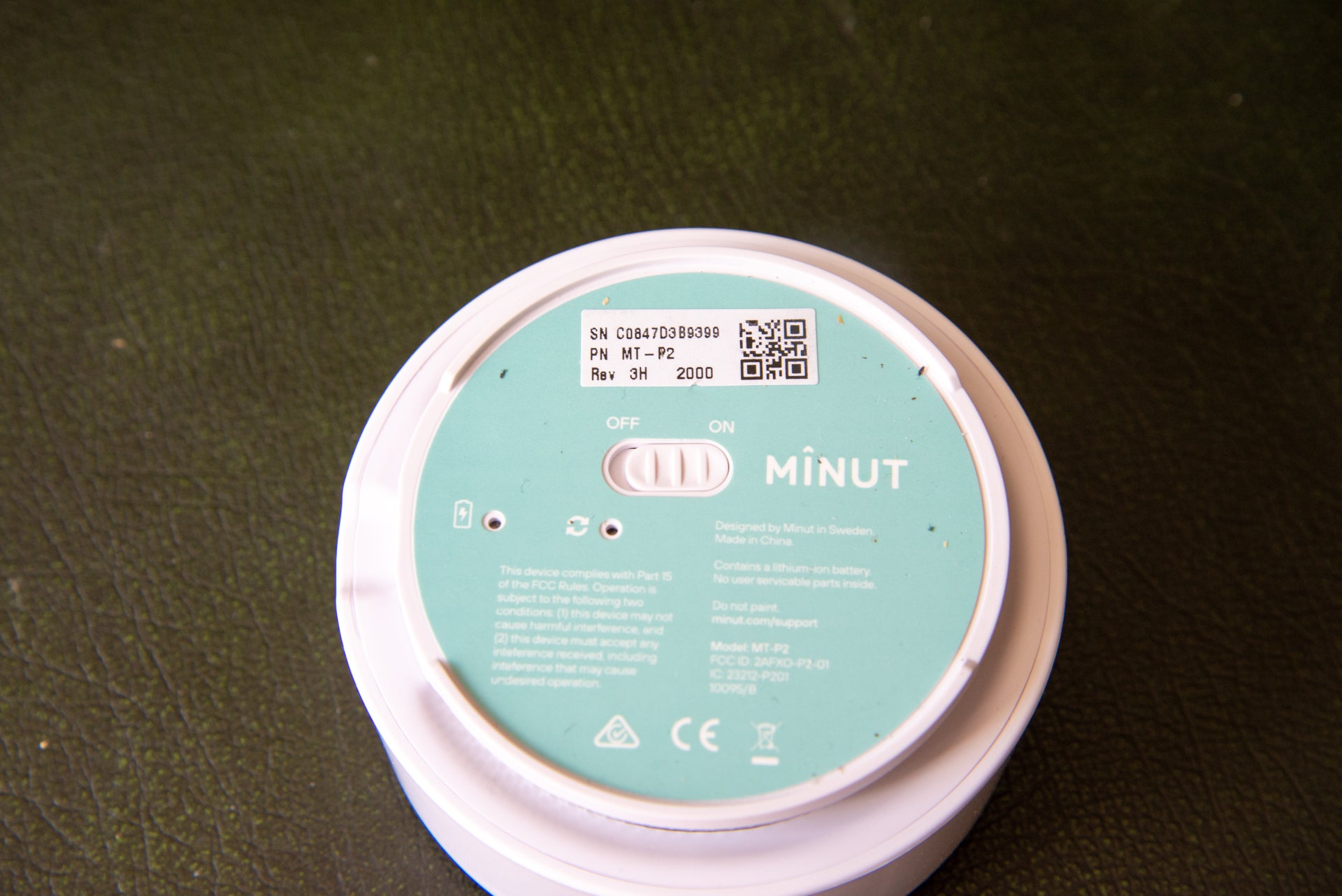 There is Bluetooth and 2.4GHz Wi-Fi built-in, which makes connecting the Minut to your home network really easy using the app. In fact, mine only took a few minutes to get connected. You can run multiple Minuts, either in the same home or, if you upgrade to the Standard account (£6.99 a month) different locations.

At its most basic, the Minut Smart Home Alarm is a device that you can simply arm and disarm from the app. There are two arm options. First, you can turn the Security alarm on, which activates the PIR motion detector; secondly, you can turn on Noise monitoring, which alerts you when there’s sustained noise for a prolonged period (the default is noise above 75dB for 10 minutes or more). 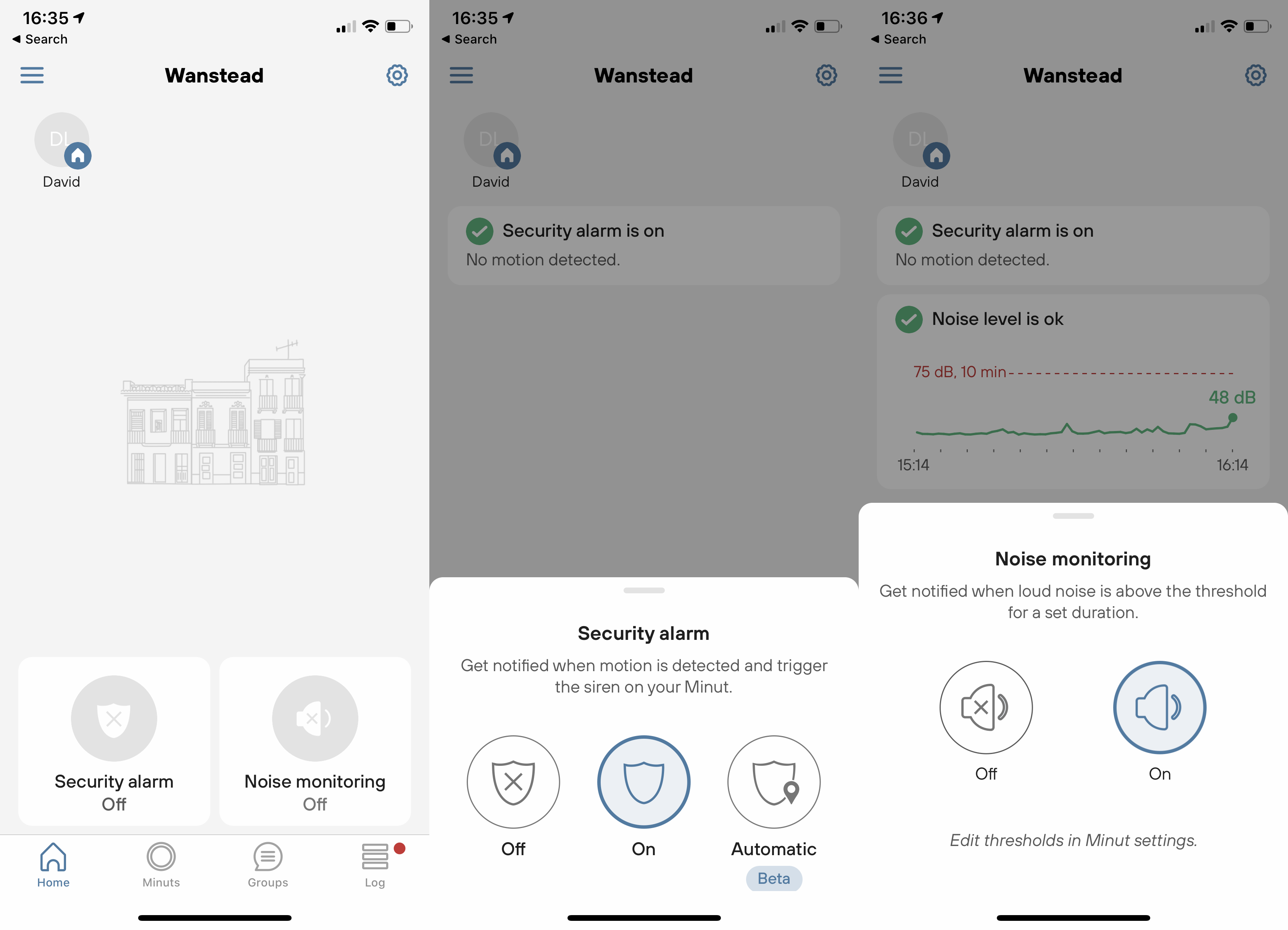 A new feature, currently in beta, will let the Minut arm and disarm automatically based on the location of yours and your family’s phones. And, you can arm and disarm the system using the Amazon Alexa or Google Assistant Skills, provided you set a PIN in the app.

In this mode, the alarm works as expected. Walk underneath the motion sensor and it will trip the countdown, with constant beep and message sent to your phone, giving you the opportunity to turn it off or notify a friend. When the alarm does sound, it’s piercing and annoying enough to call attention to it. 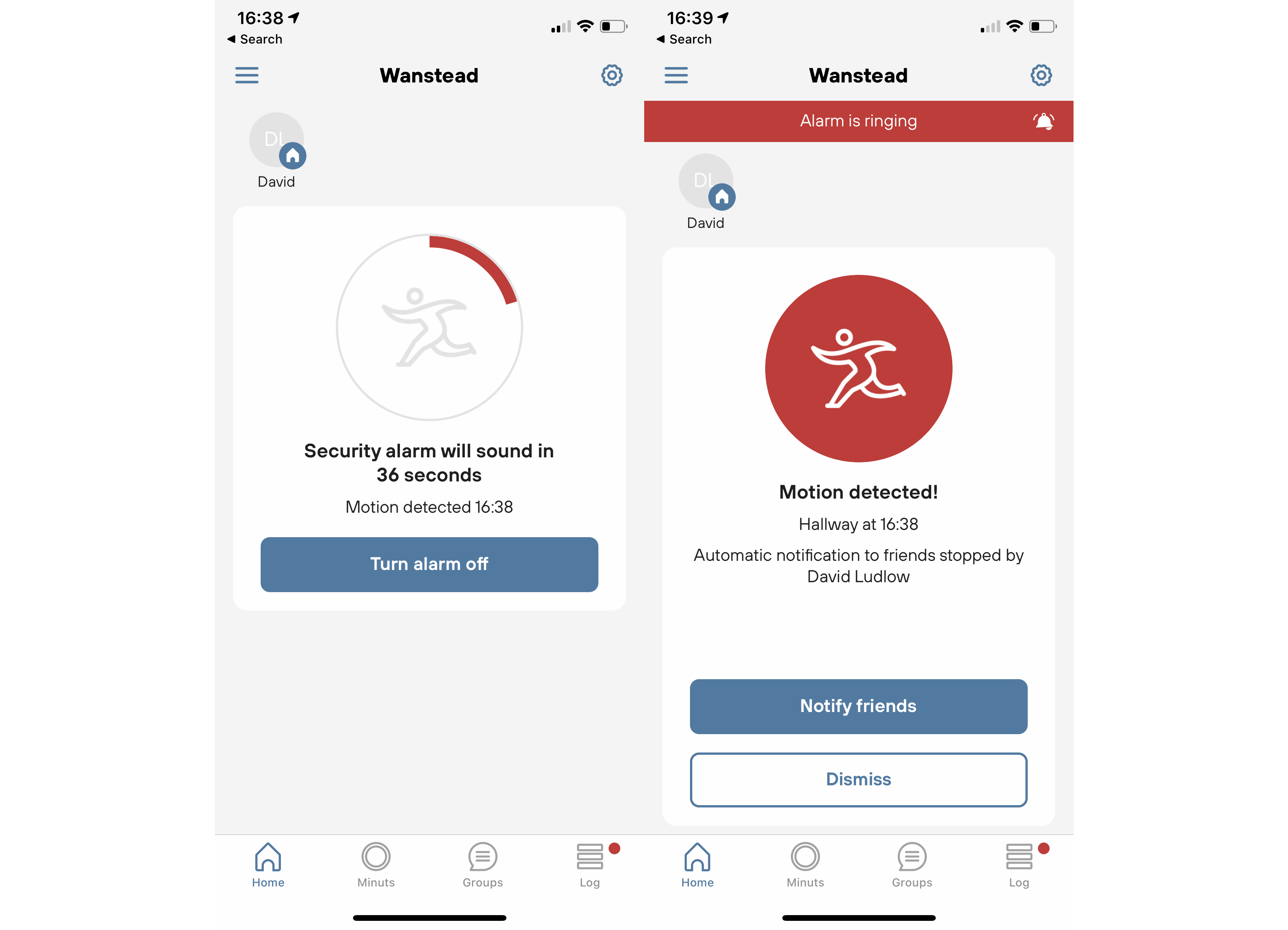 So far so good, but the motion sensor isn’t pet friendly, so if you’ve got animals, you wouldn’t want to use this alarm in your own home. Again, this is another reason why the Minut Smart Home Alarm is best suited for rental properties and holiday homes.

If Noise goes above the set level for more than the threshold time, you’re sent a notification warning you that the people in the house are being loud.

Dive into the settings and the Minut Smart Home Alarm is hugely configurable, giving you some clever features that make the system more tolerant of people going into your home and more helpful.

For example, you can set the alarm to flash and play a sound when noise levels are too loud, in order to get your guests to stay quiet. That’s handy in a flat where noise levels from guests can be a big issue. If you upgrade to Pro (a hefty £13.99 a month), you can also have SMS messages sent to your guests automatically if they’re being too loud.

You can also turn on a silent alarm, which sends you a notification when the motion sensor is triggered but doesn’t trigger the internal siren. That’s really handy in a holiday home, where you may forget to disarm the alarm when guests stay. 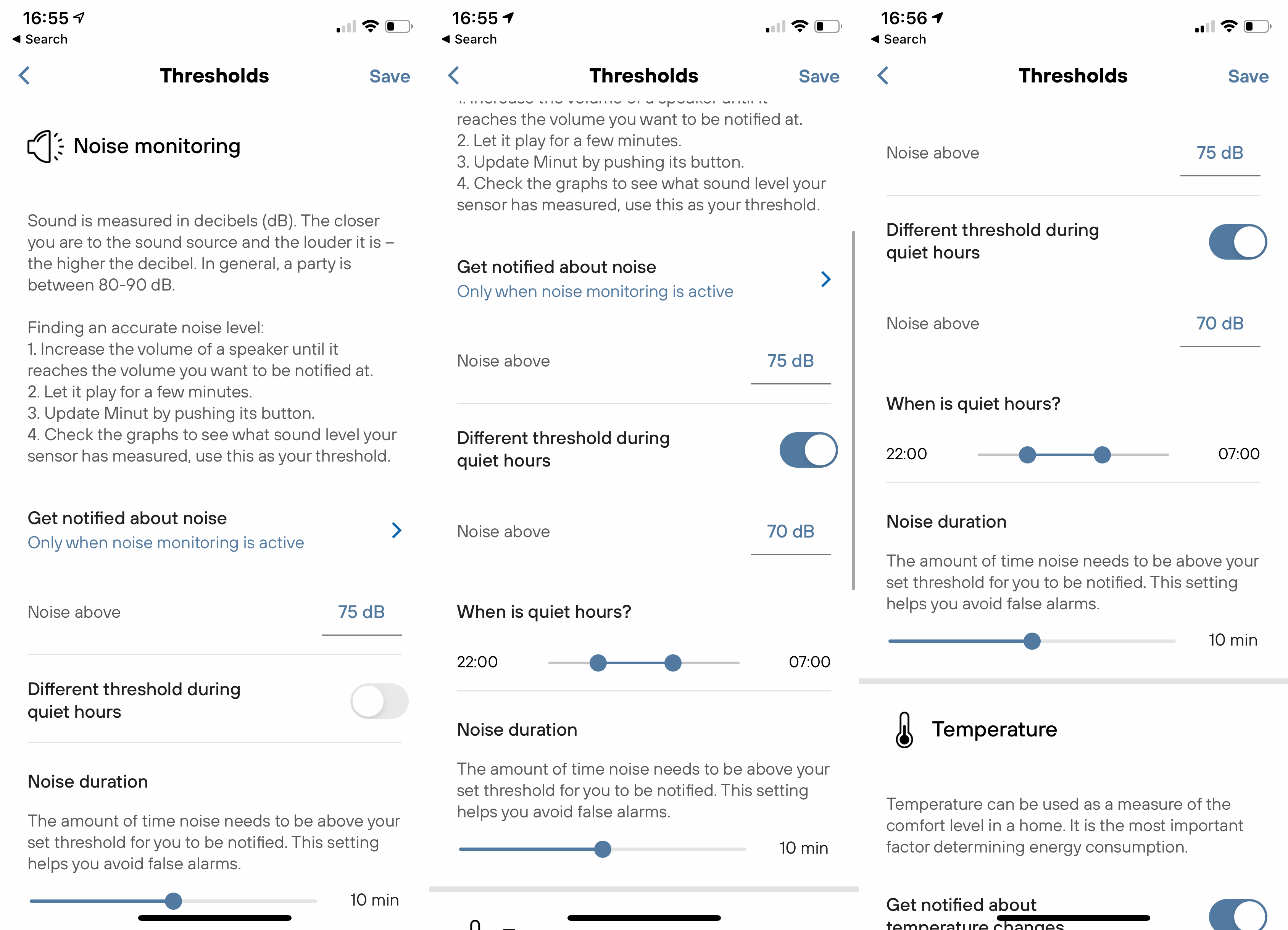 Minut isn’t just about security, as the system can also monitor your home. Minut can monitor temperature, and humidity, giving you a warning when there’s risk of mould. And, you can set high and low thresholds for both readings, giving you warnings when there are a problems, such as the house being too cold, which could signal that there’s something wrong with the boiler. 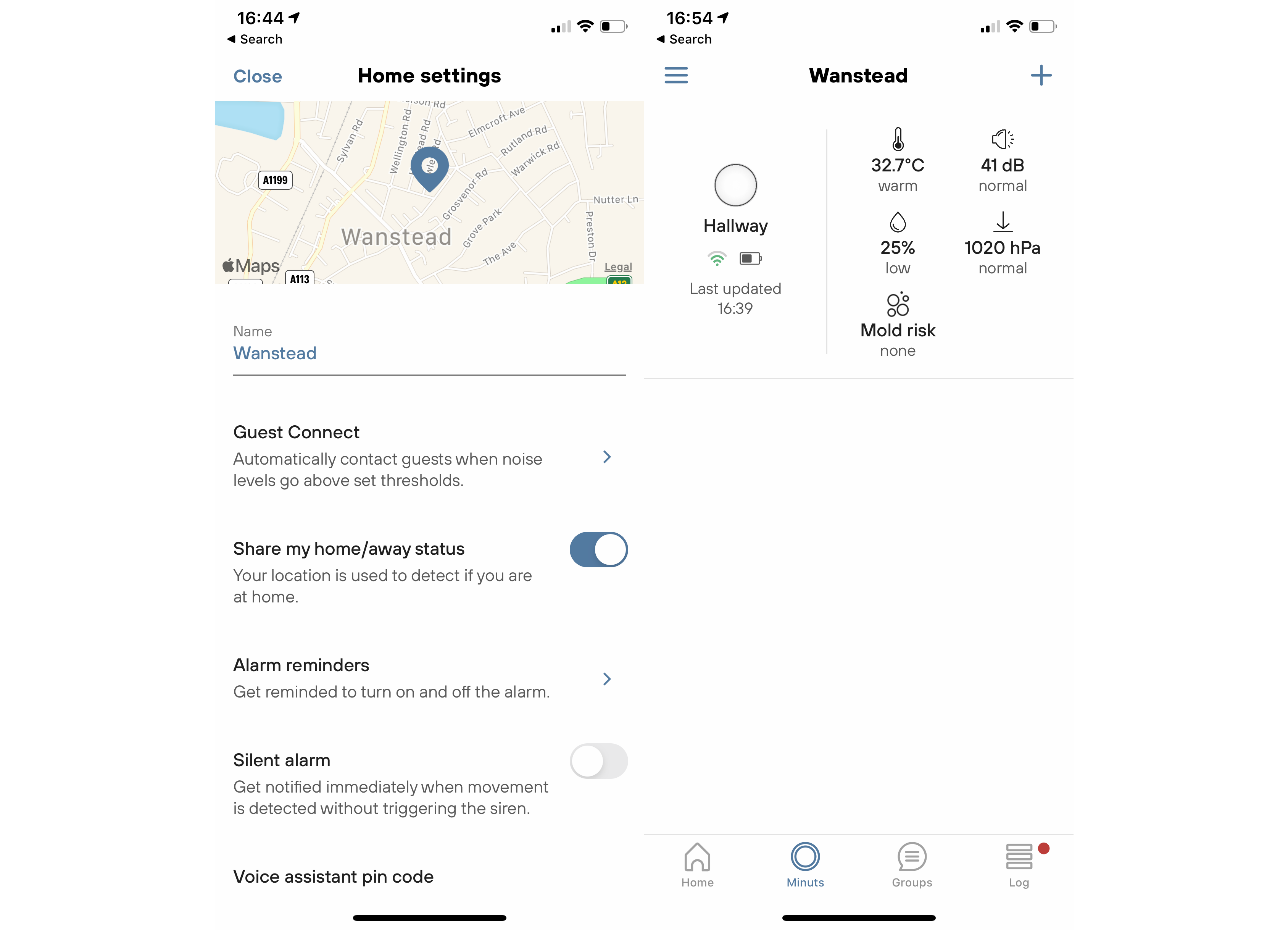 Minut can also listen out for other alarms going off, so if a smoke alarm is triggered, you’ll get a warning that something has happened, potentially giving you time to send someone round to fix the problem. Likewise, Minut can be set to listen for a window being broken, although that does decrease battery life.

New is the Nightlight feature, which lets the Minut light up during the hours you set when motion is detected. It’s a gentle light but can be a neat way of making sure that guests can see where they’re going.

Should you buy the Minut Smart Home Alarm?

If you want a smart alarm for your main home, the Minut Smart Home Alarm is a little limited, with no cellular backup and no additional sensors or cameras as an option. I recommend the Ring Alarm instead.

However, if you do have a second property that you let out, the Minut Smart Home Alarm is the perfect choice for this. It adds security and monitoring for when you can’t be there, but protects privacy and ensures that your guests are keeping quiet. For this situation, it’s a great addition.