What is the Ministry of Sound Audio S Plus?

The Ministry of Sound Audio S Plus is a compact portable speaker. Its closest competitor – the Bose SoundLink Mini – proved that it is possible to achieve truly large sound out of a small box once you’ve figured out how to use passive radiators.

The Ministry of Sound Audio S Plus is a little less ambitious and, contrary to expectations of a bassier-than-Beats brand, doesn’t even attempt to kick out massive bass. Instead, it includes some pretty smart extra features, such as stereo pairing and a stand that allows you to place the speaker upright. However, at £129, there are better-sounding alternatives. 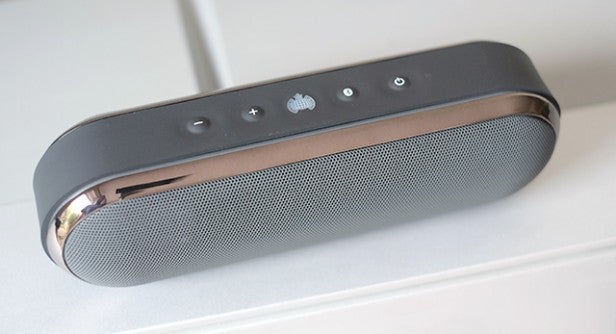 Ministry of Sound Audio S Plus – Design and Features

In the past year, the Ministry of Sound Audio S Plus’ style has become one of the most common in Bluetooth speakers. It’s compact enough to grip with thumb and forefinger and almost be able to touch fingertips, which is about as small as you can get while still, with clever engineering, being able to sound pretty big.

However, this isn’t the flashiest speaker of its kind. In fact, it’s anything but. The Jam Heavy Metal and Pure Voca present a similar design to the Bose SoundLink Mini, offering metal-bodied speakers for well under £100. However, the Ministry of Sound Audio S Plus is made from plastic. 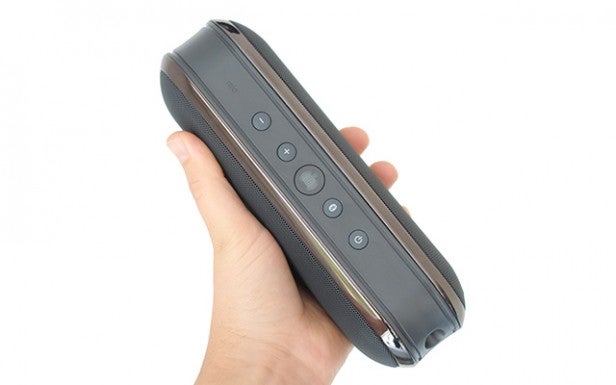 Although some of the finishing touches look like they’re aluminium, they’re actually plastic. It’s only the thick band of rubber that slips around the Ministry of Sound Audio S Plus’s middle that stops it from looking cheap. It adds a hint of toughness, and covers up the micro-USB charge socket.

The speaker doesn’t come with any full-on waterproof credentials beyond IPX4 splash-proofing, but it should be able to take some punishment.

The rubbery band around the speaker’s middle also acts as a strap when it’s removed from the sides. There’s a bung that slips into the body, holding it in place.

It isn’t the most convenient design, though. You need to remove the rubbery part to access the charge socket and 3.5mm aux input, but you’ll want the rubber in place when playing music at a decent volume – the bass vibrations will otherwise cause the speaker to go for a walkabout on a table.

All in all, it’s a little high-maintenance. 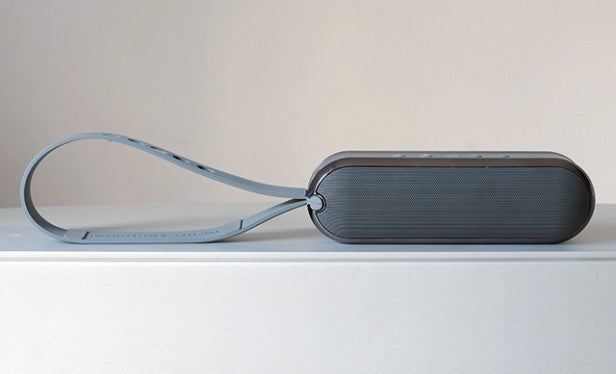 Strip the rubber part off completely and the Ministry of Sound Audio S Plus seems lighter and cheaper than several more affordable speakers. An accessory that sets it apart is the metal stand that’s included in the box.

This is one of the few compact Bluetooth speakers that you can make look more like a home-cinema satellite speaker, which is an all-round classier look. From a more practical perspective, the stand also cuts down on the amount of space the speaker takes up on a table.

However, I’m not convinced that the “Plus” version of this speaker is worth the additional £50 outlay. The difference between the two? The finish is a little nicer and you get the metal stand in the Plus edition. 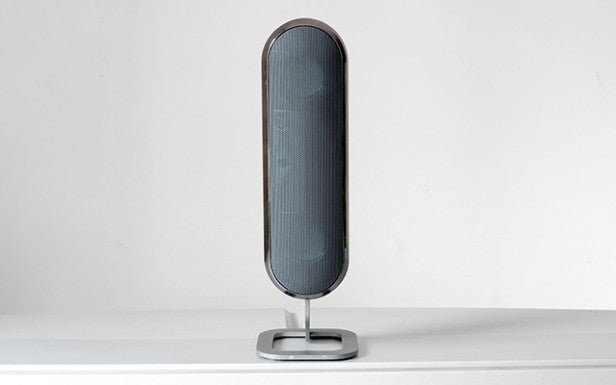 Both offer an impressive “up to” 15 hours’ playback off a charge. You also get NFC for easy pairing, but at times it was a struggle to get the Ministry of Sound Audio S Plus to enter pairing mode, despite having a dedicated Bluetooth button. 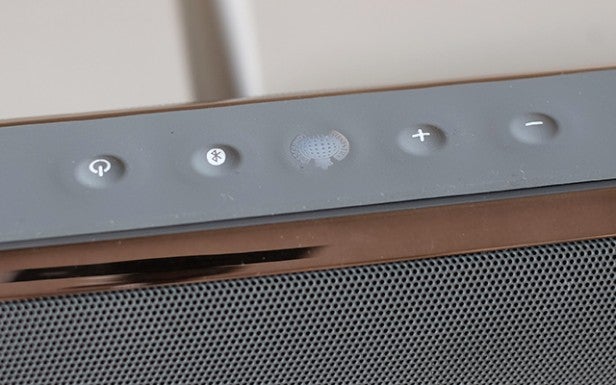 It’s with the sonld quality that the Ministry of Sound Audio S Plus disappoints the most.

First, the sound signature isn’t at all what you’d expect from a brand associated with dance music and a club with a legendary sound system. Bass is less powerful than most other speakers of this size that I’ve used over the past couple of years. 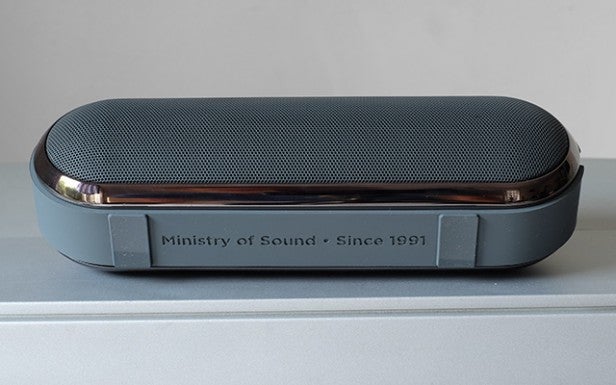 This is despite the Ministry of Sound Audio S Plus using a similar driver array to its rivals. It has two 2-inch active drivers and a passive radiator. That’s the part that can make even a dinky speaker sound pretty powerful.

Only having so-so bass is better than having massively overpowering bass, but the Ministry of Sound Audio S Plus offers nothing elsewhere to make it stand out, or even match its competitors. For example, the Jam Heavy Metal delivers sound that’s far more detailed, features better bass and is more expansive too. You can find that speaker for as little as £59 (its RRP is £119). 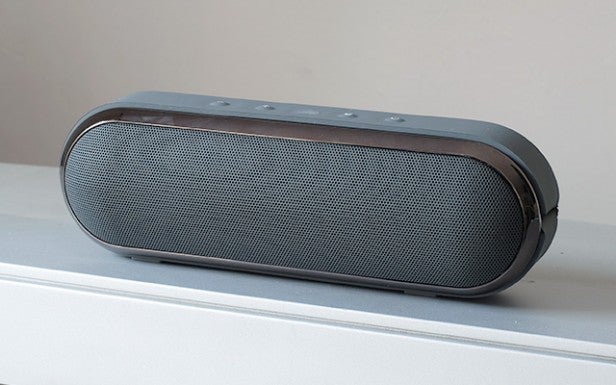 At high volumes it begins to sound quite congested and confused. There’s little sense of “hi-fi” to make up for the relative lack of bouncy fun.

To those who haven’t heard a speaker in this class, the Audio S Plus may sound punchier than you might expect – but there are much better alternatives out there for the money. 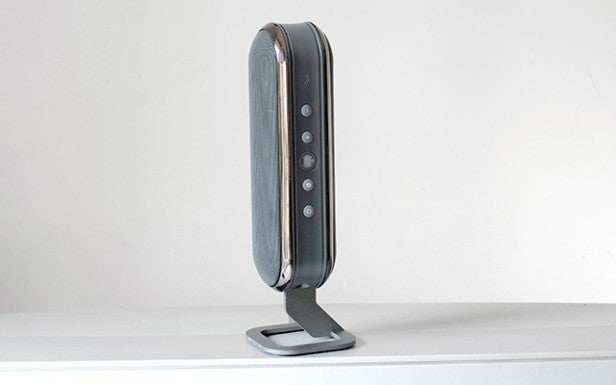 Should I buy the Ministry of Sound Audio S Plus?

The Ministry of Sound Audio S Plus is a passable Bluetooth speaker. It looks good enough, offers splash-proofing and can sit up on its end for a more sophisticated look.

However, there are much better alternatives out there. Build quality, sound and ease of use are uninspiring, especially when there’s now a wealth of options in this class.

If you’re willing to spend a little more then the Bose SoundLink Mini II is a good option. If your budget won’t extend that far then the Jam Heavy Metal and Pure Voca both offer more fun sound for less cash.

The Ministry of Sound Audio S Plus is a highly portable Bluetooth speaker, but for sound quality it can’t keep up with the competition.