What is the Ministry of Sound Audio L Plus?

The Ministry of Sound Audio L Plus is a large wireless speaker. It joins two others in the series that I’ve looked at recently, the Audio S Plus and Audio M Plus – the small and medium units.

This speaker is aimed at folk who don’t require portability, and are willing to pay £300 for a much beefier sound. However, it isn’t such a smash-hit on the sound front. 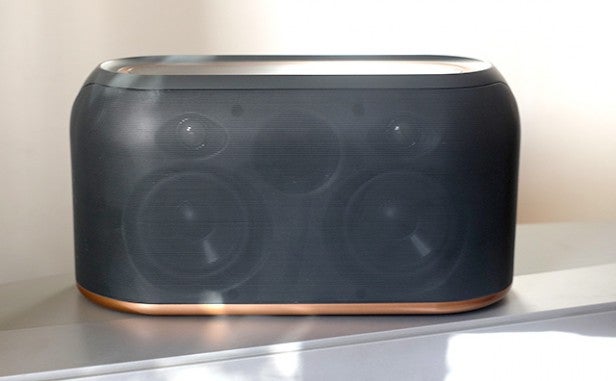 Ministry of Sound Audio L Plus – Design and Features

It may be large, but the Ministry of Sound Audio L Plus remains a pretty lounge-friendly wireless speaker. It weighs 2.6kg and would happily fit onto a deeper bookshelf, particularly since it has no rear bass port to ruin the sound should you place the speaker too close to a wall.

However, it’s the only model in the new Ministry of Sound series that’s non-portable. As well as being relatively sizeable and heavy, it’s mains-powered; there’s no battery.

The power block is built into the body, though, which means that only a basic figure-of-eight plug is required to get the Ministry of Sound Audio L Plus working. 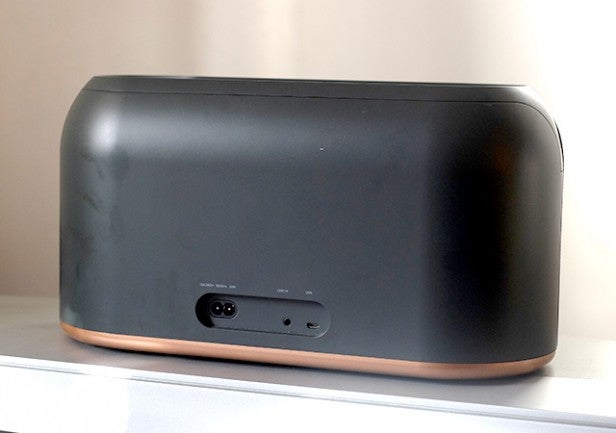 Looks-wise, it’s pretty similar to the Ministry of Sound Audio M Plus I reviewed recently – although it’s three times the size. The body is made of curvy hard plastic, except for the metal grille, which covers almost all of the front of the L Plus.

While you’d never know it from the images on the Ministry of Sound’s website, on the top of the L Plus – around the logo area – is a touch-sensitive panel that lets you alter volume by swiping. It controls the digital amp inside.

In terms of buttons, pairing and power buttons sit on the side, while a aux 3.5mm input can be found on the rear of the unit. It’s pretty simple. 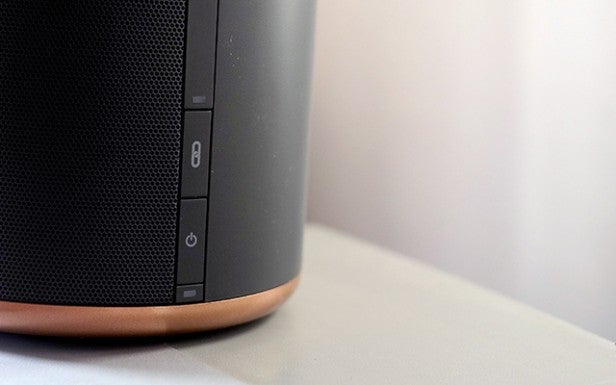 The Audio L Plus may come across as quite a big, dumb speaker, but it has good functionality. It streams over Bluetooth, with the aptX codec if available, or Wi-Fi.

Bluetooth is the simpler of the two, with the speaker able to output all the audio coming from your phone, including message alerts. Wi-Fi can be a little fiddlier. For example, it didn’t get on with my Netgear test router at all, but once setup it lets you use Spotify Connect as well as Ministry of Sound’s own app. 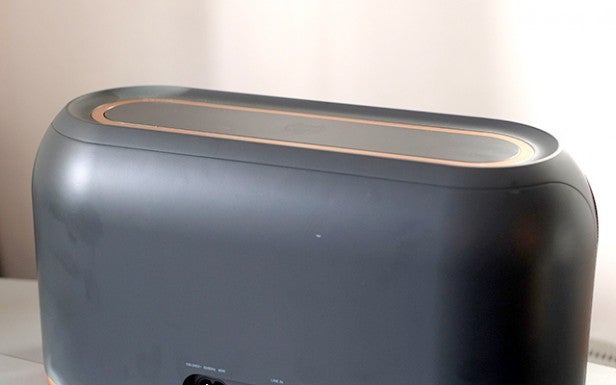 The Ministry of Sound app is similar to the Sonos one, in that it will allow you to stream locally stored tracks, from Spotify and any DLNA servers you might be running in your home. There’s also the Ministry of Sound Radio, which has a whole bunch of stations including one that streams live from the MoS club.

The real strength of the app, though, is that it offers multiroom-style control if you invest in multiple M Plus or L Plus speakers. However, in this regard you should be aware that as quite a young system, the Ministry of Sound series may take some time before it reaches full speed, software-wise. Right now, it’s perhaps a little basic.

Of course, the main reason for buying the Ministry of Sound Audio L Plus is that, being bigger, it’s going to sound larger than the other MoS speakers. And it does.

Strip away the Ministry of Sound Audio L Plus’s front grille and you essentially have two small bookshelf speakers, somewhat joined together with a single bass reflex port around the front. The main mid-bass drivers are 4.5 inches across and each of the tweeters measures an inch. 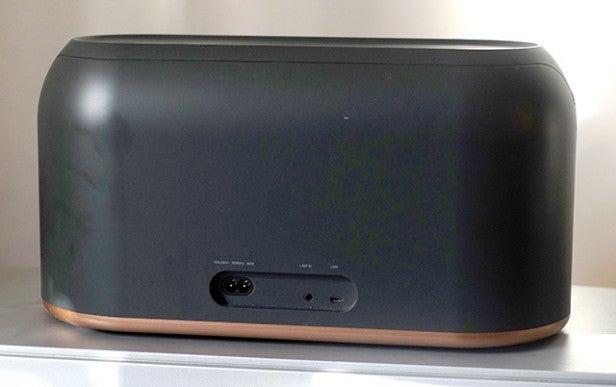 Before reviewing the unit, I expected the Ministry of Sound Audio L Plus to include a much larger dedicated bass driver, similar to the one in the Klipsch KMC3, which I reviewed a few years back. As with the M Plus, however, bass is better-controlled than you might expect, lacking the sort of unruly rumble that makes some speakers sound like they’re being played as a tube train is passing under the house.

There are downsides to the Ministry of Sound Audio L Plus style, though. While it can play a 30Hz sound wave in isolation, in the context of a busy mix, the low-bass/sub-bass cut-off point is as poor as it is on a much smaller speaker. At a certain point it just stops outputting low frequency bass, almost exactly where the Bose SoundLink Mini 2 gives up. The Klipsch KMC3 doesn’t do this.

As a result of using relatively small drivers and a sound-processing system designed for them, the depth of bass is at times slightly disappointing for a speaker of this size.

Although it will be sufficient for most, true base fans looking for that real pounding bass feel should look elsewhere. 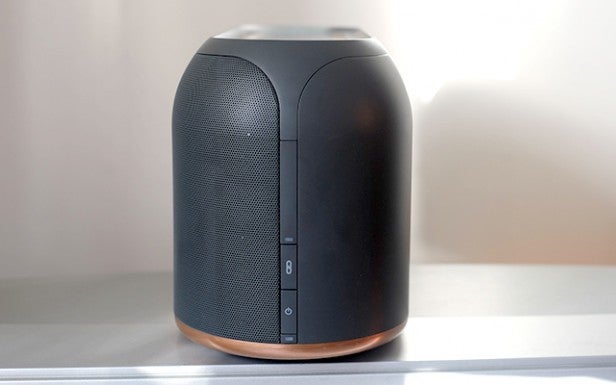 There are other parts of the sound that I did find grating, though. While the Ministry of Sound Audio L Plus has some grunt to it, its dispersal of sound is fairly narrow and the scale of presentation is pretty limited. Other speakers of this size are better at filling rooms.

The mids aren’t particularly good either. There’s unfortunate mid-bass bloat, which is used to make the sound appear much bigger and thicker than that of the Audio M Plus – even though it uses speaker drivers similar to the ones used on that unit.

In my opinion, this strategy doesn’t work well at all. Just as the low-low-frequency bass is sacrificed as a mix becomes a little busier, this mid-bass sits on the sound like a pillow, hugely reducing its clarity and sense of definition. It confuses arrangements and often kills separation.

But its most destructive knock-on effect is to vocals. The Ministry of Sound Audio L Plus is poor at bringing out mid-range detail and texture, with much of the bulk in vocals made up by frequencies that sit lower down the range.

I was surprised by the Audio M Plus, whose sound was far leaner than I expected – but it works. In trying to tease a much more powerful sound out of similar drivers in the Audio L Plus, Ministry of Sound ends up with a tone that I find much more problematic. It trades definition of thickness, and doesn’t supply enough weight on the bass front to make its sound stand out among speakers out to really pump out big bass.

Quite simply, the Audio L Plus doesn’t have the sound to justify its size – and its sound balance is a little off too. 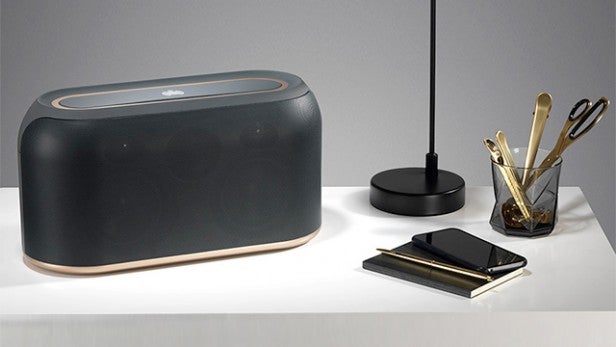 Should you buy the Ministry of Sound Audio L Plus?

The main draw of the Ministry of Sound Audio L Plus is that it gets you Wi-Fi and Bluetooth streaming at a price that’s lower than the excellent new Sonos Play:5. However, I have a few too many issues with the sound to recommend diving in for that saving.

I think Ministry of Sound hits a satisfying formula with the Audio M Plus, which is a very clear-sounding speaker with good tone and a great balance of features. It has a battery for portability, and the same wireless credentials as the Audio L Plus. In some respects, its tone is actually better than its bigger brother, with a much better-defined mid-range.

However, the L Plus can deliver tunes with more gusto. But if you’re after room-filling sound, it’s possible to pick up a speaker that’s more “hi-fi”-sounding for the cash. And if you can afford it, I’d opt for the Sonos Play:5.

Rich in wireless features, but confused, crowded mids hold back the Ministry of Sound Audio L Plus from delivering truly convincing sound.