Minecraft RTX feels ahead of its time. It’s a jaw-dropping evolution for the series, but one that won’t be accessible for the majority of players due to the lofty system requirements. Still, those with the necessary hardware will be amazed by the Minecraft RTX beta and should certainly try it out – if not for the sandbox building, then at least for a sneak peek at the future of video game innovation.

Minecraft RTX is the closest thing you can get to a sequel for the ground-breaking sandbox title, with a string of substantial updates resulting in a transformative experience.

This will likely come as a surprise to many as, on the surface, Minecraft RTX looks to be the same game as before just with a visual-boosting ray tracing update. Many other titles – from Battlefield 5 to Control – have also seen ray tracing patches. While the new light-rendering technology has made things look nicer, the overall impact has been minimal, but this is not the case with Minecraft RTX.

Firstly, Minecraft RTX is using path tracing here, which can be described as a more advanced alternative to ray tracing. While path tracing is far too demanding on the GPU to be a viable option for most video games, it’s possible with Minecraft thanks to its simplistic textures and design.

The effect is immediately obvious. While you sometimes have to squint to find the improvement that ray tracing provides for games such as Metro Exodus, the updated visuals provided by path tracing in Minecraft RTX is as clear as night and day. 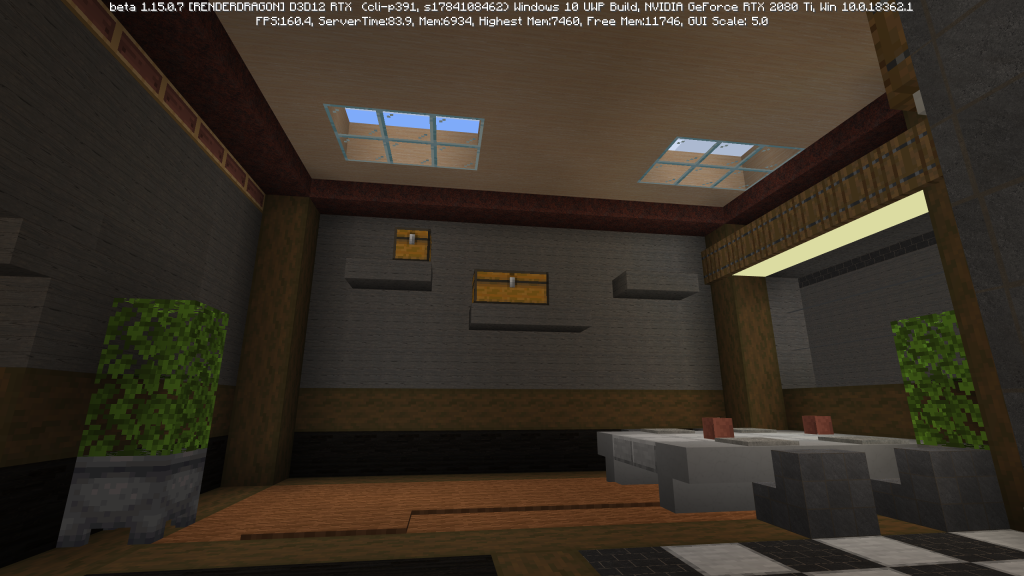 With the RTX update, sunlight now streams through the windows, metallic objects feature a glossy aesthetic and radiant blocks such as lava glow to illuminate dark dungeons and caves.

As I explored the various worlds built by renowned Minecraft players, I could sense a newfound atmosphere. Underwater palaces glistened in the dark depths of the ocean, drawing me in like a moth to a flame. Underground caverns felt more threatening, with the orange hues of the lava providing a hellish glint. And as I stood atop a castle, looking out into the wilderness in the dead of night, the darkness appeared more engulfing and opaque – I could see less now, but the illuminating torches and campfires in the distance became more prominent for a mesmerising scene. 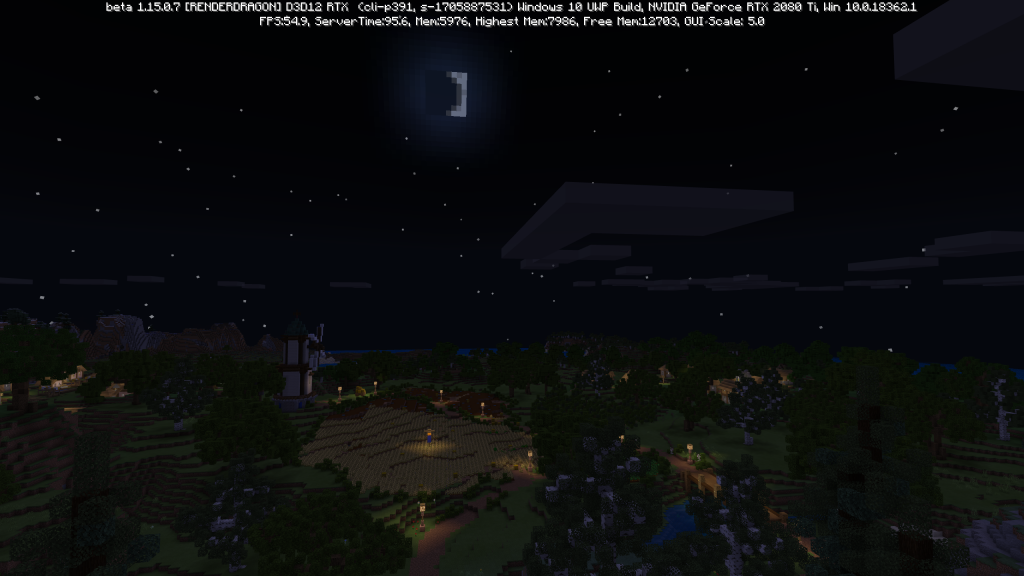 Mojang and Microsoft haven’t simply flicked a switch to allow path tracing support in Minecraft RTX. A lot of work has been done to bake new features into the game to get the absolute most out of the new light-rendering technology.

For instance, new physical elements for blocks have been introduced, so they can now feature properties such as Metallic, Normal, Roughness and Emissive. The former three will each behave differently when rays of light are reflected off their surface, giving oodles more variety between block types. Emissive blocks, meanwhile, can now act as more effective light sources.

With these new tweaks to block types, you’ll suddenly have to adopt a new mindset when building your creations, with light playing a substantially greater influence. Will you implement coloured windows for a rainbow light effect? What kind of light source will you use for after dark? And how will the time of day affect the appearance of your structures? Minecraft RTX has an incredible new depth, which only grows larger as you keep digging deeper. 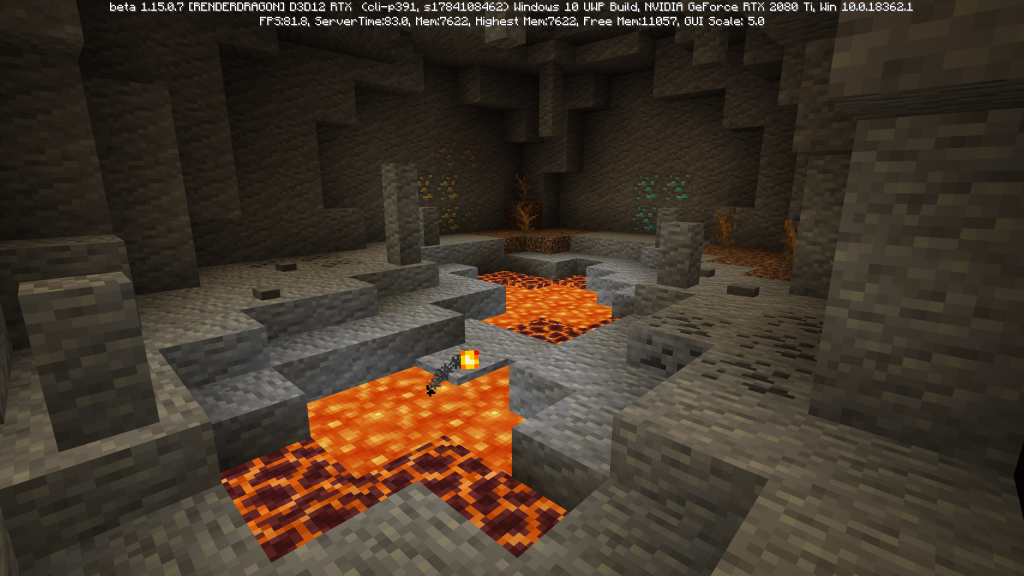 Minecraft RTX is a transformative update then, but it will, unfortunately, be exclusive to those with compatible hardware. The Minecraft RTX update is free, but you’ll need one of Nvidia’s RTX graphics cards to run it. What’s more, you likely won’t get the best experience if you’re just using an RTX 2060 graphics card, as this game is incredibly intensive on the GPU.

I used an RTX 2080 Ti graphics card for testing – the most powerful consumer GPU currently available – and while it handled Minecraft RTX competently, the performance wasn’t as comfortable as I expected. With RTX deactivated, I saw sky-high frame rates with an average of 169fps. Once I turned RTX on though, the average frame rate fell alarmingly down to 35fps.

This isn’t a massive concern though, as Nvidia has prepared for this by introducing DLSS 2.0. Minecraft RTX will be one of the very first games to support this technology, which effectively uses artificial intelligence to upscale to the native resolution to alleviate pressure on the GPU. This worked a treat in my testing, boosting the average frame rate up to 75fps with RTX activated. 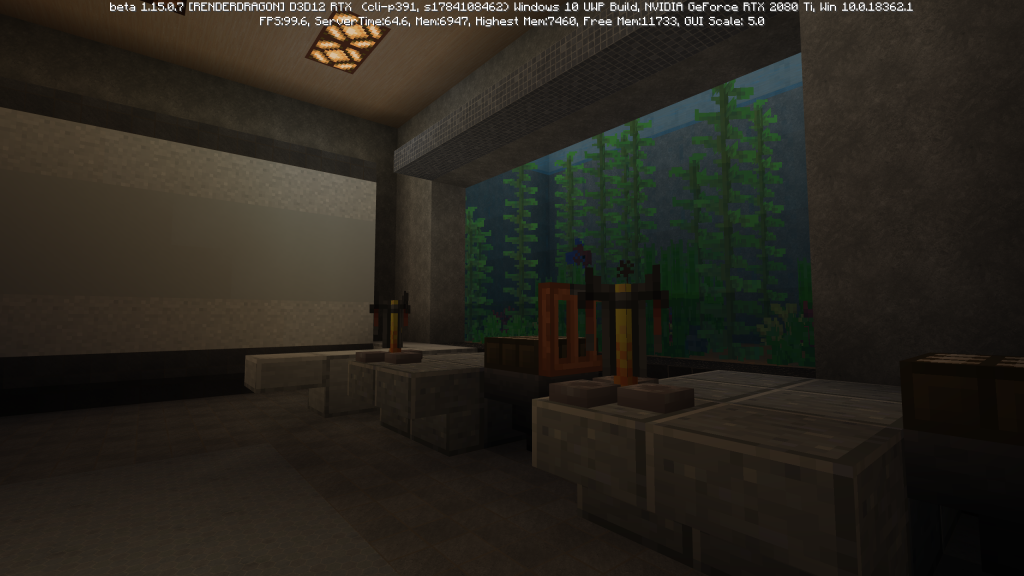 The previous iteration of DLSS did have slight issues, causing the upscaled image to appear slightly distorted and blurry. I’ve looked out for similar downgrades with Minecraft RTX but haven’t noticed anything so far. DLSS 2.0 seems a massive upgrade, but it’s still worth keeping an eye on for now.

However, this testing was done with default settings, which has limited the “ray tracing distance” for Minecraft RTX to 8 chunks. In layman’s terms, this means the graphical settings have put limitations on how much of the world the game will render in one given scene, resulting in a restricted view.

This is a clever trick to alleviate the demand on the GPU and ensure high frame-rate performance, but I have to say that the restricted view of objects in the distance (as seen below) was pretty frustrating. Fortunately, you can boost the “ray tracing distance” up to 24 chunks in the settings, but that dropped the frame rate performance from 75fps down to 45fps, despite using the DLSS 2.0 upscaling. This is still an acceptable performance, but when you factor in that I’m using the monstrously powerful RTX 2080 Ti graphics card for testing, you have to be concerned how the RTX 2060 and RTX 2070 GPUs will cope.

You can’t be critical of Nvidia and Microsoft about this, as they’ve both done the best possible job to provide workarounds to get Minecraft RTX running with path tracing – and we are dealing with revolutionary next-gen technology here.

But the point remains that Minecraft RTX is an incredibly demanding game, and you’ll need very expensive hardware to get the best out of it. That will mean Minecraft RTX will be reserved to a very exclusive group, which is disappointing considering a big appeal of the original Minecraft is that it works on most computers.

Minecraft RTX is also still in beta, so there are still a fair few technical issues running amok. I noticed a few blocks (particularly highly reflective blocks) would flicker in and out of existence, while clouds appeared far too opaque and frustratingly obstructed my view. Microsoft and Nvidia are already aware of these issues (as well as several others) and are working on fixes.

The beta also, unfortunately, restricts features such as multiplayer realms, 3rd party servers or cross-play, but these are small gripes when you get an early sneak peek of Minecraft RTX in return.

Minecraft RTX is an incredible free update for the sandbox title, with the new lighting, shadow and reflective effects not only providing gorgeous visuals but also offering new depth to the building blocks at your disposal.

Lighting now plays a far greater role in your creations, allowing new visual tricks that weren’t previously possible. This is almost definitely the most exciting update Minecraft has seen yet, opening up many more options in each player’s toolkit.

But while the Minecraft RTX update is free, the hardware needed to run it certainly isn’t. Nvidia’s RTX graphics cards are very expensive, and you’ll want one of the most powerful options if you want to run this game with ideal performance settings.

Minecraft RTX feels ahead of its time then. It’s a jaw-dropping evolution for the series, but one that won’t be accessible for the majority of players due to the lofty system requirements. Still, those with the necessary hardware will be amazed by the Minecraft RTX beta and should certainly try it out – if not for the sandbox building, then at least for a sneak peek of the future of video game technology.