Available on Nintendo Switch
Let’s be clear, Minecraft: Nintendo Switch Edition isn’t the definitive version of the world’s favourite sandbox game. The PC version is still the most advanced, most customisable and most fully featured. The PS4 and Xbox One versions offer up sharper 1080p/60 visuals and support for the largest 5,120 x 5,120 world sizes, as opposed to the Switch’s 3,072 x 3,072 medium-sized maps. Yet weirdly enough, the Switch Edition is rapidly becoming the version of choice in my multi-console household, just for the flexibility you gain by being able to play one version on your TV set and on the move.

Here’s why. No more complaints about hogging the TV when you’ve just got going on your next big project. Pull the Switch from the dock and you can keep on ‘crafting in a quieter corner of the house, or even in the garden if it’s warm outside. Have to get the train but you’re busy exploring? Just grab your Switch and you can cram in whatever time you can while you travel. This is the Minecraft you can play in the lounge, in bed, on the sofa and just about anywhere else, but that still looks and feels like the real deal.

It’s certainly the definitive mobile version, with better controls than the iOS and Android versions and a more complete Minecraft experience than was possible on PS Vita. Despite a disappointing 720p resolution, it still looks great – in the Minecraft sense – on your TV, and runs with only a fairly minor reduction of draw distance on the undocked Switch. You’ll see trees and objects popping in with a little more regularity, but not to any seriously distracting extent. 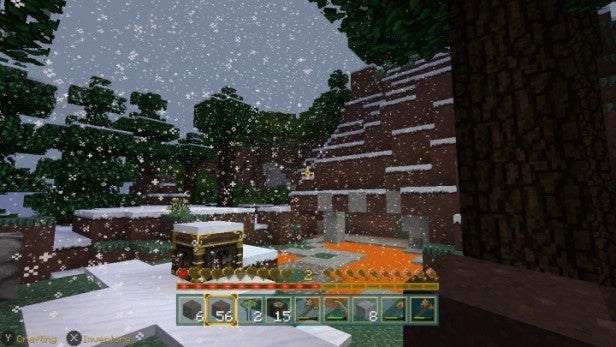 Otherwise, this is the Minecraft you already know and presumably love; a game of creation, crafting and, sometimes, desperate survival in a square-edged world of chunky mine-able blocks. In terms of the basic gameplay, it isn’t hugely different on Switch, but that’s okay. Minecraft hasn’t lost any of its oddball magic.

It doesn’t matter if you play it as the world’s most engaging digital construction kit, as a survival sim or as something in-between; it works beautifully, and the interface enhancements, tutorials and on-screen tips make the modern version a whole lot easier to get into than the early PC releases.

Yet Minecraft can still be challenging, frustrating and even a little scary in the early stages of Survival Mode, without ever losing its peculiar blocky charm. Playing Survival again for the first time in ages, I’ve been surprised at how tense it can be when you’re trying to build and the zombies, slimes and creepers keep on coming. It has its own very peculiar atmosphere.

This and all that complex, creative gameplay makes Minecraft as quietly absorbing as it’s ever been on the Switch, with controls and a general feel that soon become second nature if you’re already used to the PS4 or Xbox One versions. The biggest problem is knowing when to put the damn thing down. 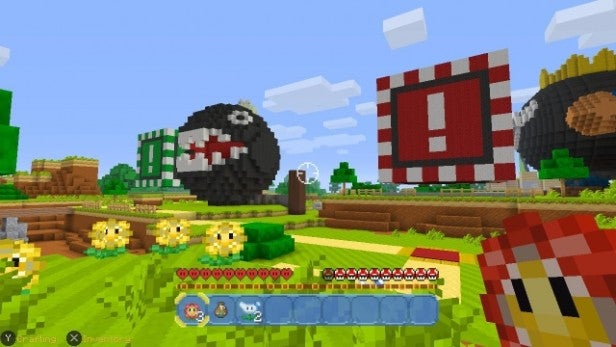 Be warned, though, that there isn’t much in the way of exclusive content, with the nearest thing being the Super Mario Mash-Up Pack that made its debut with the Wii U version. With its re-skinned critters, craftables and scenery, this gives creative Minecraft players plenty to get their teeth into, and I – and the Minecraft maniacs in my family – have already had a ball building Mushroom Kingdom houses, farming Goomba chickens and Koopa Trooper sheep.

Admittedly, there isn’t a lot going on here beyond re-skinning, with classic Mario enemies standing in for the usual Minecraft mobs and the fireflower taking over lighting duties from the traditional flint and steel But it’s hard not to be impressed by the attention to detail, from the Mario themes that grace the soundtrack to the Mario paintings you can mount on every wall.

And if you need a demonstration of what you can do with all these goodies, just spend an hour or two exploring the Switch Edition’s pre-built Super Mario World. It’s a bit of a Mario wonderland, full of cleverly crafted Minecraft mechanisms to ape the behaviour of the usual pipes and springboards – not to mention gargantuan statues of all your favourite Mario stars. Platforms take you to different areas and secrets, while you’ll come across delights such as Toad houses linked by underground mine-cart railways, archery challenges and some tricky platforming puzzles. There’s a good few hours of gameplay in just exploring it all. 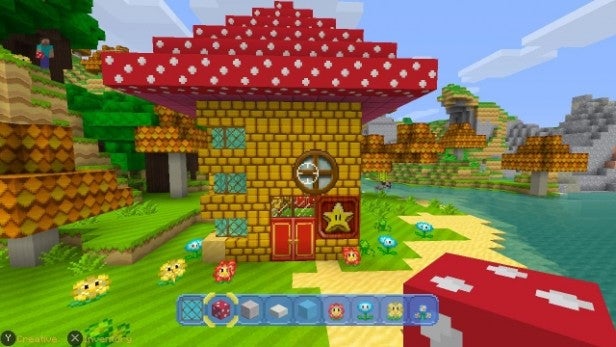 Mario and Minecraft aren’t always totally simpatico. Some of the Survival Mode gameplay – mining, crafting, finding sustenance and fighting – doesn’t blend seamlessly with the kind of easy-going exploration the Super Mario World encourages. Even getting going with the basic tools can be a challenge, and I suspect a lot of players will fiddle with the options to make life easier. Meanwhile, those platforming-style puzzles require a level of precision running and jumping that’s sometimes beyond the reach of Minecraft’s camera, physics and controls. You’ll need persistence as much as skill to see it all.

It’s also worth noting that while up to four players can play together on one Switch console, you’ll need extra controllers just to play split-screen with two; Minecraft’s controls demand a little more than a single left or right that Joy-Con can provide. Due to a lack of available controllers I’ve been unable to try four-player split-screen, but two-player seems nice and smooth in the worlds and areas that I’ve explored.

Otherwise, the biggest grumble is a familiar Switch issue; at £20, it’s significantly more expensive than the Xbox One and PS4 versions, or even the PC version if – as it nearly always is – it’s in a sale. Mojang has sweetened the deal with a range of bundled DLC, but that price may be enough to stop those who’ve bought the game on another platform diving in for a double-dip. That’s a shame, because Minecraft is another great game that feels even better just for being on the Switch.

Verdict
While other console Minecrafts have it beat on resolution and maximum map size, the Nintendo Switch Edition is the only version to give you all the authentic Minecraft goodness wherever and whenever you want to play.

It looks good, plays well and hits all the classic Minecraft buttons, but with the bonus that your Minecraft addiction is a little easier to fit in with normal life. Throw in some of the best themed Minecraft content around and you have a must-have for Switch gamers, albeit not the absolutely best version of the game.