Times have been tough for Nintendo in recent years – the Wii U has been a notable flop, and the Japanese giant’s dominance of handheld gaming via the likes of the 3DS handheld has been steadily eroded by the rise of mobile devices. So last year, after much soul-searching, it decided to adopt an “If you can’t beat ‘em, join ‘em” approach and start bringing its much-loved back-catalogue to iOS and Android, in conjunction with mobile specialist DeNA. Miitomo is the first fruit of that decision.

And it’s an odd one. Nintendo fanboys who were hoping to be able to play classic Zelda or Super Mario Bros games on their phones and tablets will be disappointed to hear that Miitomo isn’t even a game. Instead, it’s a typically beguiling and quirky, very Nintendoesque, take on social networking.

Nintendo describes the general ethos behind Miitomo as: “An app that lets you discover things about your friends that you might not have known.” Luckily, it proves rather more appealing than that makes it sound. We were able to get a couple of hours-worth of hands-on with it, and would be more inclined to describe it as a means of generating a Mii-based social networking presence that allows you to flaunt your commitment to all things Nintendo.  It’s true that it does foster some unusual interaction with your friends, and it notably contains some interesting technology which brings your Mii-persona to life. It’s not unlike a more personalised take on Tomodachi Life.

In Miitomo, your first task is to create a Mii (although you can easily import an existing one, via a QR code). Miitomo’s Mii Maker element is the best Nintendo has developed yet – photograph yourself on your mobile device, and it spews out a stream of potential Miis; the one you pick can be edited to a fine degree. 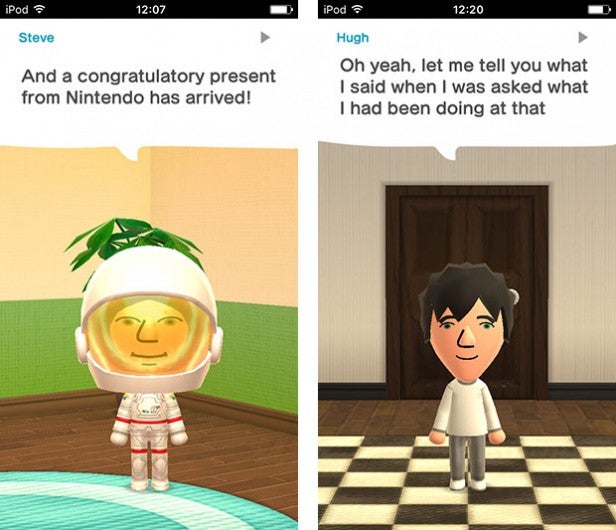 Once you’re happy with your Mii, Miitomo begins an ongoing dialogue in which you’re asked questions which veer towards the frothier side of life, covering topics like favourite foods and films. As you answer those questions, the app tries to interpret your answers, animating your Mii and manipulating its facial expressions accordingly. You can skip questions if you like, or hide your answers so that your friends will have to cash in sweets, which you acquire as prizes in Miitomo, in order to see them.

Adding friends is key – Miitomo is pretty pointless without them. That’s something you can do face-to-face, by Bluetoothing between devices, via your My Nintendo account (which recently superseded Club Nintendo) or, more intriguingly, by searching your Facebook and Twitter friends and followers. You can’t hold direct, real-time conversations with your friends (Nintendo is adamant that it doesn’t want Miitomo to be yet another messaging app). Instead, friends will randomly visit the room which is your Mii’s habitat with questions and observations of their own. Again, the answers you provide will trigger physical responses in the visiting Mii.

The app contains a number of activities that will keep inveterate tinkerers occupied. The Miitomo Shop is a treasure-trove of clothing items for your Mii, themed according to a vast variety of classic Nintendo franchises. There are also some wonderfully outlandish outfits to buy there, such as a giant hotdog. It is possible to buy items in the shop with real cash – which might send some flak flying Nintendo’s way (the app is free). But we found that the Miitomo Points rewards on offer were pretty generous; after 15 minutes’ play, we could afford one of the most expensive outfits. 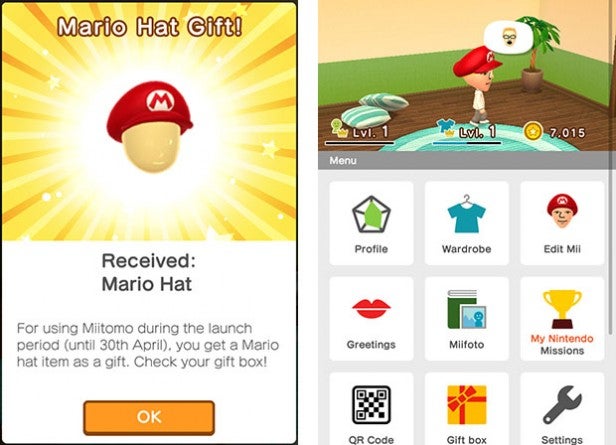 Miitomo Drop is the closest thing to a game in Miitomo, but it’s extremely basic. Each play requires a Game Ticket, and it simply lets you drop your Mii onto a virtual pachinko table, in the hope that it bounces around and hits an icon which brings a rare item of clothing or outfit.

Perhaps the most fun activity in the app is Miifoto. It lets you create mad little tableaux with your Mii added to backgrounds such as typical-looking parts of cities like Kyoto and New York. You can fiddle around in Miifoto for hours, resizing and animating your Mii, giving it strange facial expressions, adding speech-bubbles, importing pictures from your camera-roll to act as backdrops and the like. Plus you can post your creations to Instagram, as well as Facebook and Twitter. We suspect that Miifoto will be Miitomo’s most popular element.

The final element of Miitomo – at least as it stands at launch, since it can be easily updated – is a hint of RPG gameplay. You can level your Mii up according to three criteria: social, popularity and style. Essentially, this is another means of rewarding you for simply playing the game, and making sure that you change costumes frequently.

Miitomo has definitely achieved its aim of being a peculiarly Nintendo-style take on social networking – it’s very cute, quirky and should put a smile on your face if you dip into it for 15 minutes a day or thereabouts. But it’s hardly earth-shattering, and really will only appeal to the most committed of Nintendophiles. But at least it’s a free download, so if you fancy adding a bit more Nintendoness to your life, it won’t cost you anything. It would be nice, though, if the four further mobile apps, which we’re promised will result from the Nintendo/DeNA tie-up over the course of the next twelve months, could actually provide some of the classic retro gameplay that Nintendo has sitting around in its vaults.