It’s a well-known fact that the analogue TV signal in the UK is going to be switched off, for good, in the next few years. It’s an event that will mark one of the biggest exercises in technological obsolescence ever known. Overnight, millions of TVs will become extinct, unusable without an accompanying digital decoder box.


Which makes it a bit weird that there are still some companies manufacturing and selling products that based on an analogue TV tuner. Take this TV tuner and video conversion box from Miglia, for example. It’s been designed as a complement to the ultra-stylish Mac Mini, and its sleek aluminum looks mark it out in a market where prosaic plastic USB dongles predominate.

It claims to let you watch TV on your Mac, record it as you would on a digital video recorder such as Sky Plus and make the process of converting that footage to an iPod-friendly format straightforward. All sounds very high-tech, doesn’t it? Yet underneath the flashy exterior lurks a soon-to-be defunct analogue TV tuner, which means you’ll only be able to use it for three or four years before that part of it becomes useless.


It’s a huge shame, because in other respects, the TVMax+ is a well-thought out and well-designed product. It’s easy to setup and use for starters, and recording TV is simple. You can perform the usual digital recording tricks such as pausing live TV so you can pop out to make a cup of tea, rewinding and forward winding it. It works in conjunction with the tvtv.co.uk EPG service for scheduling programme recordings – and you can even do this remotely – as long as you leave your Mac on while you’re out of the house. There’s even a remote control in the box so you can control things from the comfort of your sofa if you wish.

You can also use the TVMax to digitise old analogue video tapes and camcorder footage, and it’s here that the device’s strength lies. The box has a hardware encoder built into it so, rather than relying on the processor in your Mac to do all the work which can tie up valuable system resources, you can capture footage real time and still use the machine to work or carry out other important jobs. All you do is plug your source in via the composite or S-Video inputs, switch source in the software and hit record.

And the TVMax+ also makes it very easy to capture this footage in iPod-friendly (and other) portable formats. Because of that internal encoding hardware, the box can crunch the video signal effortlessly on the fly, so transferring content from your set top box recorder to iTunes for on the go entertainment, is simplicity itself. I converted several programmes recorded over the Christmas period and all of them transferred perfectly in 320 x 240 format with not a skipped frame or scrambled soundtrack in sight. A simple click, after footage has been captured, transfers the recorded movie instantly to iTunes or burns it to DVD. 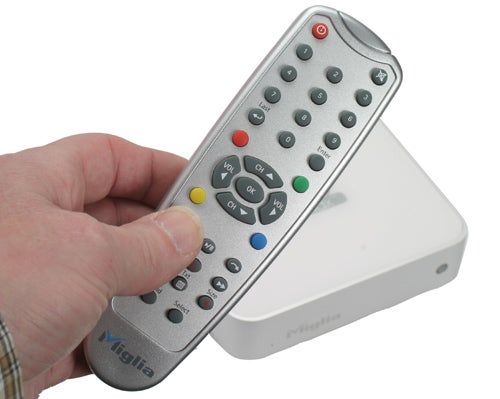 But it’s not just iPod owners who benefit from this simplicity: the box also has presets for Sony’s PSP and Apple TV, and will let you capture straight to DivX – an impressive list that might convince owners of other (gasp) non-Apple portable media players to take a look at the product.


The only snag with transferring footage this way is that, oddly, there’s no instant timer function. With the Miglia TVMax, you have to set up a scheduled recording that starts a minute or so in the future and then wait for the recording to begin before hitting play on your source device. The Archos 605 WiFi I reviewed in September allows you to simply choose how long you want a recording to run for, rather than rooting it to a specific time. This makes it far easier to manually transfer programmes or movies from video without fear of filling up your hard disk if you forget to turn it off, or getting the schedule wrong.


Alas, none of the good stuff really makes up for the Miglia TVMax+’s lack of digital TV tuner, because even if you ignore the TVMax+’s negative features and consider it solely in the light of its analogue video capture capabilities, there’s still the problem of the high price.


While it looks the part and performs its task admirably well, there’s not enough here for the sort of money being asked. As a result, if you’ve £130 to spend on a TV tuner and video capture device for your Mac, I’d recommend you look elsewhere: the Elgato EyeTV 250 Plus, for instance, does the same job, but includes digital as well as an analogue tuner for the same cash.