Kickstarter projects floated by nostalgia always find themselves precariously balanced. Three years ago Mighty No 9 found itself catapulted well beyond all of its stretch goals to raise almost four million dollars. The dream that hoovered such a swollen pot was a spiritual sequel to Mega Man. Much of the original development team, including project lead Keiji Inafune was to reunite and create a modern version of the classic, adhering to a very specific blueprint of Japanese development from twenty years past.

The resulting game is, at least by Kickstarter standards, a great success. A complete package has been delivered to backers, and a retail version across several platforms is due later in the year. The game features nine Mighty robots, treacherous platforms, and a great deal of thought and energy on the part of its developers.

Related: The Legend of Zelda: Breath of the Wild preview

It’s clear that the subject matter has been revered in the game’s plentiful polish and creative design, plus Mighty No 9 brings a great deal of variety to the table. Players take charge of Beck, the titular ‘ninth Mighty’, the latest in a series of robots to have gone rogue, and who Beck must now defeat. Each of the nine levels are thematically unique: a mine, an industrial factory, a power plant, carrying with them their own sets challenges and unique enemies. 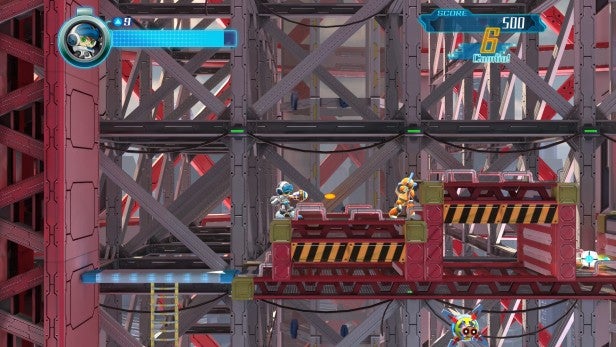 This is a game where jumping, and knowing when to shoot, plays second fiddle to every growing power and array of increasingly destructive weapons. Levels can be tackled in whatever order the player chooses, a testament to design which values reflex and simple construction over layers upon layers of new toys and hardier enemies. Knowing when to dash into Spitty-Bin-Thing (my own name) and shoot at Robo-Monkey-Man (also my own name) key. When it hits its stride, Might No 9 is a joy.

More troubling is Mighty’s unrelenting devotion to twenty year old mechanics, no matter how passe. Reviewing a Kickstarter project that is then made available for general sale is a confusing task. These games have been created at the behest of a niche audience, often to satisfy a craving that most gamers never experience. By what criteria should the end result be judged?

With that in mind, I’m unsure that the experience Mighty No 9 delivers will suit the temperament of most modern gamers, even within the current zeitgeist of punishing action games. This is the Dark Souls of cutesy platforming; a gauntlet which adheres to the unforgiving rulebook of 1993 with religious zeal. In the 23 years since the release of the original Mega Man, games developers have come to realise that certain design choices will only come to frustrate. A lack of save points, perma-death, large sections of repetition – these are all likely to cause sighs, moans, and eventually a game disc to be encased, shelved, and gather dust for the rest of its days.

Mighty No 9 features all of the above. 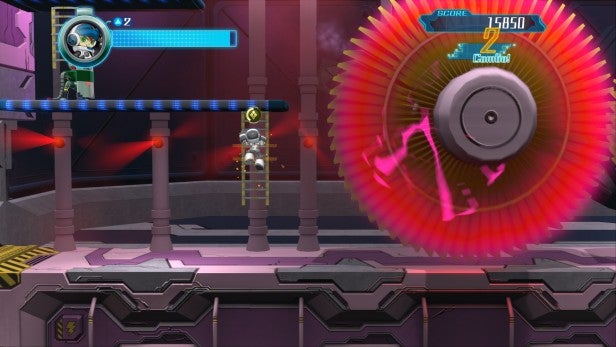 The fidelity with which Definitely-not-Mega-Man recreates the cruelty of old-school platforming is admirable, but sometimes exasperating. As standard, players begin each of the game’s nine levels with a decent block of health and a couple of lives. There are numerous obstacles which can instantly kill besides the enemies, be that falling off the screen or moving platforms which can crush. These in themselves aren’t terribly troublesome features, but Mighty No 9 is at points a ludicrously hard game and once the player’s lives are depleted, it’s game over: the entire level must be started from scratch.

Lightning reflexes are a must-have in any platformer, but occasionally, the feats of daring that Mighty requires of its players verges on the ridiculous. Boss fights, whilst creatively implemented with wildly different patterns of attack, are entirely unforgiving and often require levels of dexterity many players will find impossible. This is fine if the game allows for experimentation – even Dark Souls players can rest up at a nearby bonfire and simply throw themselves at the problem again and again. Unfortunately, Mighty’s finite lives, which are likely all but depleted by a level’s end, don’t encourage experimentation, but rather a desperate hopping about the screen attempting to preserve health. 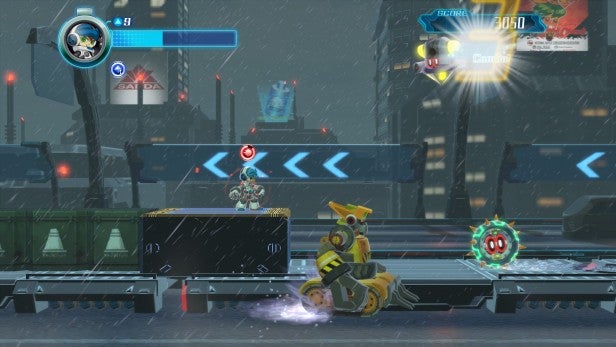 For many, a lack of hand holding will be a boon. One particular friend has repeatedly exclaimed to me that Prince of Persia: The Sands of Time ruined platformers ever after through its rewind mechanic which convinced many developers that failure shouldn’t necessarily lead to punishment. However if you’re like myself, then the acrobatic combinations of button presses required are challenge enough, and the prospect of dying at the last hurdle only to be forced into playing the same level all over again feels too much like work. Times have changed. Attention spans have shortened. And most gamers no longer possess the patience to endure Platformer Groundhog Day.

Of course, in some instances that’s exactly what people want, and thanks to the robust nature of the game’s core mechanics and faithfulness to its lineage, backers are more likely to enter Mighty No 9 with a smile. Simple mechanics with challenging configurations are hard to find these days. All too often developers will provide characters with wild sets of abilities which then merely require the player to walk up to the enemy and press the relevant button. Poof, they’re gone. Mighty No 9 keeps the ability set more narrow, but requires players to think about their approach in that distinctly 90’s fashion.

It’s a year late, probably not as vast as some expected, and missed a couple of important stretch goals (I see no online multiplayer time trials here), but the game itself is a solid entry in a time when Kickstarted games are beginning to lose their lustre. If you happened to miss the original funding campaign but your youth was spent hopping from platform to platform and praying that you found an extra life power up soon, then you’ll likely be overjoyed with the end product. Non-backers expecting a sweet and cuddly platformer should beware – this game is the Ramsay Snow of the platforming lanscape and you may find yourself it’s Theon Greyjoy, being tortured by its repetitive often hugely unfair games.