Miele’s comprehensive washing machine range is “premium” from start to finish, making the £720 Miele WDA200 something approaching entry-level. This 7kg machine has a maximum 1400rpm spin speed and a handy Automatic Plus program that adjusts water, wash process and spin automatically for mixed loads. There’s also a 20-minute Express wash included for when you’re in a hurry, and there are Delay Start and Rinse Hold options for when you’re not.

The main selling point, however, is the comprehensive five-year parts and labour warranty – an additional three years on Miele’s standard two-year guarantee. It’s somewhat similar to the cheaper WDA100, which comes with a standard warranty, though the WDA200 has a better official energy rating. 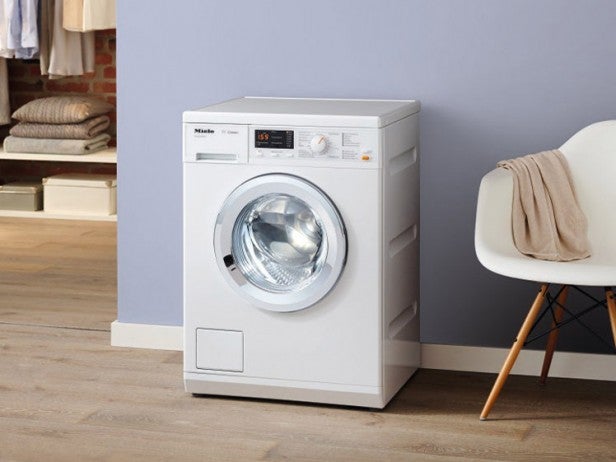 The WDA200 is part of the Miele’s Classic range and this shows in the look and feel of the machine. Its fascia has a single large and solid-feeling knob plus a handful of buttons – a setup that should be familiar to anyone. The basic display acts as a simple time-remaining counter with illuminated yellow LEDs to indicate your chosen spin speed and any of the three selectable options – short cycle, pre-wash and soak.

On the right side of the panel you get a vertical strip of indicator lights to let you know what the machine is up to at any point and some check lights to indicate if something is amiss with your plumbing – all helpful indicators. 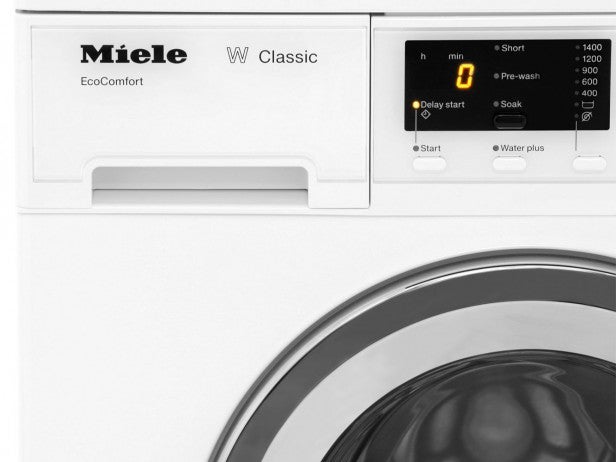 The door is typically Miele – it closes with a solid clunk and opens smoothly on a hinge that looks like it could last until the end of time. On the inside is Miele’s honeycomb drum, with its inner surface shaped into small raised hexagons. This is said to cushion the clothes by retaining a thin film of water during the wash cycle and is gentler on your garments at full spin. We’ve also found that this shape helps stop smaller items, such as socks, going missing, having stuck to the drum after a spin.

The soap dispenser drawer and lower flap with access to the pump filter are absolutely standard fare, although once again the build quality suggests that neither item is likely to fail for at least a decade or two. Operation is just as straightforward. Simply load your washing, soap and softener, pick a program on the rotary dial, select any options and press start.

For those who think touchscreen displays, internet connections, multi-layer menus and jaunty jingles should stay on smartphones, the WDA200 will tick all the right boxes.

As befits a premium model washing machine, the energy label claims for noise output are suitably low at 77dB on spin and just 54dB while washing. Miele makes much of the fact that the drum is suspended internally on automotive-quality shock absorbers and features a heavy cast steel weight (rather than concrete). Both of these reduce overall noise output, although the door is single-glazed, which will mean water sploshing noises might be prevalent through the wash cycle.

Having tested a number of Miele appliances, it was of very little surprise that the noise claims were almost spot-on. At maximum 1400rpm spin we measured 76dB, not much above the volume you might have your kitchen radio, and on wash the WDA200 peaked at just 56dB. As anticipated, water noises probably bumped that up the 2dB above the stated noise level. As 56dB is well below the sound level of normal speech, the WDA200 is unlikely to disturb any kitchen coffee morning conversations. 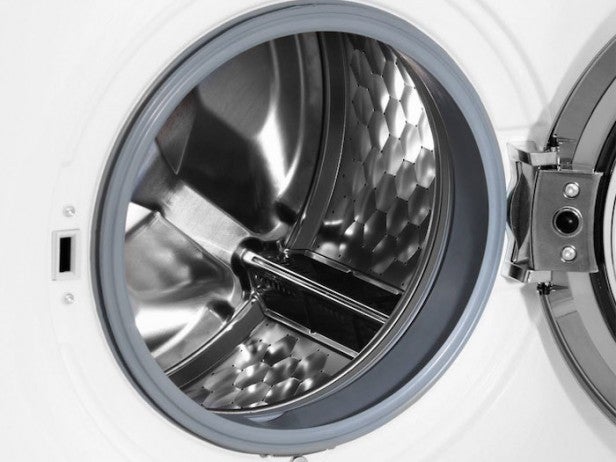 Miele WDA200 – What programs does it have?

Not counting the separate rinse and drain cycles, the WDA200 offers just eight programs – albeit with a range of temperatures and spin speed options for each. While that number is relatively low by modern standards, how many do you actually need? Most people have one main cycle they stick to with a couple of others for special occasions, so do the WDA200’s offerings meet your requirements?

The headline program is the Automatic Plus cycle. This is not quite a full sensor wash that measures the levels of dirt in the water and guestimates the type of fabric, but it does offer automatic water consumption, wash action and spin speed depending largely on load weight. The maximum load for the Automatic Plus option is 5kg. The standard Cotton wash will be ideal or those looking to max out the 7kg cleaning capacity.

For half loads or less, the Minimum Iron program reduces spin speed to reduce creasing at the end of the cycle, while the Woollens, Shirts and Delicates programs are limited to a 2kg load but offer specific wash cycles and gentle care depending on the program. A Denim wash is ideal for darker mixed fibres. For those in a hurry there is a 20-minute Express 20 wash.

Many of the programs have temperature variants that are selected on the main dial and a number of options can be included by pressing the relevant button before starting. These include a short wash, which reduces the wash time of all programs (except Automatic Plus) for when you have very lightly soiled washing, and there two modes for really mucky loads. These are a Pre-Wash to remove dirt, dust and grit before the main cleaning and Soak for heavily stained clothes, such as muddy and grass-stained football kit. The soak cycle time is adjustable between 30 minutes and two hours.

Finally, you can select Delay Start to perhaps make the most of cheaper night-time electricity, Rinse Hold to reduce creasing if you’re washing while you’re out, or a Water Plus feature that uses extra water to wash and rinse. This ensures a deep clean and removal of all traces of detergent for those with sensitive skin, and is a useful option for washing baby clothes. 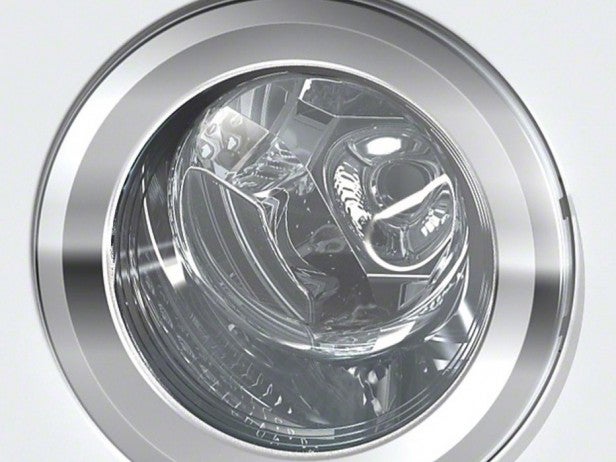 We ran the WDA200 with three loads. An 80% (5.6kg) dirty load on Cottons 40 degrees C with a test strip also in the wash, and two half loads (40% or 2.8kg). The first of these we again used the Cottons program at 40 degrees – the UK’s most frequently used cycle – and the second was the Automatic Plus mode, which defaults to a 1200rpm spin. The 80% and 40% loads best represent how most people fill their washing machines and the test strip was stained with our usual combination of coffee, blood, red wine, juice, ketchup and dirty engine oil. We loaded the WDA200 with a leading brand of non-biological detergent for each wash.

Predictably, Miele’s quoted figures for electricity, water and time taken were all very accurate across all three programs. The full load Cottons wash came in at 2hrs 33mins, just 4 minutes longer than stated, using 1.15kWh of electricity (at a cost of about 17p) and just over 69 litres of water. These figures are almost the textbook standard for an A+++ rated machine, although Miele’s more affluent models use even less.

The 1400rpm spin did a reasonable job of removing moisture from the load, with just over 2kg of water, or 37% of weight of load, left in the wash when we took it out. But that outstanding by current standards as most mid-budget 1400 spin machine will manage around 35%, with top-end 1600rpm models dipping well below 30% – Miele’s own WMR 560 WPS holds our spin-efficiency record at 24%.

Our test stain strip before (above) and after

However, there was nothing so-so about the wash performance, which is excellent. As can be seen from the test stain strip, there is nothing left to see of the five common stains and even the biro-written labels have been cleaned off. The engine oil remains, but even that has been reduced significantly. This is another outstanding wash performance from Miele, particularly as we use a cool 40-degree test wash and non-bio powder. Go hotter and biological for really tough cleaning duties and the WDA200 won’t disappoint.

Our two half-load washes were consistent and proved the efficacy of the Automatic Plus load sensing. While Miele down plays this feature a little, perhaps so it does not undermine full sensor features further up the range, the Automatic Plus program correctly identified that we were washing a smaller, mostly clean load and reduced the electricity and time taken by more than half. Washing a half load on the Cottons program used more than three-quarters of the power of a full load, so if you are going to wash smaller loads you are generally best waiting until you have enough washing to properly stuff the drum to capacity. 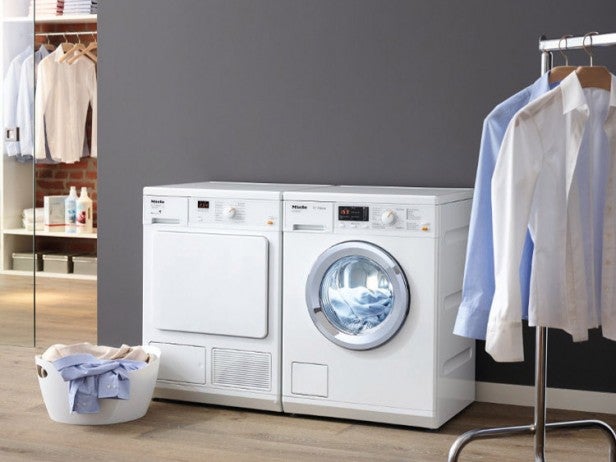 The consumption figures for the standard and half load washes read like an EU guide to A energy consumption and water consumption is even better than A+++ according to our tests. The 17p main wash electricity cost and 13p half load will add up to energy running costs below £40 a year, but extensive use of Miele frugal Automatic Plus mode for small to medium loads (up to 5kg) could deliver significant savings over the life of the machine.

Water consumption is very good at below 16 cubic metres using our test regime as a guide. For buyers on metered water paying approximately £1.50 per cubic metre, that would be around £22.50 a year. Costs for wastewater vary dramatically across the UK, but for many regions this would double the water costs, adding up to larger bills than for the electricity over a year. As the WDA200 is fairly frugal with its water consumption, it would be a good choice for buyers in high-rate water area.

Should I buy the Miele WDA200?

The WDA200 brings much of Miele’s high-end engineering expertise to a more affordable price level by reducing the features and program count. The porthole opening is rather small and the spin results were only average, but this model has outstanding wash performance and low running costs, particularly for water.

The most obvious alternative is the Samsung WW80H7410EW, with greater efficiency, higher capacity and equally excellent washing performance but at a cost that’s £100 lower. It’s an excellent option and has a more modern exterior, but the Miele’s 5-year parts and labour warranty shouldn’t be ignored.

For that reason, and the WDA200’s all-round good performance, it’s a great choice, particularly if you want peace of mind for the future.

An excellent washing machine with a generous 5-year warranty to back it up. It’s not perfect, but it’s still very good indeed.