What is the Miele DG6010 ContourLine?

Using steam to cook usually means choosing between the variable temperatures of a tabletop steamer, a microwave accessory or a more powerful and efficient built-in model. However, the Miele DG6010 creates another option – the precision of a built-in steam oven without the fuss of integration.

Find enough space for it on your worktop and you’ll have the large capacity for steaming food in its trio of stainless-steel containers, with all the plug-and-play convenience of a small appliance. As well as offering enough room to cook a whole meal, the DG6010 can also be used for a variety of other culinary tasks, from proving dough and making jam or yoghurt to defrosting, reheating and sterilising. 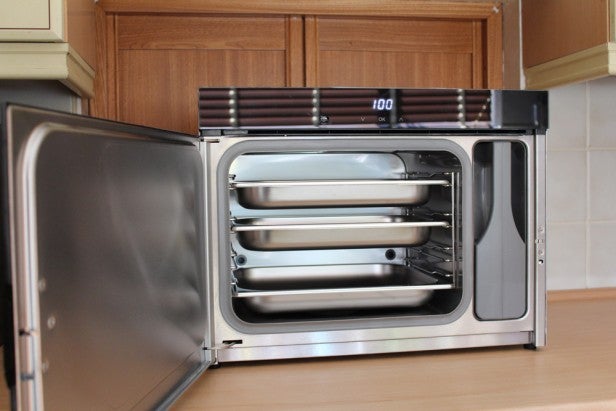 Black-glass-fronted and with a simplicity of design that makes it incredibly covetable, the DG6010 oozes elegance. The only features that interrupt its glossy fascia are a concave power button, a set of minimal touch controls and a flush-fitted handle to open the door.

Inside, a pair of detachable rails provides the option of four shelf positions for its three cooking trays (additional trays can be purchased separately) while to the right, a removable water tank means there’s no need for plumbing in – just fill and go. It’ll cook for around 90 minutes on a full tank. 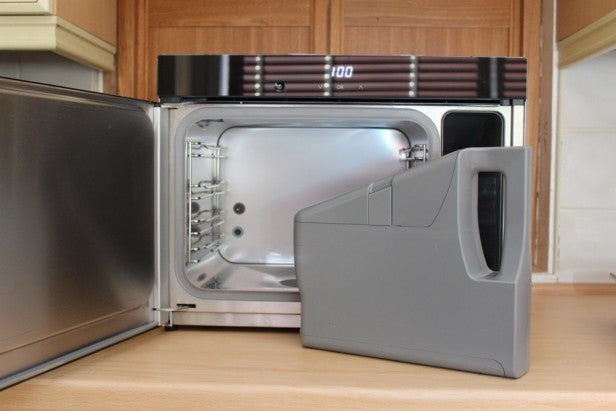 Its controls are exceptionally intuitive and comprise Up, Down and OK keys for selecting a temperature in 5C intervals (ranging from 40 to 100C) and a time in minutes, up to nine hours, 59 minutes. The timer doesn’t begin counting down until the steam temperature reaches the desired setting, so there’s no risk of over- or under-cooking, and it’ll also let you know if there’s not enough water in the tank to cook so it’ll never boil dry.

What’s particularly clever is that the steam is generated in the water container outside of the oven cavity before being pumped in through an inlet, so it’ll always be the temperature you choose when it starts to cook. This also means it can heat up faster and cooks evenly, no matter how much food is inside.

With no fitting required, setting up the oven is straightforward – after running it with steam to clean it (which is also how it can be cleaned after use), it was ready to cook.

We started by steaming chunks of butternut squash in the perforated containers to make soup – an adaptation of a recipe in the included book. After layering the pieces evenly in the containers, we put them in the oven and set it for eight minutes at 100C. As the oven heated up, some steam came out of the vents at the top, but once it had reached 100C the steam plumes stopped.

It beeped to say it had reached temperature and the timer started to count down. The cooked squash was soft enough to blend but not soggy or overcooked.

Next, we added chopped onion, butter and garlic to a tray and set it cooking for 4 minutes. This sweated the onion in its own juices, so that the cooked ingredients were as translucent as if they’d been heated in a pan. Once blended together with orange zest and juice, cream and stock, we used the oven at 95C to heat the soup to serving temperature. 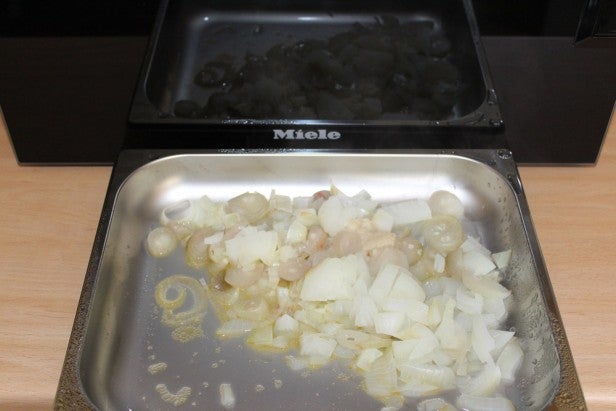 Following this, we assembled kebabs with chunks of chicken and pepper on skewers. Each perforated tray fitted two, and they were cooked at 100C for 8 minutes. Not only were the kebabs moist and thoroughly cooked on removal, but we later used the oven to reheat them at the same temperature for a few minutes and the chicken stayed tender rather than becoming dry and tough.

We finished by making cauliflower soufflé. Placing florets of cauliflower into a perforated tray, we steamed them for 14 minutes at 100C. Once cooked, the cauliflower was soft enough to purée, to which we added egg yolks and nutmeg. After folding in beaten egg whites, we placed the mixture into ramekins and cooked in the oven for 15 minutes at 90C. The soufflés rose well and while they lost a little height as they cooled, they were light and fluffy. 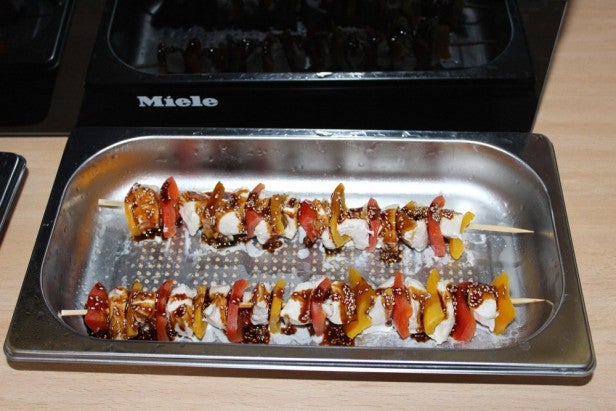 All the trays are dishwasher-safe, meaning clean-up was simple, and all the oven needed was a wipe down and the door left ajar to dry off. 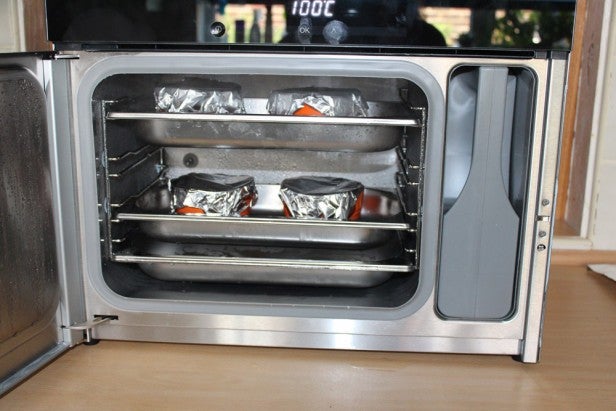 Should I buy the Miele DG6010 ContourLine?

When building in a steam oven isn’t an option (e.g. in rented properties or if you’re planning to move), this freestanding oven is the next best thing. It’ll do almost everything a built-in model will, with the added convenience of being able to be located wherever you want it.

While it won’t brown food, its applications number more than you might think and its capacity is generous, meaning it could easily take on the bulk of your daily cooking tasks. There’s no flavour transfer between different foods cooked at the same time and no chance of burning – ideal for novice cooks and anyone looking to eat more healthily.

A great way to get into steaming or take it to the next level, the Miele DG6010 is a pricey investment buy, but one that could change how you cook forever.