The Miele CM6300 is a bean-to-cup coffee machine designed to get you virtually any coffee drink, milky or otherwise, with zero fuss and no need for any know-how or technique. It’s pretty smart.

So smart in fact, that you end up feeling quite abstracted from the process of making coffee. You may choose the drink, but the Miele CM6300 is the boss.

For those after coffee with the least effort possible, it’s great. But like most bean-to-cup machines, it’s probably not for the purist crowd. And it’s certainly not for budget buyers either, weighing in at £1300. 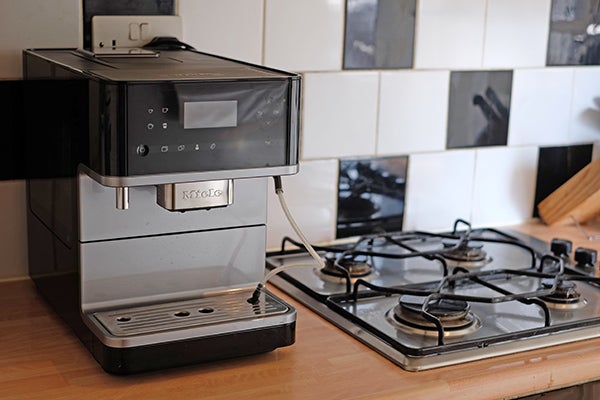 Miele is a brand with a fair bit of style cache. It belongs as much in lifestyle magazines as here on TrustedReviews. However, the Miele CM6300 design comes across as more practical and functional than beautiful.

Its edges are carefully curved, but the sheer amount of stuff needed under the hood makes this one of the largest coffee machines we’ve reviewed to date. Front-on it doesn’t look too large, but it’s extremely deep.

Make sure you consider what the Miele CM6300 will look like on your kitchen top before buying, or you may get a nasty shock. It’s 43cm deep, if you have a tape measure handy. 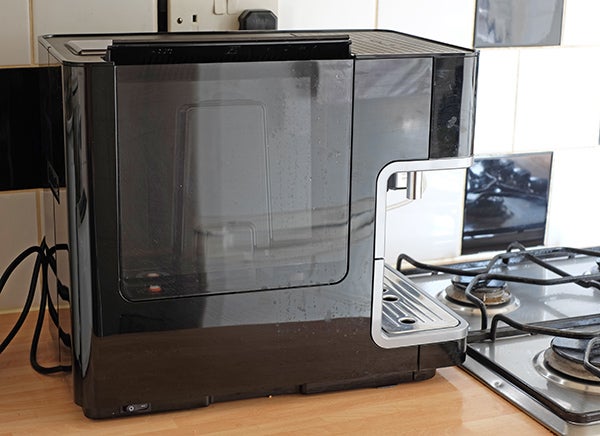 For its grand size, it doesn’t actually fit in a milk unit, though. The milk container is a stainless steel thermos-style thing you bung in the fridge when not in use.

This is only separate because for the Miele CM6300 to fit in its own milk refrigeration would make the machine even bigger and more expensive. All the milk ‘processing’ still happens inside. 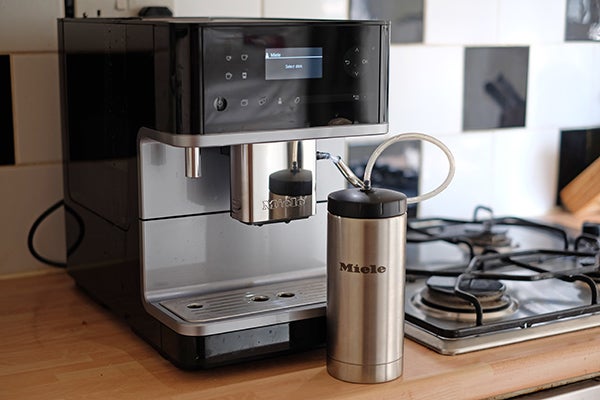 It’s otherwise designed for as much simplicity and flexibility as possible. The coffee spout moves up and down, letting you use as tiny or as large a mug/cup as you like, and while you simply select a drink from either the menu system or the preset buttons on the front, you can thoroughly calibrate each drink’s style.

When, for example, selecting the size of drink you want, the Miele CM6300 runs through the cycle so that instead of estimating you can see what suits your favourite mug. You can pick the strength too, and the temperature.

Bean-to-cup machines tend to keep your manual interaction on a day-to-day basis to a minimum, but that doesn’t mean you can’t tailor the results fairly carefully. 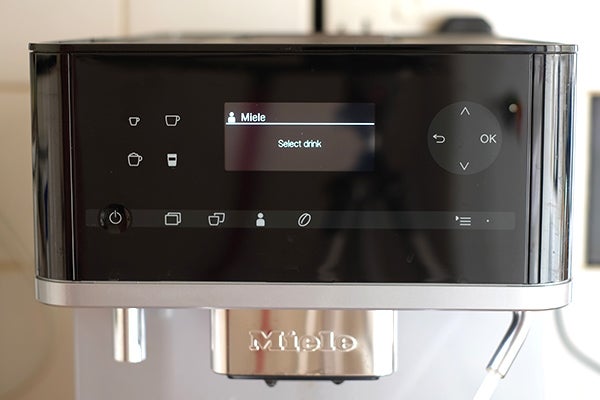 The Miele CM6300 is the smartest coffee machine we’ve reviewed to date. It doesn’t do anything outright flashy, but its seemingly huge array of extra sensors mean you can approach it in a completely brainless fashion.

Weight sensors under the refuse tray and the water reservoir mean the CM6300 flashes up warnings on the screen when it needs a refill. With other machines you either have to keep an eye on the level or just wait until it starts making strange sounds, telling you it’s not happy. 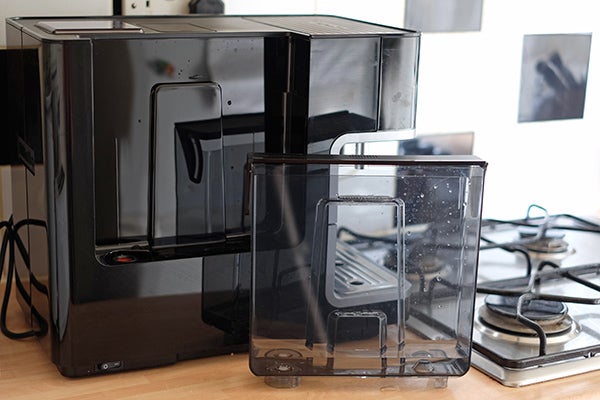 The same happens with maintenance. It tells you to clean the various pipes at regular-ish intervals, which may come as a reminder how few of us actually maintain our machines properly. And it rinses itself. All the time. Is it annoying? A little, but if you’re not going to treat your coffee machine properly, you probably shouldn’t spend £1300 on it.

Filling up and maintaining the Miele CM6300 couldn’t be any easier, either. The 1.8L reservoir sits along the left side of the machine, and can be yanked out pretty easily. However, it also has a tilt-up lid that means you can fill it up right where it sits.

The bean chute is just as simple. There’s a rubber-lined plastic cover for freshness, but take it off and you can simply pour the beans in. If you’re down to emergency ground rations there’s a secondary slot that takes one cup’s worth, but the CM6300 is really not designed for people looking to use pre-ground coffee regularly. 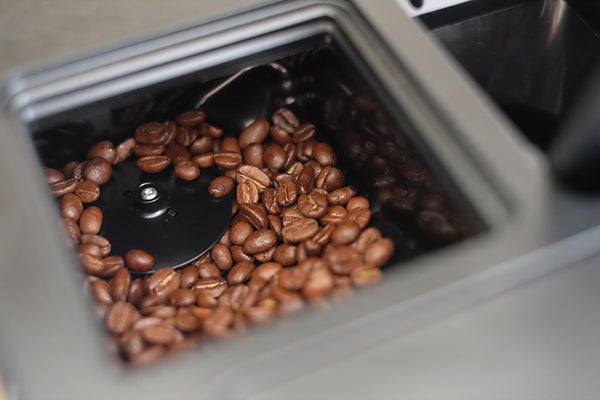 The grinder lives inside the Miele CM6300, unseen but not unheard. It grinds beans down separately for each drink (all the bean-to-cup machines we’ve tried do, mind), taking 15-20 seconds in this grinding part of the process. It seems to grind one coffee’s worth in advance, judging by advice in the machine’s manual.

One-touch operation is the raison d’être of bean-to-cup machines like this, and sure enough there are ‘shortcut’ buttons on the front that let you make espressos, cappuccinos and latte macchiatos. Other drinks are accessed in the menu, skewing it towards these popular presets, but each other drink is only a couple of presses away. 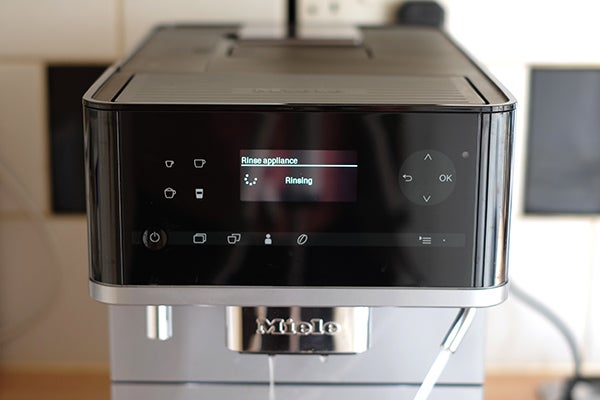 These extra drinks include latte and long coffee – at present there’s no flat white preset. As everyone has different tastes, the CM6300 also has profiles, meaning everyone in the family can have their own particular blend of latte.

You can ‘freestyle’ too. The main coffee arm also outputs heated milk and milk froth on command, while a secondary spout to the left can fire out hot water to top up drinks and create americanos. As it’s so willing to separate the milk and hot water elements of the coffee-making process, the Miele CM6300 can also produce pretty fantastic hot chocolate drinks, or pretty much any other hot drink, come to think of it. Bovril, anyone?

We also came to appreciate the milk thermos. Like the rest of the Miele CM6300, it requires pretty much zero thought. A milk pipe plumbs into the side of the machine, and into the top of the milk thermos. You just yank it out and place the tube in a tailor-made hole in the drip tray when you’re not using it, and the CM6300 manages the rest. 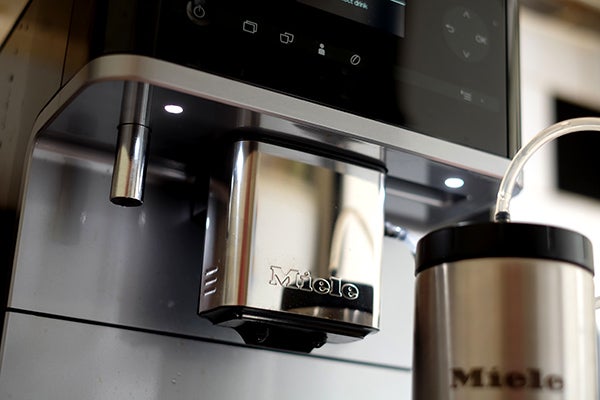 The Miele CM6300 is not going to teach you much about how these drinks are actually made, but it certainly makes things easy. There’s also a very nice little hardware extra in the Miele CM6300 – LEDs light up the drip tray area, meaning it can more-or-less be operated in the dark. We’re not sure why you would, but it also makes it a bit easier to keep an eye on your drink.

There’s a cup warmer up top as well. It’s the grey rubbery area to the front of the Miele CM6300 top plate. For energy-saving reasons it’s turned off as standard. Unlike some cheaper coffee machines, it doesn’t seem to simply use the heat of the water boiling element to power it. Everything in this machine is deliberate. 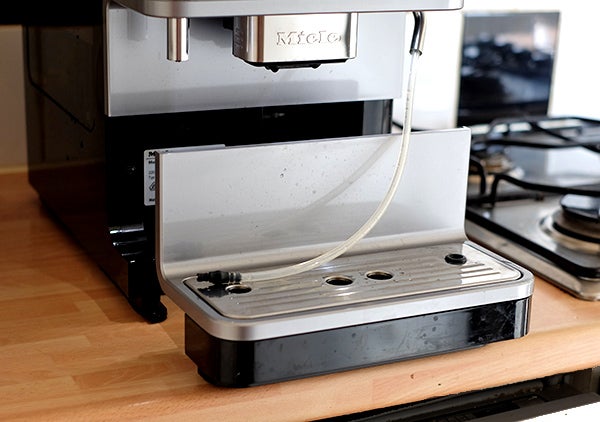 It’s also relatively slow, though. That deliberation seeps through into its operation. As everything is controlled electronically, you don’t get the direct control or quick coffee of a manual espresso machine. It requires some patience, and the extent to which it rinses itself constantly means the drip tray needs to be tended to very regularly. There’s no saying no to the Miele CM6300’s demands for maintenance, either. It can get quite HAL-9000 when it wants to.

In other words, you get simplicity, but not speed.

The results are pretty much uniformly great, though. You will want/need to customise the various Miele CM6300 drinks presets you use, especially the milky ones, although we found that just as often as not we reverted to the more ‘manual’ approach, adding the espresso shots, hot water and treated milk separately.

Then again, if you’re going to do that you’re really missing the point of a bean-to-cup machine. 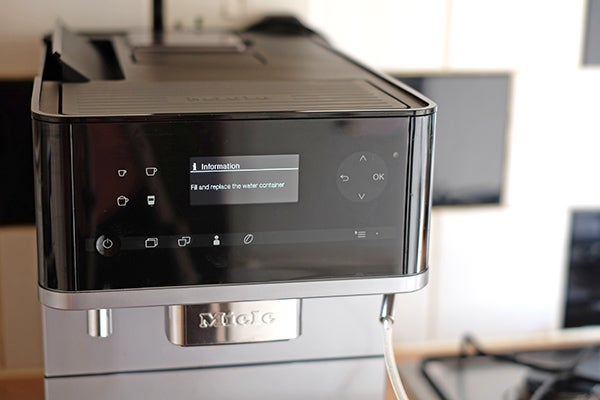 When optimised, the coffee is rich, not too bitter and only thin-tasting if you get the distribution of coffee/water wrong. The crema will naturally depend a little on the beans you use, and we found that while the amount and the texture of the creme with our test blend were perfect, it was a little paler than we’d like.

You can fiddle with the coarseness of the grinder, which can affect the crema quality significantly, but it’s not done through the menu system. Instead you need to pull off the side of the Miele CM6300 and fiddle with a manual switch. It’s one part of the system that isn’t controlled by the otherwise all-seeing brain, and is therefore kept under wraps. 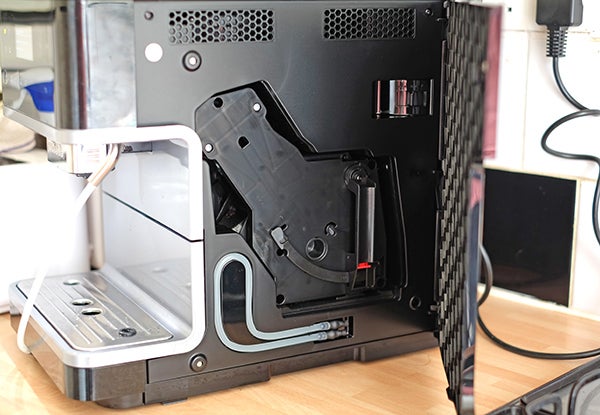 Other than that, we can’t imagine many taking issue with the Miele MC6300’s coffee. It’s excellent, and we were particularly pleased with the consistency of the machine’s milk output.

While it produces hot milk and milk froth faster than it does coffee, the milk froth setting demands none of the finesse and know-how you need to avoid ending up with a cup of foam with a manual espresso machine milk frother. 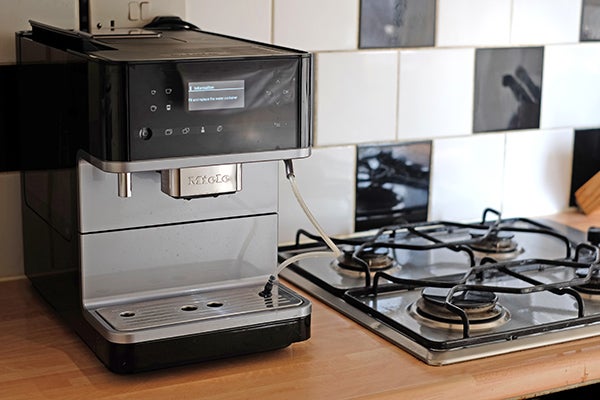 If we had any issues with the Miele CM6300’s coffee, it’d be very bad news. From that point of view, this is a terrific machine that really does give you the sort of quality consistent with the high street chains. As much stick as Starbucks may get, that is not meant as an insult.

However, you need to consider whether you’ll get on with the way the machine operates. Especially given the lofty £1300 price.

It’s not all that fast, and its machine-led approach to maintenance can be irritating on those groggy mornings when all you want is a cup of coffee without having demands made of you by either a virtual teacher or bleating baby, depending on how you look at it.

You may also want to consider the lower-end Miele bean-to-cup models. The Miele CM6100 lacks a cup warmer and the fancy milk flask, but as it costs a whopping £300 less while packing in the same most important elements we’d be seriously tempted to downgrade to that lesser model. Paying the extra seems outright painful when in £100 machines a cup warmer is treated as a natural byproduct of the water heating. But perhaps that’s just what happens when you get really fancy in coffee machine land.

An intelligent coffee machine that produces fantastic coffee, but requires some patience at times.