The problem with a lot of steering wheel reviews is that they’re written by people who don’t know the first thing about driving. I despair when I read reviews that complain about wheels which don’t “shake” enough when crashing, or “pull” enough when trying to pile around a corner with your foot down. Unfortunately most of these reviewers have no idea of how a car should feel when piling into bend too fast, and would probably find themselves smashing into a gravel trap with a fist full of under-steer at the first corner in the real world. But as a result of this lack of understanding, a great many force feedback steering wheels lack any sense of realism in favour of artificially tugging, shaking and jarring the driver just to prove their force feedback credentials. I was therefore very pleased to find that Microsoft had not tried to please the driving ignoramus and instead had produced a steering wheel for the true driving enthusiast. 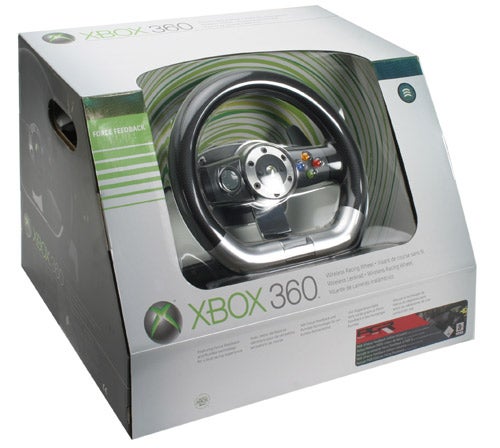 To be honest though, it’s probably not the realism and feel of this wheel that will attract buyers, it’s the fact that it’s wireless. Now, anyone who’s already got an Xbox 360 Premium Pack will be aware of the joys of wireless control. The X360 wireless controller is a real triumph and means that you can leave the controller on your coffee table and just pick it up and play without worrying about a cable dangerously draped across your living room. This steering wheel employs the same concept and uses the same wireless technology to communicate with the console, but it’s not what I’d call a true wireless controller. 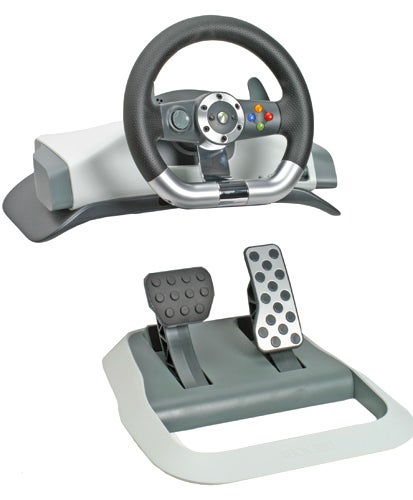 The reason that I’d find it hard to label this wheel as truly wireless is that it still employs cables. The lesser of the two cables links the wheel to the pedal box, and to be fair, this isn’t much of a problem at all. But the second cable plugs the wheel into a mains supply, to enable the force feedback to operate. You therefore need to have a power socket somewhere near your sofa. If you’re lucky you’ll have a socket behind your sofa so you can keep the power supply plugged in and hide the cabling under the couch when the wheel is not in use.

So, we’re not talking about a completely wireless solution here, but what you are losing is a trailing cable running across the length of your living room, which is pretty commendable in my book. I’ve lost count of the amount of times that myself, my wife or numerous friends have tripped over the AV or controller cables from older consoles. 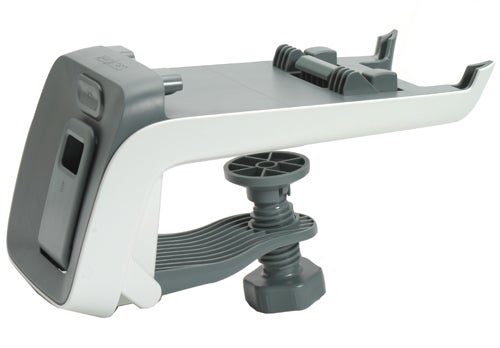 As well as offering wireless connectivity to the console, this wheel is also very well built and easy to setup. Anyone who’s had to clamp a steering wheel to a desk will lament having to tighten up screws to the point of breaking, just to make sure that the wheel doesn’t move about mid race. But Microsoft’s table clamp is a masterpiece of design and function. For a start, the clamp is separate to the wheel itself, allowing you to easily clip the wheel in and out, while leaving the clamp attached to the table. Also, despite the fact that there is still a degree of screw twisting involved, there’s also a pressure clamp located at the front – you tighten the screw as far as possible without breaking your fingers, then just engage the pressure clamp. The result is a very solid connection to your table or desk, without a hint of movement, no matter how ham fisted you are around the Nordschleife!


Don’t despair if you don’t have a desk or table to clamp the wheel to though, since it has also been designed to be used on your lap. The base of the steering wheel unit is wide and rounded at the sides so that it fits over your lap comfortably. Obviously having the wheel on your lap detracts from the realism – it’s too low down for a start and if you get a little overexcited it’s all too easy to move the whole unit around. That said, it’s still completely usable on your lap, which is more than can be said for a lot of other wheels. 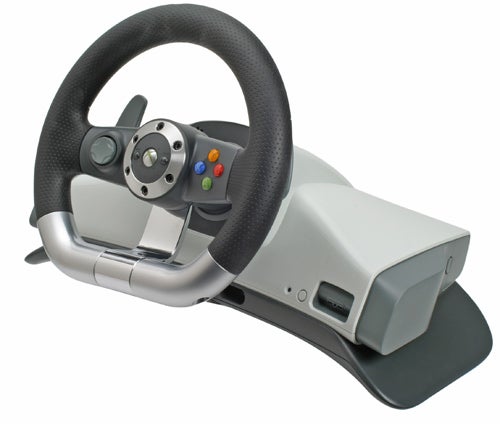 The wheel itself looks and feels great. Two thirds of the wheel is covered in a tactile rubberised finish, while the bottom third is finished in brushed aluminium. The bottom of the wheel is also flat, just like it would be in a real racing car. Obviously this is a bit of a gimmick, since you’re not having to squeeze into a tight cockpit as you would in a real racing car, but that hasn’t stopped VW and Audi putting flat bottomed wheels in the Golf GTi, TT and RS4!

The wheel is a three spoke design, with the two horizontal spokes housing all the controller buttons and the D-pad. Behind the wheel are two large paddles for changing gear – these work superbly and make it far easier to drive with a manual gearbox. There’s a battery pack at the right hand side for wireless communication, while there’s also a headset connector so you can chat to your competitors while racing. 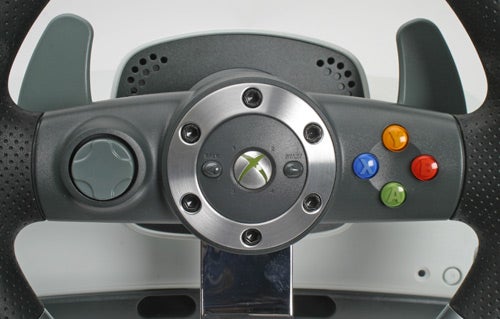 The final part of the puzzle is the pedal box, which has the same high quality look and feel as the rest of the ensemble. The throttle pedal is very large, while the brake pedal is mounted quite high, making the setup ideal for heel and toe aficionados. Of course with a lack of clutch, you could just left foot brake, but if you’re used to heel and toeing on your change downs, you’ll probably just use the one foot like me. The advantage of the single foot technique is that you can also keep the pedal box steady with your left foot – not that it tends to slide around too much anyway, but keeping it planted with your left foot means that it won’t slide away no matter how overexcited you get. 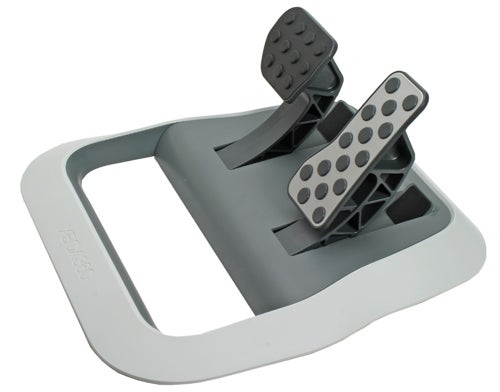 Now, when you first plug in the wheel and start playing your favourite driving game be prepared for some initial frustration. In fact switching from using the controller to a steering wheel is not easy, and you’ll probably find yourself underestimating the amount of lock needed for bends and then overcompensating disastrously. But if you persevere you’ll soon realise that the subtle control that the wheel affords you is superb. Lift off the power just enough to get the back out, apply copious amounts of opposite lock and get back on the power, while remembering to unwind the lock as you exit the bend of course! 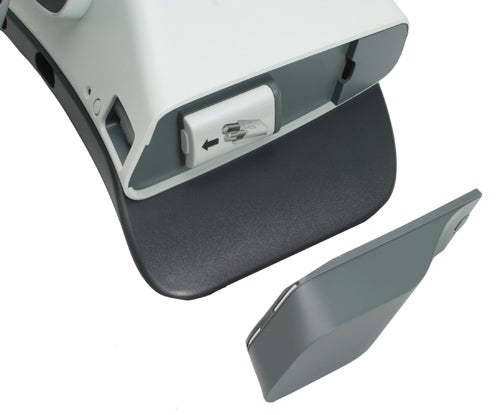 This wheel provides the perfect amount of feedback. It doesn’t go overboard with the shaking and shuddering, but does go light or fight against you exactly when it should. But most impressive is the feedback that you get from the road surface – obviously this is going to be dependant on the game you’re playing, but with both Project Gotham Racing 3 and Need for Speed: Carbon, the wheel accurately conveyed changes in road surface and camber. The feedback is subtle, but if you’re used to driving a car with good steering feel you’ll instantly feel at home with this wheel.

I’m sure that some people will insist that they can still get around a track faster using the standard controller, and they’re probably right. But for me flicking a thumb stick from side to side is just nowhere near as immersive as gripping a steering wheel – just like driving a real car, to drive fast using this wheel requires practice and skill, but the eventual experience is worth all the hard work. At the end of the day, cars come equipped with steering wheels, not gamepads, and it’s just a lot more fun playing a driving game with a wheel. 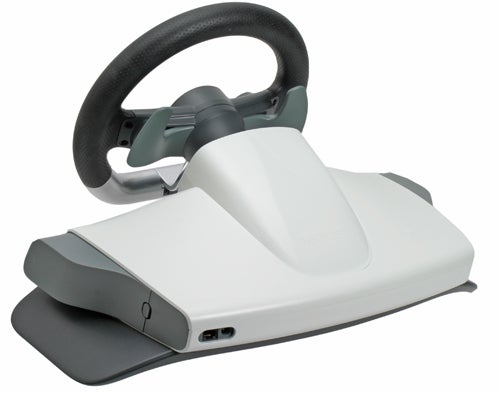 The major downside of this wheel is that it doesn’t come cheap. At just under £80 online, you’re going to have to be a real driving game fan to put your hand in your pocket for this wheel, no matter how good it is. You do get PGR3 bundled in the box, but it’s unlikely that any driving game enthusiast wouldn’t already have it in their collection. So, the question is whether it’s worth the money, and I’m inclined to think that it is, especially with Forza Motorsport 2 just around the corner! 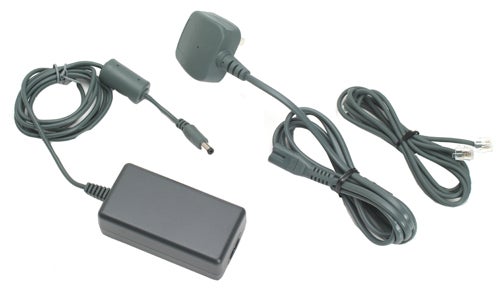 
Although it’s not as wireless as its name would suggest, this wheel still offers a distinct lack of cables draping from your console to your sofa. Add to this superb design and build quality, coupled with the best force feedback action I’ve felt and you’ve got a great virtual driver’s tool. If you’re serious about driving games and are already counting down the days to the release of Forza 2, you should seriously consider one of these.