Like many people who are quite happy keeping the inferior headphones bundled with their iPod, there are also a large amount who will never use a keyboard and mouse other than the ones that came with their PC. This is fine in some cases, as occasionally they tend to be rather good, but that is the exception rather than the rule. Together with your monitor, they’re how you interact with your PC, and are vital to your ergonomic comfort – which surely makes them worth spending a little extra on. And if you’re upgrading anyway, why not go for wireless?


While Microsoft might not be innovating as much with their desktop peripherals as its biggest competitor (Logitech, in case you were wondering), its 2.4GHz Wireless Laser Desktop 7000 we’re looking at today is proof it can still put together a classy bit of kit. Not to be confused with the Microsoft Wireless Entertainment Desktop 7000, which had a mini-trackpad and ‘mouse’ buttons on its keyboard, this set is for desktop use pure and simple. 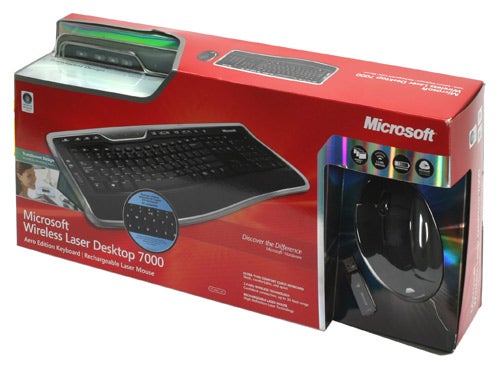 First, a very minor gripe is Microsoft’s packaging, which though attractive seems to get more intricate and complicated with every iteration. To offset this we have the usual excellent full-colour quick-start guide, and of course it’s the hardware that matters, where it has to be said that initial impressions are very favourable indeed. Starting off with the Laser Mouse 7000 (available separately), its shape is identical to Microsoft’s previous Laser Mouse 6000, which is no bad thing since that was quite a comfy critter. If you read my review of the 6000, you’ll know all about the ergonomics of this newer mouse, since the shape, feel, buttons and wheel are all virtually the same. 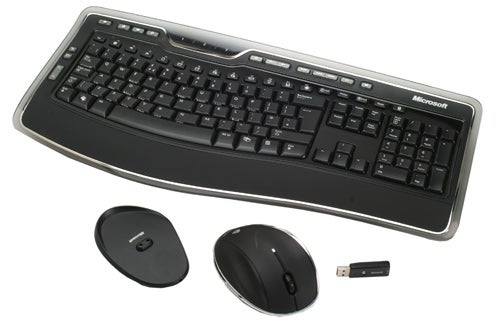 The one area where the 6000 had me unconvinced was in the looks department, and this is where the newer 7000 really makes an impact. Though the central and side sections are made from different materials, they’re the same matte black finish. This is beautifully offset by a curved chrome trim, the chrome Microsoft Laser logo, and amazingly, a tiny LED which also looks like solid metal when not lit up green. 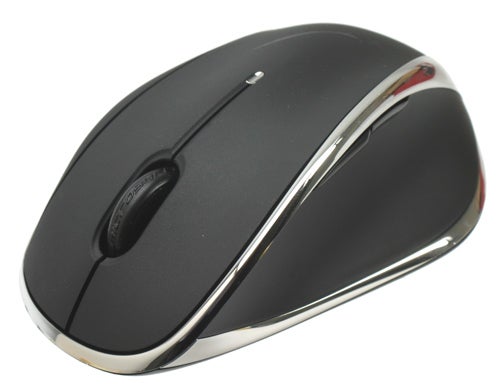 The biggest difference between the 7000 and its lower-numeral sibling is that this mouse comes with its own charging station. Now for those of you who, like me, who don’t like perishable, non-replaceable batteries, I’ve some good news: this rodent uses an actual NiMH AAA battery, rated at 1000mAh. This is far preferable to integrated Lithium batteries, which tend to lose charge-capacity over time before finally dying. But there are more advantages: you can keep a spare AAA battery around for when you forget to place your mouse in its cradle, and you can even use the 7000 as a portable mouse (though lacking the dongle-slot of the 6000, you’ll need to make sure you don’t lose the little stick).

Though a full initial charge will apparently take up to seven hours, you can start using the mouse after only one, which provided me with a solid day of use after a weekend of standby – very impressive. Being rechargeable, the bottom of this mouse is the other area that has changed most from the 6000. First there’s an on/off switch and wireless signal button. Then we have the battery hatch, which is easy to open and close, and two power contact points that resemble a miniature continental plug. 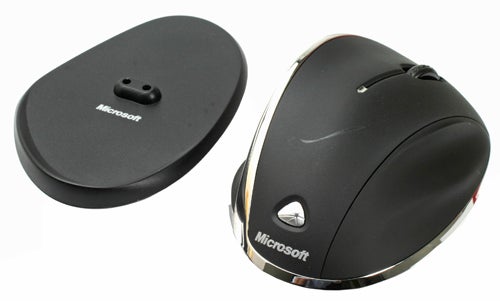 These, of course, plug into the charging station, which again is very stylish. It’s solidly constructed, has very broad rubber feet, and is contoured to match the base of the mouse so that the only visual ‘blemish’ is the power cable. The power contact points work brilliantly in that you’re never left wondering whether you inserted the mouse so that it is charging properly, like with many upright models, but though you’re not in doubt ”when” it happens, it can be a tad fiddly to get the mouse seated in the first place.


My main regret with the charging system is that you cannot plug a charging cable directly into the mouse. This is something I’ve come across before on Trust mice, and is probably the smoothest solution for when you forget to charge it. Sure, you’re momentarily back to using a wired mouse, but at least you have a working one without needing a spare battery. 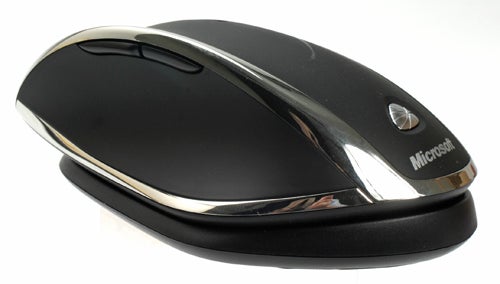 Still, the mouse is only half the story. Unlike the mouse, the Microsoft Wireless Laser Keyboard 7000 is exclusive to this desktop combo and matches the former for stylish looks. Its main feature in this department is what Microsoft claims to be ‘design inspired by Windows Aero’. To be honest, it reminds me more of the Samsung SyncMaster T200 – not because the 7000 keyboard displays touches of red, but because it has a transparent outer bezel with a hint of black turning it from clear on the outer edge to smoky moving further in.


Three large and touch sensitive ‘favourites’ keys are integrated flawlessly into the transparent outer surround, with all the disadvantages this entails, as this is another implementation where the ‘buttons’ require very firm and deliberate pressure before they’ll work. These and the bezel they’re set in is separated from the main keyboard by a thin chrome ridge to match that found on the mouse. 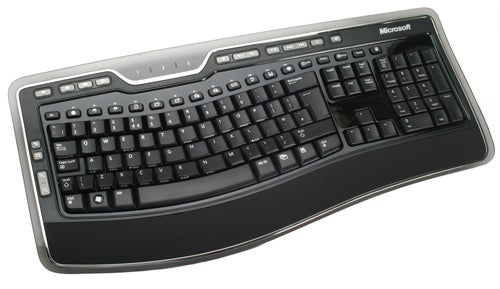 Next we have an inner surround in matte but smooth black plastic, in which pearly-grey media keys are nestled. I guess they’re meant to match the outer bezel, but this is probably the one thing about the 7000 Desktop I found slightly unattractive. There’s a basic but nice selection, including volume controls, media keys and internet along the top, and zoom along the left side.

The final, inner finish around the numerical pad, Function and QWERTY keys is glossy piano black. This is the most sensible place to have a finger-print inviting layer, as you’re unlikely to touch it much. Keys themselves are matte, and the integrated wrist-rest is finished in the same comfortable, rubberized material as the sides of the mouse.


Overall, it’s a classy, coordinated look, but do its ergonomics match its great design? The typing layout is rather unusual, in a good way. Those who hate the two separate, angled sections on some of Microsoft’s Natural Ergonomic Keyboards will be pleased by the “comfort curve” design, which unifies the letters into a single whole while still angling them slightly at six degrees. If you’re used to a normal layout, this will take some getting used to.

A bit like going to the gym, it feels like effort at first, as your fingers stretch to locations they’re not used to. But like exercising, it gets easier, and when it does, your experience is more comfortable than ever before. Not only do your hands rest at a more natural angle, but typing improves. Touch-typing especially becomes easier for those who aren’t proficient at it, since keys have different shapes. Surprisingly, gaming is more comfortable too, and when playing with WASD it’s easier to use the shift-key. 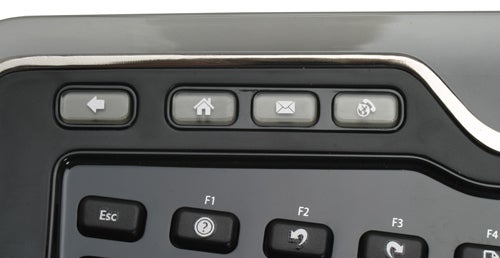 The tab and left shift keys are somewhat undersized, and thanks to the slightly diagonal orientation of the keys, I found myself initially pressing Caps Lock a few times by mistake. However, as with the overall layout, this is something that you get used to given a little time. The low-profile keys’ response, meanwhile, is excellent. Feedback is springy and defined without being noisy, though as with most keyboards the spacebar is rather audible. Whether you prefer the feel of this keyboard or one of the Logitechs like its Wave is really a matter of personal preference – I’d be perfectly happy with either. 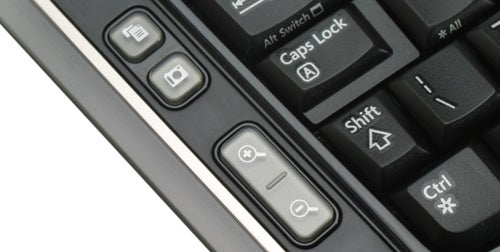 All of the Function keys double as office or operational shortcuts, with the keys themselves sporting the relevant icon while the F-number is printed above them in small but legible fonts. They’re curved to match the keys below them, which is aesthetically pleasing. Unfortunately they’re not grouped by four as on most keyboards, instead being evenly spaced, which makes it almost impossible to press the F-key you need without having to look first.


On the other hand, a nice touch for novices is that Microsoft has given the left Ctrl-key a little sunburst symbol, and has printed this together with the most common shortcuts on relevant keys. Not to disturb the actual letters, these handy ‘tips’ are printed on the side of the key that’s facing you; plainly visible without being intrusive. Last but not least – at least for some – there is a calculator shortcut above the number pad, though due to the lack of an LCD screen it is nowhere near as useful as its equivalent on the Logitech Cordless Desktop MX5500 Revolution.

Surprisingly for such a high-end Microsoft product, especially for something that is essentially a revision of an earlier model, is that without those feet (using the keyboard in ‘flat-profile’) there is a balancing issue: a tendency for the top-left corner to come up when putting any pressure on the wrist-rest. However, while it’s annoying and occasionally distracting, it’s not a deal-breaker.

Another oddity is that Microsoft has two separate applications for its mouse and keyboard that need to be individually started, unlike Logitech which offers full control from its single SetPoint panel. And while the Redmond company’s keyboard app will let you assign different functions to the shortcut and media keys, it is nowhere near as flexible as its competitor’s offering.

Perhaps the biggest challenge facing the Microsoft Wireless Laser Desktop 7000 is Logitech’s Cordless Desktop MX5500 Revolution, which can be had for only £20 more. If your budget cannot stretch the extra twenty, then the 7000 is unlikely to disappoint, as overall, it really is a lovely set. It’s just that the MX5500 offers more: its keyboard features a versatile LCD screen, and the MX Revolution mouse has the intelligent MicroGear Precision free-scrolling wheel we all love, with more attractive and flexible software backing the set up. The main things Microsoft has going for its contender, in addition to being cheaper, are the replaceable mouse battery, flexible keyboard positioning and (presumably) superior angled key-layout.


Standing on its own, the black and chrome Microsoft Wireless Laser Desktop 7000 is a very desirable piece of kit, and design-wise makes the perfect partner for those considering Samsung’s T-range monitors with its transparent outer surround.


Once you get used to the ergonomic layout the keyboard is eminently comfortable, and offers more adjustability than most. However, apart from using a replaceable AAA battery, the mouse is mostly inferior to the excellent Revolution model included in Logitech’s competing Cordless Desktop MX5500 Revolution. Which set you go for is a question of taste and budget, but when you’re already spending this much on a desktop set, the extra £20 for the Logitech seems worthwhile.