Some months ago gadget blogs were wowed by the announcement of a new top-of-the-range keyboard from Microsoft that offered features such as cool back-light with proximity sensor, an integrated USB hub, and a dock to charge the bundled mouse at the same time. Well this isn’t it. Despite appearing on the Microsoft site some months ago the Wireless Entertainment Desktop 8000 is not actually arriving till September. In the mean time then, we’ve got its more modest but still rather spectacular flash – the Wireless Entertainment Desktop 7000. This package contains keyboard and mouse which are, to give them their rather wordy titles, a Desktop Entertainment 7000 keyboard and a Wireless Laser Mouse 8000. 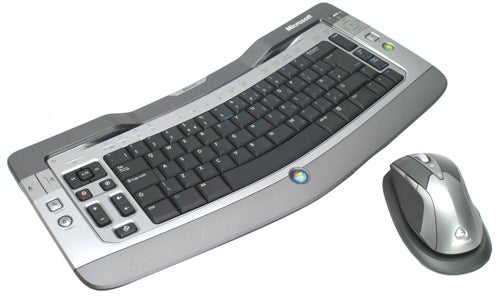 The set is uses Bluetooth and a small USB dongle is included. The keyboard and mouse work as soon as you plug in the dongle but to get the most out of them you’ll definitely want to install the Intellipoint software. If you have Logitech software already installed the software will make you uninstall it first to avoid conflicts.

The keyboard and mouse together look every inch like modern sleek input device, with curves, angles and two tone colours. The keyboard has a slightly V-shaped design and ultra thin profile which Microsoft calls ‘Comfort Curve’ and ‘Quiet Keys’, the latter presumably because the less the keys have to travel the less clacking type noise they make. The edge drops down at the top centre of the keyboard though that appears just to be purely for design reasons.


I was surprised to find that it doesn’t even have small drop down legs to raise it up at an angle but this didn’t actually cause a problem and it was quite comfortable to type on. As far as I know this is the first curved keyboard to have flat keys, so if you’re a fan of those crazy split keyboards but also like notebook style keys, this could be your perfect keyboard. It lacks a number pad though, so accountants won’t like it. 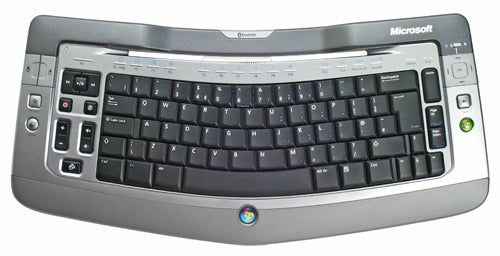 It clearly designed with Windows Vista in mind, but it does work in Windows XP too. Microsoft has removed the Windows key from the left of the Space Bar and moved it to a dedicated plastic raised button beneath it that mimics the look of the new circular ‘Start’ button in Vista. It looks good and can be easily reached with the thumb so you don’t have to take your fingers off the keys. As the cursor then defaults to new Search box you can just press this and type to launch your application. It’s quite slick.


There’s another dedicated key with the Windows logo on the right – green instead of blue. This is designed to launch Windows Media Center, which is now included in most versions of Windows Vista. 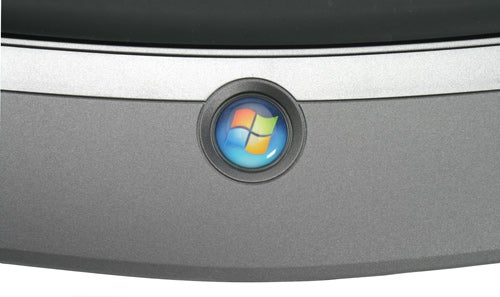 As well as these dedicated keys there are numerous other shortcut keys. Just to the left of the keys is an array of Media Center buttons – Play/Pause and Skip forward and back. The Channel and Volume buttons are up an up and down affair and above these is a button for starting a recording and for mute. The relevant ones also work in Media Player. At the bottom is a Windows Live button that launches Windows Live Messenger, though this has to be installed as an extra on Windows Vista and XP. 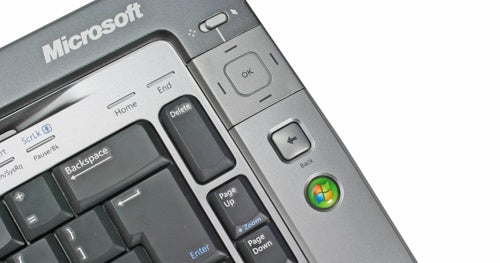 Rather than bringing up the standard Messenger contacts list it puts a box on top from where you can type in the name of the contact you want rather than having to use the mouse. If you want to move the cursor, you don’t have to actually use the one bundled. The keyboard actually has a touch sensitive area at the top right, that works like a mini-trackpad, where the cursor responds to the stroke of your thumb. It’s not perfect but once you get used to it, it’s a lot easier to be accurate than it is with the nib on the previous Microsoft Media Center keyboard I looked at. It works best if you pick the keyboard up and control the cursor with your right thumb while there are left and right mouse buttons on the left – easy to do because the keyboard is so thin and light. An ingenious addition is that a slider switch above the mini trackpad converts it into a four-way directional pad, with an OK button the centre for making selections. This does the same job as the arrow keys and Enter button, but makes it easier to control from a distance.


Beneath the mouse button on the far left are a Magnifier, which might be useful for seeing text on a low res screen at a distance, and a Gadgets button, though all this seems to do is launch the Vista Sidebar if it’s not already running, which seems like a perfectly good waste of a button to me. 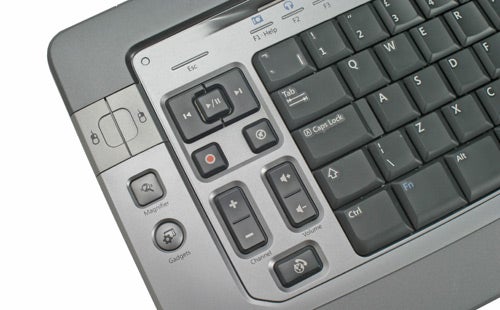 Perhaps the most distinctive feature of the keyboard are the F-keys. Rather than physical buttons these are just touch sensitive bumps. The five in the middle can be assigned to favourites, which is handy.


As for the keyboard itself it took me some time to get used to the curve but once settled I found it very comfortable. The Home and End keys have been morphed into touch sensitive buttons, leaving the delete key all on its own and elongated, which actually makes it pretty easy to get too. One oddity though is the Battery Status Indicator. It’s mentioned on the web site and indeed pictured on the box – except it’s not actually there. Where there should be a row of small lights, there’s nothing. Is this some sort of PS3 type loss of functionality for the European market thing? The keyboard actually takes four AA batteries, and doesn’t have a recharge cradle, so you’ll have to take the batteries out to replace – which is a pain, and means you’ll need replacements on standby. 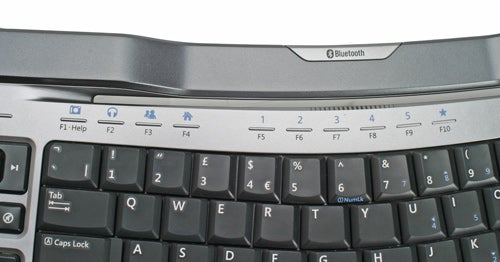 As for the mouse, its colouring makes it a perfect match for the keyboard. It’s symmetrical making it left-hander friendly, which is something I appreciated. However, ergonomically I found it not as comfortable as my Logitech MX610 or the wired Razor mouse I use at home. It’s a bit too high in the centre and I felt that bit less in control. It’s still decent though. 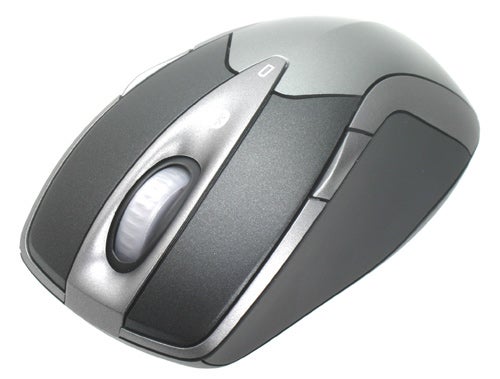 While there isn’t a battery status indicator on the keyboard, there is one on the mouse, which flashes when the power is low. It glows when charging, and a very cool charge pad is included; you just place the mouse flat on the pad, rather than the more fiddly upright position some chargers need. The two main mouse button run all the way down the front of the mouse, but the strips under the fingers are relatively thin, making it harder to press than my normal mouse. There are two other buttons – one will fall under the thumb, while the other will have to be pressed with the inside of the middle finger.


The scroll wheel is large and fat, mostly to allow for the ‘tilt-wheel’ functionality, which means that you can use it to scroll sideways, as well as up and down. It felt quite odd to me. By default the central button is mapped to a feature of the Intellipoint software called ‘Instant Viewer’ – this is essentially similar to the Expose feature of MacOS X, which arranges your open windows and apps on screen so you can quickly switch to what you want. Why this is part of the mouse software and not part of Vista by default is beyond me. It’s better than the wizzy but not that helpful Flip3D feature in Vista and means that you have to get a Microsoft mouse to get it. 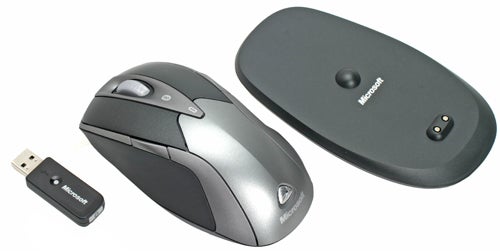 All in all though then this is a very nice set. It’s not necessarily the best mouse of the best keyboard I’ve ever used but it’s a great package, that looks fantastic and has loads of features. I really did find the shortcut keys useful. It makes the most sense if you’re running Vista, and even more if you have make use of Media Center. It’s a shame though that the batteries on the keyboard need charging separately, especially when the mouse is replenished so conveniently.


The Wireless Entertainment Desktop 7000 is is well built, littered with useful shortcut keys and dedicated buttons. The thin laptop style keys have a good feel and the lack of charger for the keyboard is a shame, but as cool looking, sleek cordless mouse and keyboard setups go, this is going to please a lot of people, though it’s undoubtedly best suited for those running Windows Media Center.