Its model number might indicate that Microsoft’s Wireless Mouse 5000 sits somewhere between the cheaper 3000 and ‘top-of-the-line’ 8000 wireless mice. However, due to its use of the company’s new BlueTrack sensor technology, it actually has a significant advantage over its higher-numbered but older peers which use laser sensors, in that it will track across almost any surface.


Together with the Wireless Mobile Mouse 4000 and 6000, it is also one of the few rodents in Microsoft’s arsenal which are completely ambidextrous, so southpaws rejoice. 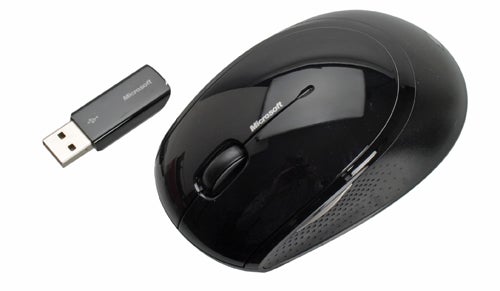 The 5000 is a nice-looking device, combining a piano-black top and base with rubberized, textured sides. We like the soft-touch part, but though it looks good the glossy finish picks up fingerprints far too readily – kind of a problem for a device you’re constantly touching. Note to all manufacturers: do not use glossy plastics in fingerprint-sensitive areas!


We’ve yet to come across a symmetrical mouse that’s as comfortable as one sculpted to fit a specific paw, but nevertheless the 5000 lies nicely enough in the hand. Because of its low profile and gentle slope it doesn’t quite give enough support to your palm – especially after extended use you’ll notice the difference between this and a dedicated, contoured right-hander like Logitech’s MX1100 or even Microsoft’s own Laser Mouse 6000. However, even after lengthy sessions the 5000 doesn’t cause actual discomfort. 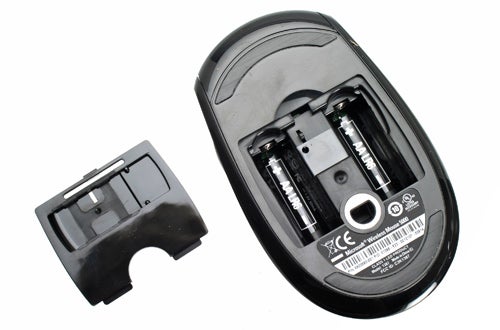 Microsoft’s ambidextrous design also affects the button-layout. It’s still a five-button mouse, but rather than the usual two thumb buttons on the left, here we have a single button on each side. This has advantages and disadvantages over the traditional layout: it’s more difficult to press whichever button happens to be under your little finger rather than thumb, but at the same time there’s no chance of pressing the wrong one, which can be fatal after having just spent ages filling out an online form or during a gaming session.


On the topic of gaming, the BlueTrack Mouse 5000 is not going to be any gamer’s weapon of choice. Quite aside from the ergonomic disadvantage, the scroll wheel doesn’t offer notched feedback; an essential feature for any serious fragger. It’s a choice Microsoft seems to be implementing on all of its non-gaming mice and though it does make scrolling through documents more effortless, it precludes casual gamers from getting the best experience. 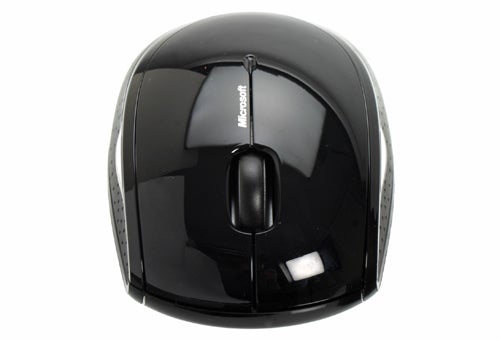 Aside from this the only issue we have with the soft-touch four-way scroll wheel is that it doesn’t feel particularly sturdy. In fact, when pushing the wheel left or right using just the rubber middle section, it comes away from the thin grey plastic sides, which isn’t exactly reassuring. At least its action is smooth, with both sideways-presses and clicks being nice and crisp. Likewise the rest of the mouse’s buttons offer positive feedback, but then that’s no less than you would expect from one of the biggest players and pioneers in the mouse market.

Thankfully eschewing Bluetooth, Microsoft’s 5000 utilises 2.4GHz RF for excellent reception within a range of around nine metres. The accompanying transceiver is nice and sleek, though it is quite large compared to the miniature dongles found on both Logitech’s and Microsoft’s own notebook mice. 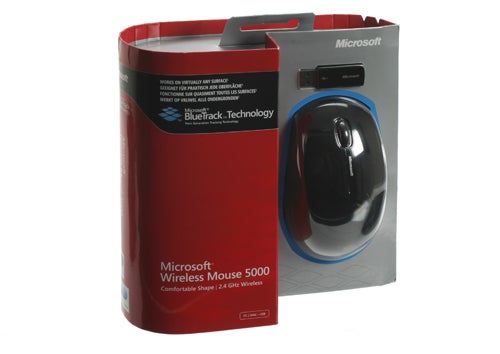 As with most of the company’s desktop mice, including the recent Explorer, the transceiver can be easily slotted into the mouse’s base. Unfortunately the recess is quite shallow meaning the dongle protrudes from the base, but at least it’s held in securely thanks to rubber grips.


Inserting the dongle also automatically switches off the mouse, saving the twin AA batteries – though with Microsoft claiming up to eight months from a pair it’s not a great concern, especially since you can use rechargeable ones. As usual there’s a small green LED below the scroll wheel to warn you when they need replacing.

Last but not least, how does the sensor perform? As we discovered when we looked at the Explorer Mouse, the answer to that question is: very well indeed. On surfaces like your desk or cloth you wouldn’t notice any difference between it and laser, but getting onto more challenging things like marble, thick carpet or even bark, BlueTrack lets you work where no mouse has worked before. It’s still stumped by glass or highly reflective objects, but everything else ought to be navigable. 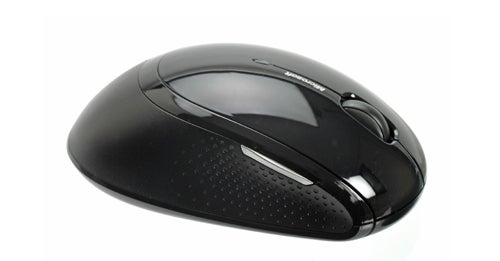 So what will left-handed owners of marble countertops have to pay to take the 5000 home? How does £23 sound? Affordable as that is, we really do only recommend this mouse unreservedly if you are left-handed or use it on unusual surfaces. Otherwise both of the big players have more comfortable previous-generation laser rodents available, especially if you’re willing to spend a little more. Logitech’s amazing 1100MX, for example, offers superior ergonomics, finish, scrolling and build quality, a three-part battery-indicator, adjustable dpi and more buttons, all for around £33.


In the Wireless BlueTrack Mouse 5000, Microsoft has created a reasonably attractive and fairly comfortable ambidextrous mouse which offers class-leading BlueTrack sensor performance at an excellent price. For south-paws and those who mouse on unusual surfaces it’s a bargain, but thanks to a few ergonomic failings everyone else might wish to check out other mice first.