Changes
to the desktop UI are less obvious, but they do arguably contain the
most hyped change in Windows 8.1: the return of the Start button. That
said this isn’t a return to the much loved (by some) tree menu of past Windows
versions, but simply a shortcut back to the start screen. In fact, it
isn’t even that much of a shortcut since pressing the Windows key is
faster.

Still, it provides a point of reference for new migrants
and again should have been in from the start. Arguably this isn’t so
much a climb down from Microsoft as a reluctant concession: you can
have your Start button back, but it will still operate in the way we
want.

Of more substance are the reinvigorated Snap Views. Now
you can snap Modern UI apps and desktop software together in virtually
limitless combinations, though screen size will make more than three
fairly impractical on anything other than a large desktop monitor. This
still doesn’t represent the true Modern UI multitasking many crave, but
these virtual page breaks are a step in the right direction and
particularly useful for users with multi-monitor setups. 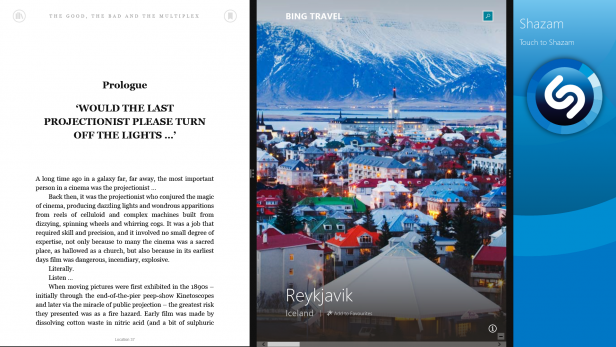 The
desktop is also home to arguably the best cheap trick in Windows 8.1:
the option to match desktop and Modern UI backgrounds. This is done via
right clicking the taskbar, going to properties, then navigation. It
sounds trite, but the optical illusion it creates when jumping between
desktop and Modern UI is easily the most powerful thing Microsoft has
done to unite the two platforms. It isn’t a fix, but it does make things
infinitely less jarring.

Taskbar properties are also where
users can choose to boot straight to the desktop. You still can’t avoid
the Modern UI entirely but you do get to spend more time in a desktop
which remains Windows 7 v2.0.

Then
again we’d argue spending time in the Modern UI is now genuinely useful
rather than what once seemed something of a party trick. And the
biggest reason for this is down to the overhauled search.

Start
typing in the Modern UI to automatically begin searches and you will
find Windows 8.1 now integrates both local and web search results.
Furthermore click on a popular result and you will find a beautiful,
horizontally scrolling results page that combines all results with
smart, dynamic data.

For example, our search for chameleon indie
rockers the Yeah Yeah Yeahs shows local results on the left, a
biography, links to top tracks within Xbox Music, illustrated
discography, video links and finally thumbnails of websites for popular
related websites. We also did this for the term ‘Paris’ which brings up
local files including personal photos via metadata, contacts, web images
and again thumbnails of popular related websites.

For purists
more interested in a list of search results this may grate, but for the
majority it is a beautifully put together interface that will likely do
more to convert users to Bing than all Microsoft’s previous efforts
combined. 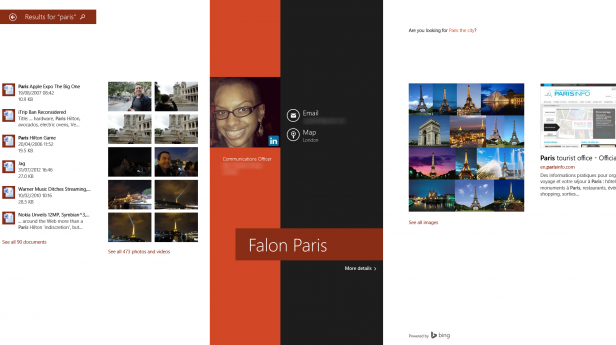 SkyDrive
also gets a major overhaul and it is now the backbone for Windows 8 with real benefits for users over rivals like Dropbox and Google
Drive. In Windows 8.1, SkyDrive automatically stores your ID information
and user preferences (like iCloud) to sync them across your devices.
Unlike its rivals SkyDrive on Windows 8.1 also won’t download every file
to your computer by default. Instead it keeps thumbnails and file
property information and downloads the files you need only as you need
them. Critical files and folders can be set to download for offline
viewing, but overall it is a clever way to save storage – especially for
tablet and Ultrabook owners with less capacious SSDs.

Internet
Explorer also gets some love in 8.1. Now hitting version 11 it brings
readability and offline reading modes to combat the likes of Instapaper
and Pocket. It can also now sync tabs across PCs, but not phones and
tablets like Chrome, Firefox and Safari. WebGL support is finally
brought in too for better browser-based gaming experiences. 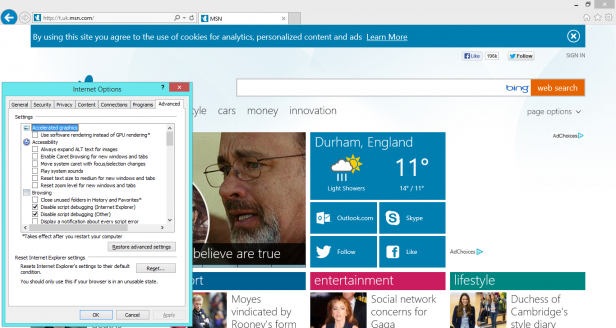 The
Modern UI edition of IE11 gets a visual refresh as well with improved
handling of multiple tabs, but infuriatingly it is only available to
users if they select IE as their default browser on the desktop. In our
opinion, for all its improvements, IE11 still lacks the extensions and
performance of its biggest rivals to make that deal a welcome trade-off.
Though for Windows RT users unable to use alternative browsers there is
no downside.

Microsoft’s $8.5bn 2011 deal to buy Skype
is also coming together with Windows 8.1. The Modern UI Skype app is
now installed by default and phone number detection in IE11 now
automatically roots to it. The app itself doesn’t work flawlessly (it
failed to pick up profile photos of many of my contacts, for example) but
it is good enough that installing Skype’s forever ugly desktop software
no longer feels a necessity. It is a glimpse of the future Microsoft
will no doubt hope to further with Windows 9 in 2015. 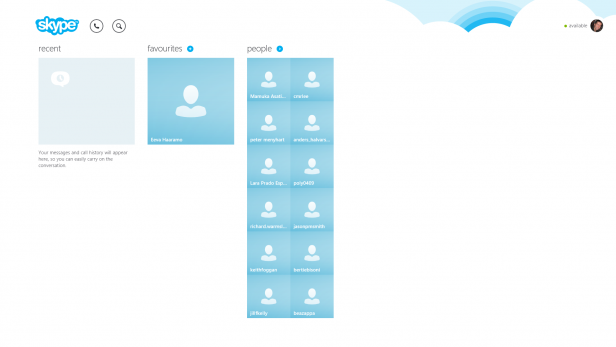 Strategically
interesting is the addition of Miracast support. The open alternative
to Apple’s AirPlay allows for full HD and lossless audio streaming to
devices using Miracast adaptors. Given Google adopted Miracast with the
Nexus 4, used it in Chromecast
then built support into Android 4.3, Microsoft’s move could well
confirm the standard as the next big thing. With Apple keeping AirPlay
all to itself this is much needed and we eagerly await third-party
peripherals and wider manufacturer support.

Lastly, Microsoft 8.1
brings support for 3D printers. You’ll still need their third party
software to access their full array of functionality, but in giving this
exciting category the same basic driver support that standard printers
have enjoyed for years it can only help a push into the mainstream.