Creative types will love the Microsoft Surface Studio 2, due in part to the fact you’re better able to zoom in, rotate and alter your work from every possible angle. The colour fidelity promised by the sRGB mode should also be a real plus. But that steep, steep price will likely put most off.

The Microsoft Surface Studio 2 all-in-one workstation is aimed at digital artists, videographers and marketers in the UK today – and the range starts at £3549.

That’s an eye-watering amount of money, but consider that, for your cash, you’re getting a complete system with built-in storage (either 1TB or 2TB), Nvidia GPU options (GTX 1060 or GTX 1070) to power your creative apps/get in a sly bit of Apex Legends on the side, not to mention a huge 28-inch 4500 x 3000 calibrated display which features three preset modes.

So yes, it’s big. Yes it’s going to set you back a fair bit. But this is a work device first and foremost, and an entertainment hub second. Ahead of a full review, I was invited to attend a media briefing session – here’s how I got on. 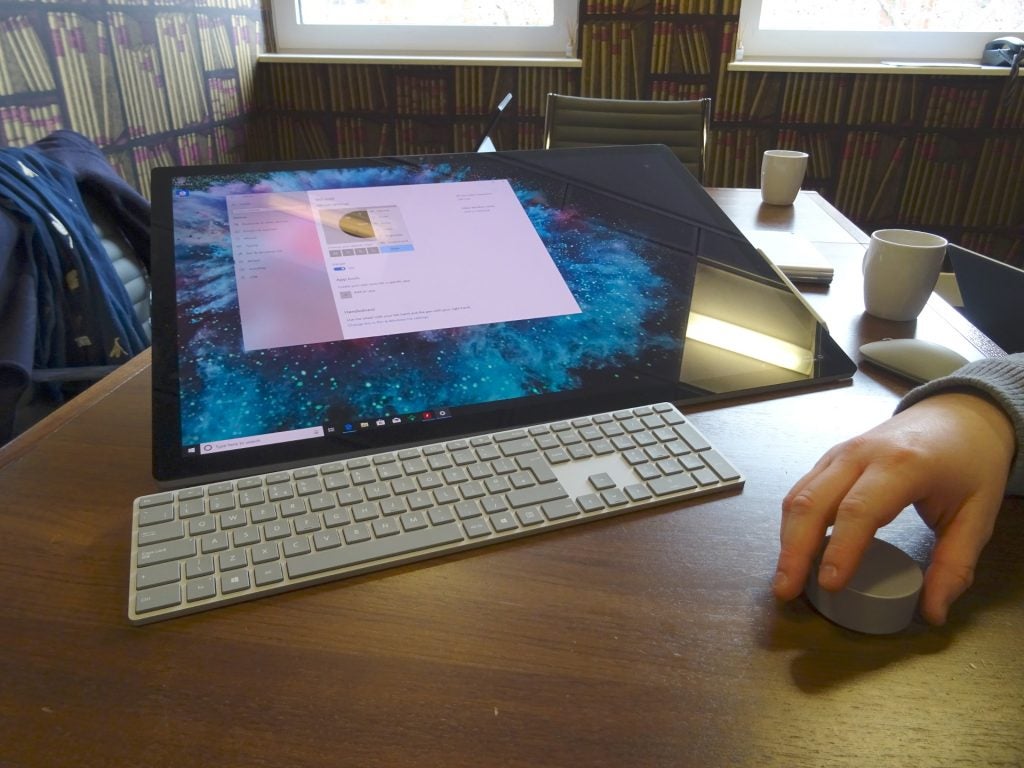 The Surface Studio 2 looks like a dream workstation for digital artists, playing nicely with the new Surface Pen and Surface Dial.

UK prices for all the iterations of the new Microsoft Surface Studio 2 are as follows:

The Microsoft Surface Studio 2 is available to buy directly from Microsoft now, or from John Lewis. 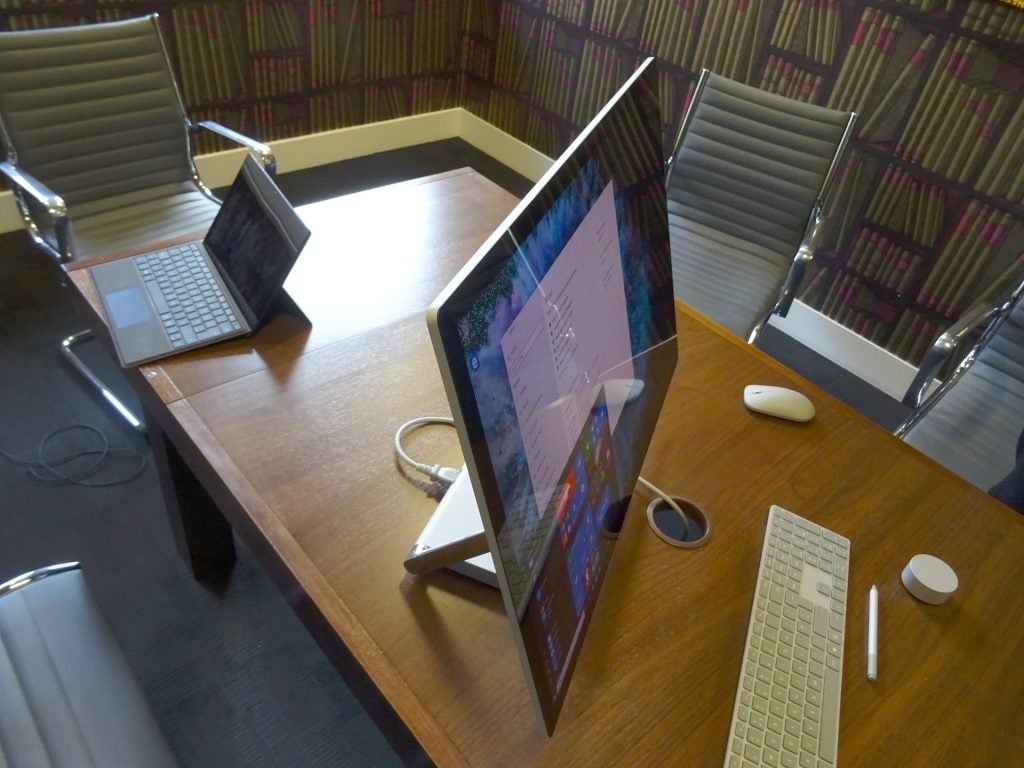 Measuring 12.5mm at the edges, the Surface Studio 2 is thinner than some laptops.

Like a lot of all-in-ones, the Surface Studio 2 resembles a typical PC monitor. That 28-inch touchscreen display is attached to a metal hinge which lets you fold the screen forwards, so you can use it as a digital draughting board, or prop it up so that it’s perpendicular to your desktop’s surface.

Microsoft personnel at the event weren’t able to tell us how many degrees of an arc you can move the Surface Studio 2 through; when it was pushed all the way back in ‘draughting board mode’, if you will, it looked  (to my untrained eye) to be at an angle of around 30 degrees to the desktop. I didn’t have my Helix Oxford Maths Set to hand, so I’m not able to verify that.

I can confirm you can pull the Surface Studio 2’s screen all the way up so that its 90 degrees to the desk surface, or ‘standard monitor mode’ which you’ll want to do if you’re editing video, or just generally using it as a typical PC. You can even tilt it a little closer towards you, should you want to eliminate any glare from overhead office lights.

Microsoft staff told us that the actual display had been ‘optically bonded’ to the glass cover, allowing for a super-thin air gap. This was described as a ‘1.5mm pixel-to-eyeball gap’, which means if you were to put your face right up against the glass, there’d be just 1.5mm of distance between your peepers and the pixels. 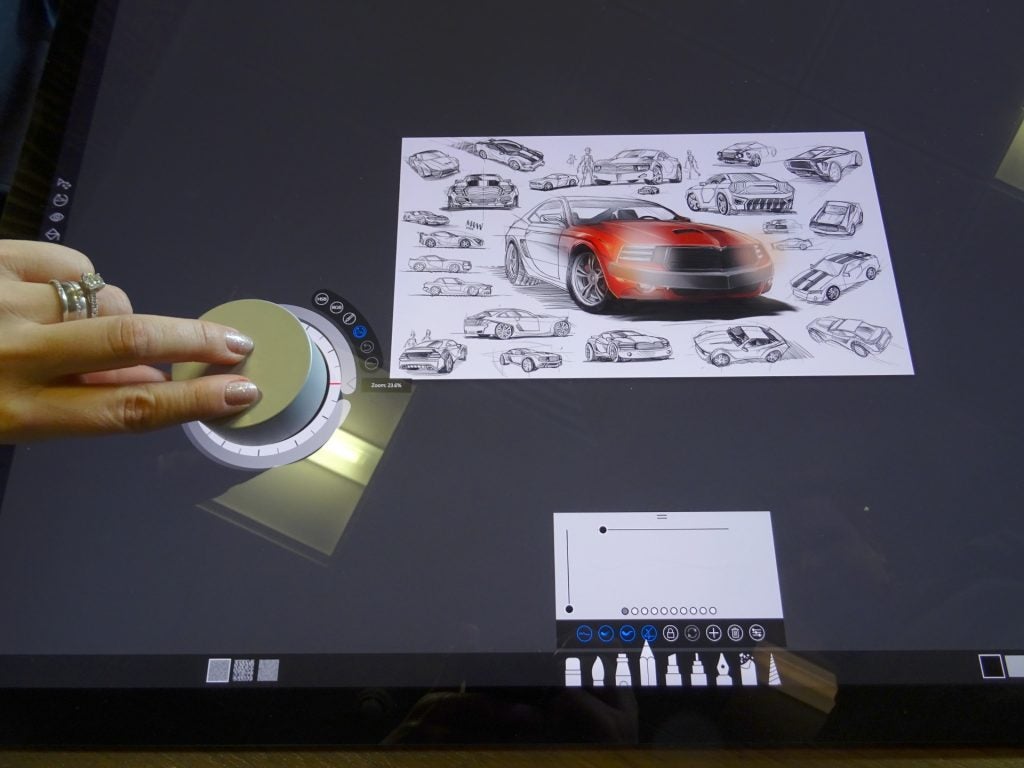 The sRGB video mode is designed to cater for people working on digital art, whether that’s posters, graphic novels, or any other kind of digital art projects you’d put together in Artrage, Affinity Designer or Sketchable. DCI-P3, meanwhile, is geared more towards people working on video projects in Premiere Pro.

We were unable to find out on the day if these video modes mean you cover 100% of the sRGB and DCI-P3 colour spaces – for the amount Microsoft’s asking, you’d hope so – but I was told that each Surface Studio 2’s screen is individually calibrated before they hit shelves, the idea being you should be able to start using it straight away and not have to do any calibration yourself.

The third video mode ‘Vivid’ doesn’t appear to be based on any standardised colour space. This mode is intended to be used by marketers, people creating visuals and presentations, boasting exaggerated colours and brightness rather than a more accurate image found with either the sRGB mode or DCI-P3. 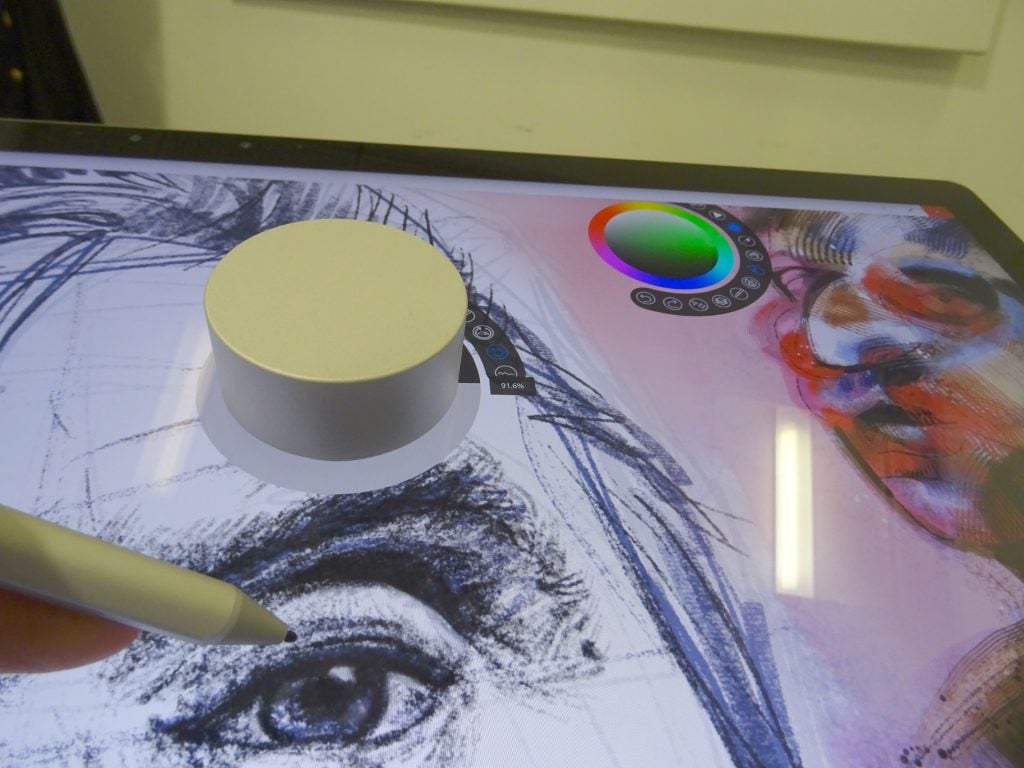 Freelance artist Phil Galloway produced a good sketch of Francis Bacon on the Surface Studio 2. I made it look like Tesco Value bacon.

This twistable, clickable hockey puck-like peripheral is designed to sit on your desktop and let you do things like zoom in to whatever you’re working on with greater precision than perhaps pinching to zoom would allow. It’ll also sit on top of the Surface Studio 2 itself, and call up thinks like colour palettes and other controls on programs like Sketchable.

While I’m no professional artist, I was able to mess around for a little bit on Sketchable, and had plenty of fun drawing moustaches on the sketch of Francis Bacon that freelance digital artist Phil Galloway had knocked up on the Surface Studio 2. There appeared to be no lag whatsoever – my motions were instantly replicated on the screen, whether I was making tiny scribbles or large, corner-to-corner big brushstrokes.

I did struggle a bit with the Dial which, even at the most acute angle I could push the Surface Studio 2 to, would still slide down the screen like a melting ice cube. Then again, you’re supposed to hold this down on the screen with your off hand, leaving your dominant hand free to draw, so this shouldn’t be an issue.

I did notice that there doesn’t appear to be a way to lock the screen into any one position, so for when you’re drawing, it seems to be the case that ‘as low as it can go’ is as good as you’re going to get. 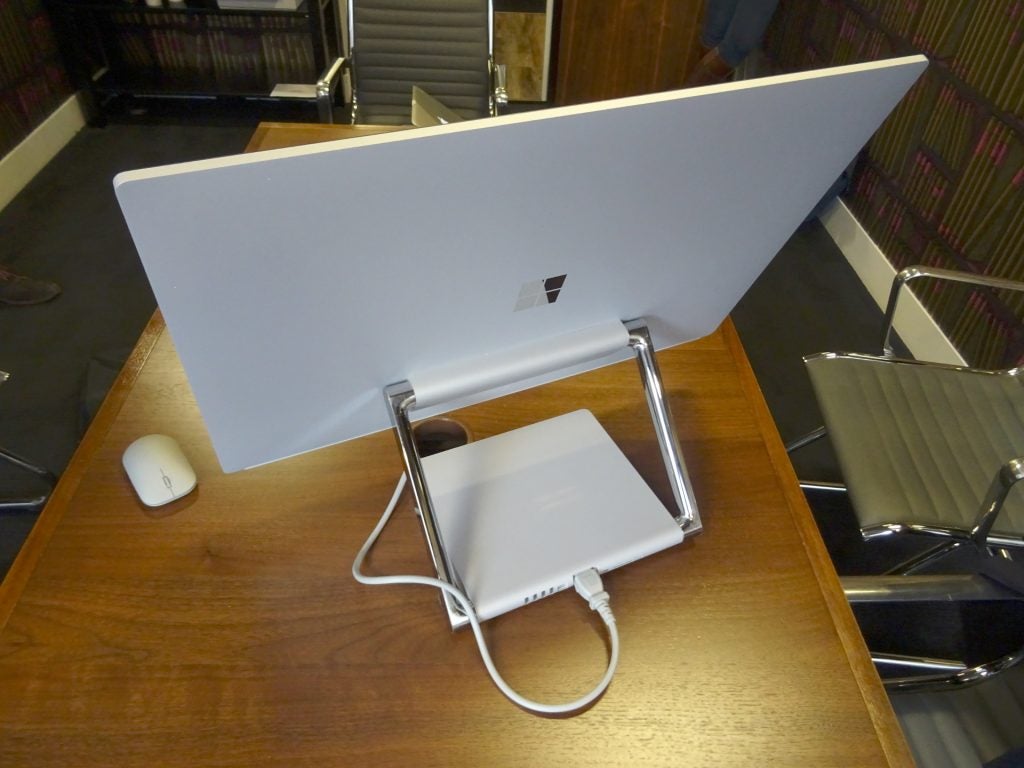 All of the ports are found ’round the back, with four Type-A USBs and a Type C and a SD reader sitting astride the power supply socket.

Heading around to the other side of the Surface Studio 2, there are four Type-A USB ports and one Type-C USB port on the back, next to an SD card slot. The Type-C port does not support Thunderbolt 3, which means that there’s little point in using an external GPU here, but will still be useful if you wanted to attach a hard drive, keyboard, charge your phone, or use any other kind of peripheral with a Type-C connection.

In terms of storage and graphics, you get either a 1TB or 2TB SSD baked in, alongside an Nvidia GeForce GTX 1060 or 1070 GPU, which come with 6GB and 8GB of GDDR5 video memory respectively. That’ll be fine for most photo and digital art work, but it’ll struggle to play the most up to date AAA games. In terms of general memory, your options are 16GB or 32GB of DDR4 RAM.

I’m quite enamoured with Microsoft’s Surface Studio 2. There’s no denying the screen is impressive, and it works well with the Surface Pen and Surface Dial. There’s also no denying this thing is super expensive.

My initial hunch is that digital artists, especially folk who work on print magazines, will love this, due in part to the fact you’re better able to zoom in, rotate and alter your work from every possible angle. The colour fidelity promised by the sRGB mode should also be a real plus – though we’ll want to perform colorimeter tests as soon as we get a review sample to verify this.

Those who won’t immediately benefit from using a device with a 28-inch touchscreen might be tempted to look elsewhere for a Windows all-in-one workhorse.