While the Surface Pro’s design has some rough edges, its screen is outstanding. Fine, the 10.6-inch, 1,920 x 1,080 resolution screen isn’t ‘retina’ standard, but then a lot of guff is expended on an idea of only marginal import. Thanks to Windows’ Clear Type technology, text is every bit as sharp and crisp as on the iPad 4 or Nexus 10, and you’ll struggle to notice the difference anywhere else.

Vitally, the colours, contrast and the viewing angle can’t be faulted. HD videos from any decent source look fantastic, with lots of fine detail that a typical £700 or so laptop won’t uncover. The Surface Pro’s touch performance, with finger or pen, is faultless, too.

Sound quality from the Surface Pro’s stereo speakers, however, is adequate and nothing more. Indeed, they’re scarcely louder than the iPad 4’s mono speaker. 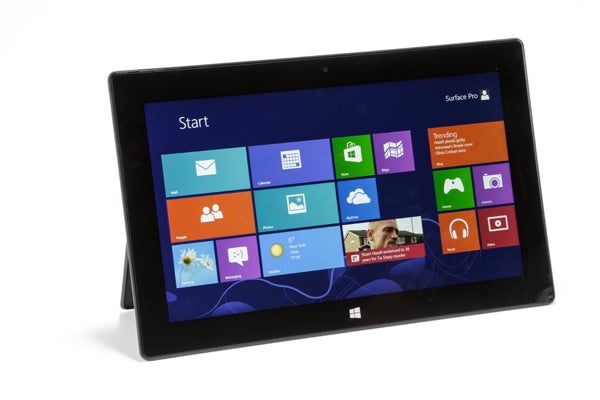 Windows 8 Pro on the Surface Pro – The Good Bits

Pay attention. This is important. Everything that makes Windows 8 jarring to use on an ordinary laptop or desktop PC, or even a standard touchscreen laptop as the Samsung Series 5 NP540U3C recently demonstrated, makes sense on the Surface Pro.

You won’t miss the Start button; you’ll grow to love the new Start Screen and its Live Tiles; you’ll love ‘snapping’ Twitter, the Music app or the Mail app as a sidebar while you work; and you’ll definitely enjoy the freedom of having the tablet world and desktop world at your fingertips whenever you so choose. 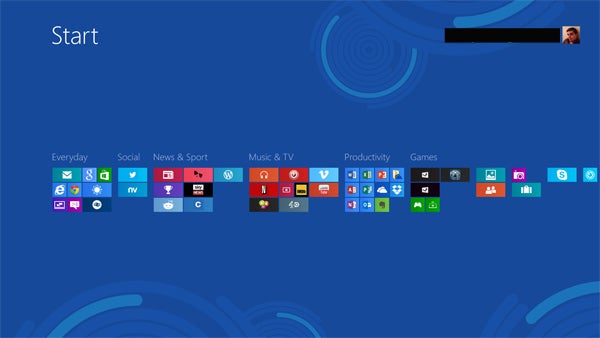 On the tablet side of things, the interface formerly known as ‘Metro’ is far more engaging and (dare we say it) delightful than anything Apple or Google has come up with. Live Tiles, Microsoft’s alternative to app icons, let apps show live info such as headlines and new emails as they appear. They create a sense of activity and interactivity missing on iOS, and are less fussy and clumsy than Android’s widgets.

Live Tiles has small and large modes, too, which adds a nice touch of flexibility and variety compared to a pure grid format. Organise your Live Tiles into groups and you have an instantly more intuitive, engaging and accessible way to organise your apps than the clumsy, easily forgotten folders of iOS. Any rational iPad owner who uses the Surface Pro (or Surface RT for that matter) will quickly realise just how limiting and antiquated Apple’s system is. 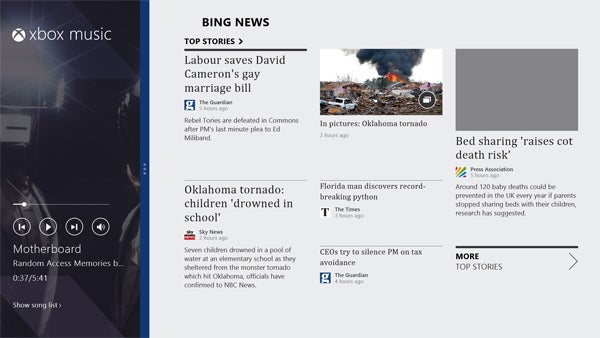 Apps can snap to the left or right of screen – useful for Twitter, Email and Music.

A special mention must go to Microsoft’s own tablet apps, too. Bing News in particular, which collates the top stories from reputable sources in one neatly designed app, is a joy to use, particularly as it supports offline reading. The weather app is ace, and the tablet version of Internet Explorer is slick if a little basic.

You can even ‘unpin’ Microsoft’s apps – are you listening Apple?

Spare a thought for the provided digitizer pen, too. In truth, unless you’re a devout OneNote user, doodler or in some creative trade, you won’t use it that much, but it works damn well. Handwriting recognition is superb – useful when onscreen keyboard is inconvenient – and it wipes the floor with any capacitive screen stylus. It’s just a shame there’s nowhere to put it.

Windows 8 Pro on the Surface Pro – The Caveats

But the course of true love never does runs smooth. There’s a great deal to love about the Windows 8 tablet mode, but Microsoft seems determined to hide it under layers of frumpy padding. Instead of easing you into all the new features, and the tips and tricks necessary to get Windows 8 working for you, Microsoft drops you and leaves you to sink and swim.

For days we were convinced there was no ‘Mark as Unread’ feature in the Mail app, only to discover that swiping from the bottom screen revealed a set of otherwise hidden options. We only discovered the incredibly useful method for ‘grouping’ tiles in the Start Screen by stumbling across an online guide when in search of something entirely different. Oh, and you have to exit ‘tablet mode’ entirely just to get an accurate idea of how much battery is remaining. Ho hum.

Once you get used to these and other foibles you quickly learn to ‘experiment’ to find what you need, but this opaqueness is at the heart of the mixed reactions to Windows 8. Microsoft alone is to blame. 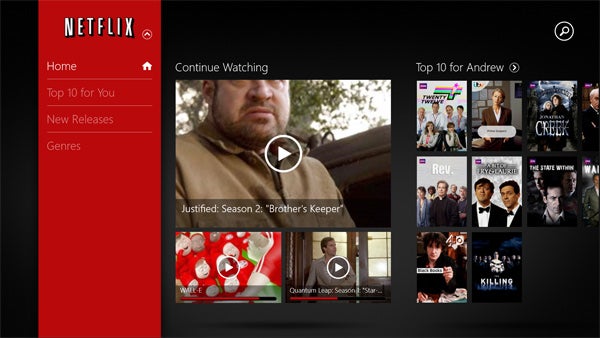 The Netflix app is one of the few, big-name highlights.

The Windows Store has a very long way to go to match the variety and depth of rivals, too. Skim the surface and there’s a smattering of excellent, high-profile apps. The Netflix app is great, Twitter has an official app and while there isn’t an official Facebook app, Social NV is an excellent free alternative.

But it doesn’t take long to uncover the perilous lack of depth. After a week or two we feel as if we’ve uncovered everything worth seeing, and when’s the last time you heard about an exciting new Windows 8 app?

It’s not revelatory insight to say this is one of the Surface Pro’s biggest problems.

Storage is another bugbear. Call something a tablet and their expectations change. So when the Surface Pro says it comes with 64GB or 128GB storage out box, people expect something close to those numbers. But this is Windows, which leaves just 29GB and 89GB spare respectively after the OS and various detritus, including a recovery partition. It’s a small(ish) niggle, but a reminder that a simple tablet this is not.