The Microsoft Surface Pro 7 feels more like a Surface Pro 6.5 than an actual new product. The only significant changes are the addition of a USB-C input and a move to Intel’s newer 10th-gen family of laptop CPUs. However, it remains a solid convertible and great choice for those looking for a flexible machine that works equally well as an office laptop as it does as a personal tablet.

Thinking about investing in a super-swish convertible that will work as both a work laptop and personal tablet? Then you’ve probably considered picking up Microsoft’s latest Surface Pro 7 – and for good reason.

Past Surface Pros have offered a superb balance, combining iPad Pro-rivalling hardware with a superior keyboard Type Cover and the added allure of full-fat Windows 10. This remains the case with the latest generation, which is one of the best Windows convertibles on the market.

Be warned, though: if you’re already the owner of the recent Surface Pro 6, or even the older Surface Pro 5, there’s little reason to upgrade. The 7th iteration is a minor upgrade on the 6 that plays second fiddle to its sibling, the Surface Pro X, when it comes to innovation. The only significant changes are a move to Intel’s new 10th-gen CPU family and the addition of a USB-C connector.

Surface Pro 7 price – How much does it cost?

But, of course, you can power it up. Here are all the configurations you can choose from, and their corresponding prices:

From a distance, you’ll struggle to tell the new model and Surface Pro 6 apart. Both sport near-identical designs, featuring a metallic, slightly boxy main tablet section. The only design flourish on either model is a shiny Windows logo on the tablet’s metal rear.

The kickstand design of the previous model remains, as does the 12.3in screen, which has the same 2736 x 1824 resolution and 3:2 aspect ratio. The button and camera setup is also identical; Microsoft has loaded the Surface Pro 7 with a basic 5-megapixel front camera and an 8-megapixel rear camera.

The only difference, as mentioned, is that around the Surface Pro 7’s side you’ll find a USB-C port. This sits next to the tablet’s proprietary power, Type Cover, USB-A and SD card inputs. The extra input is a bonus and means the Surface offers significantly better connectivity than the competing iPad Pro. However, I can’t help but be a little disappointed that it isn’t a Thunderbolt input, and that the Surface Pro 7 still uses a proprietary charger.

The design isn’t revolutionary, and it isn’t as alluring as that of the iPad Pro line, but it still ticks all the right boxes when it comes to functionality. As before, the Surface Pro’s kickstand makes it quick and easy to place the device in an upright position, at any angle you like; it’s a boon when doodling or sketching, using the optional S Pen stylus.

The only downside is that, as before, the metal finish is prone to scratching and will easily pick up blemishes. I also remain a little perturbed at the lack of any dock for the S Pen. A few years ago this would have been fine, but with the Surface Pro X offering a cool charge dock, the lack of a means to store the stylus feels like an obvious omission. 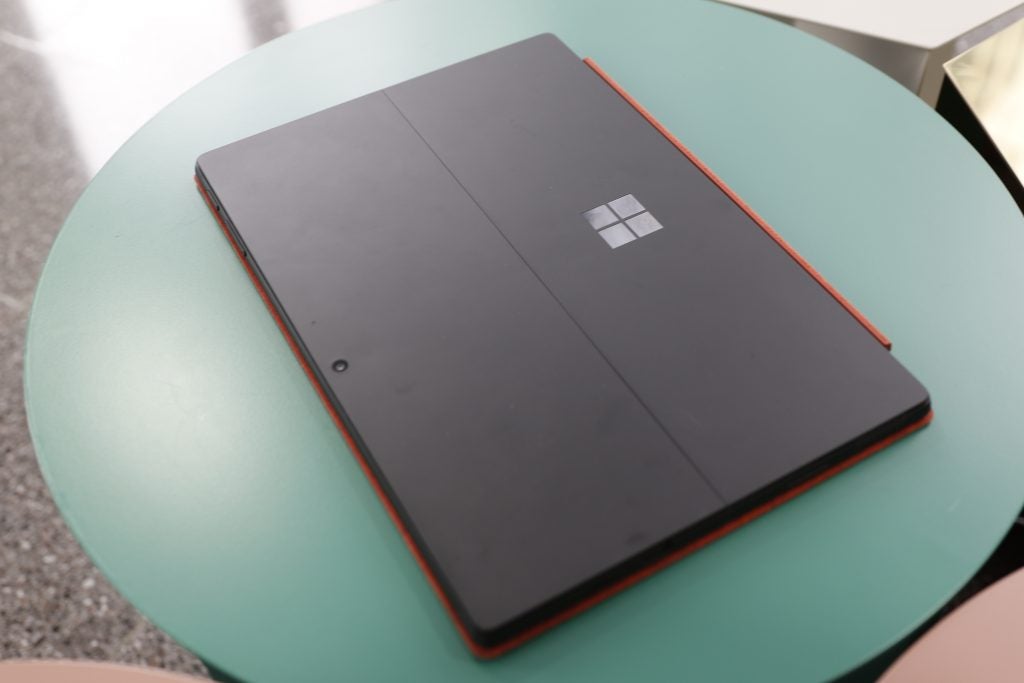 The optional Type Cover keyboard also remains unchanged, although this isn’t necessarily a bad thing. The Type Cover’s chiclet keys don’t offer the best travel, especially when compared to regular clamshell laptops, but they’re a clear step up on most convertible offerings.

Keys display a pleasing bounce and are sufficiently well spaced to offer a comfortable typing experience. This isn’t something I can say about the iPad Pro’s slightly squidgy keyboard cover.

The trackpad is similarly good. Throughout testing, the pad reacted to multi-touch inputs hassle-free.

The only downside is that, as ever, you have to pay over £125 extra to get the Type Cover. Being fair to Microsoft, you also have to pay extra for the iPad’s keyboard. However, it feels a little less acceptable on a device running Windows, which has a PC/laptop user interface. 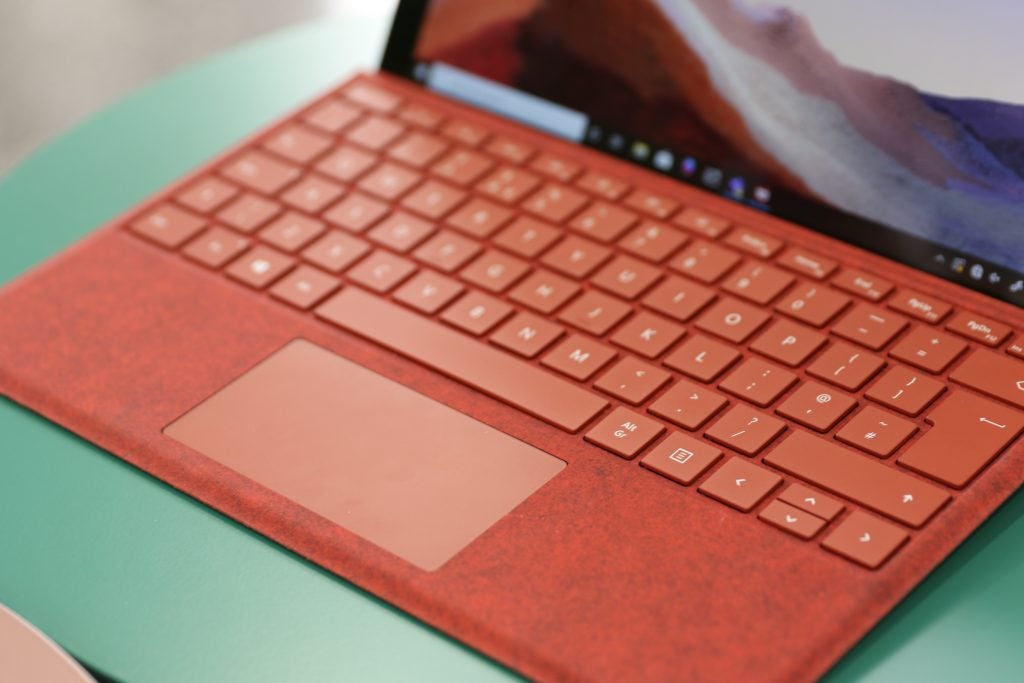 Display tech is one of the main areas where Microsoft’s Surface Pro devices have consistently fallen slightly behind the competition. The screens always offer great contrast ratios and are more than good enough for regular use. But they never wow when it comes to colour gamut coverage; this is a key area for creative users looking to use the Surface for photo editing or design work. This remains the case with the Surface Pro 7, which uses the same panel as the older Surface Pro 6.

Cracking out Trusted’s colorimeter, the 0.3-nit black level is excellent for a non-OLED screen. Along with the 430-nit max brightness, it ensures the screen has an impressive 1258:1 contrast ratio. This results in a screen that’s wonderfully vibrant and great for Netflix binges, although it doesn’t meet any HDR standard. The 6457K colour temperature, which is super-close to the 6500k ideal, ensures the screen looks clean.

Sadly, things once again nose-dived when I started checking colour gamut coverage. The 90.2% sRGB coverage shows that the screen will prove great for normal users. However, the 64.1% Adobe RGB and 65.9% DCI-P3 figures put the Surface well behind the Dell XPS 13 2-in-1 and iPad Pro lines for creative users.

This is a shame, since the S Pen is as good as ever. The N-trig powered stylus is great for scribbling notes; plus the nib replicates the experience of writing on paper far better than the competing Apple Pencil. 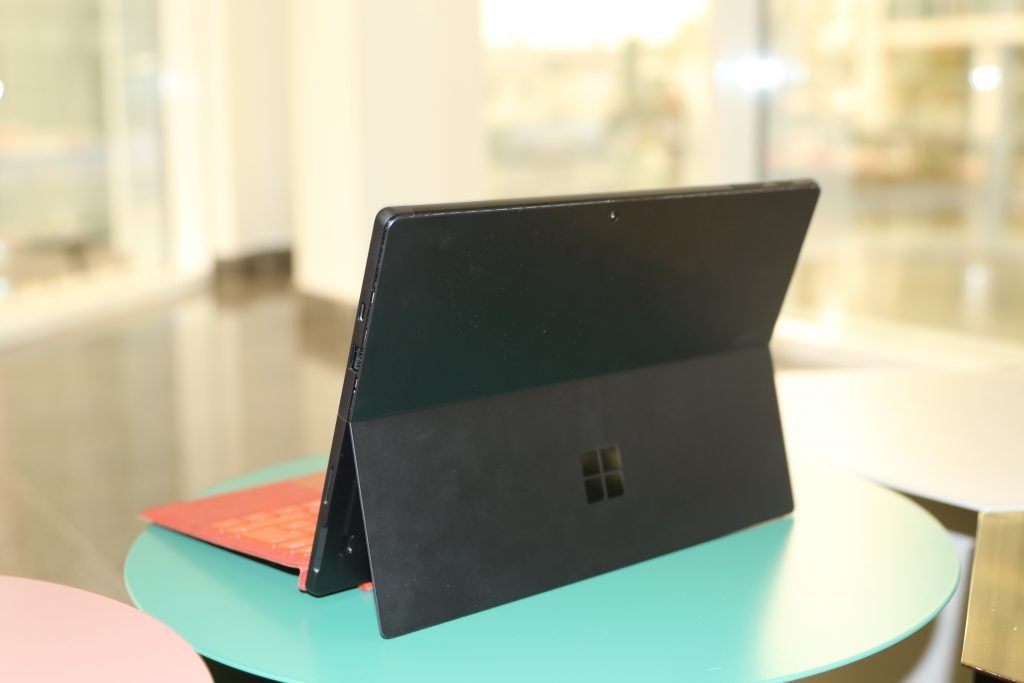 From there you can configure further, choosing between 4-16MB of RAM and 128-1TB of storage. Prices range between £799 and £2249, depending on the exact specs, and will go up further if you opt for a Type Cover or Surface Pen.

My real-world findings were backed up in CrystalDiskMark, where the 256GB SSD managed 2015.4 MB/s read and 805MB/s write speeds. These scores are in line with most similarly priced laptops and convertibles, and show that the Surface Pro 7’s SSD is nippy enough for creative work.

Gaming was beyond the Surface Pro 7 for the most part. I only ever managed to get very basic games – such as Darkest Dungeon – to run. Even lightweight games such as Overwatch were beyond the device at playable frame rates, but that’s hardly surprising given the lack of graphics options.

Running Trusted’s standard suite of synthetic benchmarks, the move to 10th-gen saw improvements across the board when compared to the Surface Pro 6, although a direct comparison is tricky, since we were only able to test the i5 version of the older Surface.

You can see a breakdown of how the Surface Pro 7 performed next to a similarly specced Dell XPS 13 2-in-1, which is one of the only other 10th-gen laptops we’ve currently tested. 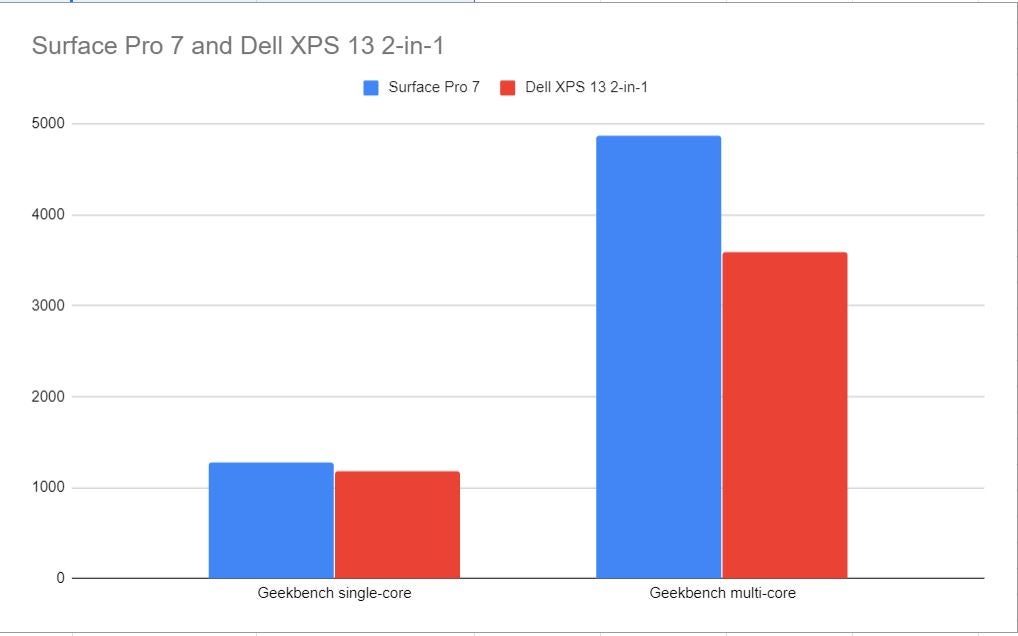 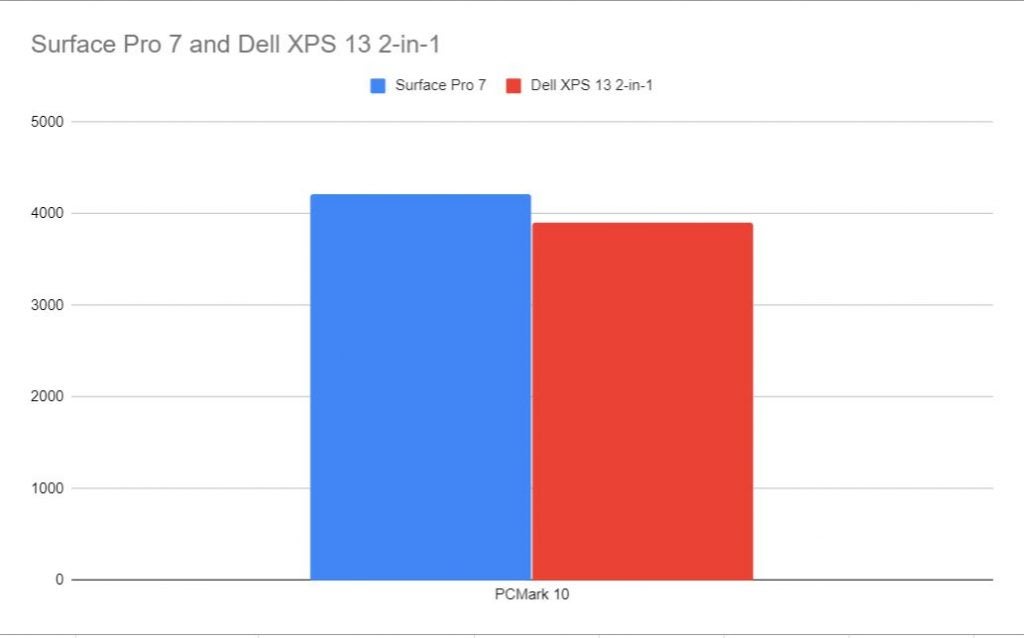 Surface Pro 7 battery life – Can it match the quoted 11hrs of juice?

Windows convertibles tend to offer poorer battery life than their iPad Pro rivals due to their use of full-fat laptop parts and more demanding Windows operating system. This remains the case with the Surface Pro 7, which has a quoted battery life of 11hrs.

In real-world use the laptop’s battery life fell slightly short of this, although it was still easily enough to survive a full working day or a long-haul flight to the US. Using the Surface as my main work machine, the Pro 7 easily made it from 9.30am to 5.30pm with 10-15% of its battery remaining. The workday entailed constant word processing and web browsing, watching some Netflix over lunch, and scribbling notes using the S Pen during a few meetings.

Charge speeds are just about good enough using the out-of-the-box adapter. In general, I found Microsoft’s 0-80% in an hour estimation accurate, if the device is powered down. 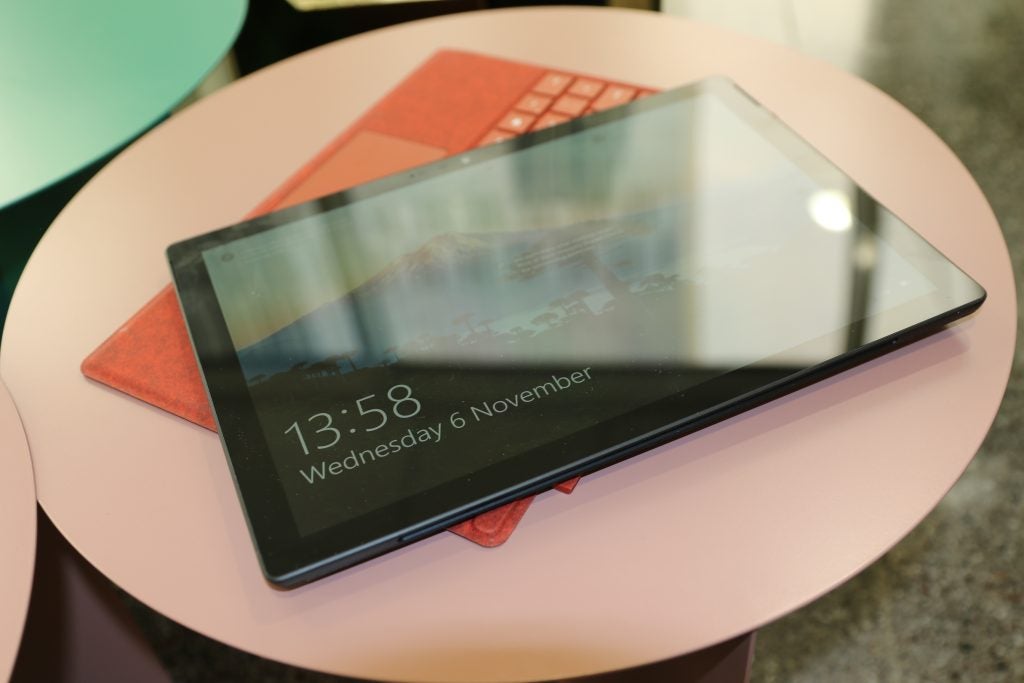 Should I buy a Surface Pro 7?

If you have a Surface Pro 6, or even a semi-recent Lenovo Yoga or Dell XPS, then there’s little reason for you to invest in the new Surface Pro 7. The device is near-identical to its predecessor, to the point that the name Surface Pro 6.5 might be a more accurate description.

The only real changes are the addition of a new USB-C port and an upgrade to Intel’s 10th-gen family of laptop CPUs. However, if you’re on an older device and want a decent Windows machine that’s equally at home functioning as an office laptop as it is as a mobile Netflix station, then the Surface Pro 7 remains a solid choice.

The Surface Pro 7 doesn’t shake up the Surface line in the same way that the Surface Pro X looks set to. Nevertheless, it still gets all the basics right and manages to earn its place as one of 2019’s most reliable Windows convertibles.