While the starting price for a 64GB Surface Pro 2 is £720, in reality it’s at least £820 once you’ve chosen the cheapest of the two keyboard covers, the £100 Touch Cover 2, or £830 if you opt for the £110 Type Cover. Microsoft only gave us the Touch Cover to test, though that’s fine really as the Type Cover (though updated this year) is more of a known quantity – it’s a keyboard in the entirely traditional sense. 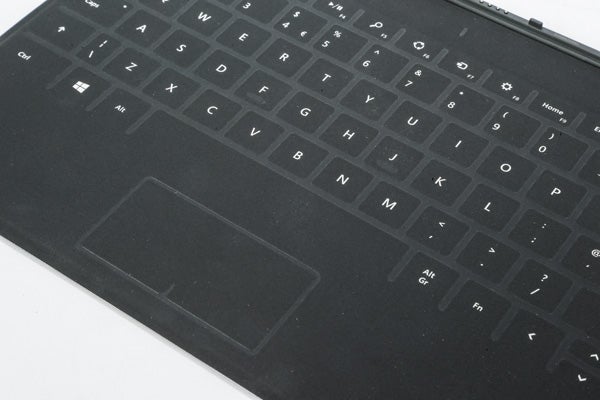 The Touch Cover 2, however, has seen a serious update. Not only is it thinner, lighter and backlit, Microsoft has upped the number touch sensors from a miserly 80 to a far more impressive sounding 1,092. The difference is akin to going from one of the old style resistive touchscreens of yore to the capacitive ones we’ve come to know and love. If you’re in any doubt as to how great a difference that is let us know simplify: it’s huge.

In fact, it’s so great that whereas the 1st generation Touch Cover was an interesting curio rather than a realistic option, the Touch Cover 2 is good enough to be mentioned in the same breath as its traditional cousin. The result of adding so many more sensors is a far better reaction to off-centre hits, both in identifying them and in ensuring the right key is detected. 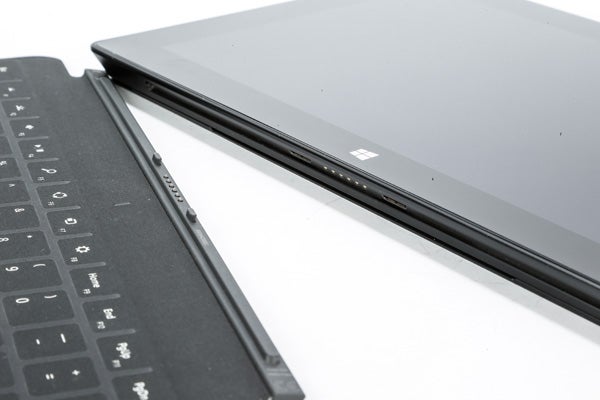 It’s not just the sensitivity that’s improved, either. Making the Touch Cover 2 thinner has eliminated that slightly stodgy, ‘stale cake’ feel of each key in preference for a firm, flat feel. It’s far more like using a really, really good touchscreen keyboard, one we’ve comfortably used to tap out this whole review with little complaint. The Touch Cover 2 is tougher and more rigid, too, which makes it easier to use on your lap. It also makes a nice platform for the kickstand if you fold back behind the Surface Pro 2, which is great when you just want to kick back and watch a video.

It’s damn impressive, and while we’ll reserve judgement on which keyboard to buy until we’ve tried both in anger, the difference between the original Touch Cover and the Touch Cover 2 is light and day.

It would be remiss of us not to mention the provided stylus, too. It’s an essential part of the Surface Pro experience, particularly on the desktop where it acts as alternative mouse pointer for the fiddlier parts of the desktop OS. It serves this purpose ably, but there’s a lot more to it than that. It adds a whole new dimension for creatives, while allowing genuine handwriting input for people who require, or prefer, a more flexible input method. It’s easy to overlook or downplay this point, but there’s nothing currently on the market that really matches the Surface Pro 2 in this experience. 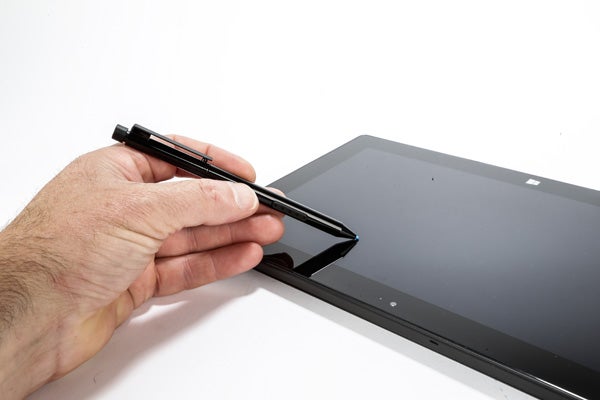 As mentioned earlier, our Windows 8.1 review is the place to go for an in-depth look at all the changes, or try our Windows 8.1: What New? feature for a more succinct overview. As with the original Surface Pro, using the Surface Pro 2 is to experience Windows 8 as it was intended. Windows 8.1 strengthens the case, but there’s still important things that Microsoft needs to iron out.

Of all the UI changes, the one that has the most profound impact is the more flexible split-screen options. It means you can view your desktop app the touch version of Internet Explorer side-by-side and infinitely vary the size of the split as you prefer, rather than being restricted to set sizes. It really helps multitasking on a comparatively small screen, and it remains one of the Surface Pro’s biggest strengths. 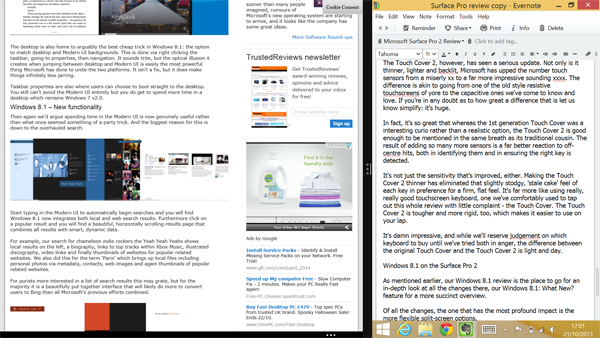 You can now make window splits of any size, great for multi-tasking

The only change that, for this author at least, jars a little is the new smaller thumbnail tiles. While they’re very efficient space wise, the uniform style of the Modern Style UI (eurgh!) means they’re difficult to differentiate when clumped together. This is a taste issue, though, and a totally avoidable one since you choose what size tiles you use.

On the app side of things, we love the new Bing search presentation, a feature that shows why Microsoft has persevered so much with its own search despite Google’s dominance. It’s a genuinely innovative and visually arresting way to present search results that’s totally touch friendly. The fact you get free streaming on Xbox Music is a great ‘nice to have’ as well, while the improved Mail app means the roster of official touch apps is very good indeed. Bing News is the equal of the Flipboards of this world, while the new Reading List feature gives you an official alternative to Pocket and Instapaper.

But there’s no escaping the continued paucity of the Windows Store. The addition of Facebook is great, but the store is still shallow and Facebook is the first serious new app announcement in a long time. Microsoft’s own apps fill the gaps in many places, but it feels under populated and that doesn’t look like changing any time soon. 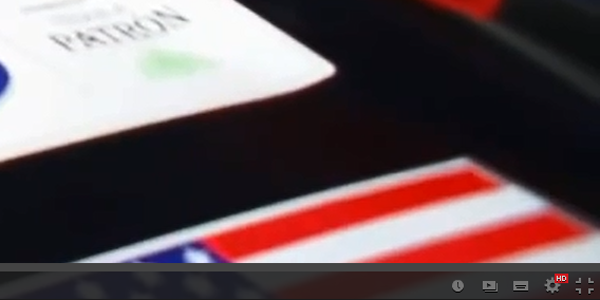 We must also whisper a word of complaint about Windows 8’s continued poor handling of high DPI displays in desktop mode. Microsoft’s own apps, such as the desktop version of IE, handle things absolutely fine, but third-party apps aren’t so forthcoming. Google’s Chrome is a particular offender. In desktop mode it looks blurry, but in full-screen ‘Windows 8’ mode all the UI elements are stupidly small.

It’s one area where Microsoft’s less than tight grip on the Windows ecosystem comes back to bite it as there’s little incentive for developers to make allowance for these kinds of screens. Microsoft would do well to court favour with some of the more high-profile ones and encourage them to consider fixing these issues as it’s only going to amplify as higher resolution displays filter down below the top-end Ultrabooks and tablets.