Windows 10 laptops tend to be very similar when it comes to software. The only real difference between each device is what bloatware the company has loaded. Microsoft has gone in a different direction, shipping with Windows 10 S, which is a limited version of Windows 10.

In short, it limits you to apps found in the Windows Store, the Edge web browser and the Bing search engine by default. With most of my work done online in a web browser, this wasn’t a big issue for me until it became clear that my Adobe Creative Cloud subscription won’t work on Windows 10 S, and neither does Spotify in the UK. If you have specialist freeware programs or business software that you use every day, you’ll likely run into the same problems.

I like the reasoning behind Windows 10 S, but for me it’s not enough to justify sticking with it as a normal user. I’d understand a school or business buying students or employees Windows 10 S laptops so they can’t mess them up with unknown, potentially harmful programs. But if you’re buying it as your personal laptop, you’ll immediately want to unlock it. Fortunatley, you’ll be able to do so for free until the end of 2017, after which it’ll cost you £50. 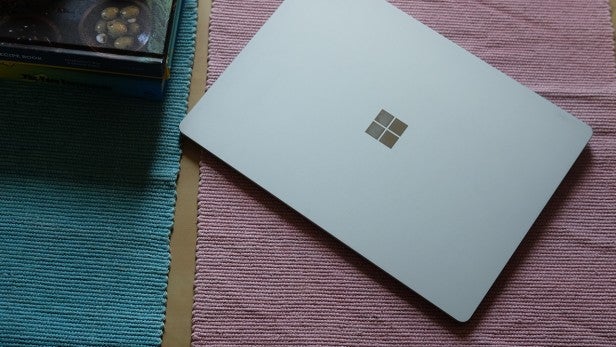 These are both dual-core processors, although the difference between the two is higher than most laptops that give you a choice of dual-core Core i5 and i7 chips. The i7 will be a good choice if you’re going to be editing videos and exporting lots of photos, and the 4GHz speed puts it in the same performance ballpark as the top-spec 13-inch MacBook Pro that launched earlier in June.

The cheapest model comes equipped with the Core i5, 4GB of memory and 128GB of storage for a very reasonable £979. This setup is fine if you have modest usage demands, such as a bit of web browsing and streaming. But if you want to do anything more without running into performance problems due to the lack of memory, I’d recommend the mid-range option for £1249. For the same money, at the time of writing, you can bag a Dell XPS 13 with a slightly faster Core i7 processor. This nets you 8GB of memory and a 256GB SSD. If you want to spend more, the Core i7 model is actually quite competitive at £1549, but that’s a lot to shell out. 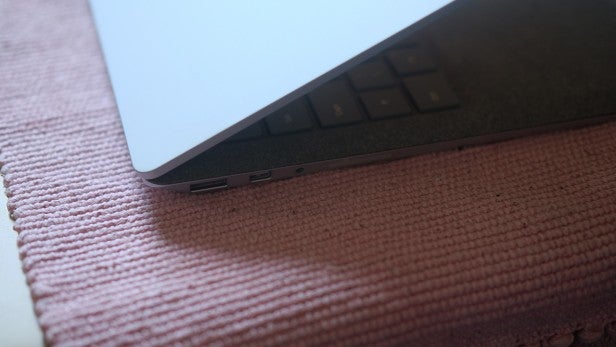 Whatever you pick, you’ll be happy with performance. The system is quick in basic tasks such as opening web pages and images, and it’s more than happy enough with dozens of Chrome tabs open. That’s if you’re actually able to install Chrome. See the software section.

In the benchmarks, up against the Acer Swift 3 and the Huawei MateBook X, which are the two most recent laptops to ship with the same processor, it came out on top with a PC Mark Home score of 2605, and it also pulled ahead in GeekBench 4. It’s not as fast as the base-model MacBook Pros, though, nor will it unseat the lighter Lenovo IdeaPad 710S and its Core i7 processor.

Microsoft seems to have cut costs with the specification of the SSD, which put in disappointing read and write scores of 649 and 239MB/s. It’s much faster than a standard hard disk, but when the likes of the Dell XPS 13 and Lenovo IdeaPad 710S are putting in performances at least twice as good, I can’t help but feel a little disappointed.

While performance doesn’t set the world alight, I’ve been quite impressed with the laptop’s battery life. Using Windows 10’s new battery slider, I’ve kept it on Recommended whenever I’ve been away from the mains and at well below half brightness, and been able to get through a full work day without issue.

In our battery benchmark, which uses a Powermark plan switching between web browsing and video playback while connected to Wi-Fi with screen brightness at 150 nits, it managed just under nine hours. This is slightly down on the Dell XPS 13 and around the same as the Asus ZenBook 3. 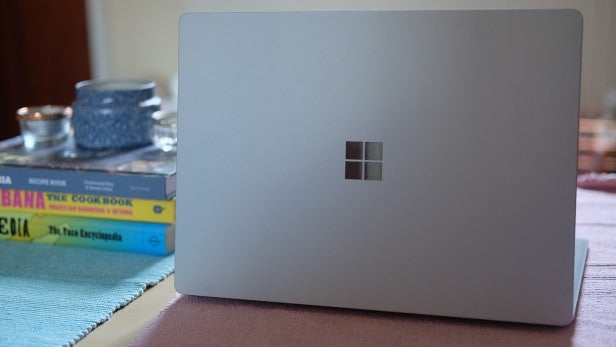 Should I buy the Microsoft Surface Laptop?

In isolation, the Surface Laptop is an attractive machine. It performs well, manages all-day battery life and is lightweight enough for any shoulder bag.

But there are drawbacks: the SSD is slower than those of all its rivals, it runs the limited Windows 10 S (although there’s a free upgrade to full-fat Windows 10 for now), and the likes of the Dell XPS 13 and 13-inch MacBook Pro offer comparable performance for similar money. There are perks, though: the Surface Laptop’s screen is better than any other Ultrabook, it has one of the best keyboards and touchpads you’ll find on a laptop today, and the speakers are very good.

On balance, I would still recommend the Dell XPS 13 at this price, the Lenovo IdeaPad 710S for under a grand, and the Acer Swift 3 for those on a budget. The Surface Laptop does have the advantage of coming with some hefty discounts if you’re a student, which are well worth looking at.

A well-built and desirable laptop – with some very strong rivals.