A pair of headphones for work and play, the Surface Headphones 2 feature a few improvements over the original (aptX, Bluetooth 5.0), while keeping their great comfort levels and terrific ANC performance

The Surface Headphones 2 are the latest over-ears in Microsoft’s Surface Audio line-up, with a lower price than the original.

The Surface Headphones 2 are Microsoft’s second bite of the headphone cherry. The original could be considered a success, with their respectable performance and some great features.

That gives the sequel a solid platform to build on. Cheaper, and now furnished with aptX for Bluetooth, has Microsoft unlocked more of the Surface Headphones’ potential? 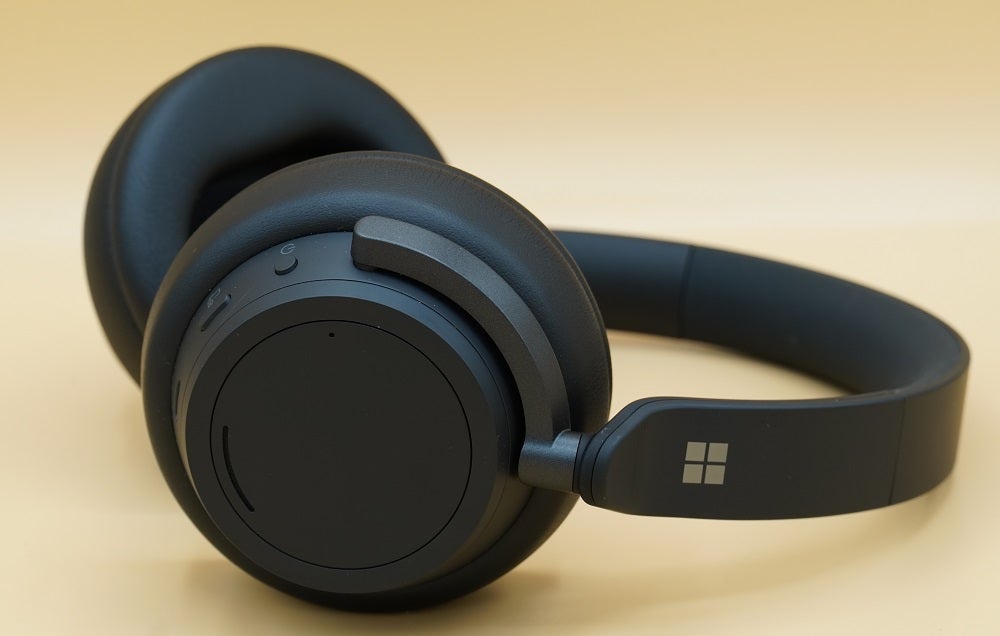 It’s a design, you’d imagine, that’s been crafted by people who know what it’s like to wear a headset for hours. Despite the plastic frame, the curved, ergonomic shape makes them easy to slide on and though they tip the scales at 290g, they feel very lightweight.

The amount of padding on the earpads is well-judged and they’re soft; with enough give so the fit doesn’t become irritating over extended periods. There’s no real sense of overheating or pinching around the ears, nor does the headband dig into your head. 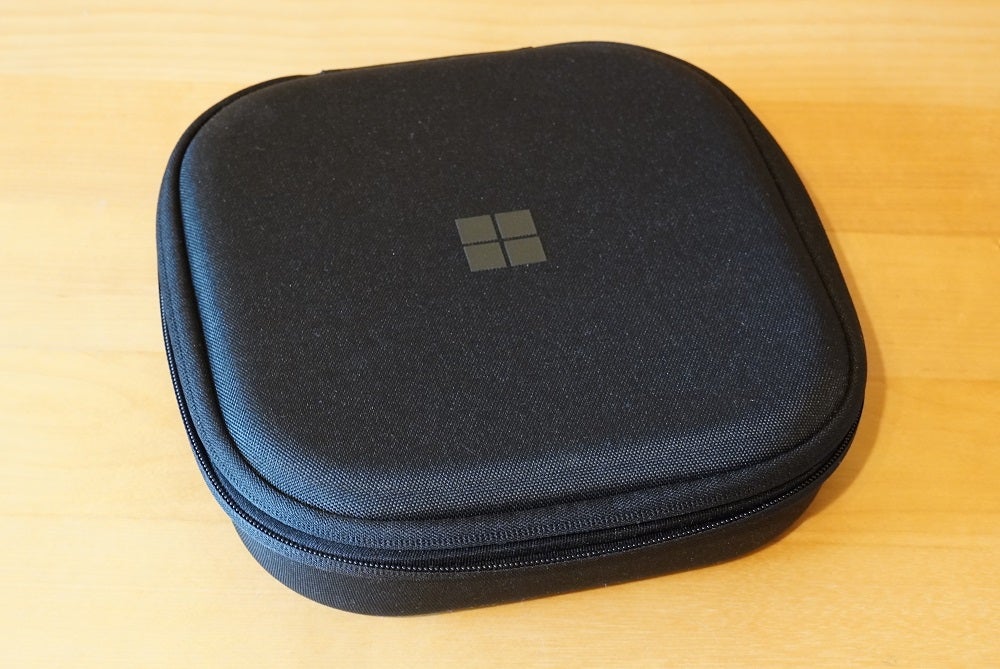 The earcups rotate 180 degrees but only inwards. You can’t fold them up, which is where the hard carry case makes itself useful. It thoughtfully has a section where you can tie up the USB-C charging cable and 3.5mm jack. Located on the right earcup are the power and mute buttons.

The headphones come in two finishes with Microsoft introducing to the line-up… matte black. Despite the unoriginal choice, the black finish looks smart, with the Windows logo popping better than on the grey/platinum finish.

Surface Headphones 2 features — ANC performance is among the best available

Microsoft has righted a few wrongs with the inclusion of aptX and Bluetooth 5.0. Other improvements include battery life boosted from 15 hours to up to 20 hours (with Bluetooth and ANC on).

Except that isn’t wholly accurate. Charged to full and the indicator helpfully stated there was only 18 hours. With regular use it feels the tank empties quicker than you’d like. Quick charging is present, with five minutes enough for an hour of playback. 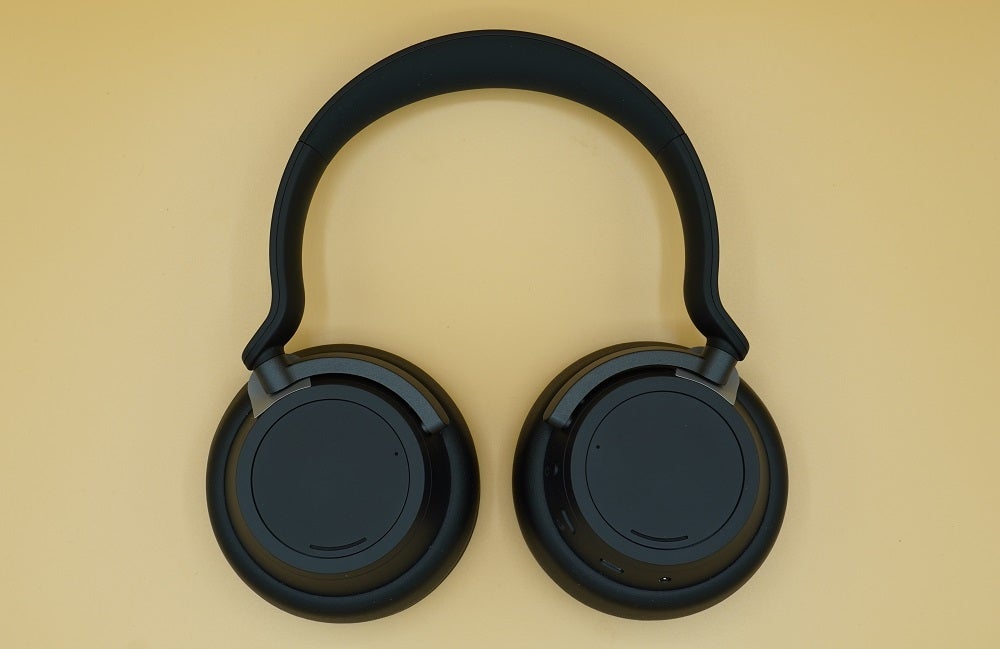 Microsoft has kept the rotary dials to cycle through volume and ANC levels, and using them is fantastically intuitive and smooth. The right earcup is to control volume, and the left to control ANC, and you’ll hear bleeps or voice prompts that indicate whether you’ve gone up or down. While 13 levels of ANC adjustment sounds like overkill, it provides ample room for finding the appropriate level.

And the ANC performance is formidable. Scrapy and low, throaty sounds evade the Surface 2’s ANC but not much else. Cars and buses are little more than whooshing noises going past and that’s without music turned on. Play music at normal listening levels and they’re practically non-existent.

ANC obviously takes a hit when dialled down, but the Ambient mode works well, filtering through sounds to the point where it becomes porous. However, knock it down to lower levels and playback becomes thinner. 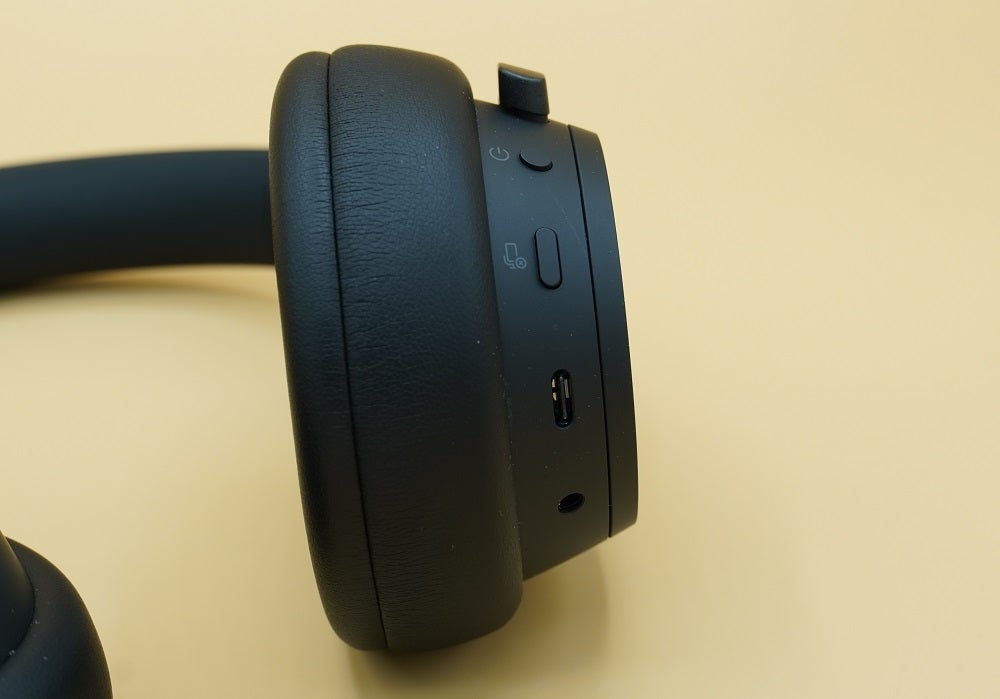 The sides of earcups also act as a surface for touch controls, so taps or swipes can play/pause or skip forward/back respectively. Take the headphones off and they’ll auto-pause, and this works well.

There’s Swift Pair functionality for Windows 10 PCs, and you can connect to at least two devices at once. Initial Bluetooth pairing is easy and can also be done through the app. But powering the headphones on and establishing a connection can be excruciatingly slow. 45 seconds may not seem an eternity, but it takes that, if not longer, for the headphones to connect to an iPod Touch and music to start playing. 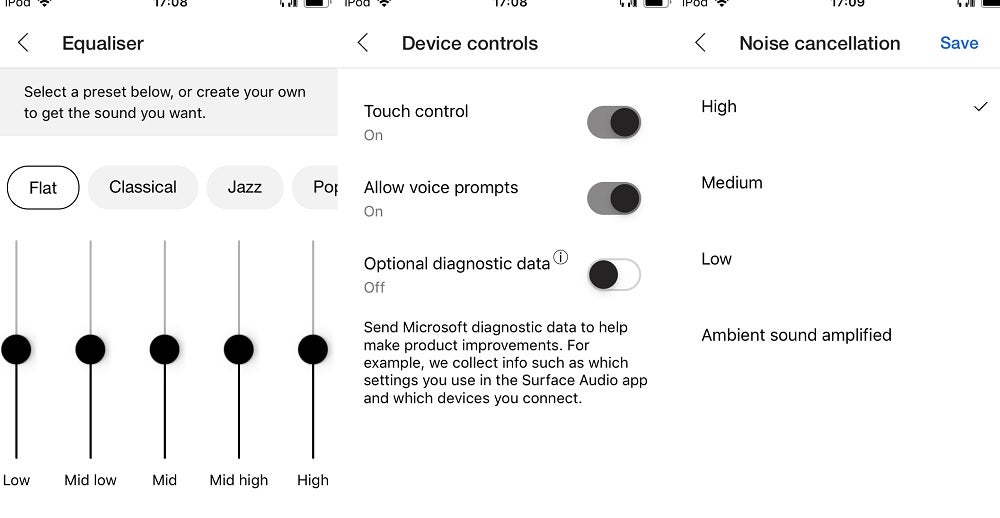 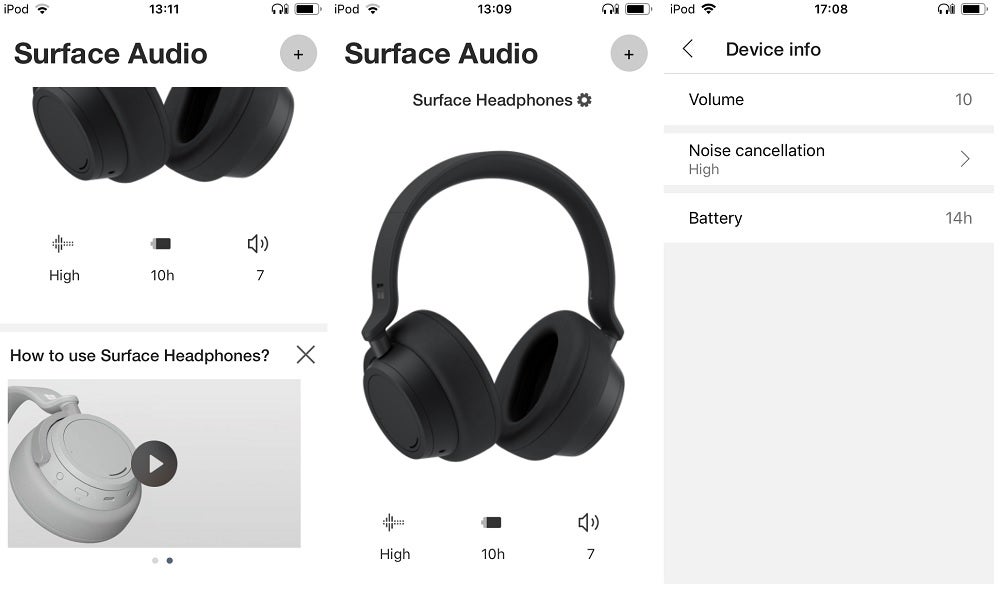 The Surface Audio app covers the basics. Though rather grey in its interface, ANC levels, volume and battery levels can be viewed. There’s also equaliser presets and adjustments; you can view paired devices, toggle on/off touch controls and voice prompts, as well as manually select ANC and Ambient sound levels.

Other Windows specific features include dictation in Word, Outlook mailbox and Powerpoint (Windows 10 required for the latter). The Play My Emails in Outlook feature is compatible with iOS, requires a subscription and seems to only be available in the U.S.

Surface Headphones 2 performance — A smooth, enjoyable performer that lacks a little in the excitement stakes

The Surface Headphones feature 40mm Free-edge drivers for a distortion free performance, and the word smooth immediately comes to mind. They’re slightly warm in tone, which gives them an enjoyable, if soft presentation that’s easy on the ears.

Their mid-range performance is the best aspect of the sound. There’s a richness to its tone, textured and expressive in how it conveys instruments and detail. There’s good clarity to voices too, Aretha Franklin’s vocals in Rock Steady stand out. Other headphones achieve more emotion and dynamism with vocals, but these do sound pretty good, nonetheless. 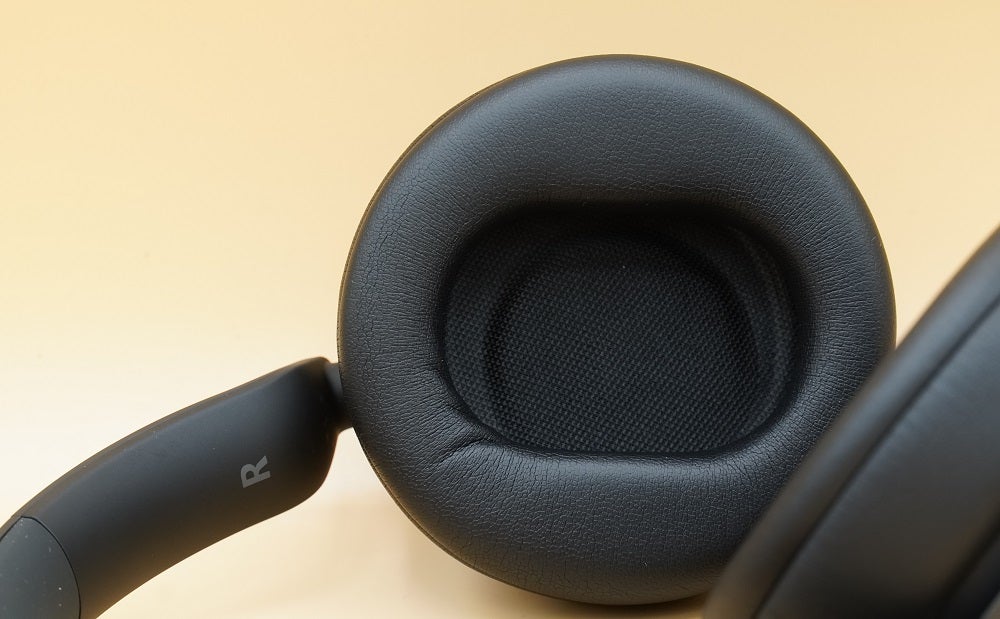 Dynamically they’re fair, not quite excavating the highs and lows of a song, but there’s a reasonable dynamism on offer. Treble is good, though much like the original headphones, it doesn’t bite into high frequencies with as much aplomb but serves up a satisfactory description. Rhythmically they engage too, achieving a nice, engaging sense of pace in Justin Timberlake’s Let’s Take A Ride.

Bass is on the tubby side, soft in places where it could do with more punch and impact. The warmth and smoothness of the headphones means they’re fairly consistent in their character, but that does mean the soft bass is fairly prevalent. Bass hounds may want to apply elsewhere.

The Surface Headphones are fairly laid back in attitude, and its smoothness results in a lack of bite and attack. Compared to a Sony WH-1000XM3 which can be had for a similar price, they’re not as exacting or as aggressive. 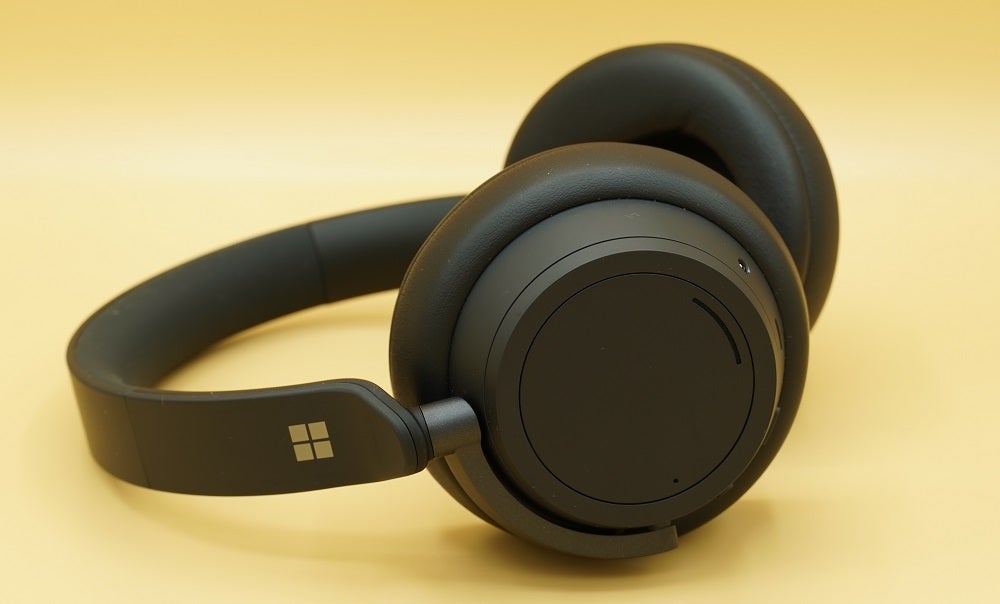 That also means they lack a sense of excitement. Volume levels need to be pumped up to coax more excitement, and even though there’s no distortion at higher levels and it wrings good detail out of the midrange, the playback almost holds you at arm’s length at times.

That said, stream in aptX and the warm character becomes more neutral. Bass is still somewhat timid in its application, but whether it’s a FLAC file of Country Girl from the Wild Rose soundtrack or streaming a Tidal Masters track and there’s added detail and improved dynamism to lap up. Despite some caveats, whatever you fire at the Surface Headphones 2 sounds enjoyable. For that it’s hard to dismiss what Microsoft has achieved.

The noise-cancelling is terrific, and Microsoft has made a smart choice in bringing the Surface Headphones down in price. In and around that price point it’s one of the best offerings.

You should buy the Microsoft Surface Headphones 2 if…

The Surface Headphones 2 have a very smooth and appealing sound, especially with its rich midrange performance.

The rotating dial mechanism is superb. We wish all headphones were this easy and intuitive to use.

The ANC here is fantastically good. It’s easily one of the best headphones on the market for this.

You should buy the Microsoft Surface Headphones 2 if…

While we like the sound, low frequencies are treated with a softness/tubbiness that makes them register in a rather meek way.

Dynamically there’s room for improvement. The smoothness of the sound makes the Surface Headphones 2 less of a vigorous, exciting listen.

It’s not that the battery life is on the low side, but that the headphones guzzle it up with alarming speed. Long listening sessions go by quicker than you might expect.