Though you probably wouldn’t think it now there was a time when Microsoft was one of the big players in the gaming hardware market. I remember fondly whiling away the Christmas holidays in 1998 with my brand new SideWinder joystick; kicking the proverbial at F16: Fighting Falcon if I recall correctly.


Sadly, for reasons best known to itself, Microsoft’s hardware division chose to let the SideWinder range die off much to my, if no-one else’s, disappointment. Xbox 360 aside, the only gaming peripheral the company produced for as long as I can remember was the Habu mouse – and that was just a re-branded Razer.

You can probably imagine, then, that I was rather pleased when I received an invitation to the event that would see the launch of the Sidewinder mouse, last year. Alas, the product didn’t quite live up to my expectations, but it was a sign of things to come. Indeed a few weeks ago I got my hand on the latest iteration of that mouse, the SideWinder X5, as well as a keyboard the SideWinder X6 – the latter of which I just so happen to have in front of me now.


The important question, then, is does the X6 impress more than last year’s Sidewinder mouse? The short answer is “yes,” and the long answer? Well, you’ll just have to keep reading. 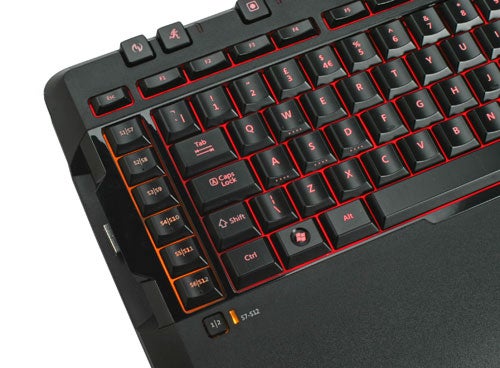 Aesthetically, I’m still not entirely convinced by the X6, in one area in particular. While I do like the red LED-backlighting of the main keys and, indeed, the orange of the macro buttons, I can’t say I like the two large knobs on the top of the keyboard used to control the brightness of the backlighting (left knob) and volume.


On the subject of design, it would be extremely negligent of me not to mention the keyboards numpad. Not normally a feature of interest (either there’s one or there isn’t) Microsoft has come up with the clever idea of allowing that particular keyboard segment to be removed and attached to either side of the keyboard’s main section. 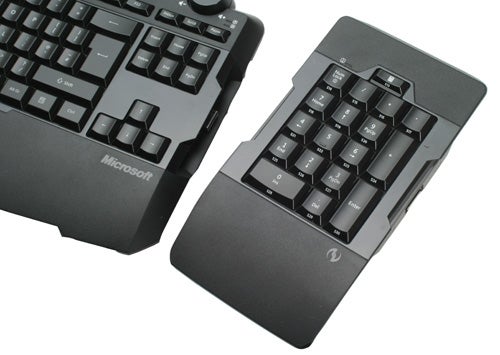 The benefits are twofold in that not only does it make the X6 a godsend for left-handers frustrated by the usual right-hander friendly placement of almost every other keyboard’s numpad, but it also allows macro functions to be assigned to the numpad without having it a mile away from the WSAD keys most commonly used by gamers.


A button at the top of the board toggles the numpad between ‘normal’ and ‘macro’ modes manually, or into ‘auto’ mode, whereby on the right side the numpad is just that, but moving it to the left turns on macro mode automatically. Combined with a set of dedicated macro keys on the left edge of the X6, a toggle button turning each macro button into two and an on-the-fly recording option, this makes the SideWinder X6 a compelling option for those gamers who prefer to script their game inputs rather than perform them manually – I’m looking at you WoW players.

There is, of course, more to a keyboard than simply chucking a load of keys at a lump of plastic. The SideWinder X6 definitely isn’t what you’d call ergonomic. If you’re a fan of split keyboards (which I can’t stand but half the TR staff swear by) the X6 isn’t for you. In both regular day-to-day use while working and for gaming I found the X6 no more or less comfortable than my first-gen Logitech G15, indisputably the gaming board of choice of its generation. 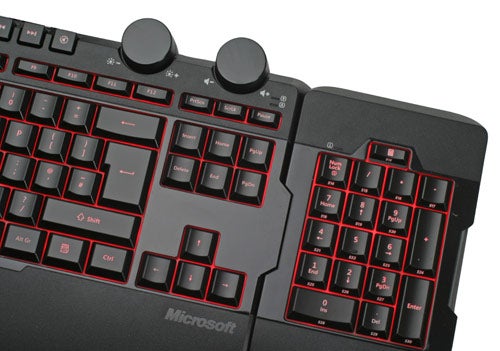 In terms of general ‘feel’ though, the X6 is a much nicer keyboard to use than Logitech’s. Each key has a resounding and pleasingly tactile action accompanied by an audible click, which I rather like, that wasn’t loud enough to distract while ‘testing’ the board in both the PC version of Brothers in Arms: Hell’s Highway and the Source mod Zombie Panic.


Perhaps more useful in-game is the X6’s cruise control function, which allows up to four consecutive key presses to be continued ad-infinitum until the button is pressed again. It’s probably worth pointing out that macro functions can’t be cruise-controlled. Also of note is the lack of built-in memory, meaning gamers who wish to use macros at, say, LAN parties will need to remember to bring their scripts on a USB drive or re-record them at every new PC. 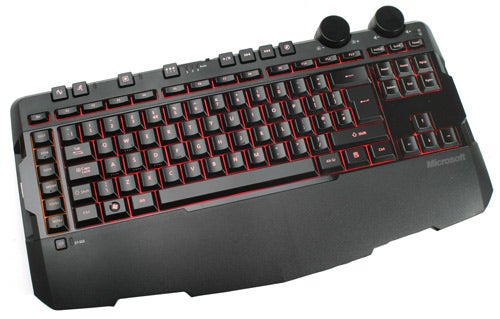 If I’m honest, I can’t say I found the ability to use the numpad as a bank of macro keys particularly useful in any game I played, not being a fan of MMORPGs. If my use of Adobe Photoshop consisted mainly of cropping and resizing images, I could definitely see some appeal, and I’m sure many other applications (and users) could reap the benefits of having dedicated macro keys at their disposal. I should point out, though, that to use these extra features the Intellipoint software has to be installed on your PC. If not you’ll be stuck with nothing more exciting than a bog-standard keyboard with a few media keys. 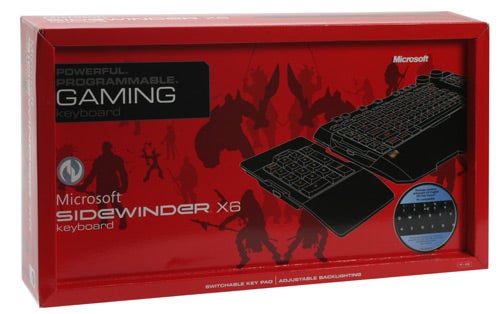 With the SideWinder X6 sitting at the same £50-ish price point as Logitech and Razer’s nearest equivalents, the G15 and Lycosa, Microsoft couldn’t get away with offering any less functionality – which it doesn’t. And as gimmicks go, a removable numpad is definitely of more practical use than an LCD screen or the ability to use any key to activate a macro. Add in the fact that the SideWinder X6 is the nicest one to type on and it’s a pretty clear-cut choice.


Microsoft’s SideWinder X6 is a fantastic return to form for the company. It feels great to type on, has as much macro-ing functionality as anyone will ever need and the ability to swap the numpad from left to right is a real masterstroke. If you’re in the market for a gaming keyboard right now, this is the one to get.