Historically, Microsoft’s dominance in the market used to create an almost continual rumble of disquiet but over the past few years that righteous indignation seems to have tailed off. When it comes to Microsoft’s Media Center Edition 2005 you’ll get no complaints from me about that as it’s easily the finest ten-foot media interface around. Much to the amusement of my less geeky friends I’ve had a PC under my TV in the lounge for several years in one form or another, but it’s never been more pleasurable to use since I built an MCE 2005 system.

In fact the chief benefit is not the interface, great as it is, but the MCE remote control. The works so well, and ties in so nicely with the interface that it makes having a PC for viewing videos and pictures that bit more practical. The thing is that it’s still a PC you’ve got under your TV and sometimes you need a keyboard and mouse to access it especially if you want to do PC-like activities such as sending email and browsing web pages.


While there are plenty of wireless keyboards and mice out there I’ve been using wired devices, which to be honest looked pretty lame with wires trailing. So when I heard that Microsoft was releasing a wireless keyboard, custom designed for MCE I was very eager to get hold on one. The only thing that surprised me was that it took Microsoft so long to actually bring one out.


When you remove the keyboard from its rather funky looking packaging you’ll notice that unlike most wireless keyboards it doesn’t come with any dongles to connect to your PC. This is because to use the keyboard with your PC you need to already have the USB MCE dongle. If you have a pre-built MCE machine you’ll already have this but if you’ve built your own MCE machine and for some reason don’t already have the dongle you can buy it separately in a bundle with the MCE remote control. Scan are selling this right here for £23.49.

My system was already set-up with the remote and dongle and all the latest patches, so as soon as I inserted the supplied four AA batteries the keyboard worked straight away without me having to install any drivers at all. Sweet.


The battery compartment cover was bit fiddly to remove but inside there’s a very secure housing for the batteries, which is good. The keyboard has rubberised rest pads on the underside which makes it comfortable to grip when you hold it.

What I noticed straight away about the keyboard was how compact and light it was. Cleverly, the keys especially designed for navigating Media Center 2005 fall under the thumbs on either side of the keyboard, and as it’s so lightweight it’s comfortable to pick up and use whether standing or sitting.


It’s slightly narrower than a full size keyboard and much less high. The keyboard is similar to that used on laptops with low profile keys. All the keys are very neatly arranged and fortunately none are too out of place with the delete key next to the backspace key and Page Up and Down running in a line on the right hand side. The Windows key is even present and correct. 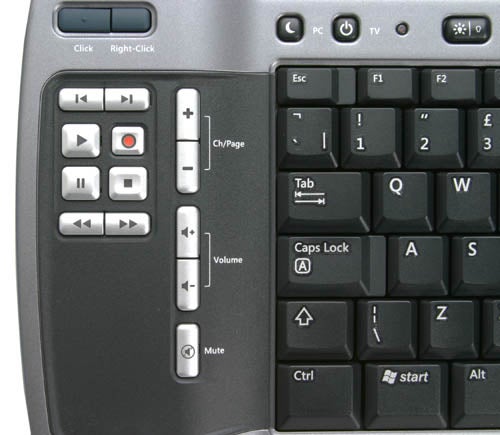 The keys themselves are fine to type on, and I managed to type this review using the keyboard without any problems, though I did have to ensure that the sensor on the front was in line-of-sight with the receiver to avoid any missed key presses.


The classic small green MCE logo adorns a dedicated button on the right but you don’t have to press it to launch the software, you can press one of the ‘My’ folder buttons, (Music, Radio, Pictures, Videos and TV). Accessing live TV, recorded TV and the Guide is accessible from buttons on the right hand side. There’s even a button for launching Messenger, should you feel the need to chat to people online while within the Media Center. 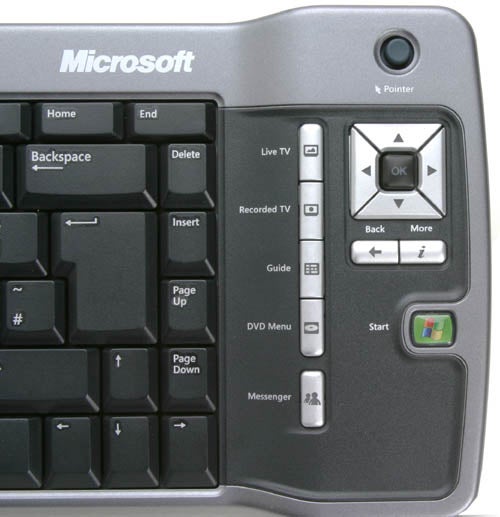 On the left is a volume control buttons. Outside of Media Center this controls the Windows volume. Unfortunately, the volume up button didn’t work on my review sample. To the left of this are controls for fast forwarding and rewinding. Essentially if it’s on the remote, it’s on the keyboard too.

To navigate Windows a ‘nipple’, for want of a better word, is integrated in the top right. The left and right click buttons are on the left, while you move the nipple in the right, so you can move the cursor around and click at the same time. Unfortunately, the pointer proved to be the weak spot in the keyboard’s armoury. I found that I could get the keyboard to either move incredibly slowly or zoom crazily across the screen, without a lot in between. I’d still recommend keeping a USB mouse handy for those moments when you need to do more intense maintenance work on the system. Beneath the ‘nipple’ is a four directional keys for navigating Media Center and there are dedicated buttons for shutting down the PC and even your TV. 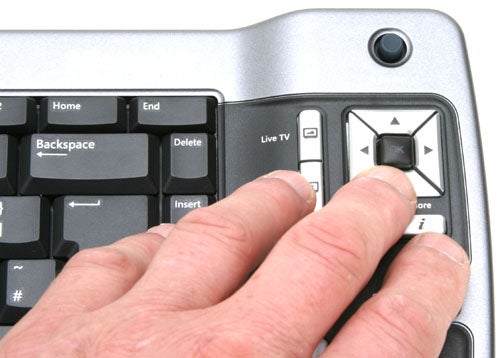 When your fumbling around looking for the buttons to press, you’ll appreciate the fact that there’s a cool orange backlight for the keys at the side, though not the main keys in the center. However, to activate it you’ll still have to find that button in the dark – a dedicated switch to have it on or off by default would have been good.


Generally the keyboard felt solid and well built and it’s black, grey and silver livery mean that it won’t look too ‘computery’ for those who want a home cinema look in the lounge than an office.


When first announced the recommended price was an over-the-top £100. Fortunately, the market seems to have been a bit more realistic and it’s available at Scan for a much more affordable £38.76. 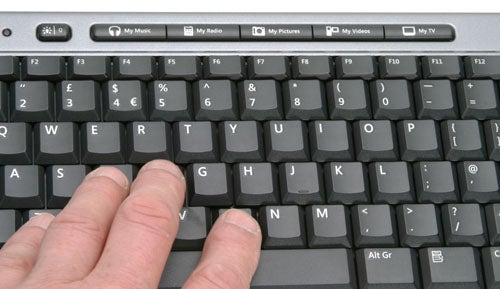 At that price, it’s something of an essential purchase for anyone wanting to build a MCE 2005 system.


The Microsoft Media Center keyboard is well built, neatly laid out, comfortable to type on and affordable. The ‘nipple’ pointer could do with some refinement but that’s the only downside to a great piece of hardware.